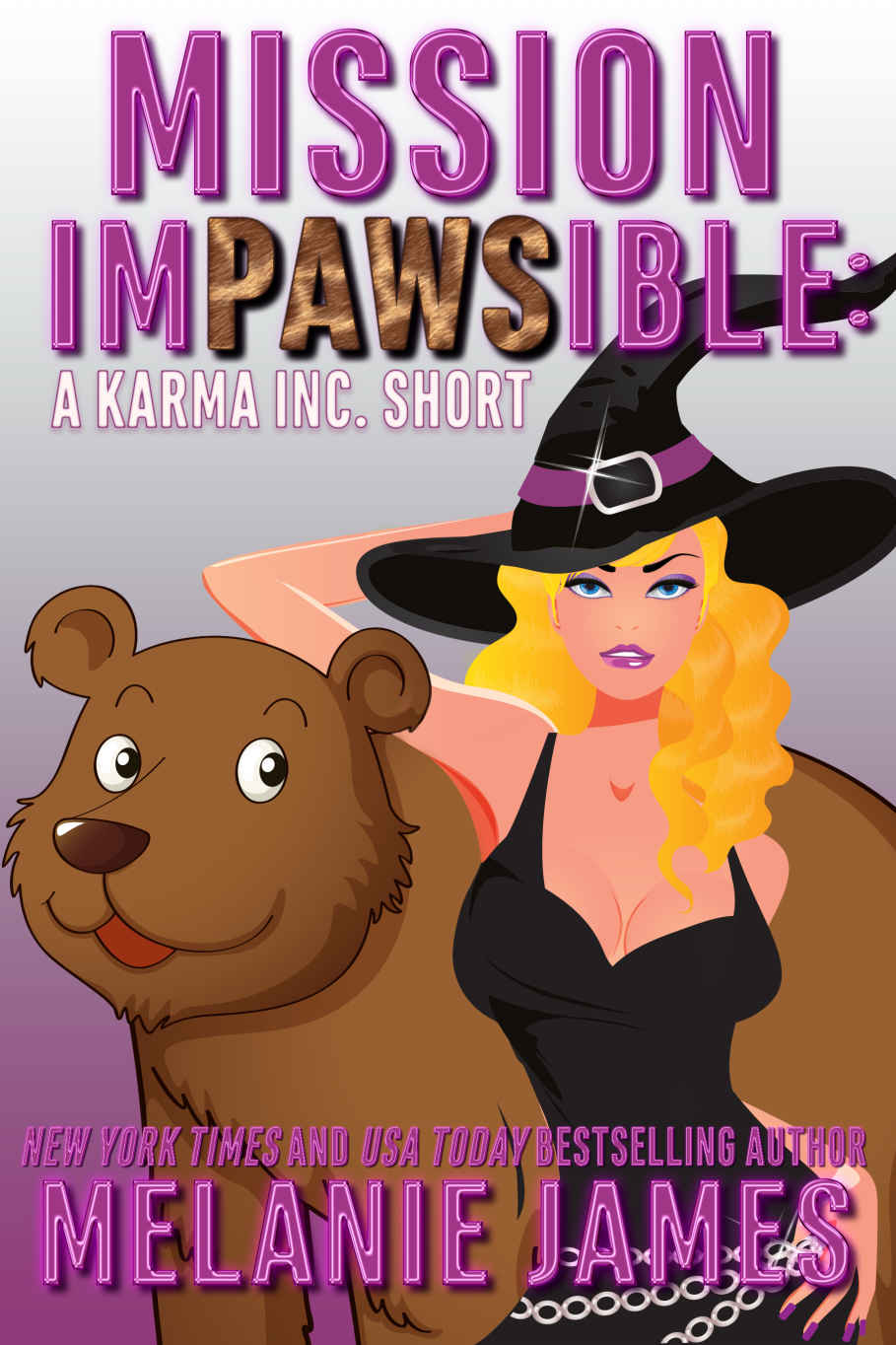 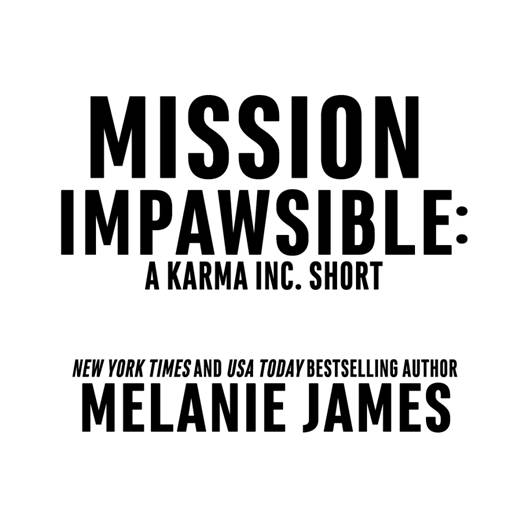 Everything happens for a reason, even if it’s caused by incompetence.

What happens when you take one very powerful wand, crack open an ancient spell book and mix thoroughly with a pair of inexperienced witches? For Kelly and Randy it’s a spell gone wild. With no idea what sort of magical mayhem they’ve created, they have to choose between waiting for the Witches Union to hunt them down or take their chances with a life on the run. But there is another choice, to figure out the spell and try to undo it before it’s too late.

When Kelly learns her spell has direct consequences on her were-bear boyfriend, she has no choice but to gather up the witches of Karma, Inc for a new adventure. The gang will take on a new cast of troublemakers in paranormal-infested Caldron Falls. It’s up to Kelly to see if she has what it takes to lead her crew of witchy buffoons on a Mission Impawsible to save her were-bear.

This e-book is licensed for your personal enjoyment only. This e-book may not be resold or given away to other people. If you would like to share this book with another person, please purchase an additional copy for each person you wish to share it with. If you’re reading this book and did not purchase it, or it was not purchased for your use only, then you should delete it from your device and purchase your own copy. Thank you for respecting the author’s work. Illegal copies come with fine up to $250,000.

Rebecca — Your covers continually amaze me.

Hollie — Eeeep! Here’s another one for you.

Tammy — Thank you for always being in my corner.

Monkeys — I love you!

Ron — You are my life

For all of your impossible missions in life. Have fun, make the best of it! AND don’t forget to laugh!

W
e’ve all had one of those deep conversations where we’ve done a poor job articulating a great topic to the wrong audience. For my case in point, it was a discussion I had with my friend, Gertie, a few weeks ago.

“Gertie, do you ever feel like you’re searching for a place? I don’t exactly mean a physical place, but I suppose it
could
be. Maybe it’s just a mindset. Anyway, it’s where you would not only feel comfortable, but truly in your element. You just feel drawn to something, but not quite sure what it is, only that it’s where you need to be. A place where you’ll find your strength.”

“Now you sound just like that woman I met last year, over in Biloxi. She tried to sell me a timeshare, whatever that is. I have no idea. Are you getting into the timesharing business, Kelly? By the way, can you share time? Can you even make time?”

“No. Not at all. I’m talking about philosophy, not vacation property. Anyway, the Spanish have a word for what I’m talking about—querencia. It’s a concept, a place where everything fits together. It all makes sense, and no matter what life throws your way, you can handle it without batting an eye. In
Death in the Afternoon
, Hemingway uses bullfighting to explain the metaphysical concept of querencia. The bull, in time, develops a sense of where and what his querencia is. If the bull finds his querencia in the ring, he becomes impossible to defeat.”

It was my fault, really. I’m an English teacher, and I habitually fall back on literature during my philosophical ramblings.  My audience, Gertie, only heard “bullfighting.” She blew a gasket.

“That cruel Hemingway! Bastard! Bullfighting? It’s called murder, Kelly. Plain and simple. Don’t listen to those murdering bastards. You don’t need to kill a bull to find your strength. All you have to do is just tell yourself four words. I CAN DO THIS. That’s it. No more, no less. None of that fancy querencia timeshare stuff. Don’t go analyzing it. And never, ever, go bullfighting.”

So, that’s how the conversation went. Later, I realized Gertie was absolutely right. I didn’t need to find anything. I just had to convince myself of those four words.

R
andy poured a cup of coffee and brought it over to where I sat. “Here you go, sis. I don’t know why you insist on staying in this bland, empty condo.” His head swiveled back and forth, closing his eyes like he wanted to forget what he saw.

Clearly, my brother had mood poisoning when it came to my current living conditions. Unfortunately, he droned on, voicing his concerns.

“And it’s so… spartan in here. Yuck. It’s so blah… and so unlike you. Would it kill you to have a few decorations? Maybe a picture on the bare walls? Something?”

I shrugged. It really didn’t matter to me. With my current state of mind, decorating a place I had no desire to stay in was the last thing on my agenda.

“You know, with your share of the first quarter earnings from Karma Inc., you could really step into the high end of the housing market. And I could… no, I
will
be your interior designer. I would’ve picked up a few things for you, but Gertie and I have already blown our shares on our Paranormal Bed and Breakfast project.”

“I’ve considered moving, but most of mine and Ezzy’s money is going toward restarting the Karma Inc. Reality TV show. Even if it wasn’t, I don’t know what I would do. I used to know what I wanted. Well, kind of. I was happy being the modern, independent, single, newbie witch. Taking numbers, crushing hearts. It was my thing. Now, not so much. My goals are all outta whack. I guess I’m just waiting to see how things play out in the near future. Who knows? Ever since… ”

“Ah ha! Ever since that hunk of a werebear got his paws on you! Am I right?”

I hesitated, giving my brother the perfect opening. Damn. “Right. Meeting Gabe, falling for him, was so unexpected. So perfect. Until September rolled around. Now I’m back here, teaching. Yippee!” My sarcasm was not lost on Randy.

“I’m stuck in Chicago and he’s up north in the woods. I’m barely surviving traffic and teaching English to kids who are more interested in texting than learning the mechanics of grammar. Gabe’s catching poachers and being all sorts of super masculine at his log cabin. I bet, right now, he’s chopping firewood and whatever.”

A nearly X-rated video of a shirtless, sweaty Gabe played in my mind. His muscles flexed under glistening coppery skin as he lifted an axe above his head. The axe came down in a powerful and very satisfying stroke. I could actually feel the axe finding its mark. The strike caused something inside me to twitch with excitement, like an electric shock.

“Hello? Kelly? You’re drooling. Are you all right?”

“Ha! I see what’s going on here. You’re fantasizing about Gabe. You are such a little pervert. Seriously, sis, he was a summer fling. Don’t get your panties in a bunch. Go over to the LL Bean store and pick up one of those lumbersexuals. I’m sure you can find a short-term substitute for Gabe. It’ll help you to get over him.”

“What? Wait a second. First of all, I never said I wanted to get over him. Secondly, that’s the dumbest advice I’ve heard from you. And that says a lot.”

Randy didn’t even have a comeback because he knew he hit a nerve. I’ve never once had even the slightest bit of desire to “get over him,” as Randy’s unsolicited and poorly thought-out advice suggested. In fact, I secretly hoped for much more of a future with Gabe than I let on. Since I came home, Gabe and I talked on the phone nearly every day. And as each day passed, I began to dream about the possibility of a happy ending.

For now, it was time to change the subject. Halloween was only a week away, and it made the perfect topic.

“Randy, what are your memories of Halloween when we were kids? All of mine are tinted with orange and black. I always remember making construction paper jack-o-lanterns with too much glue and those goofy legs our teacher made us put on them.”

“Yeah. I remember making those. Legs and arms made with black paper, folded accordion style. Wasn’t that stupid? I used to wonder why. I mean, jack-o-lanterns do not have legs and arms. They just don’t.”