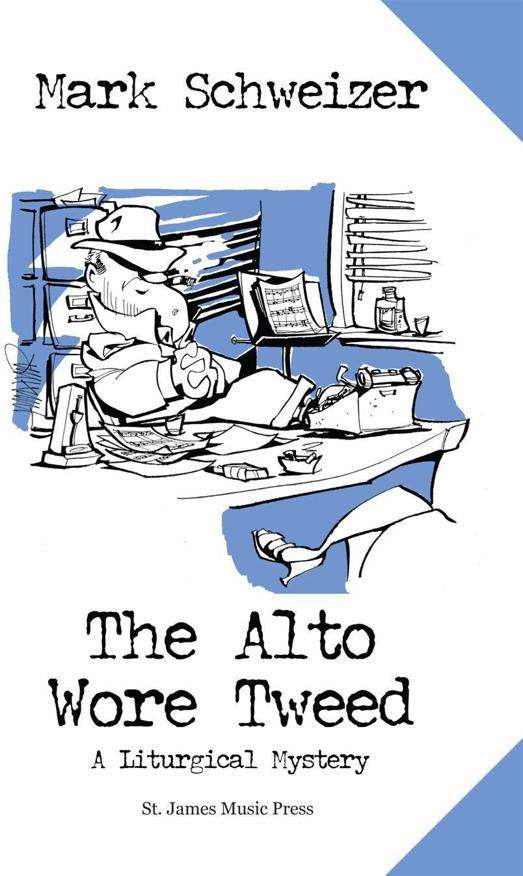 All rights reserved. No part of this publication may be reproduced, stored in a retrieval system or transmitted in any form or by any means electronic, mechanical, photocopying, recording or otherwise, without the prior written permission of the publisher.

Elroy Willis —
Religion In The News (used by permission)

The UPS delivery man arrived at 4:37 p.m. I had taken the afternoon off so I wouldn’t miss him since missing him would mean a trip into Boone, standing in an interminable line—something I particularly detested—and presenting my little yellow ‘sorry-we-missed-you’ tag to the indifferent clerk who would then spend half an hour looking for the package that was probably, by that time, back on the truck. It was my fault really, since I failed to have the shipper check the ‘no-signature-required’ box. Added to that, I really didn’t mind taking the afternoon. It was too nice a day to be solving crime, what little there was in St. Germaine, and I was, after all, the boss. So when the UPS man showed up, I was there and happy to meet him at the door.

“Nice day, Hayden,” he said, handing me the flat brown box for my electronic John Hancock.

“It is indeed,” I said, noticing and appreciating again the warm fall day—the rapidly dropping humidity being the only hint of the cool weather forecast that would arrive after the sun dipped behind the blue haze of the mountains. The ever-present scent of the native fir trees seemed to be especially pungent when carried on the back of the first autumn chill and I took a deep breath, savoring the day like I might savor a good liverwurst sandwich and a bottle of imported beer — my snack waiting in the kitchen. I had all the windows and doors of the house open, trusting that with this cold front, bug season was now at its end.

I handed the box back, trading him for the package from Christie’s Auction House via Philadelphia. “Thanks, Shawn,” I said turning back into the house. “Have a good day.”

“You too,” he said perfunctorily, now busy pushing buttons on his box as he walked back to his truck.

I went into the kitchen and opened the package on the table to the sounds of the brown diesel delivery truck pulling out of the drive and heading down the road.

Inside was a typewriter. Not just any typewriter, but Raymond Chandler’s 1939 Underwood No. 5. I had seen it come up in an on-line auction and had determined to get it. Underwoods weren’t rare—but this one was special.

My reason for getting the typewriter, other than its obvious collector appeal, was to finally put to paper my own detective serial novella—an episodic mystery featuring a church choir director-turned-detective, written in the classic 1940’s whodunit genre. In my opinion, there hadn’t been a good Philip Marlowe-style mystery since 1958—the year of Chandler’s last novel,
Playback,
which I had read at least four times. When he died in 1959, he left four chapters of
Poodle Springs
, but we purists don’t consider the finished book a true measure of the Chandler craft. It was Ray Chandler who penned such immortal lines as:

“
She’s a charming middle-aged lady with a face like a bucket of mud and if she has washed her hair since Coolidge’s second term, I’ll eat my spare tire, rim and all.”

And:
“The eighty-five cent dinner tasted like a discarded mail bag and was served to me by a waiter who looked as if he would slug me for a quarter, cut my throat for six bits, and bury me at sea in a barrel of concrete for a dollar and a half, plus sales tax.”

And perhaps his most famous:
“It was a blonde. A blonde to make a bishop kick a hole in a stained glass window.”

Sure, I could write my book on a computer. I had a couple of Macs at the house and a new iBook I was planning on taking to work, but really, what fun would that be? This was the real thing and I was feeling more than just a tingle of anticipation.

I set the old typewriter and the case of replacement ribbons that accompanied it on my desk. After I had purchased the Underwood, I had Christie’s send it to a gentleman in Philadelphia who specialized in refurbishing old office equipment for collectors. It had been overhauled, oiled, fitted with a new ribbon and was now, I hoped, ready for action. I took a second to peruse the “certificate of authenticity,” and then, holding my breath, I put a piece of 24 lb. white bond into the carriage and clicked the return until the edge of the paper appeared behind the hammers, slowly creeping around the roller, and finally emerging into the yellow light of the old green shaded banker’s lamp I had set on the desk to complete my nostalgic foray into the Golden Age of Detective Literature. I stood and admired the typewriter for a long while. Still standing, my fingers reached for the well-worn keys and I typed

I walked over to the kitchen and collected my beer and sandwich. Then, sitting at the desk, I picked up my well-worn first edition of “Farewell My Lovely” and turned to aamiliar, dog-eared page.

Hoping some of the Chandler magic would rub off, I started typing.

“
Marilyn,” I snarled over the phone, “did I pick the hymns this week?”

“
Maybe you mixed up the numbers. I don
’
t think I would have picked
‘
Just As I Am
’
for the processional.”

I could just see her, smugly peering over her large secretarial glasses, her nimble, well-manicured fingers tapping a tarantella on her word processor. She hadn
’
t been much help since the case of “The Soprano Wore Red,” but I couldn
’
t let her go. She knew too much. She held all the cards and they were coming up aces.

I figured she switched the hymn just to make me look bad. She didn
’
t do it often. Just enough to keep me in my place. At least she could make a good cup of java.

“
Light me a cigar and come up here a minute,” I said.

“What’cha doing?” Meg asked, as she came into the room.

“Working on my mystery.”

“Well, don’t quit your day job,” she admonished, offering the time-honored advice given to all aspiring writers as she ran her fingers down my spine and continued to read over my shoulder.

My “day job” happened to be police detective. Megan Farthing was my significant other, and the town beauty as far as I was concerned. I met her about three years ago, right after she had moved to town. I was off-duty at the time and on my way home in my 62 Chevy pickup for a night of Bach and grilled knockwurst when she went by me like a bullet. I flashed my blue lights, hit the siren and pulled her over a few blocks later.

“What kind of police car is
that?”
she asked, pointing to my old truck and turning on the requisite tears. “It’s not really fair, is it?”

“Nope. Not fair at all. But it’s a slow night. Although
you
seem to be in a hurry.” I noticed the new license with the St. Germaine address. “You’re new in town?”

“Slow down,” I said, handing her license back to her. “It’s just advice this time. No ticket.”

The sniffling stopped almost immediately and I, once again, had to admire the female gender’s ability to regulate the flow of tears in direct proportion to their chances of receiving a traffic summons.

“Are you Hayden?” she sniffed, wiping the remaining tear from her cheek and catching me totally by surprise. “My mother said I should meet you.”

I didn’t know what else to say so I ventured an invitation. “Would you like to join me over at the cafe for a cup of coffee?”

“As long as it isn’t viewed as some sort of police bribe for not getting a ticket.”

I laughed. “I don’t even have a ticket book. But don’t tell anyone.”

Two espressos and a couple of The Slab Cafe’s beignets later, I was interested enough in extending the evening to invite her over to my place for my weekly Knock ’n Bach. The Knock ’n Bach is my standard operating procedure for staying off the dating schedule. A few ladies have attempted it, but they usually didn’t last past the
Credo
of the
B minor Mass
and by now I had garnered a local reputation as a very boring date. As a result, I had not been actively pursued by the available women in St. Germaine. Still, I had a feeling this gal was different.

“Hmmm. I like knockwurst and the sauerkraut is a real plus. How’s your sound system?”

She nodded thoughtfully. “I’d like to hear those speakers. What’s on the music program?”

“
Cantata 140
and the
G-minor Organ Fugue
followed by some Leon Redbone.”

“God, I just love 140. The whole introduction with the three oboes and everything just sends chills up my spine.”

“Yeah?” My eyes narrowed and I studied her expression. She could be bluffing, but I didn’t care. “C’mon then.”

It turns out she
was
bluffing, but she had sung in the Concert Choir in college and was paying enough attention in Music Appreciation 101 to fake it pretty well. I was pretty sure it was all she faked. The evening was a complete success. I was charmed by big blue-gray eyes framed by shoulder length black hair, and a figure, as they say in the South, “that would make you slap yo’ mama.” She’s also a sharp investment counselor and a pretty darn good soprano. Lord knows, those are few and far between and worth their weight in good cigars. Sopranos, that is—not investment counselors. Megan doesn’t have a solo voice exactly, but it’s right on the money for choral singing and she reads like a fiend. I’ve always said I know a good soprano when I see one.

I pulled my fedora low over my eyes and a sneer played across my lips as I opened the hymnal looking for an old favorite containing sound theological doctrine. They were there, all right. A few of them, but they were hard to spot. Lurking in dark Bach chorales, hiding inside dimly lit Renaissance carols, stashed neatly away in the Old Scottish Psalter. It was my job to ferret them out. Sometimes, I thought to myself, it pays to be a professional.

Meg and I’ve been keeping company since then and have become something of an item. She keeps track of my investment portfolio—such as it is—something she can do on-line from her home office. She lives with and cares for her mother, which is her reason for being in St. Germaine in the first place. That, and having no real place to go after her divorce. Meg is smart, beautiful—and apparently an amateur literary critic.

Call Her Mine by Lydia Michaels
Fortress in the Eye of Time by C. J. Cherryh
Key the Steampunk Vampire Girl and the Dungeon of Despair (9780989878531) by Becket
The Fall of Lord Drayson (Tanglewood Book 1) by Rachael Anderson
Moonkind (Winterling) by Prineas, Sarah
Coffee, Tea or Me? by Trudy Baker, Rachel Jones, Donald Bain, Bill Wenzel
Choices by Ann Herendeen
A House Divided (Astoran Asunder, book 1) by Nicole Ciacchella
The Hellraiser Films and Their Legacy by Kane, Paul
The Pirates of the Levant by Arturo Perez-Reverte
Our partner