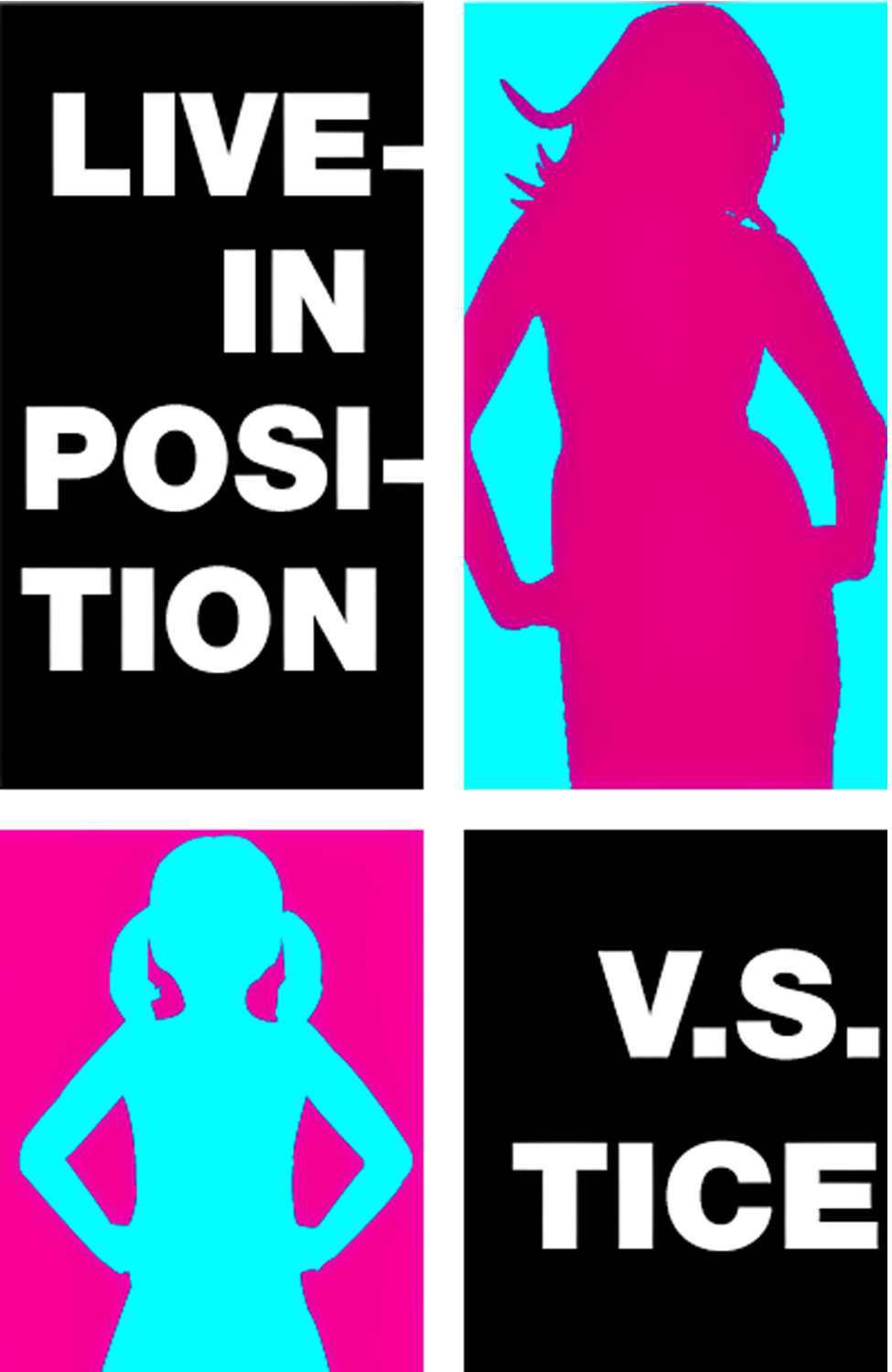 Sugar Land, TX 77496
http://www.48fourteen.com
This is a work of fiction. All of the characters, organizations, and events portrayed in this novel are either products of the author’s imagination or are used fictitiously. Any similarity to actual events or people, living or dead, is entirely coincidental or are used ficticiously.
Live-in Position.

Novel Edited by Kate Wright.
All rights reserved including the right to manufacture in any format, sell, or distribute copies of this book or portions of this book.

My
husband,
my
Antichrist.

Without you, this story would

never have come to life.

I GLANCED FROM the road to the Map Quest directions as I drove from Tacoma to Seattle—First Hill to be exact. My phone rang.

“Sophia, are you on your way?” Miranda whispered.

“I just got off Exit 172 and should be there shortly. What’s wrong?”

“Everything,” she groaned. “He finds something wrong with every single one of them. This is your chance to run while you can.”

“Then what? You’ll get married and still live with the Bishops? I don’t think Benji will like that too much.”

“I’ll be there soon.” After closing my phone, I picked up speed. My Jeep was old but reliable, though I couldn’t push it much harder. Turning onto 12th Avenue, a perfect tree-lined street welcomed me. Through the trees I could see a few visible houses—a glimpse of large windows encased in stone or brick and some clay tiled roofs peeking between the large evergreens that were meant to offer the rich privacy.

“Crap!” My sightseeing made me miss the hidden driveway.

Pulling to a stop and climbing out of the car, the house loomed over me. It wasn’t like the homes I’d worked in before, the ones that always felt homey—children’s toys in the front yard, a swing set placed near the house. This yard offered, as far as my eyes could see, neatly trimmed bushes, carefully plotted shrubbery and greenery, along with grass cut with perfected lines. My nerves collected in the pit of my stomach as I approached the front door.

“Rand wasn’t lying,” my words echoed around the vast driveway.

Before I could knock, Miranda opened the door looking flustered. She pulled me in for a quick hug. “Brace yourself.” Her whisper tickled my ear. Squeezing my hand gently, she stepped back and showed me to the large dining room.

Nodding slowly, I took in his appearance. He was at least a foot and a half taller than me. Height matched with the broadness of his shoulders, he was definitely swoon-worthy. I wondered why Miranda hadn’t mentioned how beautiful he was before.

There was a small shock at our touch as his long fingers wrapped around my hand. The feeling shot to the pit of my stomach.

“Sorry,” I mumbled, pulling away quickly.

“Yes, well, let’s get started, shall we? Please take a seat.” Dr. Bishop motioned to a chair across from Miranda. I sat down and clasped my hands on the table in front of me, still trying to rid myself of the lingering effects of his touch.

“Looking through your resume it seems you’ve only had one live-in arrangement, and it was for an infant.” He looked up from my information for confirmation. “You do realize this is a live-in placement with a six year old child?”

“So your other placements have been daily arrangements on an intermittent basis?”

“Yes, mostly for mothers who were just returning to work and needed something until their children started school.”

He looked at me intently.

I’d seen his pictures in many magazines, but somehow they didn’t do his appearance justice. Those printed works did nothing to convey his smooth skin, high cheekbones, strong jaw, and pale red lips that weren’t full, but they weren’t too thin either. Then there was his hair. In photos, his auburn hair was always rather tame, but in person it was an unruly mass fighting against his frosty, calm, collected mannerisms I was witnessing today.

“And you prefer that type of arrangement?” He eyed me closely with his hard green eyes.

“Well, I did. However, that was while I finished college. Now that I have –”

“So you plan to do nothing with your college education?” His face shifted into a look of disapproval.

Instead of cursing him out with a dose of “to hell with you, mister,” I collected my thoughts before I answered. “I intend to use my childcare experience and education while I’m employed. However, I also have a creative writing degree I’ll be putting to use as well. I would like to be a published author and believe I can work on this during my own time.”

“So, you have a degree in creative writing and childcare?” Confusion plagued his handsome but stoic face.

“I majored in creative writing, my passion, but as I got more involved with childcare I decided to minor in it.” I shrugged. “I also have certifications…in CPR, first aid, and –”

I stopped. A sweet, pale-skinned girl, with curly red hair and the roundness of a baby in her cheeks, entered the room. Her hair hung in large ringlets over her shoulders. With her blue and white striped dress, she reminded me of a porcelain doll. Nothing looked out of place on her. A small smile crept over my lips.

“Victoria, I’m busy at the moment. I will come see you later.” He didn’t bother to look at her during his dismissal.

“I apologize, Daddy.” Her face fell.

My defiant nature kicked into action. Standing, I walked over to her.

She looked around me toward her father. Her stiffened posture relaxed with a sigh of relief.

“Nice to meet you,” she responded quickly and gently shook my hand.

My knee protested against the floor as I knelt to her level. “My name is Sophia.”

“That’s a beautiful name. It’s nice to meet you, Victoria.”

A throat cleared behind me, and I made a silly face. Victoria hid her giggle.

“If you don’t mind, I have a schedule to keep,” Dr. Bishop snapped from behind me.

Winking at Victoria, I straightened back up to a standing position. “Sorry.” With an empty apology, I walked back to my seat.

Ignoring my compliment, he continued on. “This states you are familiar with three languages.” His eyebrow rose in challenge of my information. He was calling me a liar.

“Je me demande comment familier vous sont véritablement?” he sneered as he questioned.

I raised my eyebrow back at him, mimicking his earlier challenge. He lightly cleared his throat and glared. With a quick look at Miranda’s face, I could see the defeat. Clearly the interview was over.

“I believe you’ve already come to your conclusions about me, and in so doing made your decision, so if you would please excuse me.” Standing, I forced a smile and nodded to Dr. Bishop before giving Miranda an apologetic look.

A few steps away from freedom, a voice called out from behind me. “Are you coming back?”

I turned on my heel at the sound of Victoria’s voice. Standing on the staircase, she gave me a look caught between panic and excitement.

“Hey, there are other people to interview, so you have to give them all a fair shot.” I took the few steps to reach her. “Okay?” I lightly lifted her chin so she would look at me while I spoke. My heart broke at her disappointment.

She nodded, and I gave her a small smile before heading back toward the door. I ended up face to chest with Dr. Bishop. His scent, a mixture of crisp linen and cologne, filled my senses and made my stomach flutter.

“Victoria, please go to your room.” His voice was dismissive and stern.

Blinking a couple of times, his strict voice snapping me out of my current trance, I took a few steps back and around him, heading out the door. Once I was in my Jeep, I released the scream I’d been holding.

“Well, way to screw that up, Sophia,” I grumbled at my reflection in the review mirror before I drove away. Grabbing my cell phone, I quickly texted Miranda, apologizing for the way the interview had ended.

Hours later while sitting in front of the television with my father watching baseball, Miranda responded to say I was forgiven and hired. It took three readings of the text before it sunk in. Excitement coursed through my veins. I had a job and it was one that would allow me to bring my children’s book to fruition. Mid mental happy dance another thought dampened my mood.

I would be subjected to the Antichrist’s utilitarian demeanor on a daily basis. Crap!

“Do I even want to know what’s going on in that head of yours?” My father pulled me from my musings.

“Do you ever really want to know?”

“No.” He looked back to his baseball game with a broad grin.

“You aren’t in my way, Soph.” He didn’t take his eyes from the television.

“Yeah right, now you don’t have to sneak Carla into the house anymore.”

He finally looked at me, eyes wide and lips in the shape of a perfect O.

“You should so see your face right now,” I teased.

“Of course, the question is why you thought you should hide it from me. I’m happy for you.” I got up and kissed his forehead.

“Well, with your mother, I just…um…Thanks.” He sat a little straighter. “So, um, this new job, it’s a live-in thing?” My mom died five and a half years ago, and I knew my dad was concerned that I thought he was replacing her.

“Yeah, I’ll be taking care of a six year old girl, though her father could possibly be the Antichrist.”

“I’ll be sure to stop by the church and get you some holy water before you move out,” my father snorted.

“Good, I might need it. Can you see about a crucifix while you’re there?”

“I’ll ask Father Thomas what he can do.” My father’s large grin was endearing.

I kissed the top of his head again. “I’m going to bed. Good night!”

The next morning, I woke up to another message from Miranda.

I stretched out on my bed, listening to some of my cramped joints crack, and then called her back.

“The agency will be sending you the contract in a couple of hours, and once you get it, I’d rather you call me if you have questions, okay?”

“Is there something else?”

“Well, can you start in a week?” she asked quietly.

“I thought you still had three weeks with –”

“Technically I do, well I did. But…I figure I could have you here with me for a week to learn the routine and then, well I could cut out earlier than I had –”

“Wait, does the Antichrist know?”

A moment passed while she processed my question.

“The Antichrist?” she choked. “Yes, I talked to him already. Honestly Sophia, he isn’t that bad. He’s a little stiff and tense, but once you get familiar, you really won’t have much interaction with him at all.”

Brightly Burning by Mercedes Lackey
Evidence of Things Seen by Elizabeth Daly
El misterio de Sittaford by Agatha Christie
The Go-Go Years by John Brooks
Psychomech by Brian Lumley
Flee (The Aurora Lockette Series, Book 1) by Miranda Kavi
No Lasting Burial by Litore, Stant
End of Days by Max Turner
Confessions Of A Vampire by Donna Haley
Bad Juju & Other Tales of Madness and Mayhem by Jonathan Woods
Our partner