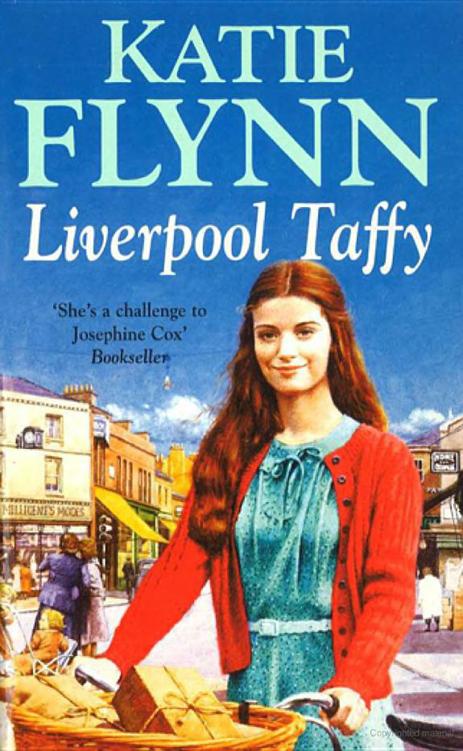 Katie Flynn has lived for many years in the Northwest. A compulsive writer, she started with short stories and articles and many of her early stories were broadcast on Radio Mersey. She decided to write her Liverpool series after hearing the reminiscences of family members about life in the city in the early years of the twentieth century. She also writes as Judith Saxton. For several years, she has had to cope with ME but has continued to write.

Life is hard in 1930s Liverpool, and Biddy O'Shaughnessy is left destitute when her widowed mother dies. Forced to work all hours for Ma Kettle, owner of the local sweet shop, she can soon take no more and runs away.

At first luck appears to be on her side. Sharing a flat with Ellen, an old school pal who has a special 'friend' paying the rent, keeps the wolf from the door. But fate conspires against them and Biddy finds herself homeless once more, living rough on the mean streets of Liverpool.

When she applies for the post of maid with the Gallagher family, Biddy starts to feel she might at last be able to lead a normal life. Especially when she meets Dai, a young Welshman working the trawlers. But Nellie Gallagher has a secret that will change all their lives..."

The Girl from Penny Lane

The Girl from Seaforth Sands

A Kiss and a Promise

A Long and Lonely Road

Orphans of the Storm

Beyond the Blue Hills

In Time for Christmas

Published by Arrow Books in 2000

Katie Flynn has asserted her right under the Copyright, Designs and Patents Act, 1988 to be identified as the author of this work

This is a work of fiction. Names and characters are the product of the author’s imagination and any resemblance to actual persons, living or dead, is entirely coincidental

For Margaret Campbell of Eastham, who understands better than most why I write these books;
thanks, Margaret

‘Poor but honest, that’s wharr I always say. Oh aye, we’re poor but honest, us Kettles. Well known fact, that. Pass us one of them big brown bags, chuck.’

Biddy O’Shaughnessy reached for the pile of bags on the little wooden shelf by the rear door of the shop and handed it across to her employer, who stood, stomach pressed against the small counter, grubby fingers clutching the small enamelled scoop, cracking a joke with Sister Eustacia whilst she weighed out forty tiny bags of peppermints and then put them, one by one, into the big brown bag bought specially for such customers.

‘That’s the last, Sister,’ Ma Kettle said, scrunching the top of the fortieth bag with a deft movement of her fat fingers. ‘And ’ow about a little extry one, eh, jus’ for luck, now?’ She slid a few peppermints into the last bag without weighing them, twisted the top and added it to the rest of the sweets in the big brown bag. ‘I don’t doubt you’ll mek good use of it, Sister Eustacia,’ she added piously. ‘Poor but honest, like meself.’ She turned to Biddy, hovering behind her. ‘Go and put the kettle on, Bid,’ she ordered. ‘We’ll have a nice cuppa, me an’ the Sister here, now we’ve completed our business.’

Sister Eustacia murmured a token refusal, whilst sitting herself down on the high stool which Biddy had towed round from behind the counter in readiness. It would have hurt Ma Kettle deeply had Sister Eustacia not accepted her invitation, albeit with pretended reluctance, and both parties – all three if you included
Biddy – knew it. So Sister Eustacia hauled herself up onto the stool, displaying several inches of grey woollen stocking and a pair of black lace-up boots in the process, and Ma Kettle squatted down on her own creaking wooden chair, hoisting her petticoats up as she did so and revealing, in her turn, a pair of extremely fat and dirty knees.

‘
Hexcuse
me takin’ the chair and givin’ you the stool, Sister,’ she said with a chuckle as she did every month. ‘But you’re the right shape for leapin’ aboard a stool, whereas it’s all I can do to gerron me chair come tea-time, when I’ve ’ad a busy day in the shop an’ me rheumatics start a-playin’ up.’

It was true that Sister Eustacia was tall and thin, but the idea of her leaping always brought a little smile to Biddy’s lips. The nun was so gaunt and serious! Still, both women were sat down so it was time she made the tea and brought it through, otherwise Ma Kettle wouldn’t half give it to her when her customer had left. Others wouldn’t come into the shop whilst Sister Eustacia was there out of respect, so every minute she lingered they were losing trade. Which did show that Ma Kettle wasn’t such a bad old stick after all, though one of these days, Biddy thought apprehensively as she measured a tiny amount of tea into the big brown pot, one of these days she’ll be struck dead for the lies she tells … poor but honest, indeed! Ma Kettle had been weighing her thumbs as well as her sweets for as long as she had been selling licky sticks and sherbet fizz, and that was a long, long time. Biddy’s mother remembered her own mother telling her to watch Ma Kettle’s fingers on the scale and that must have been at least twenty years ago.

‘Get a move on wi’ that tea, chuck,’ Ma Kettle shouted. ‘Me tongue’s hangin’ out like an Abrahams carpet on a windy day.… Sister’s fair parched, she telled me so a moment’s gone.’

There was a murmur from Sister Eustacia, but Biddy, standing in the little back room and ladling a spoonful of conny onny into each large, chipped white cup, ignored the nun’s polite disclaimer. Sister Eustacia would be on her way back to the convent with her shopping, she would have been out most of the morning and would doubtless be glad of a cup of tea.

‘Comin’ up, Ma,’ Biddy called back, therefore, arranging the cups on a small wooden tray and hurrying through to the shop. ‘Oh, drat, I forgot the biscuits.’

Ma Kettle gave her assistant an alarmed glare, but it was too late; Biddy, hurrying into the back room, chuckled to herself, but only under her breath. Sister Eustacia just loved biscuits, she could get through half a pound whilst Ma Kettle was sipping at her hot tea, and since Ma Kettle was fond of a biscuit too she usually ‘forgot’ to produce her tin until Sister Eustacia had finished her tea and was about to climb down off her stool. By then, of course, Sister Eustacia’s conscience would be prodding her about the length of time she had taken to buy forty ounces of mints for forty sweet-starved sisters, so she would hastily crunch down one biscuit, or possibly two, but would not stay to demolish the entire tin.

In the back room again, Biddy reached down the square biscuit tin with the picture of the Coronation of George V on the lid, then took pity on Ma Kettle and shook half-a-dozen Digestives onto a white pot plate. The old girl shouldn’t lie about her honesty or weigh her thumbs in with the kid’s sweets, but it was scarcely Biddy’s place to punish her. Biddy was fairly sure that Ma Kettle underpaid and overworked her, but at least it was a job and with an ailing mother on her hands, any money Biddy could earn was more than welcome. So she took the plate of biscuits through and was rewarded by Ma Kettle’s relieved smile when she saw the tin was
missing … though Sister Eustacia, poor thing, just looked pleased. A biscuit is probably a treat to her, Biddy thought, standing the plate on the counter top and then picking up her duster once more. Her own Mam loved a biscuit – not that she saw many of them, not since losing her job at the big department store in the city centre where she had risen to a top saleslady position because of her nice voice and manners.

‘Leave that, chuck,’ Ma Kettle said presently, when Biddy’s duster had reached the end of the shelf. ‘Get your coat.… Sister Eustacia would be glad of an ’and wi’ all that shoppin’. I can spare you for an hour or so.’

‘Thank you, Mrs Kettle,’ Sister Eustacia said gratefully, climbing stiffly off her stool and standing her cup down on the counter. ‘I do seem to have a heavy load today, Bridget’s strong young arms will be a great help.’

And I’m the right build for a dray-horse, Biddy said sourly, but once again, only inside her head. At fourteen she had her mother’s dark curls and blue Irish eyes but her body was a child’s still, unformed, skinny and fragile-looking. I’m not fragile, though, Biddy reminded herself sturdily, taking her thin jersey down from the peg on the back of the door. I’m all right with my own shopping, and fetching bags of sugar and that, but Sister Eustacia buys for forty – one of these days I’ll break my bloomin’ back carting her shopping right across the city and then up Mount Pleasant. What’s more, it doesn’t do my shoes much good, and I’m just bound to dirty me blouse and I doubt I’ll be able to wash it and get it dry until Sunday the way the weather’s been lately.

Biddy always wore her best things to come to work, though – Mam insisted. A white blouse which she had bought in St Marks jumble sale and a navy pleated skirt, which was more darn than pleat, looked well on her, a
good deal better than the quantities of skirts, petticoats, shawls and other swathings which covered Ma Kettle’s bulging person. Biddy didn’t wear stockings despite the fact that it had been a wet and damp September, for you had to be very rich to wear such things, but she had shoes – they had been Mam’s best until the racking cough had caused her to be given her cards because her head of department, Mrs Browning, said she was turning the customers’ stomachs, spitting into her handkerchief the way she did.

A Very Russian Christmas by Krystal Shannan
Gregory's Game by Jane A. Adams
The Dangerous Years by Richard Church
Ram; being the tale of one Ramillies Anstruther, 1704-55 .. by Taylor, Winchcombe
Cherishing You by JoRae Andrews
Unborn by Natusch, Amber Lynn
Binder - 02 by David Vinjamuri
Olive of Groves and the Great Slurp of Time by Katrina Nannestad
An Affair Before Christmas by Eloisa James
Fox's Feud by Colin Dann
Our partner