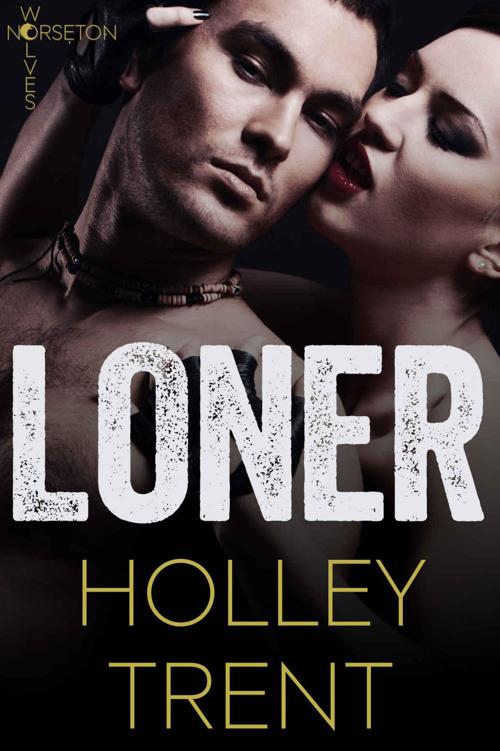 Norseton Wolves is a self-contained miniseries spun off from The Afótama Legacy. You don’t need to read
The Viking Queen’s Men
or
The Chieftain’s Daughter
to understand where the Wolves are or why they’re there, nor do you have to read the four novellas in order. Each Norseton Wolves story is set at approximately the same time. The stories are interwoven and characters may appear throughout the miniseries, but the timelines more or less overlap. The stories may end at different times, depending on how long it takes a couple to find their happily-ever-after, but the ending of one book does not affect another book.

In terms of continuity, Norseton Wolves is set mostly after
The Chieftain’s Daughter
and before
Viking’s Flame
.

I hope you enjoy reading this shapeshifter arc set in the Afótama world as much as I loved writing it.

Half wolf Stephanie Benson has spent much of the last decade enduring criticism from her father’s pack about her deficiencies.

If it weren’t for the fact her inner beast craves a wolf’s sensual attentions, she’d try to settle down with a nice human man. Answering a mate call from an unknown pack is her one chance at fleeing toxic influences, but it’s a gamble. She may end up with a man who finds her softer human physique and progressive opinions just as repulsive as the men back home.

Ousted from his pack as a young boy, Darius Lucas is Norseton’s resident lone wolf. He lacks mastery of the social graces most men over thirty would have, and can barely speak more than a few words at a time. Although Darius is skeptical about saddling a stranger with him for a companion, his alpha insists Stephanie is everything he needs. Darius enthusiastically gives the captivating, bombshell his bite, but not his confidence.

He’s used to being on the fringes, but Stephanie understands how that feels all too well. He may lack polish, but he has the tenderness that was lacking in Stephanie’s previous relationships. They’re both loners in their own ways, but if they can come together to find a common thread, the mates could ignite a romance hot enough to make them both howl.

Stephanie Benson crossed her legs at the knees and folded her arms over her chest.

Pressing her arms over her chest squashed her breasts together and made her already prominent cleavage protrude even more over the front of her V-neck tank. Short of wearing a turtleneck, she knew she’d never meet anyone’s standard for demureness, but she did at least try to keep people’s first impressions of her neutral. When she’d set out on her traveling expedition for the wolf mate call, she’d dressed as she always did for a trip. After turning in the key for her rented painting studio, she’d put on her favorite jeans, sparkly sandals, and a flowing, sage green tank top that brought out the evil in her eyes. At least, that was what her ex had always said. She’d worn it anyway, because it was her favorite. Soft and luxurious, the fabric’s silken caress of her skin made her feel like a goddess whenever she wore it.

Now, she was about to become a goddess with freckled, sunburnt cleavage, and certainly, the only one of her kind.

For fuck’s sake—they’re all waifs.

She looked at the three women sharing the bench with her and barely managed to suppress the hysterical laughter quaking her lungs. Werewolves, in their human forms, tended to be a bit fitter when compared to the human population, due to their faster metabolisms and higher activity levels. Stephanie, though, took after her human mother in the tits and ass department, and nothing in Stephanie’s wolf genetics could offset it.

Up until she’d been given the
or else
ultimatum at age sixteen and pulled into her father’s pack, she’d loved her body. Loved her burgeoning curves and swells, and looked forward to being a jaw-dropping vixen like her mother one day. But during the summer she’d turned sixteen, she presented herself to her father’s pack at his alpha’s order, and the wolves there—well, they were so different. They didn’t look like
real
people. They were comic book characters made of flesh and bone, and she didn’t fit anywhere within the pages of their stories.

The women sharing the bench with her now were typical enough, but Stephanie couldn’t help but to notice whose thighs took up the most real estate. Those women were probably all full wolf. Stephanie’s half-breed status could very well be another strike against her. She already had enough flaws that would turn off a mate.

The alpha, Adam Carbone—now
her
alpha—was coordinating the mate matching. He stood in front of her and made an assessing grunt.

She sighed. “Go ahead and tell me about myself, Alpha.”

“Hey, don’t get your hackles up, red lady. Your energy’s not reading as whole wolf.”

Her hand went reflexively up to tuck back the swatch of ginger hair covering the side of her face, and though her posture was already acceptably upright, she sat up a little straighter. “I didn’t know it was possible to discern that.”

“My alpha never mentioned being able to tell the difference, and he
would
have.” He would have grabbed at any opportunity to tear her down just out of nasty spite. For the life of her, she never could figure out what she’d ever done to deserve it. She didn’t ask to be in the pack. She’d been perfectly content with her very human life in Chicago with her mother.

Alpha worked his jaw from side to side for a few beats before giving her one of those slow, knowing nods that were usually followed by some words that she didn’t want to hear.

“Not everyone who has the job
should
,” he said.

She’d always thought that, but it was better that he said it than her. Coming out of her mouth, the statement might have been considered treasonous. She was no longer a part of her old pack, but until she’d been fully accepted into her new one—paired with a man and received his bite—she needed to tread carefully. If she wanted a wolf for a mate, she couldn’t gain a reputation for being insolent. And in spite of everything, she
did
want a wolf. Only another wolf would understand her basest urges. But at the same time, a full wolf might reject everything about her that was just plain human. She wanted to be hopeful that her mate would accept her, but it was hard. Plus, she had to get past the gatekeeper first—the curious alpha pacing in front of her.

“Your other half isn’t some different kind of shifter, is it?”

“Oh.” He shrugged and moved on down the line, rubbing his chin as he assessed each woman.

Stephanie blew out some of her tension on a long exhalation and folded her fingers atop her lap. Alpha had his back turned, so she turned to the two ladies to her right and mouthed, “Hi.”

They’d barely acknowledged each other during the van ride from Albuquerque’s airport, probably because they’d all been so discombobulated and nervous. Showing up in response to a mate call was a bit like playing craps and putting everything on the line.

One lady winked. The other gave Stephanie a little wave and pulled her earlobe in an obvious signal meaning,
we’ll talk later—people are listening
.

Christina’s nerves ebbed somewhat, knowing that the two women had overheard what she was—
or what she wasn’t
—and would still be pleasant. There was a chance they had their own skeletons to fret about, and hers was tame in comparison. She hoped that was the case, and hated herself a little for it. She’d never been the kind of woman who’d wish ill on anyone, regardless of how much hardship she personally endured. The wolf goddess had always stood for forgiveness and kindness, and Stephanie tried to emulate the mysterious lady as often as she could, even when doing so was a hardship. More often than not, being kind
was
hard, because most wolves weren’t so nice to her.

Adam turned back to them, scanned them all again, made that trademark grunting noise, then looked pointedly over their heads.

Naturally, she turned to see what had caught his gaze.

Three tall men waited in the shadow of one the small adobe homes’ roof overhang, apparently watching the spectacle of the mate match and seeing whom their alpha deemed suitable for each.

She checked the shadows of the other four houses bordering the courtyard as well. No more wolves. The bulletin that Alpha had sent out to all the known packs requested four mates, and seeing as how he had given her the go-ahead to fly down to New Mexico, there had to be one for each of them.

She knew only in vague terms how the mate matching process worked. The vast majority of her friends weren’t wolves, and of the few female wolves in her father’s pack she’d actually associated with, none had ever answered a call. They’d all taken mates within the home pack, for better or for worse.

From what Stephanie understood about the process, when a pack was in need of women, the alpha would put out word through the wolf network, stating how many were needed and where, approximately, the pack was located. Sometimes, a woman could tell which pack was requesting the mates and put out feelers about what the culture and conditions were like. Often, however, there was no information to be found. Every day some new pack would splinter off and relocate, so she’d known nothing about these New Mexican wolves. They weren’t a part of a known pack and had no reputation—at least not a reputation anyone would speak of. She’d taken a chance in showing up, and hoped it would pay off. Wolves wanted a pack to belong to, and that half of her that was wolf overrode her human notions of independence.

Supposedly, what would happen next was that Alpha would tap into his spiritual connection to the goddess and match each volunteering woman to an eligible wolf. If Alpha was any good at translating the goddess’s wishes, he would make good, sound,
lasting
matches. Alphas weren’t always good. Sometimes, women were trapped by their matches, thrust into worse situations than what they’d left at their last pack. It was a risk Stephanie had to take, if only to get the tormenting dreams to stop. They teased of the ideal pack and the perfect mate. She wasn’t prone to fairy tale whims, but she couldn’t help but to obsess about what could be.

Turning back to face her new alpha, she swallowed hard and let out a long, slow breath. She hoped Adam was good, because she was probably only going to have one chance at this. If she refused the pairing, no one else would want her—at least, no one a reasonably sane woman would want. She’d end up having to settle for some weak wolf back in her father’s pack, who would likely punish her for trying to leave in the first place—for wanting more for herself than to be treated like a possession.

She ran her tongue across her lips and set her sights on a large cactus about a dozen yards away. She was used to having her name dragged through mud—used to being insulted and maligned for what she was—and eventually, she would have to put her foot down.

She knew in her heart that she needed a wolf lover. Maybe her own small connection to the goddess had convinced her of that, but the human part of her told her to never settle. She was worthy of love and respect, in spite of what her father had told her. If she couldn’t get that, she’d leave, customs be damned.

Do your thing, Alpha. I’m ready.