Longarm and the Horse Thief's Daughter 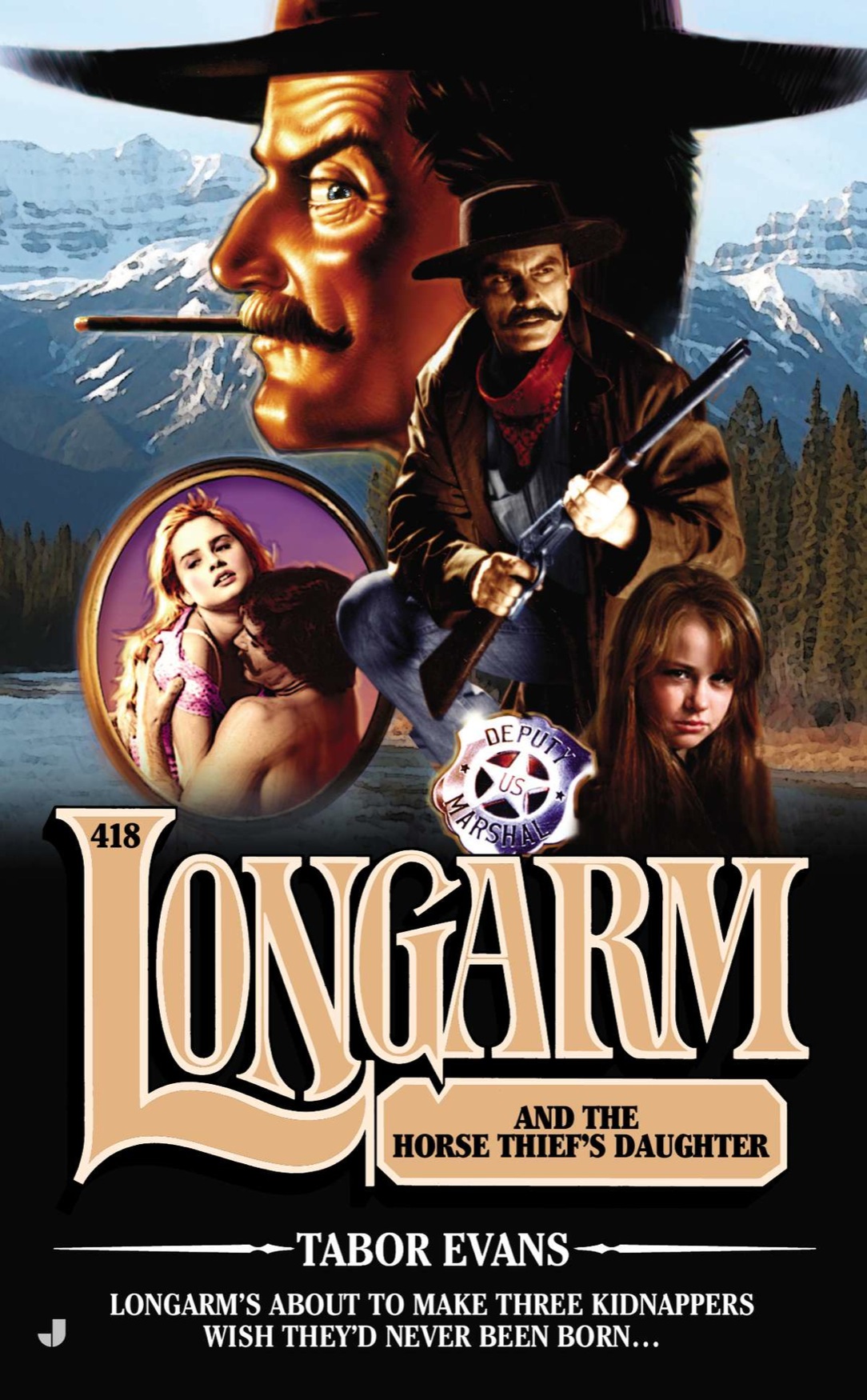 Longarm came upright off his bedroll, on his feet with his .45 in hand before he consciously realized that he was awake.

Someone was trying to steal his horse. The moon was not yet up, so it must have been early in the night, but by the dim light of a crisply cold Milky Way he could see a pale figure trying to get the hobbles off the animal.

Longarm did not hesitate. Horse stealing was still a hanging offense in Colorado, and he had always thought that 255 grains of .45-caliber lead were the equivalent of a hangman's noose.

He took careful aim, so as to avoid hitting his own animal, and triggered off a shot.

The thief crumpled to the rocky ground, hit somewhere in the back.

Longarm rushed forward, ready to fire again if the son of a bitch offered to shoot back. He knelt beside the would-be thief.

The person who was trying to steal his horse was a womanÂ .Â .Â .

THE GUNSMITH by J. R. Roberts

Clint Adams was a legend among lawmen, outlaws, and ladies. They called himÂ .Â .Â . the Gunsmith.

BUSHWHACKERS by B. J. Lanagan

An action-packed series by the creators of Longarm! The rousing adventures of the most brutal gang of cutthroats ever assembledâQuantrill's Raiders.

Dex Yancey is Diamondback, a Southern gentleman turned con man when his brother cheats him out of the family fortune. Ladies love him. Gamblers hate him. But nobody pulls one over on DexÂ .Â .Â .

The blazing adventures of mountain man Will Barlowâfrom the creators of Longarm!

J.T. Law: the most relentlessâand dangerousâmanhunter in all Texas. Where sheriffs and posses fail, he's the best man to bring in the most vicious outlawsâfor a price. 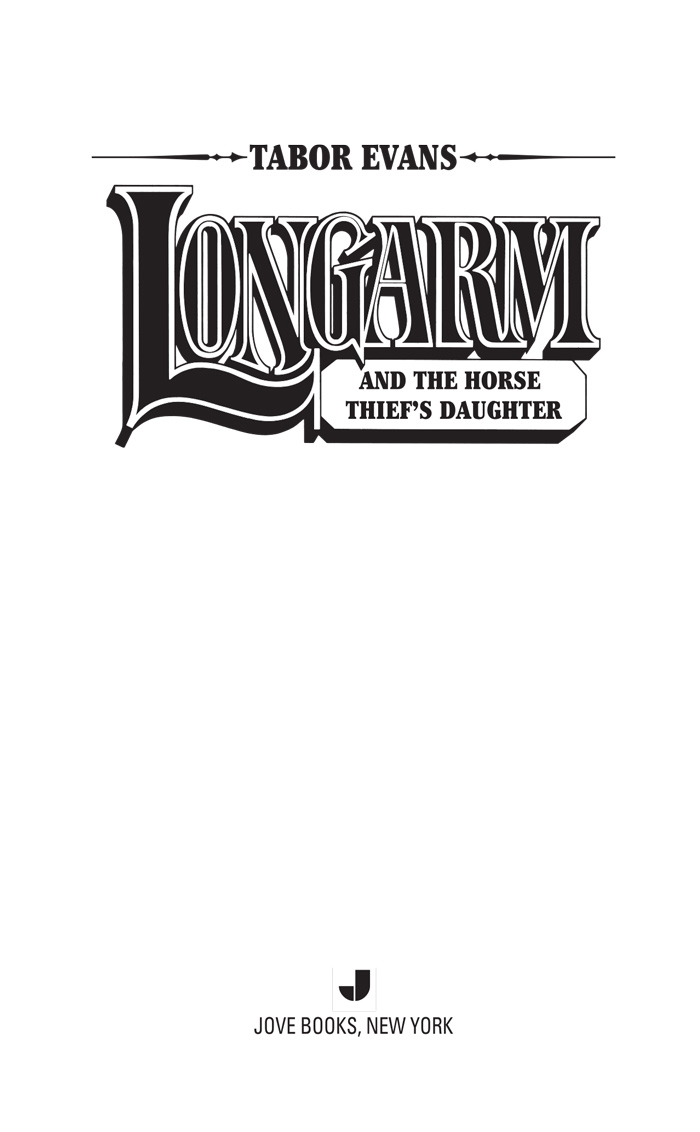 LONGARM AND THE HORSE THIEF'S DAUGHTER

All rights reserved. No part of this book may be reproduced, scanned, or distributed in any printed or electronic form without permission. Please do not participate in or encourage piracy of copyrighted materials in violation of the author's rights. Purchase only authorized editions.

Jove Books are published by The Berkley Publishing Group.

JOVE
Â®
is a registered trademark of Penguin Group (USA).

The “J” design is a trademark of Penguin Group (USA).

a division of Penguin Group (USA),

Deputy United States Marshal Custis Long leaned back, crossed his legs, and lighted a cheroot. “Just think, Boss. This time next week I'll be somewhere up in them mountains with my gear laid out beside one o' them little lakes, a fresh-caught trout sizzlin' in the pan, and a pot o' coffee on the coals. I'm telling you, Billy, that's the life. I'm looking forward to it. First real vacation I'll've had inÂ .Â .Â . I don't even know how long.”

Chief Marshal William Vail smiled. “Do you want me to look it up and find out how long it has been?”

“Uh, thanks for the offer, but I reckon I don't really need to know.” Longarm puffed on his cheroot and blew a series of smoke rings into the air between him and Billy.

“Is there anything you want me to do before I head out?” he asked.

“Thanks for asking, but no. You are free to go.”

Longarm grinned and stood, rising to his full height of more than six feet. He was an impressive figure of a man, with broad shoulders, a narrow waist, and long legs. He had brown hair and a sweeping, brown handlebar mustache. His face was leathery, deeply tanned by years on horseback. He considered himself ordinary, perhaps even homely, but women seemed to find him more than passingly handsome.

He wore a brown checked tweed coat, brown corduroy trousers, and black stovepipe boots. A black leather gunbelt cinched his middle with a double-action .45 Colt carried in a cross-draw holster. A watch chain stretched across his belly from one vest pocket to the other. One end of the chain was attached to an Ingersoll railroad grade watch, but the other held a .41-caliber derringer, useful in some situations.

In his inside coat pocket was a folded leather wallet, inside of which was his badge. That too was useful in certain circumstances.

At the moment Longarm's thoughts were not on the dangers of his job but on the pleasures of getting away from it.

“You're sure you don't need nothing, Boss?” he asked.

“Dammit, Long, I know what I need, and right now what I require is that you go on about your vacation. I have work to do right here.” Billy shook his head, his bald dome catching the light spilling through the window at his back. “I'll be lucky to get out of the office before midnight tonight, so go on and let me get to it.

The chief marshal sighed. “If I had known how much pencil pushing and paper shuffling was involved with this job, I think I would have turned it down. So please. Leave. Go catch a fish orÂ .Â .Â . something.” Billy waved a hand as if shooing an annoying housefly.

Vail made the shooing motion again and bent to the papers laid out on his desk.

Longarm stood and silently slipped out of the marshal's office.

He crossed Cherry Creek to his boardinghouse to finish packing. When he was done with that, he removed his city clothes, keeping only his duds from the waist down but leaving the tweed coat, the vest with its watch chain, and the derringerâafter all, a man on vacation does not need a watchâand substituting a much worn and battered version of his brand-new snuff-brown Stetson hat.

He collected a blanket-lined canvas coat from his wardrobeâit could be cold in the mountains at any time of yearâand added a sheepskin vest. The vest he pulled on immediately; the coat he bundled together and strapped to the outside of his travel-worn carpetbag.

He removed his bedroll from the cantle of his ball-busting McClellan saddle, figuring that while on vacation he would value comfort for himself more than for any rented horse he might find himself using. Beside, he would not be pushing an animal up there in the mountains. There would be no need for the saddle. This would be a quiet, leisurely sort of vacation. Nothing exciting at all.

Longarm started yawning and relaxing even before he left the boardinghouse and stepped down into the street in search of a hansom to carry him and his gear to the railroad depot.

Peace and quiet were just exactly what he needed, he thought. And what he intended to have.

But then the best laid plans can come apart.

Longarm had to actually pay for a train ticket this trip. It felt odd to break out his wallet for a change. When he did, the ticket agent saw his badge and asked, “Are you a marshal, mister?”

“A deputy, yes,” Longarm told him.

“You know that U.S. marshals ride free, don't you? It's part of the agreement because we carry the mail. We have to provide certain services to you government boys.”

Longarm smiled at the young man. “Oh, I know that all right, an' I'd ride on the badge if I was on official business. This time, though, I'm on my own.” His smile widened into a grin. “Vacation, don't you see. First one in quite a while.”

“Silver Plume seems a strange place to go for a vacation,” the clerk said. “It's kind of smoky and it smells of chemicals, and of course there is all the noise from those stamp mills pounding rock into dust. No, sir, it just seems strange that a man would go there for vacation.”

“It is all of that,” Longarm agreed, “but it's a good jumping-off place if you want t' get up into the mountains. Which I do. Got me a brand-new fly rod. Split bamboo all the way from God-knows-where. And I've been tying flies in my spare time for the past month.” He laughed. “Such spare time as I have, which ain't much, but I got me a mess o' flies that I figure to exchange for a mess o' fish once I get up there. I'm really lookin' forward to this here trip.”

“I don't blame you at all, Marshal. Let's see. Denver to Silver PlumeÂ .Â .Â . that will be seven dollars and sixty-five cents.”

Longarm whistled. “Lordy. So much?”

“If you want to show me that badge again, you can ride for free,” the clerk offered.

Longarm shook his head. “No, sir, I'm not gonna take advantage like that. Wouldn't be right.”

“I know. I heard you the first time. I just didn't realize that you railroad folks are such robbers. Seems like I oughta be arrestin' you for highway robbery.”

But he dug out his pocket purse and handed the man a ten-dollar gold eagle fresh from the mint across the street from the Federal Building, where Billy Vail had his offices. The clerk made the appropriate change and handed it to him along with the ticket to Silver Plume.

Longarm lugged his own gear to the baggage car rather than pay a porter to do that job for him; then he walked forward to the second of the two passenger coaches.

There were only a handful of passengers going up into the mining district; consequently there was no lounge car attached to this train and no opportunity for a card game to pass the time en route. Longarm selected a seat by a window. He shoved the window up and hoped there would be no cinders blowing in through it. Not that his camping clothes were so precious that a cinder burn would do any harm. Or even be noticed.

With time to kill and no plan in mind, Longarm smoked a cheroot while he waited for the train to pull out of the station. When he was done with his smoke, he flicked the butt out of the open window, slumped down low in his seat, and tugged his hat brim low over his eyes. He might just as well start relaxing right here and now, he decided, and he closed his eyes to take a nap, visions of huge trout in his thoughts.