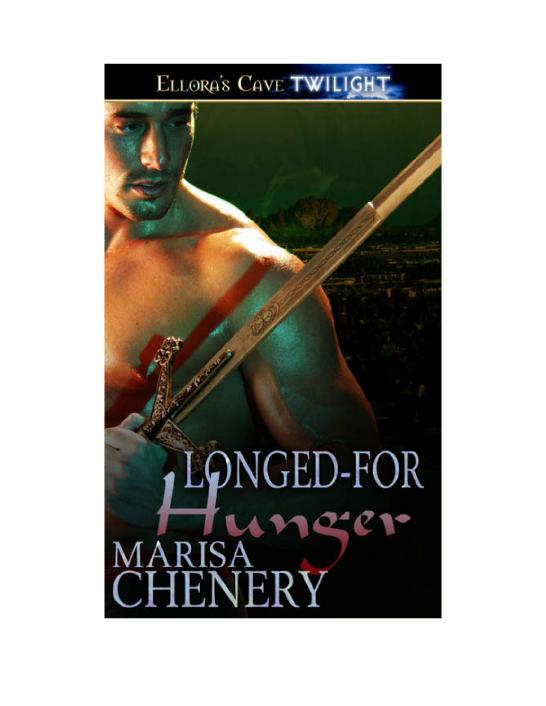 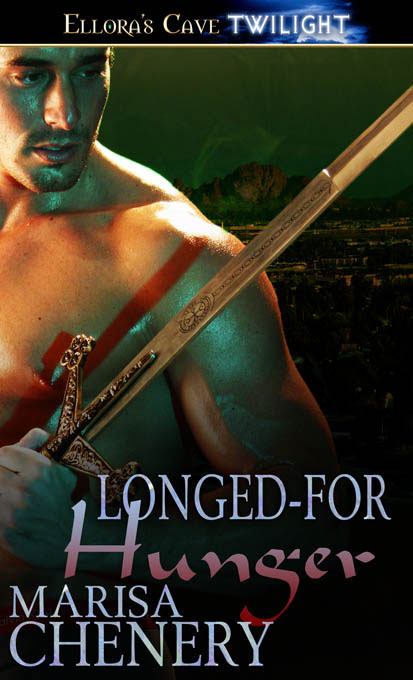 Denger is a hunter, spending his nights on the streets of Phoenix fighting the undead who threaten unknowing humans. It’s in his blood. It’s what he knows. But a new knowledge has taken hold. Like other warriors before him, he must hunt for a different kind of prey altogether. His mate. Once he finds her, nothing will keep him from claiming what is his. Nothing but her, that is.

After the death of her husband three years ago, Nyx is content to spend her evenings at home, wrapped up in the vampire romance novels she loves. But when she collides, literally, with a man who could have stepped out of the pages of one of her books, she begins to think living her love life through romantic tales may not be the way to go. But as with any good story, there’s a plot twist. Once she discovers Denger’s true nature, she must decide if she can risk her heart and live a life where truth is stranger than fiction.

In Egypt of old the sun god Ra held sway, worshiped as the father creator. Each day he rode the skies in his solar barque bringing light to the land. And every night he traveled through the dark underworld until the dawning of a new day. During his nightly voyage, Ra faced his greatest adversary, a being of such evil and darkness, people shuddered—the demon god Apep, the eater of souls. Ra and his companions battled the demon, defeating him each night only to face him again when darkness fell once more.

It is said that one night Apep gained the upper hand, which caused thunderstorms to rage and the earth to shake. Using the chaos he had created, Apep unleashed two evils into the world. Two demons called Sek and Mot were set loose to bring down mankind by collecting souls for their dark master, turning mortals into soulless shells commanded by Apep.

To counteract Apep’s evil minions, the sun god chose six warriors. He gifted them each with immortality and the powers needed to defeat their enemies. As Ra’s Chosen, the warriors fought the evil that threatened to take over, pushing it back, to stand between man and demons.

Some say to this day Ra’s Chosen still fight to protect the unsuspecting mortals around them. In the shadows they stalk their prey each night, ever on guard, forgotten by those who they had been charged to watch over.

Denger pulled his souped-up Mustang over to the curb and parked. As he emerged, a blast of mid-morning Phoenix heat assaulted him. It was time to hunt. But unlike the undead he and his fellow warriors sought at night, he was after a different kind of prey. A woman. And not just any woman—his mate.

With no real destination in mind, he walked down the sidewalk at a casual pace. His eyes lingered on each woman he passed, hoping they would stir his blood hunger. Two of his fellow warriors, Mehen and Set, had already found their mates. Ra, the sun god, had said each of them would find the one woman meant for them. Out of the remaining four warriors of Ra’s Chosen, Denger knew he was next in line to find his mate. His blood hunger had increased. Previously, a once-a-week feeding from a donor would be all he needed. It no longer was. The increase in blood hunger was the first sign that he would find her soon.

Unlike Mehen and Set who had just waited to stumble across their mates, Denger had decided to take the bull by the horns and see if he could find
his
woman. He wasn’t one to patiently sit by, waiting for what was to be his to fall into his lap. So when his need to feed increased to more than once a week, he’d started to roam Phoenix’s streets during the day, ever on the lookout for the one woman who would be his. So far none of the women he encountered set off his blood hunger or stirred his body, something only his mate would do.

The chances of him finding her this way had to be pretty slim, there was only so much of the city he could cover in a single day but it didn’t stop him from trying. It had only been a week, but Denger didn’t plan on giving up his search any time soon. He could be as stubborn as the next person when he wanted something, and he wanted to find his mate. He’d been alone for centuries. He wanted what Mehen and Set had. 7

Denger had been walking for what seemed like hours when he lifted his face to the sun, drawing strength from its heat, and took a deep breath.
Ra, a little help would go a
long way you know
, he said inside his head.
Can’t you at least give me a little sign as to who
she is?

As expected, Ra didn’t reply. The sun god was like that. He liked to make his warriors work for the answers they sought. Denger closed his eyes for a second and blew out a breath while he continued his aimless walk.

The feel of a soft, feminine body slamming into the front of him drew Denger up short. He quickly grabbed the woman by the upper arms to steady her and looked down. When the woman lifted her hazel gaze at the same time, his cock went instantly rock hard and his blood hunger start to ride him.

“I’m so sorry,” she said. “I should have been paying more attention to where I was going.”

Denger let his gaze run over her chin-length red hair, pert nose and full, kissable lips. The longer he stared, the harder his cock became. He dropped his gaze to her body, which was slim. She barely reached the middle of his chest. He guessed her to be around five-foot-four. Compared to his over six and a half feet, he dwarfed her. Then her scent filled his nose. Denger fought the urge to roughly pull her against him. He drew in a deeper breath, pulling more of her intoxicating scent into his lungs. His blood hunger rode him harder and his fangs dropped before he could get himself back under control.

Ducking his head to hide his fangs, that now grazed his bottom lip, from her view, he muttered, “No need to apologize. It was partially my fault.”

“It’s what I get for hurrying,” she said. “I’m late for work and all I could think about was getting inside before my boss got pissed at me.” She motioned toward the entrance of the bookstore they stood in front of.

Before she could say anything more, Denger stepped around her and continued on his way. It took everything in him not to return to her. But he didn’t think flashing a fang at their first meeting would put him in good stead. He would walk away for now, but that didn’t mean he was going to stay away.

Even though she was late to start her shift, Nyx watched the man who she had bumped into hurry away. Her gaze landed on his tight backside and she sighed. He had one of the best asses she’d ever seen and his jeans were just tight enough to give her a good view of it. She lifted her gaze higher and latched onto his waist-length black hair he wore pulled back in a ponytail at his nape. Nyx bit back a groan. She liked men with long hair. Add in an extremely muscular build and a face so attractive he could make a woman’s pussy wet just by looking at her, Nyx couldn’t help but appreciate the scenery.

Turning away, she headed into the bookstore. Attractive the man was, but there was something about him that made her feel a bit uneasy when he stood towering over her. It wasn’t so much that she was afraid of him. It was the lethal air that seemed to surround him. That and the fact that just before he’d walked away she could have sworn she’d caught a glimpse of what appeared to be the tips of a pair of fangs protruding past his upper lip.

Nyx gave herself a mental shake and made her way to the back of the store. Yeah, right. The guy had fangs. It had to be her overactive imagination, or the one too many vampire romance novels she’d recently become addicted to. There was no such thing as vampires. And even if there were, they sure as hell wouldn’t be walking around outside in the sun.

Her boss, Janet, came out from the back room just as Nyx reached the counter. Nyx quickly said, “I know. I’m late.”

Janet waved her statement away. “Only by five minutes. That’s nothing. And it’s not as if there is a mad rush of customers.”

On her way in, Nyx had counted four customers in the store. “You know me. I hate to be late for anything.” She walked around the counter and put her purse on a shelf under it. “I promise I’ll be on time tomorrow.”

“Relax, Nyx,” Janet said with a chuckle. “It’s no biggie. You’ve worked here for four years and this is the first time you’ve been late. I don’t think that’s grounds for me to fire you.”

“That’s nice to know. So what would you like me to do first?”

Janet motioned to two stacks of books that sat on the end of the counter. “It’s time to change the display in the front windows. Interested?”

Nyx nodded and glanced at the titles of the books, which were a mix of hardcover and mass-market paranormal romances. She smiled. “Most definitely. And you do realize I’ll be book shopping at the same time.”

“I figured you would,” Janet said with humor in her voice. “I think you’re one of our best customers. I don’t know how you find time to read so much.”

“Give me a good book over TV any day. It’s better than sitting at home every night staring at the walls.”

Janet shook her head. “It’s been three years, Nyx. It’s time for you to stop spending your nights alone.”

Afterlife by Isabella Kruger
A Betting Man / a Marrying Man by Sandrine Gasq-Dion
All That I See - 02 by Shane Gregory
A Gathering of Memories by Wick, Lori
The Feel of Steel by Helen Garner
Rex Stout - Nero Wolfe 31 by Champagne for One
The Heir & I: Taming The Billionaire by Lara Hunter
Manic in Christmas River: A Christmas Cozy Mystery (Christmas River Cozy Book 6) by Meg Muldoon
The Magickers by Emily Drake
The Dread Hammer by Linda Nagata
Our partner