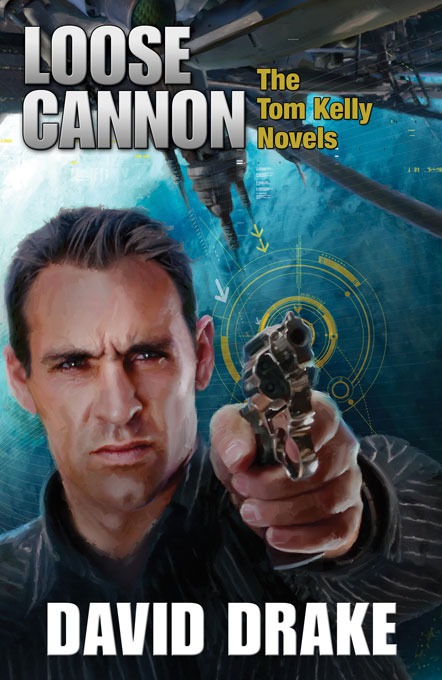 The Far Side of the Stars

The Way to Glory

When the Tide Rises

In the Stormy Red Sky

Caught in the Crossfire

All the Way to the Gallows

The Chosen with S.M. Stirling

The Reformer with S.M. Stirling

The Tyrant with Eric Flint

The Belisarius Series with Eric Flint

Belisarius I: Thunder Before Dawn
(omnibus)

The Tide of Victory

The World Turned Upside Down

Tom Kelly and Me

In the Spring of 1981 I was in my first year as a part-time bus driver for the Town of Chapel Hill, after having spent the eight previous years as Assistant Town Attorney for the Town of Chapel Hill. I wasn’t an especially good bus driver, but I was an excellent employee: I showed up for work on time, I was courteous, and I came in on my off-days when the dispatchers needed somebody to cover a run.

I got a call at the bus garage—this was before cell phones—from Jim Baen. Jim had bought the first stories in the Hammer’s Slammers series when he was editor of
Galaxy
magazine.

When Tom Doherty became Publisher of Ace Books, he had hired Jim to run the SF line; there they published my first book,
Hammer’s Slammers.
Tom had left Ace to found Tor Books; Jim had joined him shortly thereafter. I had sold a linked series of stories to Tor, turning the material in on time and in accordance with specifications. Though that book (
Time Safari
) hadn’t come out yet, I’d convinced Tom and Jim that I could be trusted to behave in a professional fashion on a larger project.

Which is what Jim’s phone call was about. Tom Clancy had begun to blow the socks off the marketplace with what came to be called techno thrillers. Tom and Jim wanted me to write a techno thriller for Tor and were offering me $8,000 to do so. (Parenthetically, I was earning about $4.25 cents an hour as a bus driver, up from a starting pay of $4.05; it was still better than being a lawyer.)

The offer should have been a no-brainer, but not for the last time I demonstrated a level of boneheaded stubbornness. I wasn’t sure I could write the sort of book Jim was talking about, a reasonable concern. But also I wasn’t sure I wanted to, because I was armpit deep in writing on spec a huge, plotless historical novel involving 17th century inheritance law, pirates, and the court of Aurangzeb (in the first hundred and some thousand words, that is). Looking back on it, worrying about the historical appears perverse to the verge of insanity, but I did.

Editors and publishers as experienced as Jim and Tom were used to dealing with screwy writers, though. They created a contract which promised heavy promotion for my unfinished historical but required that I write the thriller first. The only thing that has happened to the historical after that was that the stack of yellow pads on which I wrote with soft pencils moved with me to our new house.

I started plotting a thriller. I had read a fair number of spy novels and intelligence memoirs over the years, but I got into the subject more deeply. I also got into the hardware side, the how-to of bugs, communications intercepts, and so on.
Skyripper
—which became the title of the novel—is one of the few books for which I did a great deal of book-specific research; usually I write about things that I already know in detail.

This led to one amusing story. I continued to drive a bus; when there was a layover of a few minutes, I read a book.

Or at any rate, I read books when the customers would permit me. Passengers don’t see many bus drivers during a day, so we were new and interesting to them. Bus drivers see a
lot
of passengers, and they’re not a bit interesting unless something goes wrong.

One early morning, before the start of my run, a middle-aged woman boarded my bus in an upscale neighborhood. I was reading, but she wanted to chat. I wasn’t impolite, but I deeply didn’t want to chat with her (or anybody).

She then asked what I was reading. I told her she didn’t want to know. She insisted that she did, so I handed her the book:
How to Kill
, Volume III, by John Minnery. I don’t know precisely how she felt about that, but it did shut her up.

I had spent a couple weeks in Algeria the year before, visiting a friend in the Foreign Service. That gave me a setting which would be unfamiliar to most readers, and it also gave me some insight into the parts of embassy life which don’t ordinarily get into published accounts. (Laumer’s Retief and Durrell’s Antrobus stories, written by former low-ranking diplomats, are better guides to those realities than are any number of ambassadors’ memoirs.)

Then I needed a viewpoint character. I did something unusual there. I was in the field in 1970 as an interrogator with the 11
th
ACR. Our tent was generally pitched adjacent to that of the Radio Research section: that is, the National Security Agency field unit. Their job was to intercept and record enemy communications and to transmit the data back to Fort Meade.

The Radio Research people were warrant officers and senior enlisted men, professional soldiers in all senses. They spoke multiple languages and demonstrated remarkable skills, but the job didn’t require Ivy League degrees or Savile Row suits. (One had an ear collection.)

And they had stories. Some of them had been places most Americans had never heard of, doing things that Americans weren’t supposed to be doing. They worked for what is reputedly the most secretive spy agency in the world, but they talked to other enlisted men who sat with them in the Cambodian night and waited for something to happen—knowing that anything which happened would be bad.

They talked to me.

I gave Kelly the skills and ruthlessness of the men I’d known. He drank, because men who do those things always drink.

And I gave Kelly the anger which also comes with certain lines of work. I didn’t have to look far for that. I hadn’t been all the places the RR people had been, but I’d been to enough of them to be furiously angry—at the world, at life, and at myself.

Writing
Skyripper
showed me that I was a lot angrier—still—than I had realized until then. That was useful to know, but that mindset wasn’t one I wanted to revisit in this lifetime.
Skyripper
sold well, but I refused to do another Tom Kelly book when Tom Doherty asked me to.

Then Jim Baen left Tor to found Baen Books. Tom and Jim stayed reasonably friendly, but they were competing for very similar portions of the market. I remained close to both men, and I didn’t want it to appear that I had chosen one of them over the other. I therefore told both immediately after the split that I wanted to write a new contract with each of them.

Jim wanted a Hammer novel for Baen Books. Fair enough, though I’d refused to write more in the series for him at Tor.

Tom wanted a sequel to
Skyripper
. Furthermore, he wanted me to show the (proposed) Strategic Defense Initiative (the Star Wars Defense) driving off an alien invasion. I argued against this for a number of reasons, but I’d given Tom my word that I would do what he asked—so I did it under the title
Fortress
.

Or at least I did as much of it as I could. I flat didn’t believe in most of the proposed technology of SDI and just couldn’t describe it working to spec. Further, even the optimists envisaged a twenty-year lead time, so rather than doing a true sequel to
Skyripper
, I started in 1963 in an alternate universe. (Despite my scruples, an article in the
SF Encyclopedia
claims that
Fortress
gives “quasi-fetishistic status” to the Star Wars program. Worse things happen in wartime, as we used to say.)

I set most of
Fortress
in Eastern Turkey, as the result of another visit to my friend in the Foreign Service. Part of the business involves the workings of a US Congressman’s office, however. I owe that to time spent as rewrite man on Newt Gingrich’s first book. Like Vietnam, editing
Window of Opportunity
taught me things which I could not have learned in any other way.

Skyripper
and
Fortress
were written and are set in the ‘80s. The world has changed a great deal since then. Men like Tom Kelly still exist, though, as they have always existed. (Take a look at Homer.) Returning to these books reminds me more strongly than ever that I don’t want to be one of them myself.

But it also reminds me that I could have been. There, but for the grace of God, went I.

writers than we were objectively worth at the time.

Friends are people who come through when you need them.

Many of my friends came through for me while

I was writing this novel. I regret that I cannot for their

own sakes acknowledge them by name; but that does not mean

that I have forgotten or will ever forget their help.

The sound of the weapon firing was as brief and vicious as the first crack of nearby lightning. There was nothing more, no thunder rolling, deafening. Banks of fluorescent lights staggered on all over the laboratory compound as the TVA grid took over again from the emergency generator. The yellow glow-lamps that had remained on during testing tripped out when the generator driving them did.

The Secretary of State frowned in a combination of surprise and mild irritation. He had seen laser weapons tested in the past. A pale beam would lick out of the ungainly apparatus. Relays might hammer, pulsing the available power into microsecond bullets of energy that were hot enough to do realistic damage down-range. The target was ordinarily a thin sheet of titanium whose thermal conductivity was so low that it concentrated every erg it received on the point of impact. Vaporized metal would curl away like smoke from a cigarette—incidentally and inevitably scattering the beam which still attacked the target surface. At last a hole would open in the sheet, expanding as the operator shifted the beam to nibble away at the edges.

Along Wooded Paths by Tricia Goyer
Lord of Temptation by Lorraine Heath
Plata by Ivy Mason
A Place Called Freedom by Ken Follett
Trying Not to Love You by Megan Smith
The Crowned (The Blood and Brotherhood Saga, Book 6) by Laszlo, Jeremy
Cutting Edge by Carolyn Keene
Sons of Destiny Prequel Series 003 - The Shifter by Jean Johnson
Maybe This Time by Chantal Fernando
Deadly Deception by Kris Norris
Our partner