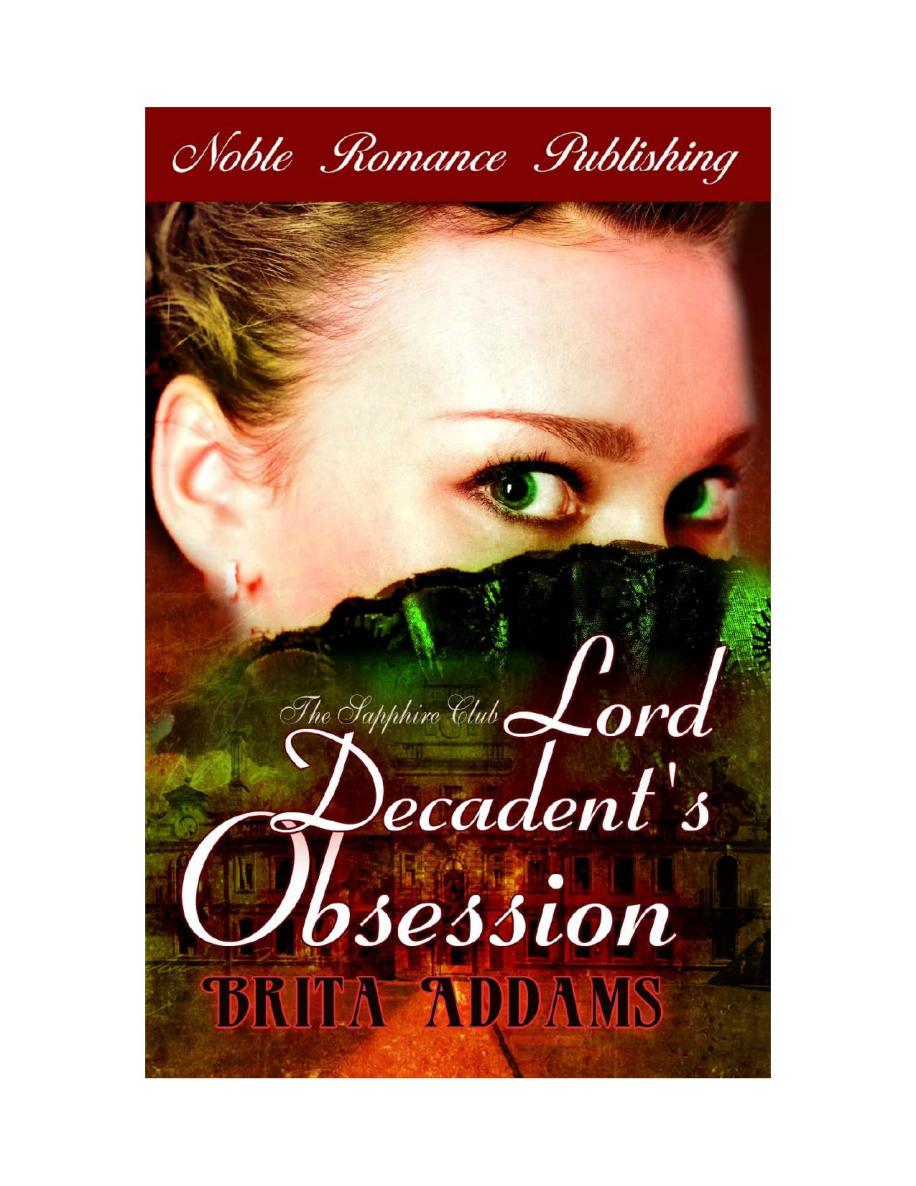 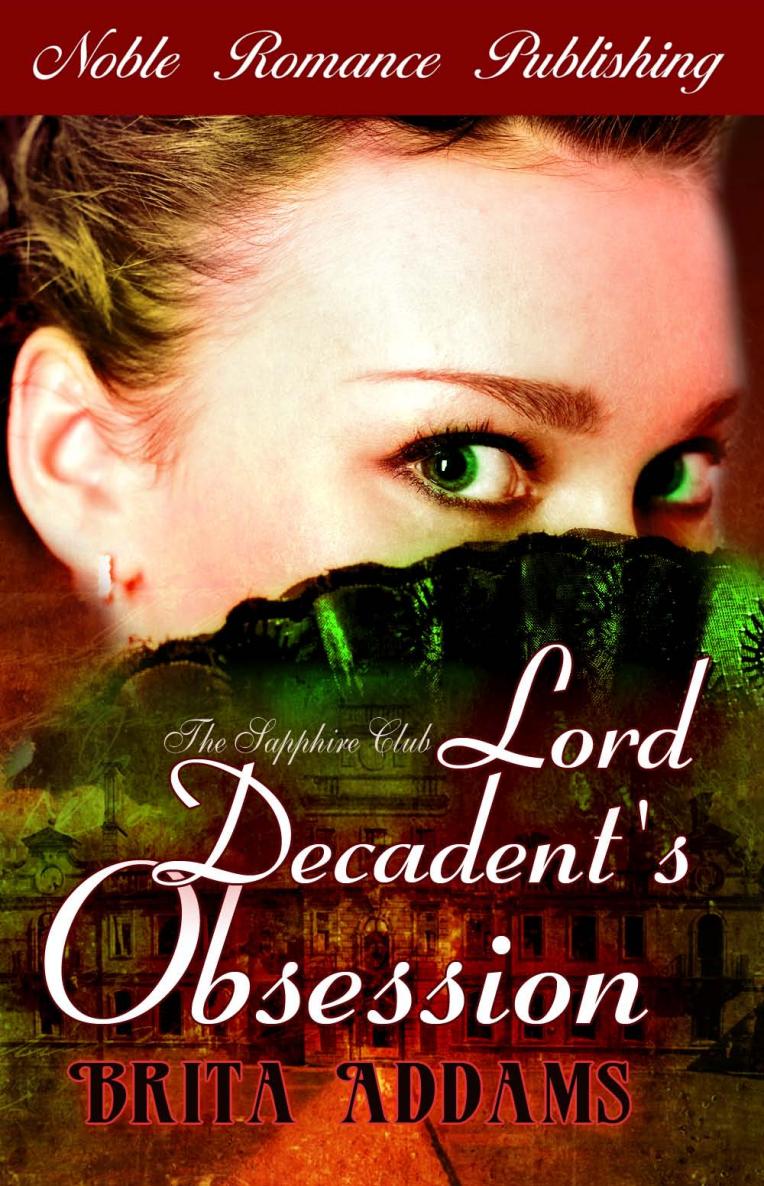 without written permission from the publisher. Contact Noble Romance Publishing,

This book is a work of fiction and any resemblance to persons, living or dead, or actual

events is purely coincidental. The characters are products of the author's imagination

Since losing his wife, a woman who shared his sexual proclivities, Prentice Hyde has

wandered lost, until Desiree Huntington appears at The Sapphire Club, wishing to

engage his services in just the activities he most enjoys. At her seductive request, he

paddles her lovely derriere, then takes her to his bed, showing her passion that she has

However, Desiree has a secret. Ten years before, the wicked Prentice Hyde took her

virginity, her being one in a long line of faceless young women who were charmed by

the handsome and persuasive Marquis of Wycroft. That single act destroyed her life,

forcing her into a marriage with a man three times her age. Now, Desiree is bent on

her own heart? Can she forfeit the sexual awakening he has aroused in her? Will he be

support means everything to me. Love you all. To Keta Diablo, my mentor and friend.

Thank you from the bottom of my heart. Your books inspire me and your

encouragement can only make me a better author.

Prentice Hyde glared moodily at the flames. If a stranger were to see him

standing there, one would never imagine he was the Marquess of Wycroft. His tawny

hair was mussed, a casualty of too many lonely, desolate hours. His cravat was

unbound, and falling freely down his chest; the billowy sleeves of his ivory lawn shirt

were rolled up to his elbows. He was brooding as he took another sip of his smoky

scotch. Brooding, and waiting . . . and he
hated
waiting. His impatience would not bode

well for his guest, he feared. Just thinking about what he was there to do made his cock

"Finally," he shouted toward the door. "Get your ass in here, now."

The door creaked open, and a woman walked in, her beige cashmere cloak

covering her from head to toe. She stepped over the threshold and shut the door. "I'm

sorry for my tardiness, my lord."

Prentice made a slow turn toward the woman, taking in her appearance for the

first time. She was rather short, but then most everyone was when compared to his six

foot three inches. Her hair, almost as blonde as his, was unbound, wavy, and thick. The

candlelight showed it to be golden, but she could have been bald for all he cared. It

"Remove your clothes," he repeated, his tone stern.

She struggled to remove her dress, a silly pink confection that floated to the floor

with a silky swish. She hadn't worn stays, which left her standing before him in a

dampened the chemise, for it clung to her every curve. Prentice's mouth watered, and

he wondered if she'd done it for his benefit.

"Show me your breasts."

He was reaching beyond his purpose in meeting this young woman, but she

deserved to be uncomfortable. She'd kept him waiting.

her breasts, revealing puckered nipples. Prentice took a step toward her, slow and easy.

He stopped six feet from her, and sat in the middle of the large, blue and gold-striped

As she did, his cock begged for surcease.

"Yes, squeeze them until they hurt."

She released a little squeak, but her head lolled back, showing him she enjoyed

what she was doing.

"What is your name?"

"Why have you come here, Susan?"

"To have my bottom spanked, sir. My betrothed insisted I know what a real

spanking feels like before we are married. He says I will have many. It wouldn't be

proper for him to do this before we are married, so he brought me here."

"So you wish to be spanked, dear Susan."

"Yes, my lord. I wish to please my betrothed when he is my husband."

She blushed. Prentice did so love the color pink or crimson on a woman's cheeks.

He raised his arm and beckoned her with his fingers. "Drop your chemise, and

Susan did as he bid.

"I'm going to spank you with my hand, Susan."

"Lie across my lap. Now are you comfortable?"

cock. "Your husband will want your bottom to be reddened all the time, I suspect. Your

cheeks are much too pale, my dear." He smacked her right cheek, eliciting a surprised,

"Did you feel that?"

force. She sniffled but made no other sound. "Were you ever spanked as a child, Susan?"

"Well, let's see if we can't show you how enjoyable a spanking can be."

He gave her several more quick smacks, followed by a harsh hand rub, and then

a few more swats for good measure. She "Eeked" and "Ouched," but held fast, gripping

his pant leg with both hands. Prentice used his hand to open her thighs, exposing her

private parts. He dipped into her folds, and she rewarded him with a wiggle.

"Has any other man ever touched you thusly?"

Prentice chuckled. "Not even that fiancé of yours?"

"With your permission, Susan, I am going to show you something. When you are

married you must show this to your husband, and never let him take his pleasure

without giving you yours. Do you understand?"

"You see, dear, if sex is done properly, it is with an equal measure of pain and

pleasure. Your ass will tingle and burn, making it impossible to forget that you are a

sexual being. Now, let me show you the pleasure. His deft hand found her clitoris, and

he began to circle the already erect nubbin. "You little minx, you are enjoying this

He'd already worked her into a state of ecstasy. She rubbed her soaking wet folds

against his hand, and moaned as only a woman on the verge of reaching her pleasure

She did just that, making it difficult for him to continue. She writhed and

squirmed, shouting unintelligibly. His cock throbbed; no doubt he could fuck a Seven

Dials whore and be satisfied.

Little Susan seemed to have become a woman right before his eyes. "Are you a

She hesitated, making him wary.

"Are you?" His patience grew thin.

"Twenty. I just had my birthday at Christmas."

your father. I wish you happy in your marriage." He smacked her hard on both cheeks,

and she yelped. "Get up now, and get dressed. We are finished here."

He helped her to her feet, walked to the mantel, and took up his glass of scotch.

She dressed, eliciting his help with the buttons.

"I suggest you be on your way. I'll have Hampton get you a hackney."

She picked up her cloak and raced from the room.

Prentice sipped his scotch as he paced the room. His cock was raging. He'd

fucked his way through the
ton
without any special regard to marital or virginal status.

No apologies whatsoever, he'd broken in many young women when they'd become a

bit too blatant in their flirting. Always with their consent, of course; they were amply

rewarded with pleasure beyond anything they would get when they married their old,

wealthy nobles. He'd even instructed them on how to feign losing their virginity on

their wedding nights. He was nothing if not obliging, a true servant to womankind.

Alone, now, and unsatisfied, he needed relief. Though he could have found

someone with whom he could enjoy a quick fuck, he wasn't so inclined. Being alone

suited his mood. He resumed his seat on the sofa, opened the fall of his breeches, and

released his cock. "No
willing quim for us tonight, old boy
." Prentice took himself in hand,

his head back against the sofa, a handkerchief in his free hand. This was about relief,

After cleaning himself up, he went in search of his friend, Lucien Damrill, owner

of the Sapphire Club. He preferred getting foxed to wallowing in the loneliness that had

infiltrated his life of late.

young woman's arse. Her body was still weak with envy as she thought of how he'd

applied his hand to young Susan's ever reddening cheeks.

"My God, I have never seen anything so exquisite in all my life," she'd whispered

to Serenity Damrill, wife of the owner of the Sapphire Club. She heard the door to room

close. She looked into the room once again, and noted the absence of the gentleman

who had left her in her current state.

She was still riveted to her chair, awestruck at the sights she had witnessed.

"Yes, he is quite skilled, though I can't speak from personal experience."

"Mrs. Damrill, what must I do to engage the marquess in such activity?"

"I believe you simply must ask, Mrs. Huntington. The marquess is a particular

friend of mine, and I will be happy to make the introduction, if you'd like."

"I would very much like the introduction; now, if you don't mind."

Serenity Damrill chuckled. "I understand your haste. Come, I will make the

introduction, then you may settle the details with Lord Wycroft."

"I understand, Mrs. Damrill. Might I have a few moments to compose myself?"

"Please, call me Serenity. Everyone else does, and of course you may."

The ladies chatted innocuously for several minutes. When Desiree felt more sure

of herself, she nodded as Serenity led her from the small viewing closet that had

afforded her such a delicious view of the equally delicious marquess.

Serenity knocked on the double doors of the library and opened them.

Her husband rose from his chair, smiling as his wife entered. "Dear, it is nice to