Read Lord of the Vampires Online

Lord of the Vampires 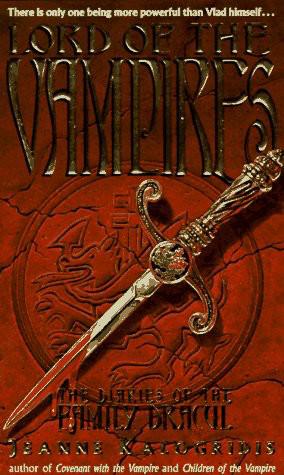 LORD OF THE VAMPIRES

DIARIES OF THE FAMILY DRACUL

Published by Dell Publishing a division of Random House, Inc.

If you purchased this book without a cover you should be aware that this book is stolen property. It was reported as unsold and destroyed to the publisher and neither the author nor the publisher has received any payment for this stripped book.

All rights reserved. No part of this book may be reproduced or transmitted in any form or by any means, electronic or mechanical, including photocopying, recording, or by any information storage and retrieval system, without the written permission of the Publisher, except where permitted by law. For information address: Delacorte Press, New York, New York.

The trademark Dell(r) is registered in the U.S. Patent and Trademark Office.

Reprinted by arrangement with Delacorte Press

Heartfelt thanks are due the following august personages:

First and foremost, to Dell editor Jacob Hoye for his exceptional patience and kindness. The book you now hold in your hands arrived on his desk terribly late, and he, as well as copy editors and publicists, worked at an insane pace to get it onto the shelves. On behalf of him and all the other brave souls at Dell, I offer up humblest apologies, plus the offer to inflict upon myself thirty lashes with a cat-o-nine-tails at the time and place of their choosing.

To Elizabeth Miller, Ph.D., one of the worlds premier Dracula experts and all-round nice person. Not only did she provide me with research materials and information about Mad Bad Vlad for the prologue, she also wrote the marvelous foreword included here.

To Sherry Gottlieb, fellow novelist, for her (and Bunnys) friendship and her wonderfully wicked suggestion concerning the ending of this book. (Go out and buy Sherrys fabulous police procedural with fangs,
Love Bite
, right now.)

To my brother, Kurt Rumler, for starting this whole damned vampire thing. You see, it was Kurt who, some twenty-eight years ago at the Mariner Hotel in St. Petersburg, shoved a paperback of
Dracula
into my hands and said: Here, kid. Read
this

Absolutely to my agent, Russ Galen. My God, Russ, what would I
do
without you? (I mean, other than make a whole lot less money and have a lot more stress in my life)

And now, the best for last: To our beloved consort of eighteen years, with whom we are well pleased. George, I honestly could not have finished this book without your emotional and literary help. (Okay, so I steal your suggestions all the timebut, hey, I share the money, dont I?) I love you madlyfor your Grecian good looks, your intelligence, your twisted wit, your warmth, your charm, your generosity and delightful desire to spoil mebut mostly because no one else has ever made me feel so thoroughly loved.

Authors note: Let me blow Dr. Elizabeth Millers horn here, since she s too modest to do so herself. President of the Canadian chapter of the Transylvanian Society of Dracula, she is one of the most knowledgeable experts on Vlad Tepes and Dracula around, having written and presented numerous scholarly papers on the subject. At the 1995 World Dracula Congress, she was honored by the Romanian people with the title Baroness of the House of Dracula ; and she is also one of the organizers of the Dracula Centennial, to be held in Los Angeles in August 1997.

The trilogy The Diaries of the Family Dracul, of which
Lord of the Vampires
is the third book, draws from history, legend, and fiction. But it is primarily a work that expands on the text of
Dracula,
by providing a prequel to Stokers narrative, which overlaps with
Dracula
in this present book. The trilogy introduces innovative twists in the familiar plot that serve to fill in what some readers perceive as gaps in the original: Why was Abraham Van Helsing so obsessive about tracking down Dracula? What really happened to the good professors wife and son? What were the origins of the female vampires in Draculas Transylvanian castle? Who was the elusive Arminius? But most significantly, the trilogy creates a prehistory for Count Dracula himself, drawing on the connection between Stokers vampire and the fifteenth-century Wallachian prince Vlad the Impaler (also known as Dracula). As this is not the first (and certainly will not be the last) time that the count and the
voivode
have been fused in fiction (and film), I thought it might be useful to delineate just what the nature of this intriguing connection actually is.

In spite of the attention paid to Vlad by historians both in Romania and the West, he is still to some extent an enigma. Even the name by which he is called is a matter of disagreement. While there is ample evidence that he himself used the sobriquet Dracula (or variations thereof) and was referred to as such in several fifteenth-and sixteenth-century sources, many Romanian historians still insist on using the name Tepes (meaning Impaler), a hardly flattering nickname first assigned to him by Turkish chroniclers. Historians attempting to reconstruct his life have had to sift through numerous printed accounts of his atrocities, many of which are clearly biased, as well as equally biased Romanian oral narratives and legends that paint him as a heroic patriot. There are also conflicting versions about key events, most notably how he was killed and where his remains are buried. But one fact does emerge from all of this material: Whatever Vlad might have been, nowhere is it stated that he was (or was believed to have been) a vampire. That association is clearly the result of the fact that Bram Stoker decided to appropriate the name Dracula for his villainous countmuch to the chagrin of many Romanians, who see the novel as a denigration of one of their national heroes.

But this raises a key question. To what extent did Bram Stoker actually
base
his Count Dracula on Vlad the Impaler? Although for many people today the two have become almost synonymous, the nature of the connection is highly speculative. There is no longer any doubt where Stoker found the name Dracula. We know from his working papers (housed at the Rosenbach Museum in Philadelphia) that by March 1890 he had already started work on the novel, and had even selected a name for his vampireCount Wampyr. We also know that, in the summer of the same year while vacationing at Whitby, he came across the name Dracula in a book that he borrowed from the Whitby Public Library. William Wilkinsons
An Account of the Principalities of Wallachia and Moldavia
(1820) contains a few brief references to a Voivode Dracula (never referred to as Vlad) who crossed the Danube and attacked Turkish troops. But what seems to have attracted Stoker was a footnote in which Wilkinson states that
Dracula
in the Wallachian language means Devil. Stoker supplemented this with scraps of Romanian history from other sources (which he carefully listed in his notes) and fleshed out a history for his Count Dracula. Wilkinson is Stokers only
known
source for information on the historical namesake. Everything else is speculation.

And there is plenty, some of it rather far-fetched. For example, it has been suggested that Stoker drew the concept of the staking of a vampire from his knowledge of Vlads penchant for impaling his enemies on stakes; that Renfields fondness for insects and small animals is a reenactment of Vlads habit of torturing small animals while he was held prisoner in Hungary; or that Count Dracula is repelled by holy symbols because Vlad betrayed the Orthodox Church by converting to Roman Catholicism. Such speculation has arisen from a basic assumption (yet to be proved conclusively) that Stoker knew much more about Vlad than what he read in Wilkinson; that his other major sources were the Hungarian professor Arminius Vambery, and his own readings in the British Museum (both of which are indirectly alluded to in the novel).

Much has been written of what Stoker may have learned from Vambery. Claims have been made that Vambery supplied Stoker with information on Transylvania, vampire lore, and Vlad himself; some suggest that Vambery may even have introduced Stoker to some of the fifteenth-century materials about Vlad. But all of this is speculation based on circumstantial evidence. We do know that the two met at least twice. While we do have a record of these meetings (Stoker refers to both in his 1906 book
Personal Reminiscences of Henry Irving),
there is nothing to indicate that the conversation included Vlad, vampires, or even Transylvania. Furthermore, there is no record of any other correspondence between Stoker and Vambery, nor is Vambery mentioned in Stokers notes for
Dracula.
As for the theory that what Van Helsing in the novel learns from Arminius (the character is generally seen as a tribute to Vambery) parallels what Stoker himself gleaned from the Hungarian, just about every scrap of this material can readily be traced to Stokers known sources.

While Stoker did conduct some research at the British Museum, there is no evidence to indicate that he discovered further material about the historical Dracula. Much speculation surrounds the possibility that he may have gained access to one of the fifteenth-century German pamphlets about Vlad the Impaler featuring a woodcut portrait accompanied by the caption A wondrous and frightening story about a great bloodthirsty berserker called Dracula. This has led some to conclude that Stokers physical description of Count Dracula is actually based on this portrait of Vlad. But again, the concrete evidence just is not there. It is much more likely that Stoker drew the description of Count Dracula from earlier villains in Gothic literature, or even from his own employer, Henry Icving.

Count Dracula, as Van Helsing tells us, must have been that Voivode Dracula who won his name against the Turk. Indeed he was! But it is significant that nowhere in Stokers novel is Dracula referred to as Vlad, nor is there any reference to Vlads famous atrocities, in particular his use of impalement as his favorite means of execution. Why would Stokera writer who meticulously included detail after detail (some very insignificant and obscure) from his known sourcesignore something that would have added so much to the delineation of his villain? Either he knew more and chose not to use it, or he used what he knew. Pending much more concrete evidence than has to date been unearthed, I would accept the latter. All we know for certain is that Stoker found the name Dracula in Wilkinson, obviously liked it, and decided to use it.

The fusing of fact and fiction, while of questionable merit in reconstructing history, is a superb tool in the hands of an imaginative writer. As we today know much more than Stoker about Vlad the Impaler (thanks primarily to the work of Radu Florescu and Raymond McNally), it is hardly surprising that the count and the
voivode
have merged. The most noted occurrence in film is in Francis Ford Coppolas 1992 rendition
Bram Stokers Dracula,
though a connection between the vampire count and his historical namesake had been made almost twenty years earlier in the Dan Curtis production of
Dracula
with Jack Palance. Examples of the fusion in fiction are numerous, including such novels as
Anno Dracula
and
The Bloody Red Baron
(Kim Newman),
Children of the Night
(Dan Simmons), the trilogy Dracula Lives! (Peter Tremayne),
Drakulya
(Earl Lee), and this present trilogy. Fiction has made Vlad what he never was in lifea vampire and has thus granted him, like his fictional counterpart, immortality.