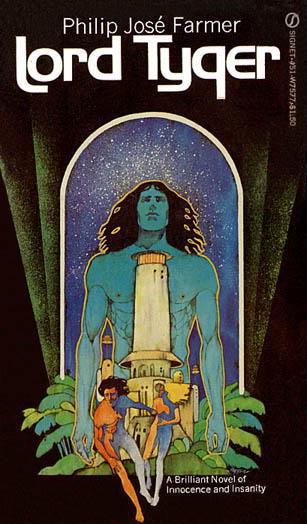 Tales of the Wold Newton Universe

SECRETS OF THE NINE: PARALLEL UNIVERSE

Lord of the Trees

The Wind Whales of Ishmael

Venus on the Half-Shell

Did you enjoy this book? We love to hear from our readers.

Please email us at
[email protected]
or write to us at Reader Feedback at the above address.

To receive advance information, news, competitions, and exclusive offers online, please sign up for the Titan newsletter on our website

This story is dedicated to Edgar Rice Burroughs, without whom my childhood and youth would have been inestimably deprived and colorless, and to Vernell Coriell, a Lord Tyger in his own right.

Philip Jose Farmer is one of the greatest, and in some ways, most neglected writers of science fiction, or for that matter, any fiction. This is not to say he is totally unknown. He is respected, but his work was often outre and outside the parameters of conventional science fiction, or for that matter, mainstream fiction. And since in the field of science fiction he was so far ahead of the curve, his work didn't get the kind of attention it should have in his lifetime. Truth to tell, at the time Farmer was writing, science fiction was still behind the times when it came to the themes and prose of modern fiction. Those doors to connecting with the wider world of literature were just beginning to open, and in fact, Farmer was one of those, perhaps the most important one, holding the door.

Farmer's influences were not only science fiction writers, primarily Edgar Rice Burroughs, but also writers like Jack London, William S. Burroughs, James Joyce and Kurt Vonnegut, and... Well, the list is endless, and while we're on the list, a
number of those writers, not thought of as SF writers, did from time to time touch on the furniture of SF. But the bottom line here is Farmer was very well read, not only in his beloved pulp literature, but in classic literature, psychology and anthropology as well. All of these things became part of his work.

Farmer was one of the kindest and gentlest of men. I met him several times and exchanged a few bits of mail with him, and had a very nice day at his house in Peoria once. He was the sort of guy who looked like he might be a small town schoolteacher, or editor of a weekly newspaper. He was quiet and easy to talk to. We once had a wonderful conversation about Jack London that revealed to me that not only was Farmer a great appreciator of fiction, he was someone who looked behind the words to see exactly what it was that propped them up. When he wrote, he pulled those props out from behind the words, and showed us that they were often bloody corpses, rabid sexual desires, and twisted views on the nature of the universe. Farmer may have been quiet in his life, but he was as savage as Tarzan in his work.

Having to turn out so many stories and novels, due to the low payment of science fiction, made his writing uneven, and this may well have had to do with why his deserved reputation has been slower in coming, than say Ray Bradbury, or Kurt Vonnegut or Philip K. Dick.

Sometimes his prose felt dashed off, his ideas not full formed, but at his best, which was much of the time, he wrote beautifully, and interestingly. There were more ideas in a few pages of a Farmer work than were usually presented in volumes by other writers. In fact, his pastiche of Vonnegut's writing, titled
Venus on a Half Shell
, may well have been better fiction than that
written by the writer it was designed to emulate.

Certain themes obsessed Farmer. Sexuality. Primal Man. Pulp heroes; Tarzan in particular. Freudian psychology. Jungian psychology. Experimental fiction. Alternate realities, and time travel. He wrote books that referred to all these subjects, and often times combined them. He was a gleeful wizard whose work threw off sparks and lit the tender of many an imagination.

This book,
Lord Tyger
, is one of the best of his works. It combines the largest number of his obsessions, while never losing that main and most important ingredient of any work of fiction. The magical connection between writer and reader: What happens next.

It is one of his most beautifully and cleverly written creations. It is engaging from beginning to end. It may well be my favorite of his works. It is about a man who wants to make his own Tarzan. It is about the unexpected results of that experiment. It is a book of supposed primal innocence that is not that innocent. It is a book of madness, brilliance, and wicked charm.

It is a book that starts out with one of the finest opening paragraphs ever.

"My mother is an ape. My father is God."

I love it. I recommend it. It is a lucky experience for any discerning reader.

I hope that discerning reader is you.

Joe R. Lansdale is the author of over thirty novels and numerous short stories. Among the awards he has received are the Edgar, the British Fantasy Award, the Grinzane Cavour Prize for Literature, and nine Bram Stokers. He has been acknowledged as a Grandmaster of Horror Writing by the Horror Writers Association, and has received the Lifetime Achievement Award for Horror Fiction. He has also written graphic novels, numerous film scripts, as well as teleplays for
Batman: The Animated Series,
and others. His novella,
Bubba Hotep
was filmed by Don Coscarelli and starred Bruce Campbell and Ossie Davis. Coscarelli also filmed
Incident On and Off a Mountain Road
for an episode of Showtime's
Masters of Horror
, and an independent,
Christmas with the Dead
, based on his short story, directed by Terrill Lee Lankford, is forthcoming in 2012.

"My mother is an ape. My father is God."

I'm going to take a bit of a guess here. A fairly well-educated one, I hope, but nonetheless a guess. I'm going to say that you've not read this novel before, or if you have, it was some time ago. Possibly you were prompted to pick this book up because of its enticing cover, or because you have been buying other titles in Titan's wonderful new series of Philip Jose Farmer books (all hail the completist book collector!). Whatever the reason, congratulations, you have a fantastic story to read or reread, one that Farmer himself rates amongst his best. Sure, readers may come to Farmer because of Riverworld, the World of Tiers, the Ancient Opar books or his biographies
Tarzan Alive
and
Doc Savage: His Apocalyptic Life
, but once they dig further, they find gems like
Lord Tyger
.

Ras Tyger, whose forename means "Lord" in Amharic (the Semitic language spoken in Ethiopia), is a melting pot of
emotion, ability, and thought. He has grown up in the jungle under the care of apelike foster parents and spends his youth exploring his domain, taunting and bedding members of the nearby Wantso village. He is a poet, an artisan, a wooer of women and at the same time he is a hunter, a killer, and a youth driven by the lust of an innocent. He knows he's different and revels in that difference. His white skin marks him as a ghost to the Wantso and Ras plays on this misapprehension to his advantage. As Ras enters adolescence his curiosity forges his course in life. His foster parents try their best to set him on a moral path but Ras is his own man and disobeys with little remorse. In fact he regards the punishment as just deserts, the joy of transgression outweighing the pain of the whipping. For guidance on bringing up their son, Ras's foster parents are given instructions from above, literally. The all-seeing Igziyabher, the "God" who watches over Ras, lives atop a tower set in the middle of a nearby lake. From there Igziyabher issues his commands to Ras's foster parents as he endeavours to guide Ras on the path he wishes his favoured subject to follow to adulthood. Ras naturally develops a healthy interest and curiosity and wants to meet "God." He travels to the lake but his attempts to scale the smooth walls of the tower continually result in failure. However, Ras is getting stronger and bolder by the day and when an unexpected visitor, a beautiful woman, crash-lands in his domain, this provides a further impetus, a catalyst, to find out about himself from the one who created him. And that's when the great adventure starts.

Jack Hammer by Tabatha Vargo, Melissa Andrea
The Dead Play On by Heather Graham
Cauldstane by Gillard, Linda
Monsters and Magicians by Robert Adams
Private Yoga Lessons: Yoga for Beginners. Yoga Poses for Beginners That Will Make Your Dog Go "What The..." by Nicole, Michelle
The Debt Collector by Lynn S. Hightower
Michael Belmont and the Heir of Van Helsing (The Adventures of Michael Belmont) by Erway, Ethan Russell
Now You See Me ... by Jane B. Mason
Homesick by Roshi Fernando
Hotter Horizons by JC Szot
Our partner