Lords of the White Castle 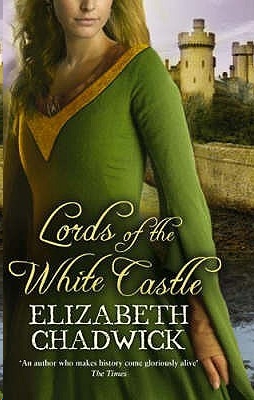 LORDS OF THE WHITE CASTLE

Fulke gazed upon his wife's face, the dark shadows beneath her eyes, the delicacy of brow and cheekbone and jaw. He knew that most of that delicacy was false, that Maude was usually as robust as a horse, but the bearing of three infants in swift succession and the circumstances of her last travail had drained her strength. How could he ask her to live an outlaw's life now when she needed rest and comfort? How could he trail three small children in his wake, the youngest a baby prematurely born? It would be irresponsible and likely end in tragedy. He gnawed on his thumbnail, already bitten down to the quick, and turning from the bed looked at his two daughters who were playing in a corner with Gracia. He had engendered them. Now it was his responsibility to give them a proper life.

First published in Great Britain in 2000

by Little, Brown and Company

This edition published by Warner Books in 2001

All characters in this publication are fictitious and any resemblance to real persons, living
or
dead, is purely coincidental
.

Typeset in Bembo by

As always my thanks go out to the various people who work behind the scenes, but seldom get their name up in lights. To everyone at the Blake Friedmann Literary Agency, including my wonderful agent Carole Blake, who is now an author in her own right after the publication of her book
From Pitch to Publication
on how to go about selling your manuscript.

I would like to thank everyone at Little, Brown, especially my editor Barbara Boote who always delights me by telling me which bits of the novel made her cry! Also to my desk and copy editors, Emma Gibb and Richenda Todd, for dotting the I's and crossing the T'snot to say sorting out the muddle of dates and seasons that several drafts of
Lords
had left in their wake.

Also I would like to express my gratitude to my family, for putting up with me (although it cuts both ways as I have to put up with them!). To the members of
Regia Anglorum
, Conquest and
Conroi de Burnt
for sharing their knowledge and giving me inspiration; the members of Nottingham Writers' Contact for the laughs and support (who can forget Annabel's Antics?); and to the members of
[email protected],egroups. com
and
Medievalenthusiastsfg),
e
groups.com
for chats on my favourite subject!

The Palace of Westminster,

Although it was not much past midday, the murky winter afternoon was already yielding to dusk. The sleety rain, which had put a stop to weapons practice on the sward, peppered against the shutters like glass needles. Every torch and sconce was ablaze, every brazier in use. Beyond their puddles of light and warmth, in the stairwells and dark walkways of Westminster's sprawl of buildings, a dank chill waited to trap those who were foolish enough to step outside without a cloak.

Seated in a window embrasure of the White Hall, Fulke listened to the growl of the wind and buffed his new shield to smooth the scores and scratches sustained that morning. His father had given it to him at Martinmas when Fulke had turned fifteen, a man's accoutrement bearing the FitzWarin device of twelve wolf's teeth blazoned in red. 'Hah, sixes, I win!' cried a triumphant voice. Raising his head from the shield Fulke glanced over at the dice game which was occupying Prince John and the other squires of Ranulf de Glanville's retinue. Money jinked as a curly-haired squire swept a pile of coins from the trestle into the palm of his hand. Prince John, who would be seventeen on the Eve of Christmas, scowled and reached into the pouch at his gilded belt to toss more silver on to the board. His stocky frame was given a certain elegance by a tunic of costly blue wool, but the effect was marred by a petulant slouch.

Fulke might have joined them except that he had but half a silver penny between himself and an empty pouch. Had they been arm wrestling he would have succumbed. Unlike Madame Fortune, skill and brawn were dependable and he possessed an abundance of both.

The other lads had called him bumpkin and clod when he arrived from the Welsh Marches nine months ago. They had stolen his clothes, tripped him on the stairs, and emptied a piss-pot over him while he slept. It had taken them a week to learn the hard way that whatever Fulke received was returned twofold. They still called him bumpkin, but these days it was a nickname, a sign of acceptance into their company, if not their rank.

That he had a position in John's retinue at all was by way of a favour to his father from King Henry who valued the loyalty of the FitzWarin family. Fulke knew that John would never have chosen him for a companion, just as he would never have chosen John. Their similar age was the closest the youths came to having anything in common.

Junglecat Honeymoon: Manhattan Ten, Book 3.5 by Lola Dodge
The Duchesss Tattoo by Daisy Goodwin
Himiko: Warrior by CB Conwy
White Girl Bleed a Lot by Colin Flaherty
The Second Half by Lauraine Snelling
Jog On Fat Barry by Kevin Cotter
(1986) Deadwood by Pete Dexter
Ruthless by Gillian Archer
Under the Apple Tree by Lilian Harry
The Reservoir by Naramore, Rosemarie
Our partner