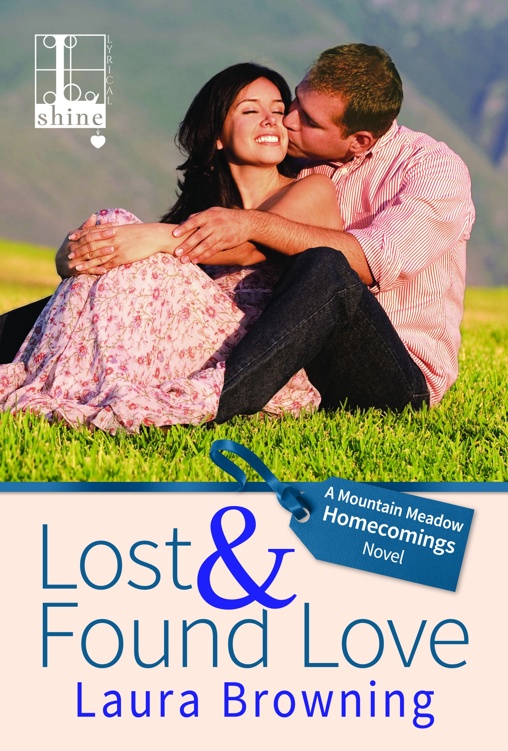 Welcome to Mountain Meadow, Virginia, where homecomings lead to happily ever after…

Tabitha MacVie has come to Mountain Meadow to meet the sister she never knew, and find the family she longs for. What she discovers is a close-knit community determined to close ranks against the new art teacher, especially once she catches the eye of the town’s most eligible bachelor. Tabby tries hard to keep Joe Taylor at a distance. But staying away from the handsome preacher isn’t easy once he opens his arms to her….

Tabby is the answer to Joe’s prayers. Too bad the spirited beauty believes she doesn’t belong in Mountain Meadow—or with him. Still, Joe can’t resist offering her shelter against the local gossips, or giving her a strong shoulder to lean on when her family hopes are dashed. And when Tabby’s life is suddenly on the line, Joe will do anything to save the woman who stole his heart.

The Barlow-Barretts: An American Dynasty

During the edits on this manuscript, life changed for me. My eldest brother, John, passed away quite suddenly. He was the first of the four kids in our family, but John was so much more.

He was my hero. The big brother, who was there to help when I was hurt or sick. He was my protector when it came to getting picked on by the sibling closest to me in age. He was left-handed, like me. I don’t know if I ever thanked him for that hand-me-down baseball glove, but it sure made life easier.

He sat next to me when Jaws first came out, putting up with my clawing him in the arm with my fingernails. Then the next day he went swimming in the ocean with me.

He gave me my first ride on a motorcycle. Later on, he encouraged my interest in bicycling, and even slowed down enough to take rides with me. It didn’t matter that he was a competitive cyclist and I just liked to ride. He was willing to take the time to share that interest with me.

He served his country in the Navy. He was loyal, and responsible, yet he still knew how to have fun. He had a wicked sense of humor and a laugh that could make everyone smile. He loved to travel, but he also loved coming home again.

In a story where finding family is so important, it only makes sense to dedicate it to a man who knew the true value of family. This happily ever after is for you, John.

For a girl who’d grown up in a rundown millhouse, what Tabby stood in front of now was a dream. Best of all, it was hers. The house was a unique blend of colors. A rich, rusty red exterior with creamy yellow shutters and lacy wood trim, which betrayed its Victorian origins. The rounded left front, with its big bay windows on the first and second floors, reminded Tabby of the tower on a castle. The third floor was tucked under a steeply pitched roof, and at ground level, a wide, covered veranda wrapped around the front and side. Tabby gazed at it with a smile. It was exactly like the picture the real estate agent had sent her. Good thing. She’d bought it, sight unseen, in an Internet auction.

The purchase was a win-win situation for Tabby and the former owner. The elderly woman had taken the proceeds and moved into the Mountain Meadow Retirement Community. She was free from caring for such a huge home, and Tabby had gotten a great deal.

With her cat carrier in her left hand, Tabby unlocked the heavy front door and wandered inside. Her artist’s eye quickly circled the high-ceilinged front hall, the living room on one side, and the dining room on the other. The house had possibilities. Even the furnishings would work with a colorful throw here and a few accent pillows there. Since the previous owner had little use in her new patio home for most of the furniture, she had thrown what she didn’t need into the deal.

At a sound behind her, Tabby turned. A leggy boy with long, dark brown hair shifted from foot to foot. His grin alone was enough to light up the room, even without the sunshine streaming through the lacy curtains.

“Who are you?” she asked. “My one-man welcoming committee?”

“Tyler Morgan. I do odd jobs at Tarpley’s…uh…Mountain Meadow General Store, but most folks around here call it Tarpley’s. They—that’s Mr. and Mrs. Tarpley—sent me over with a box of groceries for you. Said it should get you started till you have a chance to stop in.”

Tabby glanced from the box to the boy with his warm brown eyes.
Was this place for real?
She’d grown up around Asheville, North Carolina where folks were friendly, but not like this.

“Thanks, Tyler. That was thoughtful of you and the…Tarpleys was it?”

“Yeah.” He smiled with a trace of shyness. “You’re Miss MacVie, aren’t you? The new art teacher?”

Tabby nodded. It seemed a quiet, unobtrusive arrival was out of the question. Another difference to keep in mind about such a small community. Someone new around here was news. Not exactly what she wanted to be. “Yes.”

“Cool.” He grinned, the shyness disappearing. “I like art way better than math and science, but not as good as English.”

Tabby laughed. “Maybe I can change your mind.”

“What’s in the pet carrier?” He craned his neck to see.

Tabby held it so he could. “My cat. Katie Scarlett…Katie for short.”

Tyler’s eyes rounded, and he laughed. “She looks like you—black hair and gold eyes too. Can I take the groceries back to the kitchen for you?”

While doing her student teaching, Tabby had gotten used to the lightning fast conversational changes children always seemed to make.

“If you don’t mind. You caught me just walking in for the first time.” She followed him, since he already seemed to know his way around the house. If all her welcomes were this warm, then the task her mother had given her should be easy. Tabby sucked in a deep, cleansing breath of relief.

They put the groceries away. Tyler pointed to the kitchen door that led out to the back corner of the veranda. “It will be easier to unload your car and come in this door. You can go up the back stairs. I can help.”

“You sure don’t have much stuff,” he commented as he looked at her open trunk.

Tabby laughed again, finding it so much easier to relax here. “I just got out of college, so no, I don’t. Just my clothes, my bike, and my art supplies.” As Tyler made a move to grab a stack of canvases, Tabby stopped him with a smile and a gentle hand on his shoulder. “I’ll get those. You carry my case there with my paints and brushes. We’ll take everything to the top floor.”

After they’d unloaded, she opened her wallet, but Tyler shook his head. “Holly and Jake, my sister and her husband, would kill me if I took money for being neighborly.”

Tabby’s eyes widened. This place couldn’t be for real. She felt like she’d walked into
The Andy Griffith Show
with Tyler as a cuter, twenty-first
century version of Opie. “Well thanks then, Tyler. I guess I’ll see you in a week, or sooner.”

With a wave, the boy sprinted out the door and down the walk, no doubt on his way to tell everyone, including the mysterious Tarpleys, that he had actually met the new art teacher. Tabby smiled. She could get to like this town if Tyler and the Tarpleys were any example of what to expect. If the one welcome she really wanted was just as warm, Tabby could easily call Mountain Meadow home.

Joe studied the two sulky combatants as they faced him from the other side of his desk. As Pastor Joe, head of the town’s largest Baptist church, he had mediated many disagreements. This one between Hannah Hairston and Charlie Gardner was just the latest in a long line. The two had been at each other since the Christmas pageant last year when Charlie had knocked Hannah’s halo off. The latest problem was a dispute over glue and scissors in the first grade vacation bible school group. The teenager in charge of the class called Joe in for help when it looked as if the problem was escalating.

They both nodded. Joe worked hard to keep the smile off his face.

Charlie nodded, and Hannah did, too, but then she asked suspiciously, “What if I want the glue back, Pastor Joe?”

Joe looked at Molly Saunders and said gently, “Well then you give it to Molly, and she will help you exchange it. How about that?”

Molly’s look of gratitude also revealed a bit of the crush he feared she still harbored. “Thanks, Pastor Joe.”

It was opening day of a week’s worth of vacation bible school. Joe recruited his high school students to assist with the younger kids during the day, and in the evenings, he met with the teenagers. Joe watched Molly leave with the two children in tow. He loved his job, and he loved the area, but lately discontent nagged him. It had started last Christmas right after the ceasefire between the Presbyterian and Baptist church ladies.

He’d watched Jake, the town’s police chief, and Holly Allred settle into their marriage, and seen the love and trust restored to Evan Richardson and Jenny Owens, one of the rural area’s few doctors. The two couples had forged strong, loving relationships, even marrying in a double ceremony. The wedding had been short notice, but the Allreds had been out in force. Jenny had no family, and Evan was alienated from his. Still, it had been a joyous affair.

Tempt (Take It Off) by Hebert, Cambria
One Night Stand by Parker Kincade
Bocetos californianos by Bret Harte
Cheating Death Stealing Life by Eddie Guerrero
No! I Don’t Need Reading Glasses! by Virginia Ironside
Mr. Terupt Falls Again by Rob Buyea
That’s How I Roll: A Novel by Vachss, Andrew
Breaking the Line by David Donachie
Because the Night (The Night Songs Collection) by Strassel, Kristen
Arriving at Your Own Door: 108 Lessons in Mindfulness by Jon Kabat-Zinn
Our partner