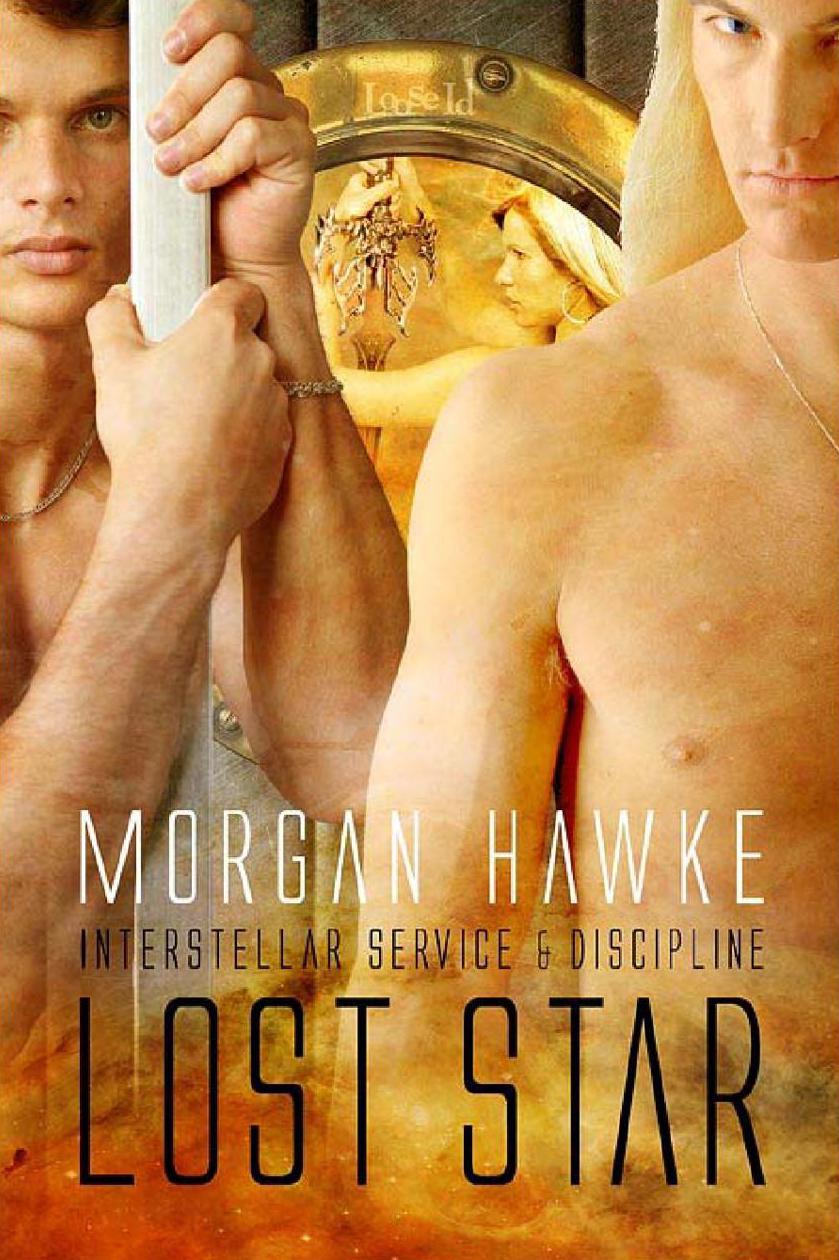 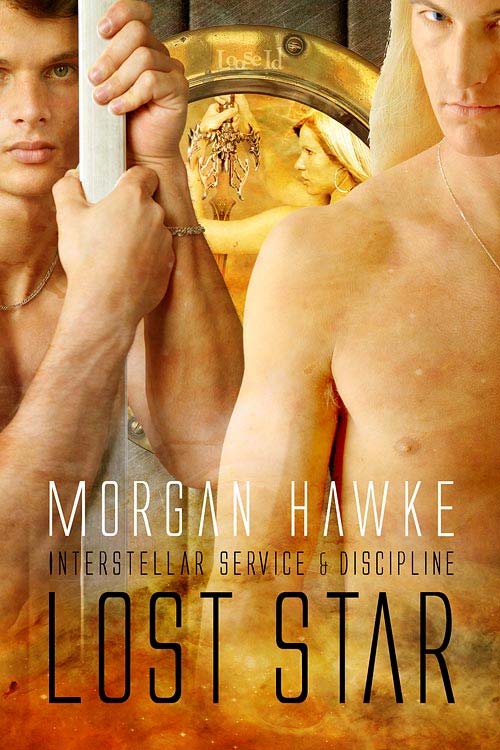 This e-book contains sexually explicit scenes and adult language and may be
considered offensive to some readers. Loose Id® e-books are for sale to adults ONLY,
as defined by the laws of the country in which you made your purchase. Please store
your files wisely, where they cannot be accessed by under-aged readers.

All rights reserved. This copy is intended for the purchaser of this e-book ONLY. No part of this e-book may be reproduced, scanned, or distributed in any printed or electronic form without prior written permission from Loose Id LLC. Please do not participate in or encourage piracy of copyrighted materials in violation of the author’s rights. Purchase only authorized editions.

Although the author defines all of the Skeldhi words used in this story, we have included a detailed list of Skeldhi words in an appendix at the end of the book.

“
Look, you rusting pile of antique junk! I’m trying to save your ass here! Let me in
!”

Aubrey grabbed his throat, gasping for breath, and choked. The air on the freighter’s subengineering deck was thick and foul with smoke from melted metal and fused wiring. “Morris!
Are you listening to me
?” He slammed his bruised fist against the control console, nearly knocking over the small light he’d rigged. Most of the lights had gone out in the first hit from the marauders. He didn’t want to think about how close they had come to losing all life support too.

“
I hear you, tech-engineer
.” The ship’s tired and masculine mind-voice shimmered with a touch of annoyance across the wire jacked into the back of Aubrey’s skull. “
You
do not have clearance for access. You are not the nav-pilot
.”

Aubrey fought to calm his beating heart, not that his heart was listening. “Morris,
your nav-pilot is dead. He’s dead with everyone else that was on your bridge during that first
volley. If you don’t let me in, we’ll be boarded, and you’ll be torn apart for scrap
!”

“
I am already…scrap
.” Crushing depression and electronic interference colored the electronic mind-voice.

“
I know you’re old, Fate, damn you! But you’re not dead yet
!” Aubrey scrubbed a hand through what little hair he had left, nearly dislodging the jack in the back of his skull.

Damned military-issue buzz cut freaking itched. He leaned over the panel. “Morris,
please! Let me in! There isn’t anybody else with an array to talk to you, and I’m not fucking
ready to die
!” His breath hitched. Fate, he hadn’t even reached the legal age to drink. He closed his stinging eyes and took a deep breath. “
And neither are the rest of the men on this
ship. If you want to die, then fine, die! But let me save the ones who want to live first
!”

Aubrey held his breath. Apparently, his comment about letting the crew die had pissed the ship off. That was good, very good. There was still a chance. If he could get 2

access to the ship’s controls, he could use the freighter’s fully functional pulse cannons to clear a hole and try for a jump. If the ship didn’t kill him with a power burst instead.

Information slammed into his skull to become sight, sound, taste, smell…and pain, hideous, wrenching pain. Aubrey gasped and dropped to his knees. The ship was in agony. There were gaping holes all over the hull. Wounds that bled air, water, and bodies… Bodies of people he knew.

Sheer stubborn will and deep terror forced him back up onto his feet. He ignored the itch of tears streaking down his smoke-smeared face and threw every code he had into the ship’s controls, grabbing for anything that still worked.

He found everybody still breathing and began opening doors, making safe passages for the crew to get deeper into the ship where he could do something about maintaining life support.

At the same time, he activated the pulse cannons and aimed them at the corsair closing in on the starboard side. He knew that at this close range, he was going to damage the freighter more, but he could not afford to let the marauders board. They were only a small freighter with no military personnel capable of defending them, none still alive anyway. Once the marauders got in, the game was over. They were utterly defenseless.

The pulse cannons burned a surgically precise hole right through the attacking ship’s engineering core. The sensors delivered a low casualty rating from the other ship, but all maneuver controls were off-line.

The attacking ship veered off course, diving right under them.

Aubrey shouted in triumph. “That’s right, you stupid-assed shit-heels! The body manning these cannons actually knows what to fucking hit!” Abruptly, he lost clear sight of the second corsair. The ship’s sensors were going out on the keel. They were in deep trouble if he didn’t get them back in view.

Information trickled in from the remaining corsair. It was a sentience-to-sentience communication. It was meant to be hidden from the nav-pilot.

Aubrey smiled grimly. If he’d had a piloting array he would have missed it, but he didn’t. He had a programming array. His ability to interpret the ship’s complete interior and exterior data was somewhat limited, nothing compared to the near-physical connection a nav-pilot had. On the other hand, what he did have was one of the most complete mind-to-mind connections one could get with a ship.

And he’d been a very bad boy before the Agency had caught up with him.

He intercepted the communication without even trying. At the same time, he worked feverishly to reroute power to the sensors so he could see well enough to get a nice, clean shot on the corsair dangerously close to his keel.

His personally doctored programs read the encrypted communications with pathetic ease. Those same programs were the reason he had been arrested and penal chipped, but they continued to prove useful every now and again.

The only reason the Agency hadn’t fried his ass when they finally caught him was because he’d been underage, a minor, with no fatalities to his name. Instead, the Agency had offered him the chance to work off his sentence using his programming tech talents on whatever ship they posted him to.

It was that or a memory wipe.

He’d been grateful for the chance to keep all his hard-won codes and skills, and it had gotten him off-planet. As far as he was concerned, getting off that industrial waste of a planet had been worth being penal chipped.

The past two and a half Imperial standard years of being passed from ship to ship as a programming tech-engineer hadn’t been all that hard. The food sucked, but the work was simplistic compared to the programming stuff he’d done for sheer entertainment. The bulk of it was system updates. His mouth occasionally got him into trouble, but his rating as a minor had saved his ass from more than one disciplinary reaming. He smiled sourly. Thank the Fates for a scrawny, graceless build that made him look years younger than he actually was.

He only had six more months till the end of his sentence…and his legal majority.

Once he was free of the penal chip in the back of his skull, he had a nice, long, well-paying career ahead of him. He planned to get thoroughly drunk and thoroughly laid to celebrate his new life as a free man. If he lived that long. He sighed and focused on the coded communications being relayed.

The corsair was inquiring about damages.

Morris
offered his external damage report and the fact that his nav-pilot was dead, without mentioning that they were still jump capable.

Aubrey grinned. Apparently
Morris
wasn’t ready to give up yet.

He nodded. The other ship was trying to make some kind of a deal. That was pretty much expected. Obviously, they were after the ship’s experienced sentience.

There wasn’t a damned thing on this old freighter that would interest marauders. They weren’t carrying weapons.

No survivors?
Aubrey sucked in a breath. But there were some seventy-odd people still breathing on this ship? He shot a line of data toward the other ship, describing his survivors.

What?
Aubrey frowned. That had to have been a misinterpretation of the coded transmission. He inserted a message into the encrypted communication.
Please repeat last
transmission
.

“
No survivors. Disengage all life support
.”

Aubrey gasped.
Son of a fucking bitch!
They wanted
Morris
to kill every living person on this ship? He ground his teeth.
Fuck that shit!
Out of sheer temper, he slammed a hijack code he’d made to catch small yachts for joyrides into the ships’

connecting data stream. To get it past the preliminary firewalls, he added a doctored breaker-code and aimed the whole mess straight for their engineering console, bypassing their nav-pilot.

He’d been a very,
very
bad boy before the Agency nailed him.

Aubrey figured that the breaker code wouldn’t make it very far. The other craft was far more sophisticated than the yachts the code was designed for, but he figured he’d at least cause enough trouble to make a limping escape.

The other ship’s data poured into his skull. Suddenly his vision of
Morris
and both corsairs was crystal clear. Aubrey gasped.
Holy shit!
He’d actually made connection.

A stream of bitching howled across the data stream.

Aubrey choked out a laugh. There was a very pissed-off nav-pilot at the far end who had somehow found himself locked out of his own ship. Aubrey licked his dry lips and grabbed for control, telling the other ship to turn its ass around and make for jump.

It was the only thing he could think of.

The ship fought his control. He wasn’t giving it the right directives.

The other ship turned away, and their jump engines came online.

It was working? Aubrey rubbed sweat from his brow with his arm and checked his connection. It was solid. The other ship
was
taking his orders. Fate be damned, it was working! He threw back his head and shouted, “Take that, you rat bastards!” He hooted and punched the air, nearly knocking the cord from his skull jack. If there had been room to jump up and down, he would have done it.

Energy pulsed as folds of space unraveled and a third corsair wavered into local space nearly on their nose.

Every sensor on the ship burned white-hot, scoured by the energy backwash as space snapped back into place around the corsair catching
Morris
in the rebound.