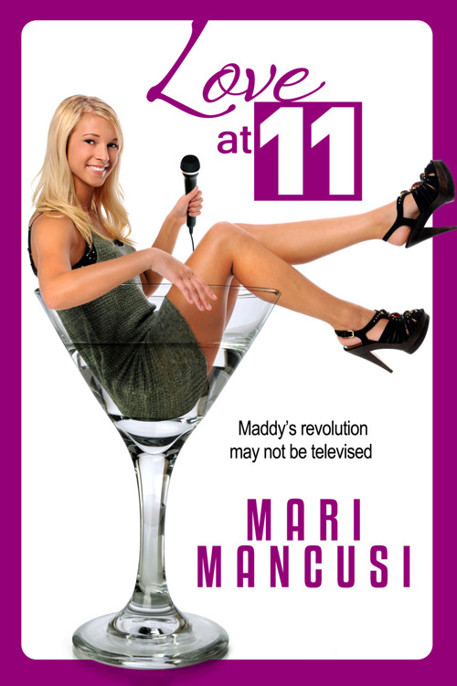 Writers struggle to support themselves. Please help them by buying their books from legitimate sources. The scanning, uploading and distribution of this book via the internet or any other means without the permission of the publisher is illegal and punishable by law. Please purchase only authorized electronic editions, and do not participate in or encourage electronic piracy of copyrighted materials. Your support of the author’s rights is appreciated.

PRAISE FOR LOVE AT 11

“Zany, humorously flippant and surprisingly emotionally moving amidst the chaos of modern life!”

“Mari Mancusi has a great sense of humor and isn’t afraid to use it.”

—Once Upon a Romance

“Another winner from Mari Mancusi.”

I still couldn’t believe I was actually doing this.

Clutching the videotape in one trembling hand, I strode down the hallway, heading for what in the TV news world we called Receive. The place where my story could broadcast to the world. Well, at least the world of San Diego. Receive was the gateway to the airwaves, and its guardians had no idea what they were about to let loose.

In just minutes, my five-year career at News 9 would be over forever. Heck, they’d probably blacklist me from ever setting foot in a TV station again. My dream of working at
Newsline
would never come true. But it didn’t matter. I didn’t want to work in a business that was as corrupt as I’d recently determined it to be.

My heart slammed against my rib cage as I pushed open the door. The Receive coordinator gave me a stressed smile before going back to organizing the videotapes for tonight’s broadcast. I smiled back, knowing from her look that no one had time to check to see what was on the tape I delivered.

I took a deep breath. This was it.

“This is for you, Lulu,” I whispered to myself, then handed the coordinator the tape. “Here’s tonight’s feature story. ‘Cosmetics That Kill.’”

“Great,” she smiled, filing the tape in its appropriate slot for the five o’clock news. “Thanks, Maddy.”

Thank you for your story idea about how dangerous blind spots behind SUVs have caused parents to inadvertently back over their own children––striking them down in their very drive—way. It’s distressing to hear that more than 72 kids died last year alone in this horrific manner.

But after talking it over with the promotions department, we think it’d be better if you could just stick with the “Cosmetics That Kill” story we assigned you last week.

I pressed “delete” and leaned back in my squeaky cubicle chair, suppressing a long sigh of frustration.

Why was I even surprised?

After five years of working as an assistant producer at “if it bleeds, it leads” News 9, I knew I should have been used to the rejection of thought-provoking, legitimate stories in exchange for sensationalistic trash. I should have been content pitching the plastic surgery, the diet, the who-is-Paris-Hilton-sleeping-with-now stories.

I was a glutton for punishment.

I should have known that my boss Laura didn’t want to do a story about SUVs with dangerous blind spots. News 9 aired advertisements for those same SUVs during its commercial breaks. Paid advertisements. It was simple as that.

The voice of my coworker and best friend Jodi brought me back from my job-induced doom and gloom. Spinning around in my chair, I watched the five-ten blonde plop herself down at my cubicle-mate’s vacant desk and look at me with concerned eyes.

“Oh, nothing. Just the usual,” I said with a shrug. “Typical day at News Nine, San Diego.”

“Uh-oh.” Jodi grinned. “I know that look. What is it this time? Deadly Dishwashers? Perilous Pets? Killer Clay?” she mocked in her best TV newsman voice.

“Killer Clay was last month,” I reminded her. “This episode of the fabulous
Household Products That Kill
series features murderous makeup.”

I swatted at her with the back of my hand.

“I mean, don’t get me wrong,” I said. “It’s not that I’m against informing the public against the hidden dangers of Mary Kay and the rest. It’s just that as far as I can tell cosmetics simply don’t kill. Ever. Like, in the history of cosmetics there hasn’t been a single fatality.”

“Did you look up ancient Egypt? I read once that they wore makeup. Maybe someone crushed up a poison berry or something.”

I rolled my eyes, not even dignifying that with a response.

The problem was, the powers-that-be at News 9 didn’t care that cosmetics didn’t actually kill; it sounded good in the promo and that was all that mattered. If the station could convince the twenty-four- to fifty-five-year-old woman who planned to go to bed after she saw who got fired, kicked off the island, or brutally humiliated by an arrogant Brit named Simon, to stay up and watch the evening news, that was enough. And they believed scaring her half to death was the best way to accomplish this goal.

Five years ago, I, Maddy Madison, graduated from the ivory tower of journalistic ethics, Columbia University, ready to save the world. Expose the bad guys. Right society’s wrongs. Be the voice of truth in a sea of lies.

Boy, was I an idiot.

Anyone who thinks TV news has anything—and I mean
anything
—to do with journalism should take a major reality pill. Our business is entertainment. Period.

Except on those network TV magazine shows. Like
60 Minutes
,
20/20
,
48 Hours
or my favorite—
Newsline
.
Newsline
did important stories. They uncovered scandals and weren’t afraid to name the bad guys. It’d been my dream to become a producer for
Newsline
ever since their star investigative reporter Diane Dickson came to speak at my high school ten years ago. She’d been so cool. So smart. So polished and important. So into real journalism and ethics and all that stuff. I’d hero-worshiped her ever since.

So, I continued to toil away at local news producing, honing my résumé videotape and hoping that someday I’d have enough experience to be worthy of walking the same halls as Diane and the gang.

Hey, a girl could dream.

“I’ve got some news that may cheer you up,” Jodi announced.

“Oh?” I asked, crossing my fingers for jelly donuts at the assignment desk.

“They hired a new photographer. And he’s to
die
for!”

“Perfect.” I grinned. “I’d been thinking of pitching ‘Fatal Photographers’ at the next story meeting. Do you think he’ll agree to be interviewed?”

“Easy, tiger,” I warned. “You’re taken, remember?” Jodi, a dog freak, met the man of her dreams a couple years back on Dog Beach, a pet friendly patch of sand on the northern border of San Diego’s Ocean Beach. Her three male Great Danes came bounding over to sniff the butt of his delicate female Italian greyhound, and the rest, as they say, was history. The two got married a year ago and live happily ever after, squashed into a hair-infested, Great Dane/Italian greyhound-filled bungalow on the shores of Ocean Beach. Luckily, neither could afford much furniture.

“But you’re still single,” Jodi reminded me with a sly smile, brushing dog hair from her otherwise adorable black sweater.

Typical. She was
always
trying to set me up, so I’d have a fourth wheel to balance things when we all went out. In fact, she was so desperate for me to get a boyfriend she’d been less than selective with her set-ups than I might have desired.

I mean, sure there’s probably a woman out there for the guy who thought a replica Captain Kirk uniform was proper attire for a first date. And I imagine it’ll be quite simple for that man with a penchant for farting at dinner to find the woman who better appreciates his bodily functions. And the guy who was so cheap he made me write an IOU when I needed a quarter for the bubblegum machine? I bet his Mrs. Right’s just around the corner.

So when Jodi got that excited matchmaking gleam in her blue eyes, my guard immediately went up.

“Go see for yourself. He’s in the newsroom.”

“I don’t know. I’ve got to go work on ‘Cosmetics That Kill.’ It edits Tuesday and I’ve yet to find a single person who will agree to be interviewed on the topic.” Jodi put on a mock pout. “Fine. Go ahead and work. But when Christine in sales snatches this one, you’ll be sorry you didn’t get to him first.”

I was saved by the bell—my phone rang. I hesitated before picking up the receiver: It was an inside ring, which meant someone somewhere in the building wanted something from me. This could be as simple as “Where’s the tease for last night’s story?” or as bad as “You’re fired, pack up your desk and leave.” That’s how it worked at News 9.

Curiosity won out over common sense and I put the receiver to my ear. “This is Maddy.”

“Madeline, this is Richard. Can you come down to my office for a moment?”

It was the news director. While Laura was the executive producer of our department, Richard was the big boss of the entire newsroom. He wasn’t a tyrant or anything, but no one wanted to be called down to his office. It was like being sent to the principal—and never turned out well. My hand shook a little as I set the receiver back in its cradle.

What could he want from me? Were the ratings for “Killer Clay” bad? Had he decided to replace me with a twenty-two-year-old natural blonde? (As a twenty-seven-year-old bottled blonde at News 9, I was already getting over the hill.) Or, maybe he was promoting me. Maybe for some incomprehensible reason he’d thought “Killer Clay” was Emmy-worthy and he wanted me to take Laura’s job.

Yeah, right. And maybe they’d raised the
Titanic
, too. The only way to find out was to go down to the newsroom. I rose from my chair, told Jodi I had to leave, and headed from our Special Projects alcove to the massive Newsplex below.