Love in a Carry-On Bag 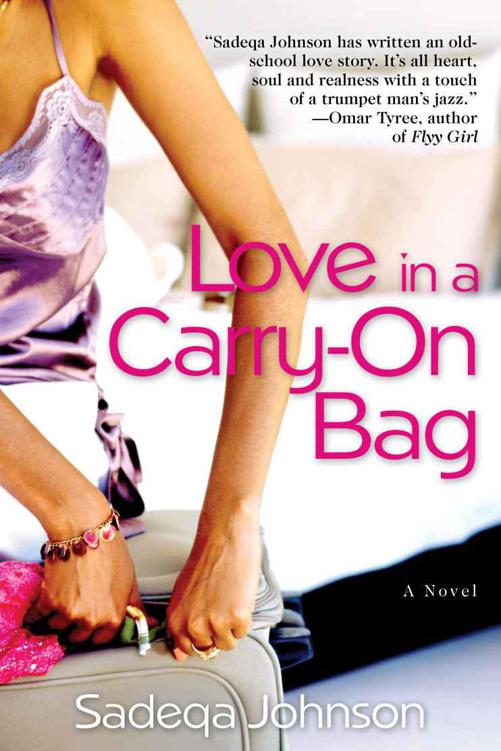 All rights reserved. This book, or parts thereof, may not be reproduced in any form without permission.

In loving memory of:

William T. Murray,who said that one day I would be the monkey

that stopped the show.

I still have your back.

T
hank you, Heavenly Father,
for using me to touch the lives of others. To my father, Tyrone Murray, for raising me to be strong, brilliant and true to my creative self, and to my mother, Nancy Murray, for your overwhelming love and support. My second mother, Francine Cross Murray, you complement our family so well, lots of love. I’m grateful to my mother-in-law, Paula Johnson, for mothering me and my children, and for her thoughtful edits of this book. To Tauja, Nadiyah and Talib Murray for being the greatest siblings a girl could have. To Geraldine Murray and Yvonne Clair for your nourishment. To my in-laws, Marise, David, Michelle, Pacita, Nneka and Kris for letting me in. Ilov Grate and Zurn Porter, HOOTY-HOO. Shaunte Durham, Maudjah Henriquez Francis, Tonya Smith, Ranesha Hunt and the Right Away Bail Bonds crew, thanks for believing. Thanks to my writing group, The Furious Flowers, for being true. My sister circle—Althea Aikens, Dana Cobbs, Monique Moody and Valerie Hopkins—for waving your pom poms. My Tuesday night meditation circle and Sensei Haress Goodson for giving me a stage. Maisha Johnson for getting me out of the house, and the Scholastic crew, hugs.

To my teachers: Marilyn Ducksworth, angel Bebe Moore Campbell, Benilde Little and Jackson Taylor—who taught me how to make it sound good. To Dara Stewart and Gilda Squire for the sound advice, Dawn Hardy for creating magic, and Mary Brown for your wonderful graphic designs and patience. To my Queen Bee editor, Cherise Fisher, for giving me confidence, courage and the connections that I needed, and pushing me to go deeper—period. You have restored my faith, thank you.

To my beloved children: Miles, for telling everyone that his mother is about to be a famous author; Zora, for demanding that I work harder and keeping me cute; and Lena for those infectious hugs and smiles—all that I am is because of you. Thanks to Swara, Janelle, Britni, Alexis and Rodganya for looking after my precious gems. To all of the supporters of my blog who cheered me up and on.

It is with extreme gratitude that I thank my husband, Glenn Johnson, for drying my tears and sitting me back at my computer when I had enough. It was you who called me an author when I insisted that I was just a writer. Your unwavering belief has gotten us here. Yin and yang, baby. Thank you.

To love is to make of one’s heart a swinging door.

Erica knew she shouldn’t
have answered the telephone. She was already running late for her train from New York to D.C. Her carry-on was propped next to her office door, her desk had been tidied and the computer was shut down for the day. But in her haste to get out of the office, she dropped a manuscript all over the floor. She was on her knees reordering the pages when the call came. Her initial thought was to let her assistant, Prudence, pick up, but by the fourth ring it was apparent that she had stepped away from her cubicle. Letting it roll to voicemail was another option, but something told her to answer it. Daughter’s intuition maybe. The moment she heard her mother’s breathy voice, she regretted her decision.

“Slim, the heater’s out again,” her mother belched. “Mr. Handy down the street said he’d fix it, but I won’t have money ’til Tues-dee and it’s cold as the dickens in here.”

“That’s nice, glad to see you guys making it work. What ya’ll been dating, a year?”

“Well can you just stop at the bank real quick? My back’s aching from the cold and I ain’t goin’ make it through the night with just blankets.”

Erica should have been immune to her mother’s needs by now. The last time she cried for money it was because her electricity was shut off and Erica had to shell out for the six months that was past due. Before that, there was a leak in the roof. The decayed tooth back in February had Erica on a monthly payment plan, and last week there was the ingrown toenail that needed to be removed before it caused gangrene. Her mother had more problems than a prostitute on her way to jail. But once again Erica gave in. It was just easier than arguing with her.

“How much you need?”

“Said he’d do it for sixty bucks.”

“Ma, I want it back. My rent is due and you still owe me from the last time.”

“I’m selling my percocets after I go to the doctor’s on Tues-dee. I’ll give it all to you then.”

Erica stuffed the manuscript in her shoulder bag and flipped off the light in her office. Even though the bank was a half block from her job, it was Friday and the teller’s line snaked without mercy. A grayed woman with a walker and too many plastic bags slow-footed it in front of her and the room felt like the thermostat was stuck at ninety degrees. After transferring the sixty dollars from her account to her mother’s, Erica speed walked the two blocks to the 1/9 subway station only to watch three jammed packed trains pass her by.

By now, she knew she had missed her Amtrak. The thought of disappointing Warren pained her so much, she shelled out an additional seventy-five bucks for the Northeast Corridor Accela express leaving in an hour. She was going to be two hours late, but with any luck, the venue would be operating on colored people’s time, so maybe she’d catch some of his performance.

By the time she hopped out of the taxicab in the Adams Morgan section of D.C., anxiety had taken over her belly. She hurried down the steep steps of the basement jazz club, making careful not to catch her four-inch heels in the metal grooves, and stepped through the heavy velvet curtains that separated the entranceway from the ground floor into the darkened room.

Warren had left her ticket at the door. While the coat check girl stashed away her carry-on, Erica touched up her lip gloss, raked her reddish brown hair around her shoulders, and adjusted the belt to her pencil skirt. After dropping a few bucks in the girl’s tip jar, she headed up the inside flight of stairs to the main lounge. The music grew stronger as she reached the top landing, and her ears recognized Warren’s horn wailing before she entered the room.

Maybe he wouldn’t notice that she was late. The club was jam-packed with Friday-night patrons, old school jazz enthusiasts, college students and a handful of after work sophisticates. Erica tried to blend in unnoticed, but when she glanced over at the stage, Warren pointed his trumpet at her, firing three sharp notes in her direction. Their eyes met and her breathing slowed to a sway.

It was always beautiful watching Warren play. His almond-brown skin glistened with sweat under the spotlight, and his shoulders hunched around his ears, keeping time with the rhythm. She loved his lips—thick like braids of licorice—and when he pursed them against the mouthpiece of his trumpet and mashed the brass valves, the notes flowed like he was singing high-pitched vocals.

The bassist was strumming with his eyes closed, rocking with his upright instrument and plucking the strings, while the drummer answered with soft, sexy brushing. The pianist joined in, playing staccato, but Warren topped them all with a whine that was so long and clear, it got under your skin but felt good at the same time. The quintet went on like that for a while, and then Warren raised his trumpet in the air, shooting off notes back to back like firecrackers, with the others behind him, snapping, pounding and popping.

Erica clapped along with the crowd until her palms stung and he tipped his trumpet at her before taking his bow. A couple rushed Warren as he left the stage, but he barely took his eyes off Erica while he spoke to them. After the admirers drifted on, Warren strolled towards her, smiling that crooked grin that she liked to think was reserved just for her. She finger waved him over, knowing she was blushing like it was a first date.

“Took you so long,” he dipped his lips and Erica fell against him like syrup. He smelled like a mix of salt and cedar.

Warren looked concerned, but the worry eased from his brows as Erica recounted her latest tale.

“You need some cash?”

“Thanks, but I’m good.” She always declined money from Warren, but somehow he still managed to slip bills in her purse before their time together ended.

The narrow bar was packed, but they didn’t have to wait for service. Warren exchanged pleasantries with the bartender and a young trumpet player who said, “You dig, baby,” after every breath. Erica sipped on her martini carefully in an effort to balance the triangular-shaped glass in the jostling crowd. Once the young cat moved on, Warren set all of his attention on her.

“I got you something.” His voice sounded husky.

“Me, first.” She swiveled in her seat and handed him an envelope from her purse.

Warren flipped two tickets out and turned them over in his hand. Stifling a laugh, he snickered, “The bitch-ass Nets?”

“Watch your mouth, trumpet boy. They’re a gift from my author, Lacy Pope. Her book landed at number one on the
New York Times
bestsellers list.”

“Nice.” He clicked her glass. “But you must not have been too good on the job, since she got Nets tickets instead of the Knicks.”

“So then my gift is appropriate.” Warren put his drink on the bar, reached into his back pocket, but stopped abruptly.

“See, you messing with me,” she tugged, urging her gift forward, but dropped her chin when she saw it.

“A damn bumper sticker.” And worse, it read “Washington Wizard’s biggest fan.” They shared a healthy love for basketball, but Warren knew she would never root for his team, the Wizards. “Talk about stinkin’ up the place? Have they even won a game yet this season?”

“Or what?” Her mouth took on a pout. Warren used it as an invitation to kiss her, lightly at first but with each second the intensity wavered between hunger and greed. Goosebumps sprouted across her arms and she looked around to see if anyone was watching them.

“Let’s go,” he wiped her gloss from his lips, and then helped her to her feet.

His Yukon Denali was parked a half block down from the club, and the two hurried against the night’s cold before it had a chance to sneeze. Once inside the car, Warren’s hands seemed to be everywhere. Erica loosened her coat and leaned her head back so that his lips could find her tender spots. His fingers pressed against her thighs and the rush of heat made Erica’s breath quicken.

“Those are twenty dollar nylons.”

“Bill me,” he whispered, breaking the seam.