Read Love Is for Tomorrow Online

Love Is for Tomorrow 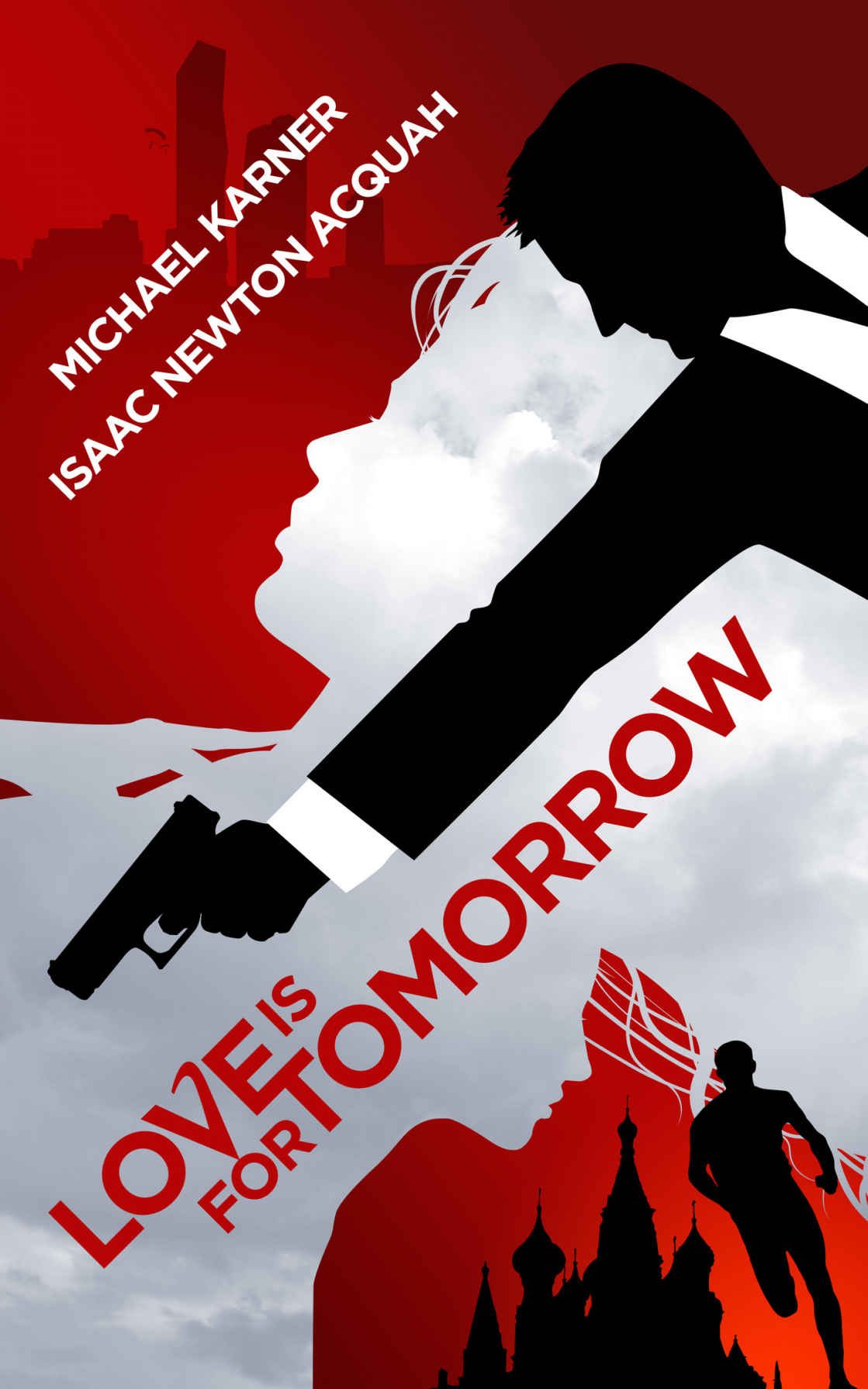 Love Is For Tomorrow

Published in 2015 by Katalyst

Michael Karner and Isaac Newton Acquah have asserted their right under the Copyright, Design and Patents Act, 1998 to be identified as the authors of this work.

Despite extensive research and insight provided by key experts, this novel is a work of fiction. Names and characters are the products of the authors’ imagination and any resemblance to actual persons, living or dead is entirely coincidental.

Don stood drenched in a place you never wanted to be; Arlington National Cemetery. It was a place of fallen heroes; heroes who took their secrets with them to the grave.
Sunlight shone down through the light rain. Willow trees formed huge umbrellas that sheltered the gathered mourners. As the chaplain’s blessing faded, Don sunk deeper into thought. Hat in hand, he walked to the grave.

Section Chief Brenneman looked pissed. Don had never seen his superior so personally involved in any other mission at Langley. He stood in the rain, his hands shoved tightly in his pockets and enduring the cold wind. Brenneman stepped forward and rested a hand on the coffin. His face relaxed for a moment.

Don knew the dead man, fresh from the farm, like the two other colleagues they’d buried earlier today. The fiction doled out by Brenneman made sure that no one would ever know what really happened that night in Paris on the
Champs-Elysees
. So much for the truth about the mission they were on.

But Don knew. He was in the car, when the shots were fired. These now decorated heroes had been pulled out of the Seine days later, bloated and pale. His stomach clenched.

The mission, Don thought, would lead to them hunting the prey. Now he wasn’t sure if they were the hunters or the hunted. He dreaded to think of what would happen next. What if the one who killed his team members wasn’t done and would come here to erase anyone connected with his case?
Were they all lined up? Apart from the section chief, who else might be targeted?

Shots nearby tearing the air startled him. The honor guard gave their salute. Birds flew up. Three shots for each of them, just like that night in Paris. The mourners dropped handfuls of earth onto the casket as it sank into the grave. A wife wept. A mother cried. A son stared in silence.

The chaplain cleared his throat.

Brenneman lowered his voice to a whisper that only Don and the priest could hear.

“Sorry Father, but I will let this murderer burn in hell”, he said. “You might say prayers of forgiveness and may God be the one who judges every man’s deeds when he meets him. But I am going to be the one that sends him there.”

Brenneman stepped closer to Don, so close that he could see the wrinkles under the chief’s silvery hair.

“Did we get anything new on the bullets? Fingerprints? DNA? Camera footage? Give me something. Was it Dwayne?”

Don let out a sigh. This was the reason he had hoped not to be here. Three weeks on and not a step closer
.
For all he knew Dwayne Carter was long dead,
buried somewhere in the Mexican desert.
Yet, his boss was relentlessly
obsessed with
the idea that these killings were connected to him.

“Whoever did this is working against us,” Don said. “He is… thoughtful in his approach. But it seems like we’re missing something. We need to slow down.”
Our men aren’t even buried but we’re already planning to follow them.
“Give it time... After all, revenge is a dish best served cold.”

“As cold as their bodies?” Brenneman said. He gestured toward the graves with a weak smile that turned into a frown. “Look, this isn’t about revenge. It’s about survival. We kill him or he kills us. It’s that simple.”

The bitterness of Brenneman’s words made Don pause. Someone wanted them dead and Don had no idea why.

His coffee nearly sloshed over the CIA issued dossier in his lap. He clung to the grip above the open window as his hat slid across the dashboard.

“Slow down a little, would you,” he said to the driver.

Don opened the dossier with his thumb, leafing once again through the pictures.

According to the observational notes, the target’s eating habits and whereabouts were easy to predict. They drove around the block several times, looking for possible parking spots.

“There’s that clown,” Don said, pointing a finger. Nigel Sheppard, a reporter who was working for
The Guardian
on Mexico Cartel stories a few years back. No guardian would save him today.

Nigel walked in his Burberry check khakis with slick hair. Sandwich in hand, he waited at the red lights like a good law-abiding citizen.

Don shook his head. “What a hipster. Can’t believe he held out against the Cartels for so long.” He nodded toward the side of the street. “Pull over here right next to him but don’t get too close. We don’t want to scare him away.”

Don took his hat from the dashboard and got out of the car. He walked over to the red light. From the corner of his eye, he saw the driver getting out and heard the familiar sounds of boots pounding onto concrete from the back of the van.

The reporter turned his head.

From the look on his face, Nigel realized he shouldn’t have confirmed his identity. The two other agents were already behind him.

Don nodded to them, before a smile spread across his lips. Nigel’s escape routes were cut off. He must have known that this day was coming but fear kept him from running.

Don strolled over to him, arms crossed.

“
And ye shall know the truth and the truth shall make you free
,” Don murmured.

The reporter didn’t take it.

“Alright. We can do it the easy or the hard way,” Don said. “But you’re coming with us.”

Nigel swallowed, then built himself up in front of Don so that he reached his height. He got so close that only his dirty glasses separated eye from eye.

Don fixed the brim of his hat. He wanted to make sure that Nigel could see the expression in his eyes.

“Not today. Understand Nigel, you and I are just two men looking for the truth.”

The reporter baulked. He flinched and tried to run. The other agents grabbed him underneath the armpits and pushed down his shoulders with the weight of their bodies. Nigel convulsed, his back giving in.

Don bent down to him.

“Choosing the hard way, then? I hoped you would.”

They drove him to the north-west of London. Don kept the reporter in the dark about where they were going. It wasn’t to make him believe he was being kidnapped, but to shock him once he saw their destination.

The van came to a stop in a parking lot. The other agents pulled the reporter out the back door. Don led them into a side alley and down a flight of stairs next to a building.

The entrance was a metal door. Don pressed a buzzer under a cipher lock. He didn’t have the need or the memory to know the code.

The door automatically clunked open into a corridor. Yellow fluorescent tubes flickered overhead. The fractured stone floor smelled of old age, mold and concrete. Their steps pounded over the concrete, echoing in the emptiness of prison cells left and right.

Don turned to Nigel, whose face had grown paler and paler since their arrival.

“Our London colleagues were kind enough to let us use their premises for holding scum like you.”

“Scum?” the reporter said. “I didn’t do anything wrong.”

“Wrong? Tell that to the judge.”

They turned right and entered a room with a soundproof door
.
Decrepit wallpaper peeled away from three walls. A large mirror covered the fourth. A table and stools stood in the center.

Don spoke as if every word was one too many.

“You will find out soon enough.”

He was too annoyed and exhausted to repeat himself. The bad news was, the interrogation was only about to begin.

Don offered Nigel a chair. Nigel hesitated. The other agents were happily obliged to help him sit down and cuff him for the trouble.

Don pulled out the opposite chair and sat down. He
took off his hat and placed it on the table, between them. He folded his hands, drew in a deep breath, then looked at him with steely composure.

“Listen pal,” Don said without blinking. “You were investigating the Dwayne Carter case. Three of our men have been killed as a result. So please, take your catheter, sit down and answer my questions.”

“They tried to bury us, they didn’t know we were seeds.” - Mexican proverb

The women here in Istanbul would be the death of him. Antoine was in for the kill. The target was in his grasp, literally. His hand moved to the small of her spine where skin met skin over the line of her backless evening dress. Goose bumps rose at his touch.

Deniz turned and looked deep into his soul.

“How do you know about Noir?” she asked.