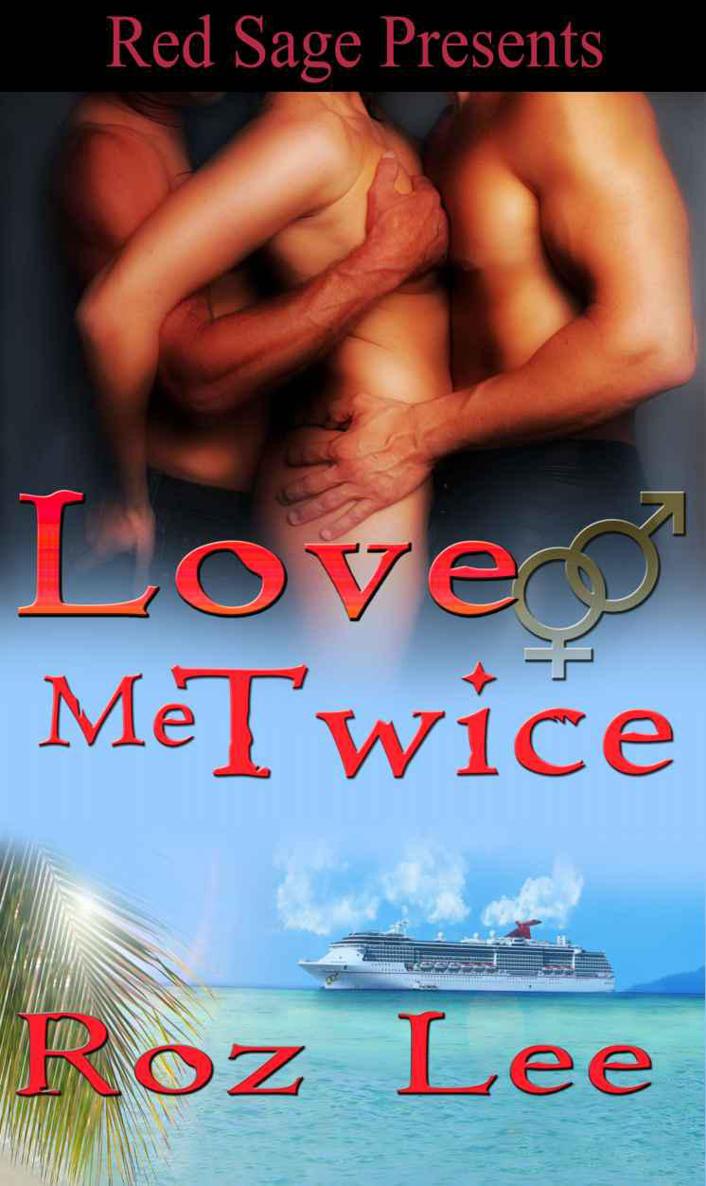 This book is a work of complete fiction. Any names, places, incidents, characters are products of the author’s imagination and creativity or used fictitiously. Any resemblance to actual events or locales or persons, living or dead, is fully coincidental.

All rights reserved, including the right to reproduce this book or any portion thereof in any form whatsoever in any country whatsoever is forbidden.

eRedSage is a registered trademark of Red Sage Publishing, Inc.

Visit us on the World Wide Web:
www.eRedSage.com

Published by arrangement with the authors and copyright holders of the individual works as follows:

ebook layout and conversion by
jimandzetta.com

I’m so glad you’ve picked up LOVE ME TWICE, the third book in the
Lothario
series. Sean Callahan has been brooding in the background since THE LUST BOAT first set sail, as I took my time deciding the best way to tell his story. So many of our American heroes work in the shadows, and Sean is one of them. That his personal life has been lived in the shadows too, only made him dearer to me. I knew he needed a happily ever after more than any character I’ve ever dreamed up, so I set out to give him one! Little did I know, Sean’s happiness would depend on two others from his past. When I realized this, I was determined to give them a happily ever after as well.

Many thanks to my husband of over three decades and my wonderful daughters who put up with my imaginary friends, and believe in my ability to tell a good story, even when I don’t. A special thanks to Kevin who helped me with the military knowledge I needed to bring Sean and Drew to life in my mind, and to Karen, my number one fan, for her unwavering support and cheerleading.

I hope you enjoy your voyage aboard the
Lothario
. Come sail with me again soon!

What’s a woman to do when she’s in love with two extraordinary men and they want her to choose between them? Run. That’s what Celeste did. Stuck on the
Lothario
with Sean and Drew, Celeste realizes postponing the decision five years hasn’t helped one bit, and they aren’t helping any either. They’re both doing everything they can to convince her to choose them.

Celeste froze. Sean’s words, spoken in a whisper as coarse as the desert sand, sent a shiver of arousal along her spine and a chill of certainty to her heart. Ever since the three of them had been captured in a border region no sane American would travel, she’d known the hourglass of their lives was swiftly emptying, and no one was going to turn it over, not this time. They’d made a fatal error somewhere along the way, and no matter how badly the DIA wanted the information they’d collected, no one was coming to rescue them.

When she’d thrown herself, naked into Sean’s arms, she’d known their captors would be watching, but she hadn’t cared. Let them look. Let them see what real love was. All that mattered was being with Sean one more time, feeling him inside her, knowing that no matter whether there was an afterlife or not, the love she had with Sean would live on. She’d needed to celebrate life and love, for whatever time they had left. Sean had known, had fallen into the chair and taken her with him. He entered her with one strong thrust.

She looked into the eyes of her team leader and her lover. They’d faced grim circumstances before and she’d never seen that look, both compassion and goodbye. Love for Sean thawed the chill that went bone deep, despite the oppressive desert heat. He knew. She’d thought she’d hid it well, the love she had for Drew, but Sean knew, and offered her this final gift, to have both the men she loved before it was too late. Infidel spies could not be allowed to live.

Celeste searched Sean’s face for regret and found only sincerity and love. It was a final gift to her, and to Drew. She saw it in his eyes, knew it in her heart. She closed her eyes, took a deep breath, and rocked her hips against his pelvis in acceptance. His cock surged inside her tight sheath. She nodded her head and let her hands fall limp at her sides as she let her mind slide another notch closer to the oblivion she sought. Sean would keep her safe. She could relinquish control to him. He knew what she needed, and she trusted him to provide it. She always had.

She rested her forehead on Sean’s shoulder, the solid muscle evident beneath his rough cotton camo shirt. His familiar scent reassured, comforted. His hands slid from their resting place on her hips, down and around, to cup her butt cheeks. She willed her body to relax as he spread her in invitation.

No words were spoken between them. Celeste’s heartbeat pounded in her ears. The rasp of a zipper pierced the roar of blood racing through her veins. Then Drew’s hand closed over her shoulder and his breath brushed against her ear. “Celeste?”

She searched for words, found none. Instead, she bit her lower lip and nodded.

Drew found her hole with his fingers and guided his cock to the spot. Celeste held her breath as he pressed against her.

“Relax sweetheart, let him in,” Sean crooned against her ear. The command in his voice eased her all the way under. His hands squeezed her ass in a reassuring manner as Drew breached the outer ring of muscles. She took a shuddering breath, and he slid deeper.

Drew’s hands stroked her back as he filled her, one slow inch at a time, until his hips cradled her. Sean’s hands slid away, relinquishing that part of her to Drew.

Drew. She’d loved him almost as long as she’d loved Sean, but they’d never been lovers, something she regretted now that time had run out. The three of them had been a team for years now. Where Sean was assertive and domineering, Drew was gentle and followed orders without question. Sean planned. Drew executed those plans. They each held a part of her heart, and somehow, Sean had known.

Sean’s hands closed over her breasts, his fingers tweaked her nipples to hard peaks. Sensation overwhelmed her. It was impossible to think about the outside world, to contemplate their future, or lack thereof. Her every thought focused on the two cocks inside her, filling her with their love. And that’s what it was. She was sure of it. Both of these men loved her.

They moved, setting a slow rhythm, stroking her, filling her. Sean’s hands were rough, demanding. Drew’s were gentle, coaxing her to relax and accept all her lovers offered. She lifted her head and let her eyes meet Sean’s. He smiled at her. The love in his gaze emboldened her. She turned her head and leaned to one side. Tense lines creased Drew’s brow, but his lips curved into a tender smile.

Drew took her chin between his thumb and forefinger and lifted her face to his. She thought to turn away, but he held her firm for his kiss. His lips were dry as the desert air, but he kissed her like she was an oasis, and he was dying of thirst. Something jumped against her hand and she realized with a start that it was Sean’s heart beneath her palm. What must he think, watching Drew kiss her, feeling Drew’s cock filling her in tandem with his own?

She broke the kiss and stroked Drew’s jaw with trembling fingers. With her eyes and her touch, she let him see her love for him, a love unspoken and doomed to remain so. He deserved to hear the words from her, especially now, but they lodged in her throat. No matter how much she loved Drew, she could never say it. She could never do that to Sean.

Sean reached for her chin, turned her to him, and took her lips in a rough kiss. His generosity only went so far. He reclaimed his woman. His hands found her breasts, and then his mouth took over. His tongue teased. His teeth nipped, and then his tongue swooped in to soothe. With one hand on her hip, and the other framing her breast, he held her where he wanted her.

Celeste wrapped her arms around Sean’s head and clung to him while his mouth lavished attention on her breasts. Drew’s hands made gentle sweeps over her shoulders and down the plane of her back. She sucked in a breath as he grew bolder. One hand snaked around her waist and splayed over her stomach, the other claimed her free breast. His fingers explored her nipple, sending shockwaves of awareness to her abdomen.

She couldn’t think. Her world came down to feelings—the oppressive heat in the bombed out hotel where they were being held—the gritty chafe of stiff clothes against her skin—the  fullness between her legs—hands, lips, breath against her skin. To love.

With two cocks buried deep inside her, Celeste clung to the here and now, clung to the affirmation of life in these, their last moments on earth. She had no doubt the desert rats who held them captive would dispose of them in the most heinous way possible as soon as they were through with them. If she could only have one memory to take to her grave, she wanted it to be this, the feel of her lovers' cocks bringing her as close to heaven on earth as she’d ever get.

His Surrogate For Hire: A BWWM Pregnancy Romance by BWWM Club, Esther Banks
The Poison Diaries by Wood, Maryrose, The Duchess Of Northumberland
Birdsong by Sebastian Faulks
Cereal Box Mystery by Charles Tang, Charles Tang
As It Is in Heaven by Niall Williams
The Monkey's Raincoat by Robert Crais
Rebel: A MMA Sports Romance by Ashley Blake
Ship of Dreams by Hiatt, Brenda
The Forest of Hands and Teeth by Carrie Ryan
Teacup Novellas 01 - Tea With Emma by Moody, Diane
Our partner