Love on a Spring Morning 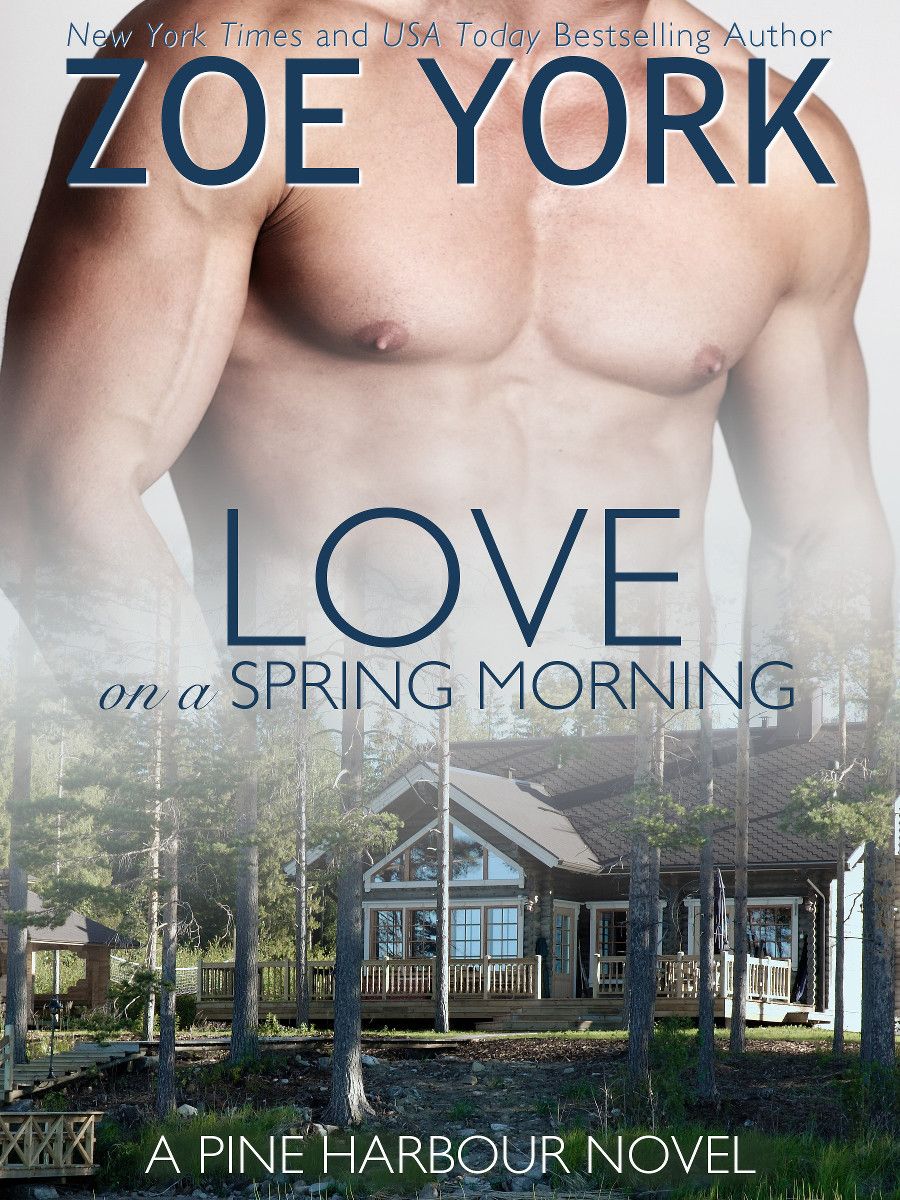 Love on a Summer Night

Excerpt from Love In a Small Town

Love in a Small Town

Love in a Snow Storm

Love on a Spring Morning

Between Then and Now

What Once Was Perfect

Where Their Hearts Collide

When They Weren’t Looking

Beyond Love and Hate

Perfect No Matter What

Beneath These Bright Stars

Tucked into a hollow half-way up the Bruce Peninsula, on the eastern shores of Lake Huron,
Pine Harbour
is where cottage country meets northern living. For generations, the Foster family has been a rock in the community. All the Foster men serve in the local Army reserve unit and the youngest adult generation is no exception.

Meet the Foster boys:
Dean
,
Jake
,
Matt
and
Sean
. A cop, a contractor, a paramedic and an adventure racer. All soldiers. None of them looking for love, but it’s coming!

Their best friends are the Minellis:
Zander
,
Rafe
,
Tom
and
Dani
. A full-time soldier, a cop, a park ranger and a paramedic. Dani’s the only girl in the entire bunch and she’s not sure how she feels about that. When Rafe got married, she was thrilled to have a sister–and even though he and Olivia have split up, Dani’s not giving up that bond. (And neither is Rafe, for that matter).

The Books of Pine Harbour

Love in a Small Town

Six years. Two break-ups. One divorce. They should be over each other…

Love in a Snow Storm

Never fall in love with your best friend’s little sister…

Love on a Spring Morning*

Duplicity. Desire. Denial. They were doomed from the start.

Love on a Summer Night

* Ryan Howard’s brother, Finn, lives in a town a few hours south of Pine Harbour. If you like this series, you’ll probably love
Wardham
, too! Finn’s book is #4 in that series, Beyond Love and Hate.

Duplicity. Desire. Denial. They were doomed from the start.

Ryan Howard has zero interest in the movie being filmed in Pine Harbour or the high maintenance stars staying in the cottages at the end of his lane. He's just barely holding on to the raw remains of his life and the fantasy world being concocted around him is, as far as he's concerned, a complete waste of time and energy. The one bright light in his life is an intern on the set, Holly Cresinski, and their quiet conversations at the end of the day on his back porch.

Holly hates her life, too, which is entirely unfair because she’s blessed beyond measure. She’s at the top of her career--as film actress, Hope Creswell--and surrounded by people that mean well. But Ryan makes her laugh, and cry, and before she can find the words to explain her deception, he kisses her.

the best family is the one you choose

For Rachel, Natalie, Andraena and Hannah, my first and most constant cheerleaders

S
CHOOL field trips were invented by the devil.

Ryan Howard scoured the Scenic Caves gift shop for pain killers. Or a heavy mallet. Anything to make the piercing headache go away. He came up empty.

“Dad!” Gavin yanked on his arm, and Ryan pasted on a smile.

“There’s this really cool dinosaur. You gotta come see it. Can I get it? Please?”

“Is it under the ten dollar limit?” Ryan followed his seven-year-old son to the display, knowing already that it wasn’t. And Gavin had already had his eye on the same clay mould kit that his friend Ben had grabbed. He was going to ask for both, and that was Ryan’s fault, because he’d been giving all three of his kids everything they asked for and more for four months.

The sharp stabbing pain behind Ryan’s eye reminded him he didn’t want to think about that right now.

Maybe it was time to call the counsellor again.

“So what do you think? Could we get it?” Gavin waved the giant box in the air.

“Your teacher asked that everyone stick to a ten dollar limit. Right? So how much is that?”

Ryan watched as his son traced his fingers over the dollar sign and numbers.

“Three dollars?” Gavin stretched out the words hopefully, then sighed in resignation and put the box back on the shelf. “Thirty dollars. More than ten.”

“Yeah. Sorry, bud. Thanks for understanding, though.” He ruffled Gav’s hair. “Put it on your Christmas wish list.”

“It’s March. Christmas is a million years away.”

“Same deal.” Gavin stomped away, and Ryan had to bite his tongue to keep from saying something else.
He’s allowed reactions
. And by the time the seven-year-old reached his friends on the other side of the gift shop, he was happy to look at the clay mould kits again, the momentary disappointment forgotten.

The bus ride back to Pine Harbour was loud and noisy—a chaotic end to a chaotic day. At least they were almost home. He got a text message from his friend Olivia Minelli that she’d picked Maya up from preschool, no problem, and they were waiting together for Ryan’s oldest, Jack, to get off the bus at home.

Suddenly becoming a single dad meant he was having to learn to rely on others. His friends were trying to make it easy. For the first few months after Lynn’s death, he’d had his in-laws just down the road, but they’d recently headed south to escape the end of winter—and to free up their home so it could be rented by a film production company.

Hollywood was coming to Pine Harbour.

Well, one movie, with a big deal director and A-list actors and everything.

The stabbing pain returned, and with it that irrational fear of exposure that had itched at the back of his neck since November.

“What should we have for dinner?” he asked Gavin as they walked across the school parking lot to where Ryan’s pick up truck was parked.

But when they got home, Maya melted down when he only had the wrong kind of pasta in the cupboard, and Jack stomped off in search of the tablet—aka the glowing God. Ryan had a love-hate relationship with the damn thing. He knew his nine-year-old hid behind it, but it also helped him read and learn and, frankly, sometimes hiding was how the kid coped.

Ryan sometimes wished he had a device to hide for coping, too. That was something the counsellor had said after Lynn was shot—they had all been through something traumatic, and it was okay to escape from the pain. But other than re-reading
Hitchhiker’s Guide to the Galaxy
, Ryan didn’t really have anything. He wasn’t a technology guy, and he didn’t have the attention span for new books right now.

He couldn’t even get a decent dinner together.

Fuck it all
. “Peanut butter and jam sandwiches?” They all quieted down and climbed up to the table. He exhaled roughly and grabbed the jam. “Tomorrow we’re eating a real meal, no complaints, got it?”

“Sandwiches are healthy,” Gavin said. “Peanuts are a meat alternative, jam is fruit—”

Ryan laughed. “Jam is not fruit.”

“Then what’s the red stuff?”

“Maybe we should make our own jam,” his middle child retorted again. Right, because what they needed to add to the mess of their life was a canning production line.

“Maybe,” Ryan said as he slathered peanut butter on bread.

“Is that a maybe that really means no?” Jack asked.

His oldest rolled his eyes. “Then you should just say no.”

“If I say no, someone will cry.” Ryan sighed and put down the knife he’d been using. “Look, guys, I’m just trying to get you fed, okay? I’m not trying to be a bad guy about making jam. Got it?”

“Got it,” three little voices said in chorus, although Jack’s voice wasn’t so little anymore.

Had his voice started to change in the fall, Lynn? Did you get to hear that?
Ryan shoved away from the counter and went to the fridge to get the milk and refocus. He needed to stop talking to his dead wife in his head. It took him to an ugly place.

His pulse thudded in his neck, like his veins were full of hot mud. Hot,
angry
mud.
Damn it all to hell
.

He wasn’t going to yell at the kids. He didn’t, most of the time, but it was in his nature to bark when he was upset, and it had been four long months of being upset.

Shaking his head, as if it was that easy to get rid of his demons, he pulled three cups out of the cupboard. “Milk to drink. No complaints, no whining, or I’ll cancel Christmas.”

“Yay, milk!” Maya cheered, and Gavin snickered, then echoed her, which made Jack laugh.

And watching his kids laugh, even if it was at his own expense…that made Ryan laugh. “Love you guys.”

“Love you too, Daddy,” Maya said, waving her hands in the air as he set her sandwich in front of her.

As they dug in, he stretched his arms over his head, trying to find the right angle to get rid of the tightness in his back. His new normal: wound tight and on the edge of being pissed off, constantly.

Ryan wanted a lot of things—happy kids, drama-free days, everyone sleeping through the night. But right along with all of that other stuff, he also wanted a fucking break, more than a few hours. His stomach turned at his selfishness. And it was impossible—it wasn’t like he trusted anyone else to take his kids overnight.

He had to make do with the tiny bits of freedom he got each week for the few hours of work he did.

“What are you having for dinner, Daddy?” Gavin tapped his leg, and Ryan realized he was still standing beside the table.

“I’ll have a sandwich, too.” What he really wanted was a steak. With mashed potatoes and green beans drenched in butter. Three foods his kids would never touch in a million years.

So he made himself a PB&J, and ignored the twinge in his back.

Bath time was uneventful, but as it often did, the sadness snuck up again as they all cuddled in his bed for story time.

Maya crawled onto his chest, burying her face in his neck, and from the foot of the bed, where he’d been reading a chapter book on a tablet, Jack turned. He kept his face ducked, not making eye contact with Ryan, but he scrambled for the empty arm space and hugged on.

They lay like that until Maya’s breathing grew steady and Gavin rolled to the side.