Love You More: A Novel 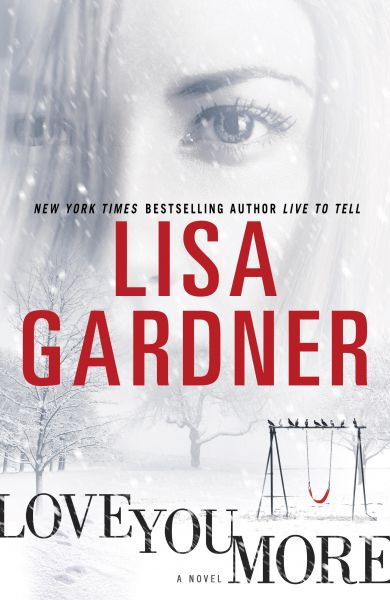 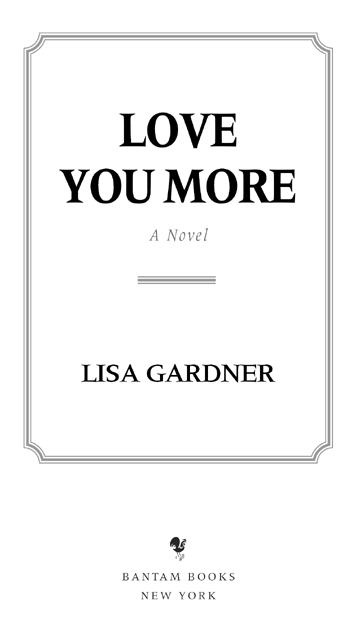 Love You More
is a work of fiction. Names, characters, places, and incidents either are the product of the author’s imagination or are used fictitiously. Any resemblance to actual persons, living or dead, events, or locales is entirely coincidental.

BANTAM BOOKS and the rooster colophon are registered trademarks of Random House, Inc.

It’s a question anyone should be able to answer. A question that defines a life, creates a future, guides most minutes of one’s days. Simple, elegant, encompassing
.

He asked the question, and I felt the answer in the weight of my duty belt, the constrictive confines of my armored vest, the tight brim of my trooper’s hat, pulled low over my brow. I reached down slowly, my fingers just brushing the top of my Sig Sauer, holstered at my hip
.

“Who do you love?” he cried again, louder now, more insistent
.

My fingers bypassed my state-issued weapon, finding the black leather keeper that held my duty belt to my waist. The Velcro rasped loudly as I unfastened the first band, then the second, third, fourth. I worked the metal buckle, then my twenty pound duty belt, complete with my sidearm, Taser, and collapsible steel baton released from my waist and dangled in the space between us
.

“Don’t do this,” I whispered, one last shot at reason
.

He merely smiled. “Too little, too late.”

“Where’s Sophie? What did you do?”

In response, I widened my stance, squaring off in the middle of the kitchen, duty belt still suspended from my left hand. Four years of my life, patrolling the highways of Massachusetts, swearing to defend and protect. I had training and experience on my side
.

I could go for my gun. Commit to the act, grab the Sig Sauer, and start shooting
.

Sig Sauer was holstered at an awkward angle that would cost me precious seconds. He was watching, waiting for any sudden movement. Failure would be firmly and terribly punished
.

He was right. That’s what it came down to in the end. Who did you love and how much would you risk for them?

I thought of my six-year-old daughter, the scent of her hair, the feel of her skinny arms wrapped tight around my neck, the sound of her voice as I tucked her in bed each night. “Love you, Mommy,” she always whispered
.

I looked my husband in the eye. A single heartbeat of time
.

I made my decision. I set down my trooper’s belt on the kitchen table
.

And he grabbed my Sig Sauer and opened fire
.

S
ergeant Detective D. D. Warren prided herself on her excellent investigative skills. Having served over a dozen years with the Boston PD, she believed working a homicide scene wasn’t simply a matter of walking the walk or talking the talk, but rather of total sensory immersion. She felt the smooth hole bored into Sheetrock by a hot spiraling twenty-two. She listened for the sound of neighbors gossiping on the other side of thin walls because if she could hear them, then they’d definitely heard the big bad that had just happened here.

D.D. always noted how a body had fallen, whether it was forward or backward or slightly to one side. She tasted the air for the acrid flavor of gunpowder, which could linger for a good twenty to thirty minutes after the final shot. And, on more than one occasion, she had estimated time of death based on the scent of blood—which, like fresh meat, started out relatively mild but took on heavier, earthier tones with each passing hour.

Today, however, she wasn’t going to do any of those things. Today, she was spending a lazy Sunday morning dressed in gray sweats and
Alex’s oversized red flannel shirt. She was camped at his kitchen table, clutching a thick clay coffee mug while counting slowly to twenty.

She’d hit thirteen. Alex had finally made it to the front door. Now he paused to wind a deep blue scarf around his neck.

She counted to fifteen.

He finished with the scarf. Moved on to a black wool hat and lined leather gloves. The temperature outside had just crept above twenty. Eight inches of snow on the ground and six more forecasted to arrive by end of the week. March didn’t mean spring in New England.

Alex taught crime-scene analysis, among other things, at the Police Academy. Today was a full slate of classes. Tomorrow, they both had the day off, which didn’t happen much and warranted some kind of fun activity yet to be determined. Maybe ice skating in the Boston Commons. Or a trip to the Isabelle Stewart Gardner Museum. Or a lazy day where they snuggled on the sofa and watched old movies with a big bowl of buttered popcorn.

D.D.’s hands spasmed on the coffee mug. Okay, no popcorn.

Alex finished with his gloves, picked up his battered black leather tote, and crossed to her.

He kissed her on the forehead. D.D. closed her eyes, mentally recited the number twenty, then started counting back down to zero.

“I’ll write you love letters all day, with little hearts over the ‘i’s,” she said.

“In your high school binder?”

Alex stepped back. D.D. hit fourteen. Her mug trembled, but Alex didn’t seem to notice. She took a deep breath and soldiered on.
Thirteen, twelve, eleven …

She and Alex had been dating a little over six months. At that point where she had a whole drawer to call her own in his tiny ranch, and he had a sliver of closet space in her North End condo. When he was teaching, it was easier for them to be here. When she was working, it was easier to be in Boston. They didn’t have a set schedule. That
would imply planning and further solidify a relationship they were both careful to not overly define.

They enjoyed each other’s company. Alex respected her crazy schedule as a homicide detective. She respected his culinary skills as a third-generation Italian. From what she could tell, they looked forward to the nights when they could get together, but survived the nights when they didn’t. They were two independent-minded adults. She’d just hit forty, Alex had crossed that line a few years back. Hardly blushing teens whose every waking moment was consumed with thoughts of each other. Alex had been married before. D.D. simply knew better.

She lived to work, which other people found unhealthy, but what the hell. It had gotten her this far.

Alex opened the front door, squaring his shoulders against the bitter morning. A blast of chilled air shot across the small foyer, hitting D.D.’s cheeks. She shivered, clutched the mug more tightly.

“Love you,” Alex said, stepping across the threshold.

Alex closed the door. D.D. made it down the hall just in time to vomit.

T
en minutes later, she remained sprawled on the bathroom floor. The decorative tiles were from the seventies, dozens and dozens of tiny beige, brown, and harvest gold squares. Looking at them made her want to puke all over again. Counting them, however, was a pretty decent meditative exercise. She inventoried tiles while she waited for her flushed cheeks to cool and her cramped stomach to untangle.

Her cellphone rang. She eyed it on the floor, not terribly interested, given the circumstances. But then she noted the caller and decided to take pity on him.

TheVampireandtheMouse by Robin Stark
The Shamrock & the Rose by Regan Walker
Silken Rapture: Princes of the Underground, Book 2 by Beth Kery
Killer Heat by Linda Fairstein
Bite Marks by Jennifer Rardin
Blood of the Wicked by Leighton Gage
The Law of Moses by Amy Harmon
The face of chaos - Thieves World 05 by Robert Asprin, Lynn Abbey
Darkness Clashes by Susan Illene
Keegan's Bride (Mail Order Brides of Texas 2) by Kathleen Ball
Our partner