Read Love you to Death Online

Love you to Death 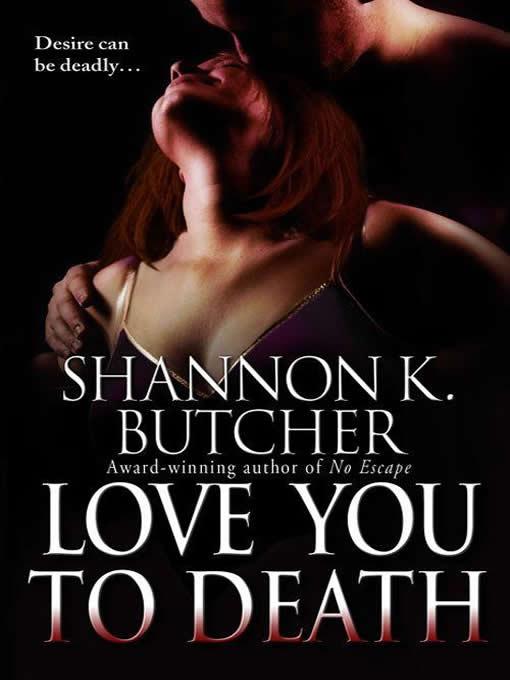 “A new star in the romantic suspense galaxy.”

“Edgy and intense… A sizzling romance… Make yourself comfortable and turn on the light—once you start reading
No Escape
, you’ll not want to put it down until the very last page.”

“A tautly written romantic thriller, chilling in premise with a thrilling secondary plot and sensual romance to entice readers from page one.”

“An exciting, suspenseful ride that goes from zero to sixty on the first page… A first-class romantic suspense that satisfies from beginning to end and one that shouldn’t be missed.”

“A nicely paced and involving romantic suspense that will keep readers flipping the pages well into the wee hours.”

“Tense, fast-paced… Believable and gut-wrenching… Butcher is in control.”

“Butcher is one to watch! Characters that tug on your heartstrings and a well-formed plot make this romantic suspense a must-read!”

“Top pick! 4½ Stars! Provides ample evidence that Butcher is on the fast track to becoming a major presence in the romantic suspense genre. Chilling plotlines and layered characters add serious punch to this thriller!”

“An absolute must-read… Romantic suspense at its very best!”

“Action, adventure, and romance with as many twists and turns as a roller-coaster ride.”

“A romantic suspense that simply burns up the pages… Readers will swoon to the hero and identify with the delicate heroine.
No Regrets
will leave readers breathless.”

“She has a unique voice with an uncanny ability to create characters that are interesting and refreshingly different. Readers will look forward to reading Ms. Butcher’s next novel.”

“A good, fast thriller… I could not stop reading it.”

“Excitement, adventure, and steamy scenes keep you turning pages to keep up with the many twists in the story…
No Regrets
is a delightful read.”

“Shannon K. Butcher has hit this one out of the park. The suspense will keep you on the edge of your seat… The tension is so thick you will jump with the creaks in your own house. And not only is the suspense tension readily apparent, so is the sexual tension.”

“5 Cups! Takes the reader by storm. This is one intense, driven read that should not be missed.”

“Fast-paced, pulling the reader along… I thoroughly enjoyed watching David and Noelle as they work through an exceptional situation and come together.”

A
LSO BY
S
HANNON
K. B
UTCHER

This book is dedicated to all the loving sisters out there, but most especially to mine.

I’d like to thank Robert Schneider for his invaluable insight into the mind of a serial killer. You saved me hours of difficult and creepy research, and I’m sorry if I messed anything up in the process of breathing life into the profile.

My thanks also go out to my faithful critique group: Sara Attebury, Dyann Barr, Julie Fedynich, Sherry Foley, Liz Lafferty, and Claire Ashgrove. I can’t tell you how much I appreciate your putting up with my never-ending requests for feedback.

B
reaking into a house was a lot harder than it looked on TV.

Elise McBride held the small flashlight in her mouth, smoothed the warped edge of her credit card with her fingers, and tried to shove it between the door and the jamb again, with no luck. All she managed to do was take off another layer of plastic and shred the magnetic strip.

Fantastic. Getting a replacement card while she was traveling wasn’t going to be any fun.

Defeated, Elise dropped her head against the cool wood of her sister’s front door and tried not to cry in frustration. After days with no contact from her gabby sister, Elise was sure Ashley was in trouble. The deep kind.

Her gut churned with worry, warning her that something was wrong. Ashley had a tendency to disappear, wandering off on bizarre, artistic tangents with whatever hot guy was at hand, but never for this long, and never without returning a phone call.

Elise had left dozens of messages on her sister’s phone over the past few days, and not one of them had been answered.

The police had promised her they’d check Ashley’s home, but what if they’d forgotten, or lied to Elise just to get her to stop bugging them? What if she was inside, hurt or unconscious and unable to reach a phone? What if she was lying in a hospital somewhere with amnesia, unable to call for help because she couldn’t remember who she was? What if she’d driven her car into a ditch, gotten trapped, and no one had found her yet?

Stop it. Get a grip.
All that doom-and-gloom stuff sounded like Mom talking. If Elise had listened to her, she’d believe that everyone died in a ditch wearing dirty underwear after being attacked by boys who wanted only one thing.

Ashley was fine. She had to be. Elise just needed to figure out where she’d gone this time, and the key to that mystery was likely inside her sister’s tiny house.

Elise briefly thought about breaking a window, but it was around three in the morning. Haven, Illinois, was as still and quiet as the cool morning air, and she was afraid one of the nearby neighbors would call the police if they heard breaking glass. She wasn’t about to get hauled to jail for breaking and entering while her sister was in trouble.

Maybe Ashley had stashed a key somewhere. Heaven knew she was always forgetting or losing things. Including keys. After years of being coddled by family, Ashley was on her own now, developing coping mechanisms to combat all her flighty, brainless habits—like misplacing keys. At least that’s what she said. She’d told Elise many times how she was fine living on her own and didn’t need a keeper, no matter how much Elise worried.

Ashley was way too trusting with men, way too easily swayed by a sweet smile and a confident wink. One of these days, it was going to get her in trouble.

The Coxon Fund by Henry James
Hunger by Elise Blackwell
House Party by Patrick Dennis
King's Justice: The Knights of Breton Court, Volume 2 by Maurice Broaddus
The Sixth Estate (The Craig Crime Series) by Catriona King
The List by J.A. Konrath
For Love of a Cowboy by Yvonne Lindsay - For Love of a Cowboy
Fighting Fate by Scarlett Finn
The Lullaby of Polish Girls by Dagmara Dominczyk
Xtraordinary by Ruby Laska
Our partner