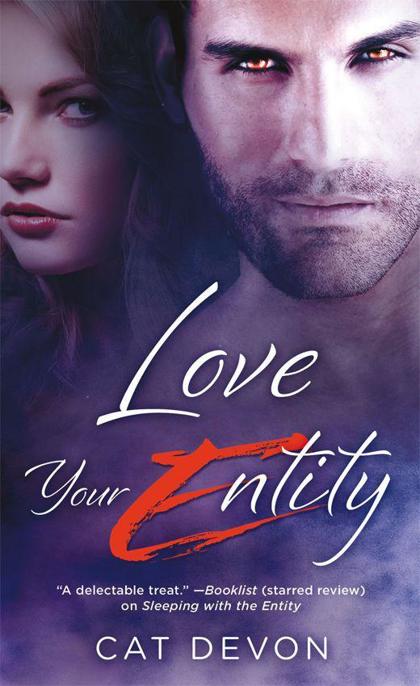 This book is dedicated to my big brother, Ken.

You are my rock. You don’t need a “Jedi mind meld” to know I love you from here to a galaxy far, far away. Yes, I know that is a
Star Trek
/
Star Wars
mashup.

I did it just for you.

When Sierra Brennan opened the door to her new house in Chicago, she didn’t expect to find a naked man standing inside. A very hot, sexy, well-built, and well-hung man who looked like he was hungover. He made no attempt to cover up while she made every effort to keep her eyes on his face and not his privates.

“Thank God you’re here,” a woman wearing a corset and little else said from right beside Sexy Naked Guy. Sexy Naked Trespassing Guy. “What took you so long?”

“What do you mean what took me so long?” Sierra said.

“Who are you talking to?” Sexy Naked Guy asked. His voice was low and rough.

“I don’t have a girlfriend,” he said.

“Look, I don’t care what your relationship is with her, but you are both trespassing so you need to leave right now. As soon as you get dressed, I mean.”

“Clearly that’s not true as I am here as well.” She punched 911 into her smartphone.

He moved closer and looked deep into her eyes. He had chocolate-brown eyes and thick lashes. His chiseled cheekbones made his face as sexy as the rest of his chiseled body. “You don’t want to do that.”

“You really don’t want to do that,” the corseted woman said.

Sierra already knew what she didn’t want. She didn’t want to screw up her chance to inherit this house. Several others had tried and failed to fulfill the thirty-consecutive-days residency requirement. She’d only met her great-uncle Saul Brennan once yet he’d listed her in his will. Yeah, he’d listed two older cousins before her, but here she was anyway. They hadn’t stayed in the house. She would. Because she had a huge advantage.

Sierra saw things most people didn’t. Yes, maybe it was a cliché, but she saw dead people. Ghosts. Spirits who for one reason or another didn’t or couldn’t move on to the other side.

Which was why she was able to write such good paranormal novels.
Write what you know
. That’s what all the pros said and it was what Sierra did. Her S. J. Brennan books featured a vigilante ghost hunter and the challenges she faced in finding justice and punishment where needed.

Yep, she saw ghosts and she was seeing them now as the corseted woman moved closer and shimmered with translucency. She had short dark hair styled à la the
Great Gatsby
era, wide brown eyes, and a curvy figure. But she was definitely a ghost. Which meant Sexy Naked Guy was a ghost too, right? She put out her hand to check. Her fingertips rested on his bare chest. His
solid
, muscular bare chest.

“Why aren’t you leaving?” he growled.

She yanked her hand away as if burned. “Because this is my house and you are the squatter.”

“Sierra Brennan, the owner of this property.”

“Forget him. I need your help,” the ghost said. “My name is Ruby, in case you were wondering.”

“One thing at a time,” Sierra told Ruby. “Get dressed,” she told Sexy Naked Guy. Wait, his name was Ronan.

He looked deep into her eyes once more. “Get out.”

Sierra shook her head. “No way.”

She saw the confusion there before irritation took over. “Leave!” he bellowed.

“You leave,” she bellowed back at him. She’d driven her rental U-Haul van nine hours across three states and she was beyond exhausted.

“How long has he been here?” Sierra asked Ruby.

“Who are you talking to?” he demanded.

“He’s been here a few days,” Ruby said. “I’ve been here for decades and decades.”

Sierra frowned. If Ronan was a recent arrival, then he couldn’t be the reason Ruby hadn’t crossed over. He obviously couldn’t see Ruby. She should have realized that Ruby was a ghost faster than she had, but Sierra chalked that up to the fact that she was so tired. Usually she could tell a ghost from a human, but nothing about this Saturday had been usual.

She’d done a book signing at nine this morning in Ohio. There had been a good turnout, but a majority of the audience had wanted her to pass on a message to their departed loved ones. Sierra had to tell them that she wasn’t a clairvoyant, she was a writer.

Yes, her books revolved around ghosts, but that didn’t mean they were real. That was her story and she always stuck to it. The rest was between her and the ghosts she helped to the other side. She wasn’t about to reveal her ghost-whisperer side to the general public. She knew all too well the stigma that carried, the mocking laughter when she’d told friends as a child that she saw ghosts. She’d been labeled weird and was ostracized. Ever since then, she’d been careful not to reveal her hidden talent.

Sierra would deal with Ruby the Ghost later. First she needed to get rid of Naked Ronan. “Look, I don’t know why you think you have a right to be here,” Sierra said. “But I’m telling you that the previous occupants did not fulfill the requirements of the will.”

Ruby raised her hand and had a sheepish look on her translucent face. “That may have been my fault.”

“I had a feeling,” Sierra muttered.

Ronan frowned. “You had a feeling about what? No, don’t answer because I don’t care.”

What kind of man stood there so arrogantly while so naked? An extremely ripped one. Not in a bodybuilder-weird kind of way but in a six-pack, shoulda-been-in-the-movie-
Magic Mike
kinda way.

Sierra was finding it increasingly difficult to keep her gaze above his neck. Okay, she’d sneaked a peek down to his navel once or twice. And maybe she had mistakenly looked even lower.

Right, who was she kidding? She’d seen him in all his glory. His nudity rattled her.

Keeping her own self-preservation in mind, she had her phone in one hand while her other hand was in her purse, her fingers curled around a can of pepper spray. Because the bottom line here was that she was facing an angry naked guy and that was not a positive in the security department.

A knock at the front door startled her. She yanked it open to find a man standing there, flashing a badge of some kind at her.

“That was fast,” she said. She must have pushed the 911 button without realizing it and they’d used the GPS on her phone to locate her. “Come in.”

“I’m Damon Thornheart. Is there a problem?” he said.

“
He’s
the problem.” She turned back to Ronan to find that he’d donned a pair of jeans. That was also fast, but it didn’t change the fact that he didn’t belong in her house. “Get rid of him, please,” Sierra said. “He’s trespassing in my house and I want him gone.”

Ronan McCoy couldn’t believe this was happening to him. He’d spent the past century waiting to come home and now that he had, this woman with the bad attitude and great breasts was getting in his way.

Which was why Ronan welcomed the arrival of fellow vampire Damon Thornheart. Ronan wasn’t sure why he hadn’t been able to compel the woman to leave. Maybe it had something to do with the fact that he’d been an indentured vampire for nearly the past hundred years.

Ronan had been turned on the battlefield during World War I, in May of 1918. The trench warfare in northern France had been brutally bloody. Hundreds of thousands had been injured, Ronan among them. But his torture hadn’t ended with his death. It had only begun.

He ruthlessly shut those thoughts down. He refused to let his past dictate his future. His immortal future.

Yes, Baron Voz had sired him but, unlike most vampires, Voz had kept Ronan indentured to him for almost a century, forcing Ronan to do his bidding and his killing.

But Ronan was done with that now. When he’d left Chicago to head off to war in Europe, he’d promised his sister Adele that he’d come back. He was keeping that promise. Their mother had died in a freak boating accident on Lake Michigan in the summer of 1915. Their father, a physician, had died of a heart attack after Ronan was deployed to Europe. Ronan had received the news when he’d arrived in France. He only had his sister left, and her letters had kept him going before his death.

So here he was, home again. The returning warrior. Yeah, right.

“Damn right, I won’t,” she said. “The house is mine. I have the paperwork to prove it.” She dug in her purse. “No, wait, it’s here. I could have sworn … Yes, here it is.” She handed over the forms. “Those prove I am the owner of this property.”

“Of the house, yes, but not the property,” Damon said after looking over the paperwork.

“That you have apparent ownership of the house, but not the land it sits on or is surrounded by.”

“You mean the small front yard and backyard?” she said.

“How is that possible?” she demanded.

Damon shrugged. “You’ll have to take it up with your attorney.”

“He’s just left on a two-week cruise to Antarctica. I can’t contact him while he’s away.”

“Then you’ll have to wait until he comes back.”

“Because the clock starts ticking today.”

“Never mind. You still haven’t said why you’re here. Where is your proof that you have any right to be here?” she asked Ronan.

Her glare at his still-bare chest let him know that she wanted to add, Where is your shirt? Hmm, maybe he could read her mind and could get rid of her that way.

Ronan concentrated on Sierra, taking in everything about her, from her shoulder-length auburn hair to her green eyes to her great breasts. She had a cute nose and a stubborn chin. She grabbed her documents from Damon’s hands with slim fingers.

Ronan wondered if she’d be so confrontational if she knew she was facing a pair of vampires.

Reminding himself that he was supposed to be trying to read her mind, he refocused his attention. She was angry. She was tired. She was concentrating on the papers and then looking over his shoulder. What was she looking at?

He turned but saw nothing there. He turned back to Sierra. She was wearing a black leather jacket, black pants, a lime-green top that hugged her breasts, and a pair of gold Claddagh earrings. With her coloring, the auburn hair, pale skin, green eyes, he figured her heritage was Irish. So was his. But she was a mere human while he was not.

Ronan breathed her in. All his senses were powerfully heightened to vampire strength. Her scent was tantalizing. He could hear her pulse swishing through her body. He focused on the slight quiver of her carotid artery in her neck.