Read Loved by You Online 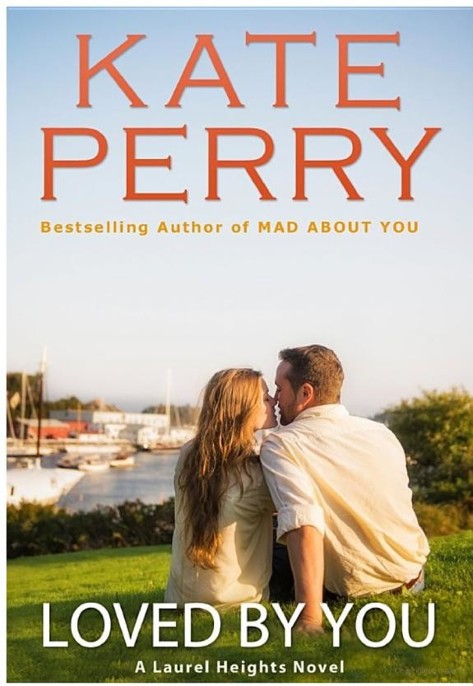 From Perfect For You (Laurel Heights #1)…

“Can’t wait for the next in this series…simply great reading. Another winner by this amazing author. “
–Romance Reviews Magazine

“A winning and entertaining combination of humor and pathos.”
–Booklist

I can’t tell you how much your awesome notes, funny comments, and general enthusiasm means to me. Writing is HARD, and some days it’s only your encouragement and knowing how much you’re looking forward to the next story that keeps me going. Thank you. LOVED BY YOU is dedicated to you. I’m drinking a toast to you and your own happily ever after!

Also, special thanks to Julia Enders, who thought Laurel Heights needed a pig. Ante Up is
way
smaller than James, but James is
not
San Francisco sized. Wink.

The moment KT stepped into her parents’ kitchen she knew she’d made a mistake.

Her sister Bijou sat at the Henry VIII table, reading a magazine. Their little mother Lara washed grapes at the sink, her back turned toward KT. A tranquil, normal scene.

And so deceptive because there was nothing normal about her family.

KT looked around, not sure whether she should enter or run away. Lately Lara had a mission: to find KT a boyfriend. She wouldn’t have been surprised if her mom had a man hidden somewhere for her.

Cup of coffee or back away quietly?

Back away.
She took a careful step back.

As if a radar went off, her mom looked over her shoulder. “Karma, sweeting, there you are.”

She winced like she always did when she heard the name her parents had saddled her with. Who named their kid
Karma
?

New Age hippy rockers like Anson and Lara. Fortunately, she could just go by KT. She’d met Chris and Gwyneth’s kid Apple at one of her parents’ parties, and she’d immediately felt sorry for the little thing. She started to wonder how life named Apple would be worse, but was distracted by the militant light in her mom’s eyes.

“Stop hovering in the doorway, Karma.” Lara motioned to a chair. “Sit next to your sister. I want to talk to you.”

Bijou glanced up from the issue of
Rolling Stone
she was flipping through and gave her a look that said
run away
.

Bijou pushed a half-full cup across the table toward her.

That was why she loved her sister—Bijou had her back. Bijou was three years younger and completely opposite in every way, but they’d always been close. KT credited her sister for that. At twenty-seven, Bijou had it together. She knew what she wanted: to be on the cover of
Rolling Stone
. And she had a plan to get it.

KT? Not so much. Especially since Jamila, the singer she’d been writing songs for, fired her last year. She told herself she had everything she needed. She lived in the carriage house at the back of her parents’ property in peace. She had her piano. She had good friends. She was happy. Sort of.

Except for when her mom was trying to pimp her out.

She’d taken the enforced break from writing pop songs to work on something she really cared about: a piano concerto. It was a departure, but she loved the challenge. She had no idea what she was going to do with it once she finished it. She certainly wasn’t going to play it herself. Performing made her puke. She could feel bile rising in her throat at the mere thought.

That’d been a bone of contention for the past year between her and her parents—and by “her parents” she meant her mom. KT did her best to avoid the main house. Usually. Until she ran out of coffee in her cottage and became desperate.

She cradled Bijou’s coffee to her chest and sidled away. “I need to get back now, so I’ll just—”

“Sit, Karma.” Her mother pointed to the chair. Then she frowned. “What on earth are you wearing?”

“I don’t know. I might prefer plastic wrap.” Her mother shook her head, clearly dismayed. “Really, Karma. You look like a lumberjack.”

She tugged at her shirt. “It’s cold today.”

Still shaking her head, Lara said, “Karma, I need to discuss something with you.”

Her sister gave her a commiserating look and pushed out the seat next to her. “Maybe you should sit down.”

Crossing her arms, she gave her sister a baleful look and then returned her attention to her mom. “Can this wait? I’m in the middle of something.”

“What could you possibly be in the middle of, Karma? You have no life.”

“Ouch,” Bijou said as she flipped a page.

KT nudged her sister with her foot. “I have a life. I
like
my life.”

Her mother crossed her arms, looking intractable. “You don’t have a life. You’re a hobbit.”

“Semantics.” Lara waved a heavily jewelled hand. “The point here is that Karma isn’t living up to her potential.”

Her mom hated that she wrote songs for other people, but KT couldn’t imagine being in the limelight. Bijou craved it. KT began to hyperventilate thinking about having to perform in front of just a handful of people.

Bijou set the magazine aside. “Mom, since you’re so busy preparing for your benefit concert in three weeks, maybe you and KT can discuss this later.”

Lara smiled. “I’m so happy you brought up the concert, love.”

KT and Bijou exchanged a look. Bijou was the one to ask, “What about the concert?”

“Your father and I have been discussing the situation.” She faced KT. “We were thinking of evicting you from the cottage.”

“What?” She blinked at her mom, stunned. The cottage was
hers
. She’d lived in it since she’d turned eighteen.

“But I knew that wouldn’t work,” her mom continued. “You’d just find another dank, dark place to hole yourself up in and then we’d never see you. And you still wouldn’t do anything with your music. So we came up with a different solution.”

“Solution? There’s no problem!” KT protested. “I’m happy where I am.”

Lara arched her brow. “Are you?”

“Yes.” Pretty much. She liked being alone. Or rather, she didn’t like people. Most people—there were a few people like Bijou and her friends Scott, Griffin, and Nicole who she did enjoy spending time with.

Her mom studied her silently, then shook her head, her long blond hair waving gently. “I don’t think you are happy, Karma. I don’t even know what you do out there in the cottage.”

“For what reason? To plaster your walls with music no one’s ever going to hear? You’re not even selling your songs anymore, Karma.”

“Yes, it is,” her mother said gently. “Jamila fired you.”

“Only because she couldn’t stand the truth.”

Bijou cleared her throat. “You told her she was singing it all wrong.”

“But maybe you didn’t have to tell her a dog could do a better job,” her sister suggested mildly.

She shrugged, crossing her arms. “I can’t help it if she can’t take constructive criticism.”

“Whatever the cause, Karma,” her mother continued, “you can’t continue living this half-life. You’re thirty. You should be over your Saturn return by now. Which is why I’m going to do this.”

Her heart froze in fear. “What are you doing?”

“We want you to be part of the concert.”

“Hell no.” She never played in front of a crowd. Ever. Occasionally, she played with her friend Griffin or Bijou, but always in the privacy of her own studio. She knew her parents eavesdropped sometimes, but they loved her no matter what, so they didn’t count.

KT began pacing, sickly sweat breaking out on her forehead as she imagined a million eyes focused on her, waiting for her to screw up. “You know I don’t perform in public.”

“It’s time for that to change. It’s time to let the old fears go, Karma.”

It may have happened twenty-six years ago, but the fears didn’t feel old at all. Just the thought of being on stage brought everything back in a rush: her mom pushing her toward the piano, the feeling of her lungs being crushed from the weight of everyone’s stare, the clumsiness of her fingers, the beginning of the tittering laughter as she stumbled on the keys. Just like she was still in that room, in front of all her parents’ friends and colleagues, she began to sweat, her voice paralyzed.

Her mother walked up to her and reached up to touch her face. “You have a gift, Karma. Forget having perfect pitch and being talented at every instrument you pick up. Your voice is heaven sent. It’s criminal how you aren’t using it. Do you know how many people would kill to have it? And no one’s ever heard it.”

She shrugged, trying to pretend that she wasn’t affected by her mom’s words. “Nothing’s going to convince me to play in the concert.”

“I was afraid you’d say that.” Lara took a deep breath and straightened her already perfect posture. “That’s why your father and I decided that if you don’t perform at our concert, neither can Bijou.”

“
What?
” KT and Bijou exclaimed together.

Lara lifted her chin. “You give me no choice, Karma. It’s you and Bijou or neither one of you. You decide.”

KT turned to her sister, who looked stricken. She knew how important this concert was to Bijou. Her sister had worked her ass off to get noticed on her own merit without cashing in on their parents’ name. Her star had been steadily rising until
The Incident
last year, as they’d been calling it.

But Bijou had bounced back and was ready to take her place in rock history, and this concert was going to launch her. Unless she was banned from being in it.

“Yeah.” Looking shell-shocked, Bijou set the magazine down and faced their mom. “I don’t understand. What did I do to rate this?”

“Nothing, love.” Lara ran a loving hand over her younger daughter’s hair, affection glowing from her expression. “This has nothing to do with you and everything to do with Karma. It’s for her own good.”

The Moons of Mirrodin by Will McDermott
Knight by RA. Gil
Built for Power by Kathleen Brooks
Desnudando a Google by Alejandro Suarez Sánchez-Ocaña
My Love Break by Antonia, Anna
Desolation by Mark Campbell
Trust Me II by Jones, D. T.
Troubling a Star by Madeleine L'engle
Chrysocolla by B. Kristin McMichael
Speechless by Yvonne Collins
Our partner