Read Lover in the Rough Online

Lover in the Rough 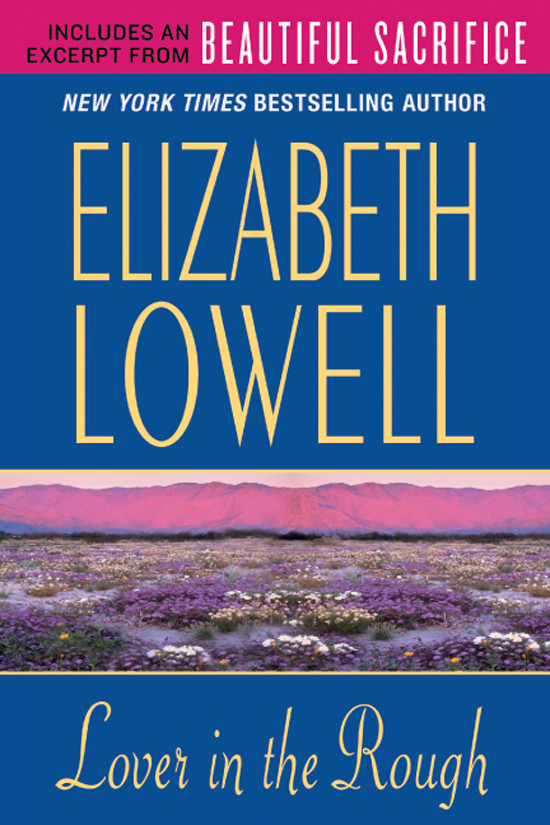 For a limited time at a special price, enjoy
New York Times
bestselling author Elizabeth Lowell's stirring romance,
Lover in the Rough
, along with the first four chapters from her upcoming new book,
Beautiful Sacrifice
, on sale May 22, 2012.

Reba Farrall was lost—until a kindly old gentleman took her under his wing and helped heal her shattered spirit. Now her dearest friend is gone, leaving her with a doubting, broken heart . . . and half-interest in a California gem mine. But Chance Walker has burst into Reba's life—a daring adventurer who believes in nothing except the priceless uncut stones for which he searches the Earth. In the blistering heat of Death Valley—in the intoxicating presence of a jewel more exquisite than any he has ever seen—Chance must confront a dire peril that stalks the sad and sensuous beauty. For only he can save Reba Farrall from harm—and only she can teach him how to love.

Lover in the Rough with Bonus Material

To my editor,
Patricia Smith,
who with intelligence, humor and tact
ensures that I don’t stray from
the primrose path.
Thanks

An Excerpt from
Beautiful Sacrifice

“M
s. Farrall,” asked the photographer, do you want the white jade dish next to the baroque pearl cluster or the ivory sculpture?”

Reba Farrall walked gracefully over the dry streambed toward the photographer. Angular gravel grated beneath her flat-heeled sandals. She stopped behind the photographer, bent and looked through the camera lens. Absently she pushed aside wisps of honey-blond hair that had escaped from the casual knot she wore on top of her head. She straightened and flipped through the papers on her clipboard, trying to look professional and competent when all she wanted to do was steal away for a few minutes and cry.

“Group eight?” asked Reba, her voice higher and harsher than its normal contralto.

“Yes,” said the photographer, consulting her own clipboard.

Reba looked back at the precious objets d’art resting on the ledge of natural marble. Pale marble walls rose on either side of the dry streambed, walls polished by water and time into flowing curves and hollows. Bands of cream and pale yellow, gold-grey and eggshell wove through the walls, giving depth and subtle texture to the satiny stone. Above the marble rose steep, deeply eroded hills of vermilion and black and chocolate, volcanic rock so new that the sun hadn’t had time yet to bake out the intense colors.

Mosaic Canyon’s contrast in textures was fascinating. Polished marble walls that would be the envy of any castle were juxtaposed against the jagged debris of past volcanic explosions. Bent, broken, canted on edge, the banded marble strata were almost shocking in their smoothness. The subtly untamed stone was an excellent foil for the tranquil, highly civilized curves of the white jade dish. The baroque pearls, however, didn’t quite fit. As for the arching, intricately carved ivory bridge . . .

“Do the dish alone on the marble. Try the baroque pearls in one of the hollows,” said Reba, pointing to one of the many holes that pocked the marble, creating natural handholds and footholds up the face of the eight-foot wall. “I think the ivory bridge will do better contrasted against the darker mixture of marble and volcanic rocks in the streambed.”

Reba watched with a patience that went no deeper than the mist of perspiration on her skin. She knew that her desire to lash out at the people around her was irrational. The photographer was excellent. The guards were as unobtrusive as men carrying guns could be. The two insurance agents had stayed out of the way. The various assistants and gofers had been more help than bother. Except for Todd Sinclair, everyone was doing exactly what was expected. And, in a way, so was Todd. He was being every bit the crass boor that he had been while his grandfather was alive.

With a silent cry Reba turned away from the sight of the beautiful objets d’art that Jeremy Bouvier Sinclair had collected during his long lifetime. A month hadn’t given her enough time to adjust to Jeremy’s death. Even at eighty he had been erect, alert, his eyes bright and quick. In his precise, elegant French, he had introduced her to a world that she would never have found alone.

The half-century gap in their ages had not prevented a mutual understanding that was as rare as the materials they worked with. Never having known a father, Reba had given Jeremy a daughter’s love. He had returned that love, taking a parental pride and pleasure in her growth from a rootless young divorcee to a sophisticated, accomplished collector of natural objets d’art. He had given generously of his immense knowledge of gem minerals, cut gems and art created from precious materials. He had taught her everything and accepted nothing in return but her delight when they found something exquisite to add to his collection.

When it had come time for Reba to make her own way in the world that he had opened to her, Jeremy had given her his blessing. His unqualified confidence in her skill, taste and honesty had gone out along the gem grapevine. In a milieu where a person’s integrity was his only bond, Jeremy’s support had been a priceless asset . . . but still not a tenth so valuable to her as his love.

And now he was dead.

“Ms. Farrall?” said the photographer in the voice of someone who has repeated a question several times. “Should we go back to the mouth of the canyon for the Green Suite? I don’t think those shades will do well against the marble. Perhaps the salt flats or the dunes?”

“Hey, sweet stuff,” called Todd before Reba could answer. “Wake up! The lawyers are gone. There’s nobody here to impress with your great grief for the old goat.”

Reba looked at Todd with golden-brown eyes that were as clear and hard as the cinnamon diamond Jeremy had given her for her thirtieth birthday. The ring glinted fiercely as she clenched her fist, then relaxed it. Today was the last day that she had to put up with Todd Sinclair, yet it wouldn’t be the last time that she would wonder how a gentleman like Jeremy could have given rise to a toad like Todd.

Ignoring him, Reba turned to the photographer. “The dunes, I think.” She looked at her watch. “Take a break, everyone. We’ll meet at the dunes in half an hour.”

She waited while people packed up equipment and began walking back toward the mouth of Mosaic Canyon. When the last person vanished around a bend in the canyon’s marble walls, she closed her eyes and fought the welling tears. She had more work to do. The terms of Jeremy’s will dictated the sale of his collection. She would do as he had asked. She would even accept the five percent commission—then she would use it to pay for publishing a full-color book containing photographs of his collection as it had been while he was alive. The book would be her memorial to him, a celebration of Jeremy Bouvier Sinclair’s taste and unerring judgment.

But first she had to get through this day as she had gotten through every other day since Jeremy died, by not giving in to the despair and emptiness inside her. She turned and put her cheek against the marble wall, enjoying its coolness. Even in April, Death Valley was a place of dry winds and barren mountains black against the cloudless cobalt sky.

She hadn’t wanted to come here. The very name had set her on edge. Yet, once here, she couldn’t help but respond to the fierce, naked land. There were no plants to mask the infinitely subtle variations of color and texture that marked the passage of geological events and eras. Minerals both common and rare were jumbled together, colors and textures juxtaposed in a haphazard way that told much about the violent geologic history of the valley. Earthquakes, molten rock flowing thickly, seas and lakes alternating with grinding drought, floods eroding mountainsides, strata of rock sinking, rising, bending, breaking; it was all here, written across the hard surface of the earth.

The land had been here so long and human life was so brief, a glitter of gold dust riding a restless wind.

Reba heard footsteps and spun around, angry that her solitude had been spoiled. Todd Sinclair was picking his way along the streambed toward her. His city shoes and sidewalk gait looked awkward in the primal land.

“What do you want?” she asked, her voice clipped and cold.

“Same thing you gave old Jeremy,” said Todd, trying to close the distance between them as quickly as he could.

Pebbles rattled beneath his feet, threatening to trip him. He swore and slowed down. Reba made a sound of disgust and moved to walk around him. He stepped to the side, cutting her off.

“C’mon, sweet stuff,” he said, smiling and reaching for her. “They’re all gone. No need to pretend you don’t want it as bad as I do.”

Reba stepped back with quick grace, only to be brought up short against the marble wall. She looked at Todd and felt nauseated. Tall, dark, handsome, rich. The perfect prince. And she’d just as soon kiss a toad. “I’m through being polite, Todd. I’m through ignoring all your sleazy double entendres and ‘accidental’ pawing. All I want from you is a guarantee that you’ll never touch me again. Is that clear enough or would you like it notarized with copies to your lawyer?”