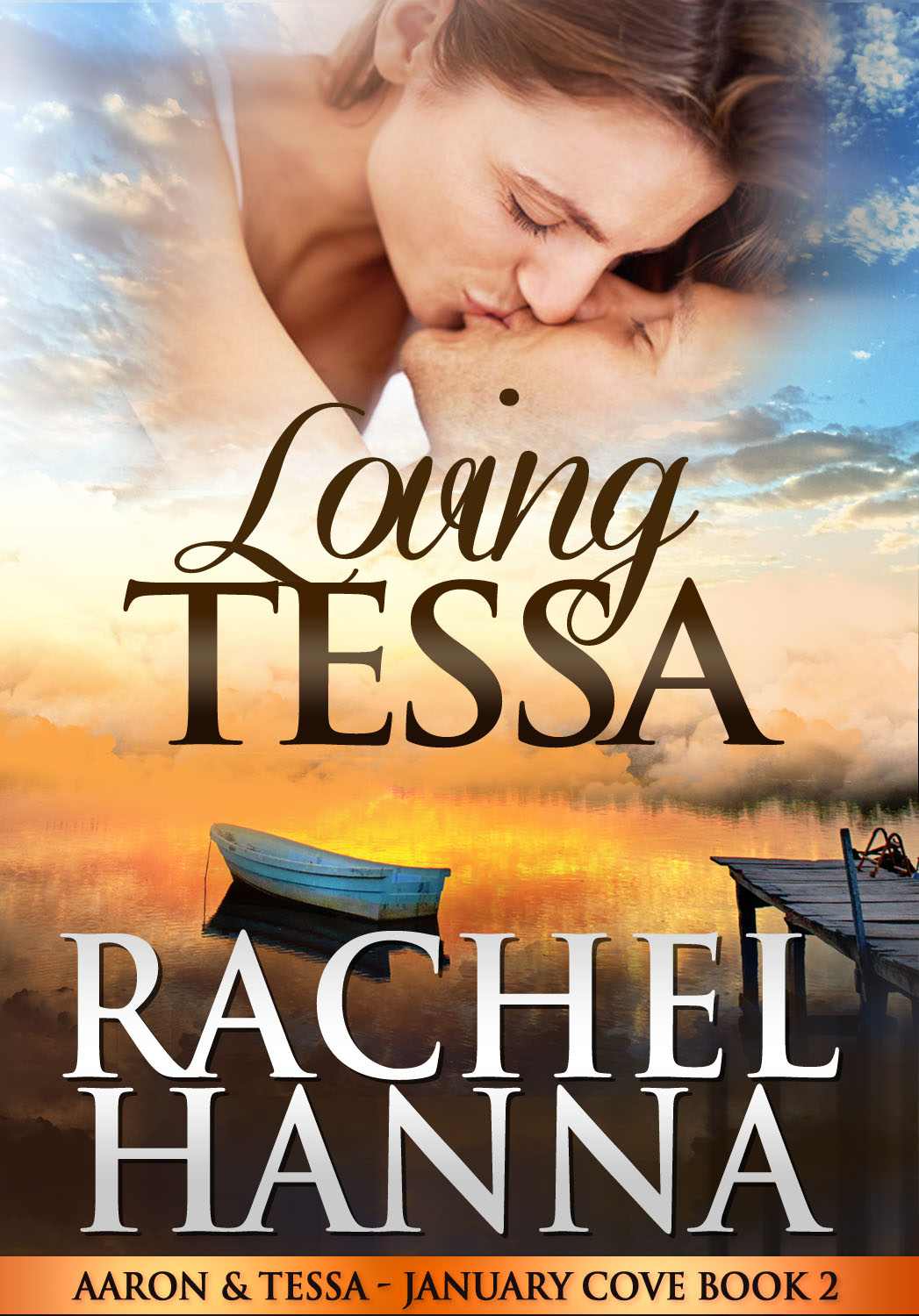 Other books by Rachel Hanna:

Love In The Falls

Get updates on NEW RELEASES and promotions by signing up for Rachel Hanna's “Loyal Reader Update List”!

Aaron Parker sat on the edge of the dock and cast his fishing line back into the still waters of the north Georgia mountain lake. He was thankful that one of his oldest friends from high school in January Cove had loaned him his cabin for a week so that he could get some rest and attempt to forget what his life had become in the last several months. But the fish weren't biting, and he was growing frustrated instead of relaxed.
The quiet of the mountains was very different from what he was used to in January Cove. He didn't realize how loud those crashing ocean waves could be until he sat on the edge of that dock and surveyed the still waters of the small lake. Simplicity. That's what he needed right now. The ocean was too complicated, brought back too many memories of the life that was taken from him.
He'd met Natalie Jenkins three and half years ago at New Year's party with friends. They'd had an immediate attraction, but who wouldn't have been attracted to Natalie? She was stunning with her long blond hair and sparkling green eyes that shot right through his soul. He'd known from the first moment he'd laid eyes on her that she was "the one". He could see them sitting on their front porch overlooking the ocean in January Cove with a passel of kids running around. He could see them as old people walking down the beach, hand in hand.
But apparently, Natalie saw something else.
After dating for three years, he'd popped the question on New Year's Eve as a reminder of when they had met. She'd excitedly said yes, and they began planning the wedding of her dreams. They would marry on the beach, of course, and honeymoon in Hawaii. Aaron had never been happier, but maybe that was how he missed the signs.
She'd started working later and later. She'd started going out with her girlfriends for drinks. She wasn't looking for her wedding dress yet, even though most women would have been scouring the surrounding areas for the perfect gown. Not Natalie. She'd changed very soon after accepting his proposal. She wouldn't set a date, said she was so busy with work.
Natalie was a marketing executive at a small advertising agency, so it didn't make sense to him that she was staying late at work or delaying their wedding. Her hours were nine to five, and he couldn’t think of any valid reason that she’d be staying late over and over. He wanted to ignore his gut feelings, but he couldn't. He knew enough to know that something was going on, and he couldn't stake the rest of his life on a woman who might be up to no good.
So, one evening when she said she was working late, he followed her. Even though it made him feel completely stalker-ish, he had to know what was going on. So, he rented a car, put on a baseball cap and waited outside of her work. As she left, he noticed a man walking with her. They seemed awfully friendly for co-workers, and she was doing "the laugh". He recognized that laugh as her way of flirting, and his stomach churned.
After driving over to Savannah, they got out at a bed & breakfast where she and Aaron had stayed on several occasions. Nausea overwhelmed him as he watched them walk inside, holding hands the whole way.
Aaron followed them inside and waited for the front desk lady to appear. She was an old friend of his, and when he entered her face went white.
"Aaron," she said softly.
"Hi, Joanna," he said pursing his lips. "I think you know why I'm here."
"I do. And I'm so sorry..."
"I need the key, Joanna." Her eyes went wide and she shook her head no.
"Aaron, you know I can't give you the key." A shy and sweet Southern woman, Joanna Eldridge was the epitome of a wallflower. But, she was kind hearted and everyone liked her.
"Joanna, I need to see for myself."
"I can't have you here fighting with some guy..."
"I won't. I promise. I'm here to let her know that we're done. That's it. No fighting or yelling or causing a scene. I swear to you."
She stood silently for a moment before sliding the key across the front desk. "I have to take care of something in the back. But, I cannot and will not give you a key, Aaron," she said with a sly smile as she left the key sitting in plain sight. He took a deep breath as she walked away and then retrieved the key from the desk.
As he walked up the hallway to room six, he knew that his life was about to change forever. Everything he'd thought was in his future was now gone, and it was about to be replaced by something he would have never imagined.
He quietly inserted the key in the door, but then he realized that it was still unlocked. He turned the knob and opened the door to see Natalie climbing onto the bed in sexy lingerie that he'd purchased for her on Valentine's Day. She was supposed to wear it on their honeymoon. The guy was already in bed, completely naked and waiting for Aaron's fiancee.

It was quiet. Maybe too quiet. Tessa Reeves stared out the window of her small camper, looking at the ocean that came in and out like clockwork. Just like the breath going in and out of her lungs without effort and thought, the ocean rolled in and out all day long. The sound of it both calmed and terrified her, but she had to put the terrifying thoughts out of her mind. Otherwise, she might roll into a ball on the floor and implode.
Her camper wasn't much, but it was all she was able to afford. Saving up her money for months, she was glad to have been able to purchase it at all. It was old, but it ran, and that was all that counted at the moment. It got her to where she needed to go, and it was her protection right now.
Nestled under a tree at the Crystal Cove campground, she felt safe, but she knew better than anyone that safety was only an illusion and could be taken away at any moment. She wasn't going to let her guard down for anyone, so she'd been keeping to herself inside the small camper with her dog, Beau, and her three year old, Tyler.
It wasn't easy to keep a dog and a toddler occupied inside of a small camper all day every day, but it was what she had to do right now until there was a better plan. She prayed that there would be a better plan soon, although she couldn't imagine a scenario that would keep her and Tyler safe.
For the last four days, she had stared out at the ocean waves, willing them to take her fears and anxieties away. So far she wasn't having much luck. For the first time in six years, she was on her own in the world. It was both scary and liberating, thrilling and terrifying.
Tyler was taking a nap, so she took the opportunity to start preparations for dinner. Money was tight, and she couldn't spare much. Getting a job would have been great, but she couldn't take the risk of being seen in public or leaving Tyler alone, so she'd have to get by as long as possible on the small amount of groceries she'd brought with her and the little bit of money she had tucked away under the flattened mattress of her bed in the back of the camper.
For awhile, she had been used to a bigger space, a nice sized house on the beach with a big kitchen and a spacious master bedroom. But she felt freer in her current space than she ever had in her old home, so she wasn't going to complain. Plus, that luxurious facade of a life had been short lived anyway. She hadn’t seen the beach up close in years.
She was less than two hours from her former life, but right now it felt a world away. She'd had to make a choice, and now she had to deal with the consequences of doing that.
An evening storm rolled over the ocean, and she stared out the tiny window of her camper as she hand washed the few dishes she'd brought along. As the thunder rumbled and the rain started to come down, she wondered how she was going to do this. How would she raise a little boy on the run?

Big Girls Don't Cry by Gretchen Lane
Florida by Lauren Groff
RESCUED BY THE RANCHER by Lane, Soraya
The Ghost Shrink, the Accidental Gigolo & the Poltergeist Accountant by Vivi Andrews
Witch Island by David Bernstein
One Way Ticket by Evie Evans
Tales Of The Sazi 02 - Moon's Web by C.t. Adams . Cathy Clamp
The Childe by C. A. Kunz
The Virgin in the Garden by A.S. Byatt
Un Lun Dun by China Mieville
Our partner