Loving You (The Bridesmaids Club Book 2) 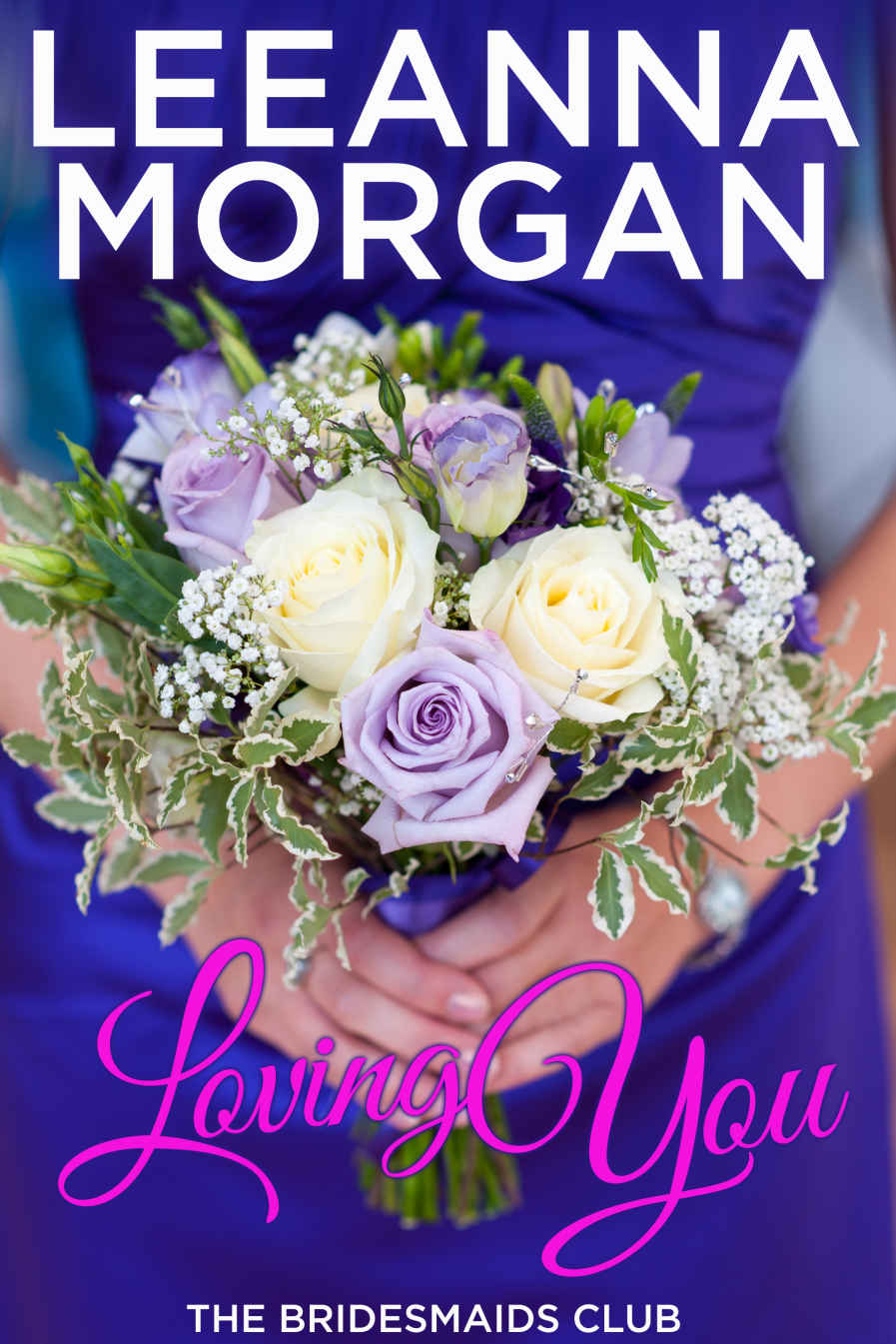 This is a work of fiction. Names, characters, places, and incidents are the product of the author’s imagination, and are used fictitiously. Any resemblance to actual events, locales or persons, living or dead, is co-incidental.

All rights reserved. Except as permitted under the US Copyright Act of 1976, no part of this publication may be reproduced, distributed or transmitted in any form or by any means, or stored in a database or retrieval system, without prior permission of the author.

If making a bride’s dream come true is easy…why is falling in love so hard?

Annie O’Leary’s life ended the day her baby died. But then she moved to Montana and found a purpose, a reason for waking up each morning. There’s something about Bozeman, something about the friends she’s made that keeps her feet firmly anchored to the ground and her heart in one piece.

Dylan Bayliss is an Army veteran and security specialist. He’s lived his life on the edge and paid a higher price than most. He’s about to face his biggest fear and Annie is the only woman he trusts enough to help him.

Annie will do just about anything for anyone, but she doesn’t know if she has the courage to do the one thing that could change their lives forever.

If you would like to know when the next book in the series is published, please go to my website
www.leeannamorgan.com
and sign up to my newsletter. Thank you for your incredible support!

Book 2: Loving You
(Annie and Dylan)

Book 4: Sweet on You
(Molly and Jacob)

Book 3: Forever After
(Nicky and Sam)

Book 6: Forever Together
(Kate and Dan)

Book 7: Forever and a Day
(Sarah and Jordan)

Book 1: Sealed with a Kiss
(Rachel and John)

“If you are always trying to be normal, you will never know how amazing you can be.”

If you asked Annie O’Leary to choose between a red hot male and a quiet night with her friends, she’d take her friends every time. Life had a funny way of working out and sometimes it wasn’t all that funny.

Four years ago, she’d arrived in Bozeman with a heavy heart and no hope of ever being happy again. Now here she was, part-time baker, part-time receptionist and part-time fairy godmother to brides in distress.

She stared out the window of Angel Wings Café, only half listening to the conversation going on around her. Six weeks ago, Annie and three of her friends had started The Bridesmaids Club. They’d read a newspaper article about a bride who’d had all of her bridesmaids’ dresses stolen from her home. Within a couple of days, they’d gathered all of their old bridesmaids’ dresses together and offered four of them to the bride. With more twists and turns than should have been possible, their first bride and groom had enjoyed a beautiful wedding.

After the publicity their story generated, they’d ended up with over fifty donated bridesmaids’ dresses, a dozen bridal gowns and a box full of letters from other women asking for help.

“Are you listening, Annie?” Tess Williams, the owner of Angel Wings Café, and one of her best friends, nudged her leg under the table.

Molly and Sally, her other two best friends, looked out the window of the café to see what she’d been staring at.

“It’s Dylan.” Sally sighed. “Does he even know how drop dead gorgeous he is?”

The first time Annie had met Dylan Bayliss she hadn’t known what to make of him. He rarely smiled, almost never touched another person, and had a way of filling up a room without knowing it. She had to admit that six and a half feet of pure male testosterone would have an impact on any room. Add in wide shoulders, a chiseled jaw, and sapphire blue eyes, and you had the makings of a man who would turn a woman’s head every time.

“Can we get back to what we need to sort out? Annie and I have to get the next tray of meals ready for the Lighthouse Café.” Tess stuck her head around the edge of the window and smiled at Dylan. “Okay. We’ve all had our hormone fix for the day. Back to work.”

“It’s all right for you,” Sally moaned. “Your fiancé has been keeping your toes warm at night. We’re not all fortunate enough to have a man like Logan Allen in our lives.”

“And some of us don’t want one,” Molly stated. Her Irish accent softened the words, gave them a lyrical quality that covered the hurt behind them. Molly’s marriage had lasted a grand total of six months. The charming, romantic man she’d married had shared his charm with someone else, and Molly was still recovering.

Sally gave Molly a quick hug. “Where are we up to?” she asked.

Tess looked at her notes. “Julie is arriving with her two bridesmaids tomorrow. She’s looked in the catalog and I’ve put the dresses she liked to one side.”

When they’d first started The Bridesmaids Club, the biggest challenge they could see was having some way of showing the bridesmaids what the dresses looked like. So Molly, a professional photographer, had put together a catalog of the dresses they’d been given. So far it was working better than they’d planned.

“I talked to my bride,” Sally said. “Holly is coming to see us next Saturday with her sisters.”

Annie stopped sipping her milkshake. “All six of them?”

“Yep. I just hope they don’t bring any extra people.” Sally leaned her elbows on the table and glanced out of the window again. “What do you think Dylan’s perfect woman would be like?”

Annie had been wondering the same thing, which scared the living daylights out of her. Unless you counted a disastrous ten pin bowling incident, she hadn’t dated anyone in over six years. She hadn’t been interested in seeing anyone or getting to know another man. Until she’d met Dylan. He intrigued her, left her wondering what was behind the super-cool exterior he showed the world.

Dylan didn’t seem to date much either, but that could have been because of his touching issue. He’d told Tess he was working on it, whatever that meant.

Annie grinned at the serious expression on Sally’s face. “I’d say Dylan’s perfect woman would be a five-foot-eight brunette. She’d have sparkling green eyes and a fondness for animals.”

Sally blushed. “I’m the worst person for Dylan. He’s too...”

All four heads around the table nodded.

Dylan must have sensed the female interest on the other side of the window. He turned and looked at each of them in turn. Annie scrunched down in her seat, too embarrassed to smile back like everyone else.

He held his wrist out and tapped his watch. Annie knew they were running late, but some things were worth a few extra minutes. Especially if they involved girly talk about the man in front of them.

“Is there anything else we’ve forgotten?” Tess asked.

Everyone shook their heads.

“Okay, so I guess that’s the end of our meeting.” Tess flipped her notebook closed. “We only went off topic four times. It’s got to be a record for us.”

Molly laughed as they stood up. “We’ll have to come more prepared next time.”

Dylan must have realized their meeting was over. He walked into the café and met Tess at the front counter. “Are you ready for me to load the meals into my truck?”

His Texan drawl sent goose bumps down Annie’s spine. Not that she’d let Dylan know that. Since the first time she’d met him, he’d carefully avoided her. They’d barely spoken, never touched, except when he’d tripped over her feet in the middle of a chapel.

“I’ve got half of the meals ready to go,” Tess said as she disappeared behind the kitchen door.

Annie walked toward the counter. They’d already put twenty meals in aluminum trays and packed them in boxes. The people that ate at the Lighthouse Café appreciated the food they made. For some of them, it was the only meal they could count on each day.

Dylan cleared his throat as Annie opened the kitchen door. “Do you want to ride with me?”

Annie frowned, then looked over her shoulder. No one was there. “You’re talking to me?”

Dylan shrugged. “I was just wondering?”

“I can’t…leave, I mean. I’m looking after Angel Wings Café. And then I’ve got bowling practice.”

Dylan nodded. “Maybe next time, then.”

Annie hurried into the kitchen and called herself every fool under the sun. She’d gotten tongue-tied around Dylan. He was a man. A perfectly normal, over-the-top gorgeous male, but a man nonetheless. And she was a confident, single woman, whose excuse for not going with him had been bowling practice.

And that told her, beyond any reasonable doubt, that there was something seriously wrong with her priorities.

Dylan parked outside Pastor Steven’s church and tried to figure out what he’d done wrong. Annie had looked as though she’d rather throw up than come with him to deliver the meals. He’d gone out on a limb, pushed his comfort zone and come up with zilch.

“You going to sit there all day or help unload the boxes?” Logan stood on the sidewalk, hands on hips and looking too annoyed for a Saturday afternoon.

Ever since Dylan moved to Bozeman, he’d been friends with Logan. They’d met eight months ago at a group session Pastor Steven organized for people with Post Traumatic Stress Disorder. His first meeting had been a strange combination of sound advice and good natured ribbing. The guys he’d met kept coming back and so did he.

Dylan pushed open his door. “What are you? The food police?”

“You wouldn’t say that if you knew what I’d been through today. The Bozeman Police Department have two officers in the World Police and Fire Games. I’ve spent the last four hours following them around to get a story about their training routine.”

Apart from being the closest friend Dylan had, Logan was a reporter for the Bozeman Chronicle. Before that he’d been a war correspondent, syndicated to more newspapers than Dylan had heard about.