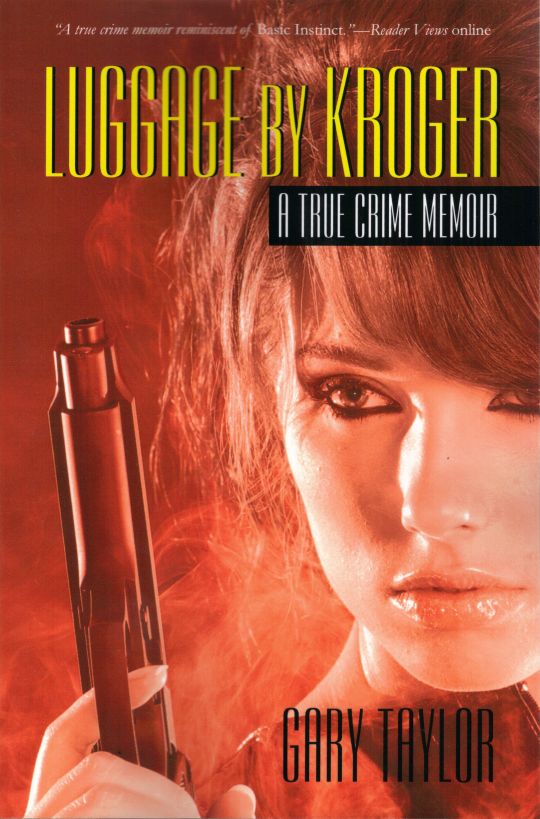 "Remember the
movie
Fatal Attraction
? And the movie
Basic
Instinct
? And the movie
Play Misty
For Me
? Put all three in a blender, hit frappe, and stand back. What
comes out would be Gary Taylor's new book,
Luggage By Kroger
."

"A riveting true story that reads
like a high-octane crime thriller."

Taylor
's Hole in the Web

Also available as a quality
paperback.

This ebook is licensed for your personal enjoyment only. This
ebook may not be re-sold or given away to other people. If you
would like to share this book with another person, please purchase
an additional copy for each person you share it with. If you're
reading this book and did not purchase it, or it was not purchased
for your use only, then you should return to Smashwords.com and
purchase your own copy. Thank you for respecting the hard work of
this author
.

This memoir is first for my descendants,
because they should have an accurate record of these
events.

It is second for all those folks over the
years who kept me out too late in bars demanding I tell it again
with more details.

And third, it is also for anyone else who just
enjoys a good yarn.

"I'd rather laugh with the sinners
than cry with the saints."

"I don't care how beautiful she is.
Somebody, somewhere is sick of her shit."

This is a work of nonfiction. I
solemnly affirm that the events in this memoir are all true to the
best of my recollection and verified by numerous legal documents.
Much of the dialogue comes from trial transcripts and depositions.
Other conversations have been reconstructed from memory. But this
was not difficult. The reader will quickly realize that most of
these conversations should have been unforgettable.

In addition, I want to emphasize my
good faith and honest effort to protect the personal privacy of
everyone mentioned in this book. To accomplish that goal, I have
referred to many acquaintances by first names or nicknames only and
have created first name pseudonyms for others in at least four
instances. Only one of those involves a character central to my
story. Wherever I considered acquaintances to be public figures I
have identified them by their complete names. In my own case I have
held nothing back. To successfully tell my story, however, I have
had to include many instances where it intersected with the lives
of others. I have worked diligently to include only information
necessary to explain their influence upon me. If I caused anyone
pain, I would apologize in advance to those who deserve their
privacy. To public figures who feel they have been maligned,
however, I will just invite them to set the record straight when
they produce memoirs of their own.

Prologue: Once upon a time in
Houston…

It was February of 2001, and I was
sitting around the bar in the Singapore Cricket Club, sharing
drinks with some British and Australian expatriates during a work
assignment in the Far East. One of my colleagues had heard about my
"Texas fatal attraction story" from someone in the states and now
wanted to know more. Although the life-changing events of my Texas
story had occurred twenty years earlier and more than eight
thousand miles away, my audience appeared as eager to hear about
them as if they had happened the day before in their
backyard.

And why not? It was a yarn I had recounted
many times since 1980 with drinking buddies all over the world. It
was a true tale about murder and adultery. It was a story dramatic
enough to have been twice optioned by Hollywood and aired three
times on TV in documentaries. It was a story that had made me a
guest on a dozen talk shows from Oprah Winfrey to Regis Philbin,
where I discussed the dangers of obsessive relationships and showed
my wounds as the poster boy for true life fatal attractions. It was
a story engaging enough to have been reported in magazines and
newspapers on several occasions since it occurred, most recently
the year before. It was a story driven by an unpredictable and
classically manipulative femme fatale who could have been
dispatched straight from central casting for a Bogart flick. It was
a story with universal appeal that touched a wide range of issues
central to the human condition: survival and redemption; love and
lust; second chances ignored and embraced; trust and betrayal;
weakness and strength; the futility of violence as a solution in
life; the limits of ambition; the boundaries of trust; fatherhood;
and, the dilemma of moral ambiguity.

It was a story I never minded telling. It was
a story that happened to me. And I began the way I always had in
the past.

"I am basically just an ordinary
guy," I said. "But once upon a time, I had a truly extraordinary
year. So, if you want to hear about that, let's order another round
and keep 'em coming. It may take a little while."

When Houston homicide detectives
arrived at the southwest Houston townhome of anesthesiologist
George Tedesco, they found patrolmen guarding a gruesome scene in
the garage. The Argentine doctor's nursing staff at St. Joseph
Hospital had asked police to check Tedesco's home because he failed
to show up for a surgery the week before. Arriving there, the
police found blood seeping from under the garage door and drag
marks leading to his body in the back. A metal pipe wrapped in a
rag lay beside him on the concrete floor, and police surmised it
had been used to bash his skull. Repeated blows had splintered the
bone, crushed his right eye, broken his nose, and knocked out
several teeth. They started trying to solve the crime.

At first, theft of the
thirty-year-old doctor's missing silver Corvette appeared a
possible motive for the mayhem. But the sheer viciousness of the
attack made that seem like overkill. Instead, police already knew
that Tedesco had spent the last year embroiled in a messy and
unusual common law divorce case that seemed bizarre for those days
in the late 1970s. In fact, trial of that divorce had been
scheduled for that very day—January 15, 1979. They decided to focus
on it as a potential cause. But they never realized things could
get even more strange. The circus was just opening its
doors.

Dictionaries define a "femme
fatale" as a "calculating woman of dubious ethics," and Tedesco's
adversary in the divorce action was an attractive, blonde
thirty-two-year-old criminal defense attorney already building such
an image around the Harris County Courthouse. Her name was
Catherine Mehaffey, and she had launched the divorce action after
living with Tedesco for just three months. Long before words like
"palimony" and "stalking" joined our legal vocabularies, Catherine
appeared to be pioneering those concepts by deeds in Houston.
Asserting herself as Tedesco's common-law wife under Texas laws of
the time, she had sued him for half of his assets, claiming all
sorts of abuse. Tedesco chose to resist, hiring a lawyer to
challenge Catherine's claims and stubbornly refusing her invitation
for a quick payoff that might spare them the embarrassment of
court.

So she had spent the year before
his death making him miserable. Oh, the cops were well aware of the
Tedesco divorce. He had sought their help on several occasions,
claiming she had followed and spied on him. He even accused her of
orchestrating a burglary at his townhouse late in 1978. His
attorney had instructed him to tape all phone conversations with
her in an effort to document her threatening activities. In those
days, however, even a pint-sized five-foot-six-inch, 166-pound guy
like Tedesco generated little sympathy when he came sniveling
around the police substations seeking protection from a woman. They
couldn't arrest her for making him nervous. She had committed no
crime. Maybe he should just grow a pair of balls and handle it
himself. After all, what's that little lady going to do? Kill
him?

After finding him in that pool of blood,
however, they began to question those initial reactions to his
pleas. They wondered if maybe they hadn't been too hasty with their
macho dismissal of Tedesco's complaints. Catherine Mehaffey
instantly took an express elevator ride straight to the top of
their "interesting persons" list within minutes after the homicide
investigation began. And discovery of a taped conversation between
them from just a couple of days before—possibly on the day of his
death—only made detectives more anxious to question her.

"Hello," he answered as that tape
began.

Her voice replied: "George? We need
to talk."

He continued: "Yes, Catherine, we
certainly do. We need more than that. You need to bring back my
stuff. Those artifacts are priceless and your people stole it
all."

Suddenly, the tape depicted a
change of tone for her, a snarl and an admission of her stalking:
"I saw you with that whore, that slut. Who was she?"

Obviously familiar with her tactics
and, of course, aware he was creating a tape that might some day
surface in a courtroom, Tedesco remained emotionless and focused,
refusing to even acknowledge her question about a recent date where
she had followed him. Instead, he quietly asked: "Are you returning
the art?"

Then her voice shifted to an
overdramatic whine with dialogue straight from a soap opera: "Why
do you do these things? You've ripped the heart right out of my
chest and stomped on it. Why can't we end this like
adults?"

He stood his ground and candidly
asked: "Why did you have to steal everything?"

Just as quickly her voice regained
composure. She sounded every bit the lawyer in a cross-examination:
"I don't know what you mean. But we can talk, can't we? I can come
over…"

He interrupted with an angry
retort, shouting, "You can come over and bring my shit home. Then
I'll tell the police to stop the investigation. If I don't get my
shit you'll be sorry."

Catherine's voice dissolved into
that of a frightened girl, showing that she, too, was playing for
the tape recorder, preserving the record on her allegations of
abuse. Almost sobbing, she said: "You will promise not to hurt me
again?"

He ignored the trap and avoided a
debate on whether or not he had been guilty of violence. Instead,
he simply replied: "I'll be here."

The tone on the tape was chilling
and the implication clear. Recently, it appeared, Tedesco and
Catherine had arranged a meeting at Tedesco's home where he had
been found murdered. That tape was destined to become a classic in
the police department's archives, a conversation piece for the next
year or more as top cops and prosecutors analyzed the range of
emotion, the danger it betrayed, and the sound of a dead man
talking to someone who might have become his killer just hours
after it was made.

The Academie by Amy Joy
Mind's Eye by Richards, Douglas E.
1915 by Roger McDonald
Godfather by Gene D. Phillips
Montana Sky by Nora Roberts
Together Apart by Dianne Gray
Too Rich and Too Dead by Cynthia Baxter
His Brothers Wife by Paulin, Brynn
An Honest Heart by Kaye Dacus
Awakening by Cate Tiernan
Our partner