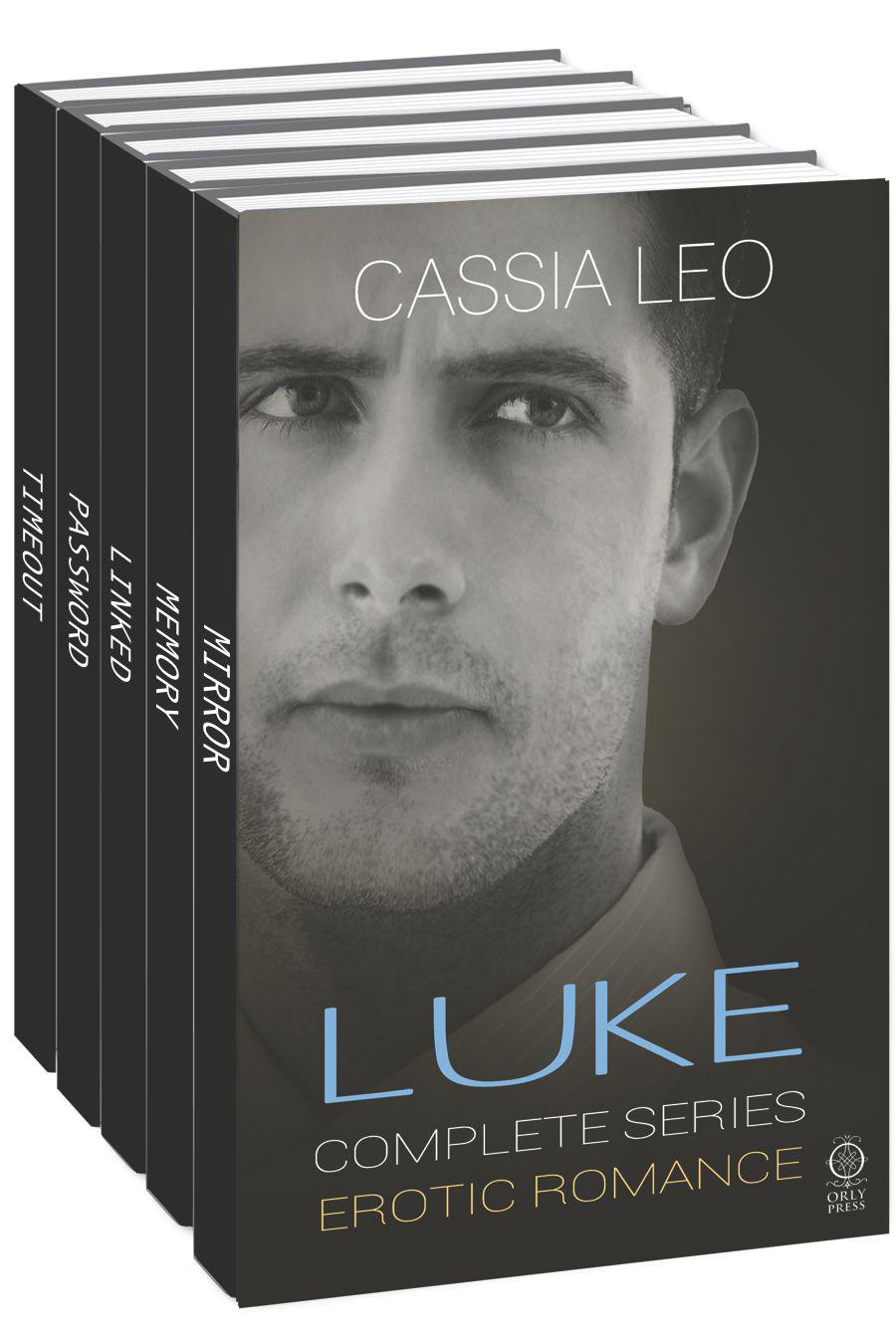 Other Books by Cassia Leo

Be careful what you wish for, you just might get it… hard and fast. That was how my rise at NeoSys, Inc. happened. One day I was an intern for the Director of Marketing, the next I was the most trusted corporate spy working under the COO of the second biggest software company in America. Well, actually, we didn’t call ourselves spies. My official title was Competitive Intelligence Officer.

I had worked for NeoSys for just over two years, since the last semester of my senior year at Cornell. NeoSys employed over 10,000 software engineers worldwide, creating everything from mobile phone software to virtual environments. We were second in the industry only to Maxwell Computers, and my job was to fix that.

I walked into the reception area at Maxwell Computers’ corporate office in Seattle, trying to regulate my breathing as I anticipated my interview with Luke Maxwell: the hottest CEO in America, possibly the world. I swallowed my nerves as I passed a setup of sleek gray sofas on my way to the receptionist’s desk. The glass ceiling in the lobby flooded the space with intense natural light and gave everything an unnatural glow, as if everything at Maxwell Computers shined with the light of God.

It seemed everything Luke Maxwell touched these days was blessed. Twenty-eight years old and he was the richest man in the country. People across the globe, from toddlers to seniors, were scrambling to get their hands on his latest products. All I wanted was to get my hands on the password for a software project he had dubbed “Blaze: The greatest innovation to hit the industry since the Internet.”

The receptionist wore square glasses, which were half-covered by her long, black bangs. With her gray hoodie pulled over her head, she looked young enough to be in high school. She stared at me as I approached the desk as if she were trying to make me even more nervous.

She squinted at me for a moment before she answered. “You’re Brina?”

“Uh, yes, I’m Brina. Is he expecting someone else?”

She looked me up and down a couple of times before she shook her head and touched her glossy white computer screen. The screen came alive and another woman’s face flashed on; a woman I recognized. She was older, maybe late fifties, but she was impeccably made up with her hair in a neat twist and her makeup looking like it had been painted on by Hasbro. But she wore a plain black t-shirt, like the t-shirt the receptionist was wearing.

“Janice, the ten a.m. interview is here,” the receptionist said and the fifty-some Barbie lit up with glee.

“Well, send her up. You know Mr. Maxwell hates it when we keep him waiting.”

It seemed odd to me to hear an older woman calling twenty-eight-year-old Luke Maxwell “
Mr.
Maxwell.”

The receptionist looked up then pointed at an elevator lobby to my right. “Twelfth floor.”

The two doors I passed on the way to the elevator were so glossy and white I could see my reflection. I reached the elevator and was not surprised to see myself again in the glass doors. I pressed the call button and resisted the urge to start adjusting my hair. The doors slid open and I stepped into the elevator. The walls and bottom of the elevator were also made of glass and I quickly grasped the handrail once I had pressed the number twelve button.

One look through the transparent floor at the cables beneath the elevator cabin and I closed my eyes. I hated elevators. I hated anything that forced me to climb higher than two feet off the ground. My brother’s broken body flashed in my mind and I gritted my teeth against the image, but I could already feel the panic building as my heart raced and my mouth went dry.

A fucking glass elevator!
Couldn’t someone have told me this before I agreed to take this assignment? I bit my lip hard enough to draw blood as I tried to push out the thoughts of the day my brother chose a flying leap over one more tour of duty.

The elevator stopped and I kept my eyes level as I opened them so I wouldn’t glimpse the hundreds of feet of empty space below me. The glass door slid open and I rushed out onto the polished concrete floor of level twelve. Barbie smiled at me from her pristine white desk a few yards away. Again, it looked odd to see this woman with her perfect hair and makeup wearing a t-shirt and jeans. I was beginning to feel out of place in my gray pencil skirt and silk oxford.

“Hi, I’m Brina Kingston,” I said, being careful to keep my voice level and my shoulders back as I approached her, thoughts of my brother quickly evaporating into a cloud of anxiety over meeting Luke Maxwell.

“Hello, Brina. I’m Janice.” We had to pretend we didn’t know each other. “Mr. Maxwell is on a phone call,” she continued. “He should be ready for you in just a few minutes. Please have a seat. Can I offer you something to drink? Water, coffee, diet soda?”

Diet soda?
Was Janice implying I needed to go on a diet? I resisted the urge to inform her I'd had multiple modeling job offers before I joined NeoSys two years ago at the age of twenty-one. One photographer called my breasts, “more luscious than a two scoops of vanilla ice cream.” I wasn’t a size zero, but no one had ever called me fat—except my brother when he really wanted to hurt me.

I had drunk half a gallon of water this morning in preparation of today’s meeting. I didn’t want my mouth to go all dry and crackly in the middle of the interview. I didn’t expect to get the job on the first try—I already had my follow-up phone call scripted—but nothing could be left to chance today.

I took a seat in the cold, glossy white chair and set my purse on the chair next to me, fighting the urge to reach inside my purse and take out my Maxwell Flame phone. I told my boss at NeoSys that I had only bought the Flame for appearances, to nail the interview, but the truth was that it was far superior to the phones that used NeoSys software. If we didn’t get our hands on Maxwell’s newest software creation, we would lose all prospects at a half-billion-dollar deal with Imitex Robotics to develop the software for their new artificial intelligence line of products.

A soft pinging sound came from Janice’s computer and she tapped the screen before she looked at me. “He’s ready for you. You can go right in.”

I grabbed my purse and headed for the glossy door behind her. I turned the lever on the door and the weight of the heavy door seemed to carry it open on its own. I stepped inside and panicked a bit when I didn’t see Luke at his desk. I stepped farther inside and saw him standing at the far right end of the office near a wall of transparent floating shelves stocked with everything books to bottles of bourbon. He was pouring himself a glass when I caught his eye.

He seemed to be the only person in the office wearing business attire: a crisp shirt and slacks and a thin blue tie. He looked like he had stepped out of a Gucci ad. The morning sunlight poured in through the windows behind him and sparkled in his glass.

He placed the bottle of bourbon on a shelf and cocked his eyebrow; a simple gesture that made him appear even more gorgeous. “
You’re
here for the interview?”

The inflection on
you’re
confused me.

“I’m sorry, were you expecting someone else?”

He tilted his head at me as if he was the one who was confused. “Well, yes, I was expecting someone a bit… older.”

My body tingled as he approached me with his glass of bourbon clinking in one hand, his other hand reaching into the pocket of his slacks. My gaze roamed over his perfect cheekbones and lips, mesmerized.

Come on, Brina. Say something.

“I… I can assure you I’m the most qualified candidate at the agency,” I replied, with only a slight warble in my voice. “Joplin only farms out the best and brightest for their executive positions.”

“Executive positions.” He repeated this as if it meant something more and I suddenly had a weird image of Luke and I executing a few positions in my bed.

I tried not to blush at this thought, but I couldn’t hold back my smile. “I
am
here to interview for the position of executive assistant, aren’t I?”

He was just a couple of feet away from me now. With the glow of the sunlight behind him and the soft smile on his face he looked positively angelic. I wanted to reach out and stroke the light shadow of hair on his jaw.

He brought the glass to his lips and took a sip. “Have a seat.”

Mental note: He drinks in the morning.

I exhaled slowly before I took a seat in front of his desk. He sat in the spinning silver chair on the other side and set his glass on the desktop. He spun around in his chair so he was facing the wall of windows.

“Why do you want to work here, Brina?”

I hadn’t introduced myself yet, so that meant that Luke was good with names.

“At the risk of sounding like a groupie, I love Maxwell products and I really admire what you’ve done for the industry. I’ve wanted to work here since I was a freshman at Cornell.”

It was all true. I had actually applied to Maxwell Computers before I applied to NeoSys, but NeoSys called me first and I was desperate to get my foot in the door. I never did hear back from Maxwell Computers on that internship and now I was glad for that. I probably never would have been promoted so quickly in a place like this.