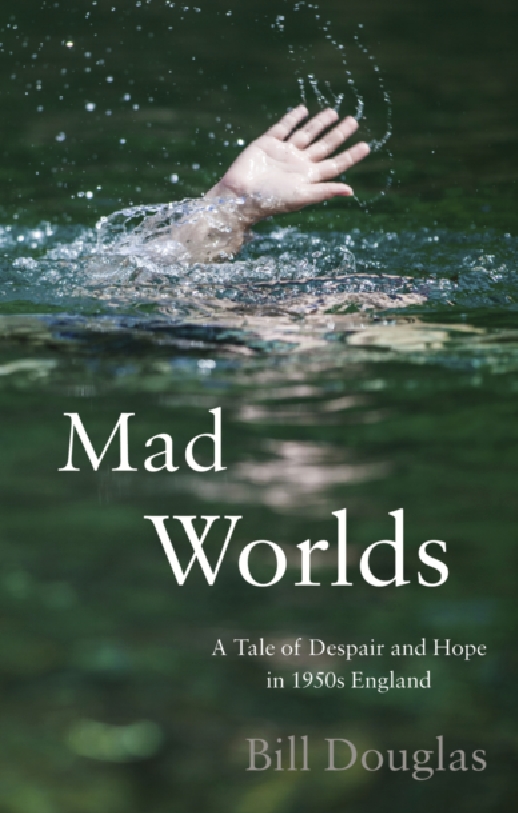 Mad Worlds
A Tale of Despair and Hope in 1950s England

Apart from any fair dealing for the purposes of research or private study,

or criticism or review, as permitted under the Copyright, Designs and Patents

Act 1988, this publication may only be reproduced, stored or transmitted, in

any form or by any means, with the prior permission in writing of the

publishers, or in the case of reprographic reproduction in accordance with

the terms of licences issued by the Copyright Licensing Agency. Enquiries

concerning reproduction outside those terms should be sent to the publishers.

Matador
Â®
is an imprint of Troubador Publishing Ltd

Converted to eBook by
EasyEPUB

For my dear wife Elisabeth

And all my family

Praise for a Pre-publication Draft

Praise for a Pre-publication Draft

âThough historical, this book highlights the ongoing urgent need to think and talk about mental health.'

âLots of the background details are fascinating (and fit with my understanding of what went on at the time). Some episodes/scenes in the mental hospital are very powerful.'

âIt is quite an achievement to portray so vividly that slice of history. The use of dialogue is good, keeping the momentum going. Good portrayal of the characters reminded me a bit of those in
One flew over the Cuckoo's Nest
.'

This novel shows dramatic happenings â largely on the mental health scene â in 1950s England. The town of Aversham, Springwell Mental Hospital, and the characters, are all fictitious â but they reflect the realities of that time. I've also used the kind of language that was around then.

Generally, care and treatment will be more enlightened now than in the 1950s. Ignorance and fear should be less prevalent in public attitudes. Yet many who have âbreakdowns' will experience stigma and discrimination â and the public awareness campaigns must be ongoing.

I hope this tale will grip you and move you. And if you're interested in the historical mental health context, you'll find a brief commentary on this in a postscript to the novel.

In the night John hears Da shouting, Ma crying. He sees Dave â in the moonlight by the half-open door â poised, neck straining. He creeps from the bed to join his bruv in listening, but he can't make out what Da's shouting. He tiptoes back to bed.

“What's it about?” he whispers.

Next thing, Dave's shaking him by the shoulder. “Get up Johnny, we're late. I'm goin' now.”

As he scrambles into his clothes, he hears Dave clattering downstairs and the front door slamming.

Must get to Danny's for his paper round. He takes the stairs two at a time. The room's dark, miserable â the curtain's not been pulled back. He spies a glint in the corner. The wheelchair â and in it his da, who has no legs since the pit accident.

Ma's in her nightgown and bending over Da. John stops. “'Bye Ma and Da,” he shouts. No reply, so he takes a step nearer.

Ma twists round and points to the door. “Go, Johnny.” A quiet command.

Gotta get to Danny's fast. He turns and runs through the open front door and slams it behind him.

He races down the hill to the shop. Big Danny standing outside, thunders, “Johnny Chisholm, I've been tellin' your brother â you pair o' blondies have to get your bums here by seven o'clock sharp. If you can't, there's other lads hungerin' after your jobs.”

He feels like charging at the man, thumping the swollen belly. But he needs this job, this money. “Sorry,” he manages, looking down. Maybe he's real late â didn't look at the clock before he came out. Dave's his timekeeper. And he always trusts his bruv, who's two years older after all.

He gets his sack of papers and rights the heavy bike. He's eight now and just big enough to manage it. He wobbles, gets up speed, and he's on his round. Dave's already gone the other road.

Big bully â that Danny! And he hates the man calling him and Dave âblondies', all because they've blond hair. “Makes us sound like girls,” Dave says.

The Hawthorns, number ten. That dog yesterday â must be new â nipped his fingers as he pushed the paper through the letterbox. Still hurts. So he leaves the paper halfway, sticking out. He listens, and chuckles as the paper disappears to a snarling. The dog's ripping it up.

Something to tell Dave. Dave's always telling him stories. They've scrapped from when he was little, and sometimes Ma and Da had to pull them apart. The age gap never held him back. But Dave's his best mate, who always looks out for him.

Back home first â his round's shorter than Dave's (and he gets paid less). Ma's in the corner, sitting beside Da. She's whispering and Da's grunting. John can't see the porridge pan on the range.

“Get your own breakfast, son,” Ma says.

Things must be bad. He gets the stale loaf from the bread bin and cuts himself a slice. Spreads the dripping on nice and thick. He pours a cup of water, gulps it down. He stands, chewing the bread slowly, making it last.

Dave bursts in. “Beat me again bruv.” John feels a tap on the back of his head. It's solidarity, though Dave's also reminding him who's bigger.

“Davy, your sandwich and drink are in the cupboard for you.” Ma points.

Of course, the class trip Dave told him about â to the sea, on a bus. Sounded great. He can go year after next.

There's a clatter in the corner. Da's crumpled on the floor. Ma shrieks. She's kneeling. Dave's there first, stands over them.

Yesterday he saw the legs that came for Da. Even with no legs, his da would walk again. “Magic legs, my boys,” Da said.

Da's scrabbling and cursing on the floor. Ma's still down there, crying. John stands with Dave, ready to help.

Ma stands up, and he and Dave move in. “Under the arms,” says Dave. And they struggle, with Ma's help, to get Da, grunting and sweating, back in his wheelchair. Da's only little now, but weighs right heavy.

“Thanks, my boys. The magic in these legs isn't working yet.” His da's smiling, but there's tears â or is it the sweat?

“You go to school, boys,” says Ma, hugging Dave then him.

He grabs his schoolbag and trails Dave, charging down the hill and into the school. He hears Dave shout “See ya bruv,” and watches him go to a classroom.

Afternoon, the last lesson's just started. John's yawning. There's knocking on the classroom door. Mrs Heggie the teacher goes to the door, and holds it open while she whispers with somebody.

Mrs Heggie turns round and calls out, “John Chisholm, the Headmaster wants to see you.” He grips the desk. He'd been real late for school, and he'd maybe get the belt. Dave would still be on his trip.

Then a surprise. A woman greets him at the doorway with a smile, takes him by the hand. “Come with me John. I'm Miss Blake, the Headmaster's secretary.”

“I'm sorry for being late,” he mumbles as they walk along the corridor.

Miss Blake stops. “It's not about that, my dear,” she says, looking down at him. He feels her squeeze his hand. She looks sad, like she's been crying.

They walk till they reach a door that reads âHeadmaster'. She knocks and they go in. The Headmaster sits in a black gown â with a funny hat on his head â behind a big desk. A red-haired woman's standing by the desk.

“Sit down, John.” The Headmaster points to a chair at the desk.

He sits down. Miss Blake stands beside him, still holding his hand. Warm, sweaty, nice.

The Headmaster coughs again. “Your brother David has met with a very bad accident. We'll take you home to your parents.”

No, not Dave! “Butâ¦ he'sâ¦ an accident?” Would Dave be like Da â in a wheelchair?

The red-haired woman looks his way and says, “John, I'm David's teacher. He fell into deep water and we couldn't save him. He's drowned.”

He feels the hand tighten on his. He wrenches free, stands up, bangs the desk with his fist and shouts, “You liars!”

The teachers have gone, and John's at home with Ma and Da. Da's silent, staring from his wheelchair. Ma's wet face wrinkles up as she wails “that canna' be.” John feels the warmth of her shaking body, smells her sweat, as she hugs him close.

He doesn't cry. He rages inside â at that teacher, at Dave for not coming home. âSee ya bruv' said Dave â huh! Ma releases him. He runs up to his bedroom and burrows into his pillow. After a while he lies on the bed and stares at the ceiling. He'll take Dave's paper round as well as his own. He'll give up footie after school, get straight home and help Ma with the housework, Da with his legs. He'll work hard at school, and when he grows up he'll be a teacher â like Dave would've been.

Sleep? He's too wide awake, and lies thinking of the times before Da's accident.

Da comes home in the evenings, always gives a roar â “Where's my boys?” â and gets down on his haunches. He and Dave race to be first. Da scoops them up, one under each arm, whirls them round, and stands them back on their feet. Da picks him up, throws him in the air and catches him, then nuzzles into him, makes him giggle. Then it's Dave's turn. Dave shouts and giggles too.

Da laughs, kneels on the floor, cuddles him and Dave, and says “My wee rascals â love you both.” He likes it when Da's in his miner clothes, with a black face and smelling real sooty. “It's the coal dust magic, my boys,” says Da.

He reaches across to punch Dave in the back â but he hits the mattress, and scrabbles with his hand to the other side of the bed. He buries his face in Dave's pillow.