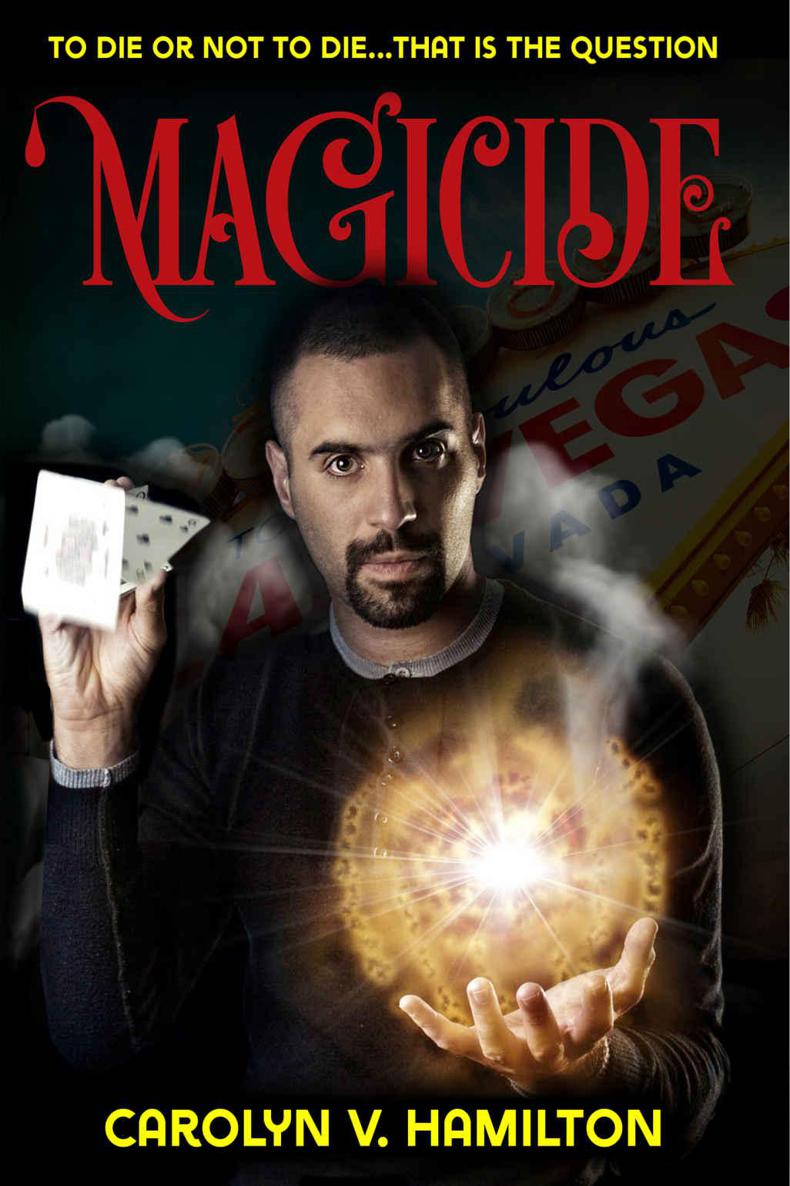 To die or not to die, that is the question

“A fast and fascinating read about magicians and behind the scenes goings-on in Las Vegas from an insider's perspective. Couldn't put it down! Loved the ending - just desserts!”

No part of this book may be reproduced in any form (electronic, mechanical, photocopying, recording or otherwise) or by any electronic or mechanical means, including information storage and retrieval systems, without permission in writing from the publisher, except by a reviewer who may quote brief passages in a review.

This novel is a work of fiction. All characters, organizations, and events portrayed here are either products of the author’s imagination or are used fictitiously.

Her hands tight on the wheel, Larissa Beacham-Jones maneuvered her Mercedes into the valet parking line at Las Vegas’ Dunes Park Resort & Casino. With one hand she nervously brushed aside the long blond strand she’d purposefully left separated from her coifed French twist.

Her son, Peter, leaned forward in the passenger seat to stare through the windshield upward to where the steel track of the Heldorado Hypercoaster, the world’s tallest and fastest roller coaster, dipped down to pass through the porte cochère and startle arriving guests.

Peter sighed. “I know. Your father forced you to ride that Rolly Polly when you were five.”

“And when I threw up he
laughed
. And tonight the world’s most famous magician,
Maxwell Beacham-Jones
—“ Sarcasm laced Larissa’s pronouncement of her ex-husband’s name. “will be handcuffed and chained to the track, with seconds to escape those speeding Hypercoaster cars.”

The first lift of the Heldorado Hypercoaster passed through the roof of the casino to drop through a tunnel at eighty-six miles per hour. Known for its 155-foot spiral drop, at three points the Hypercoaster gave riders a screaming thrill that was as close as they would ever come to a zero gravity experience.

Larissa smiled at the valet attendant who opened the door of the Mercedes. Even at this late night hour she felt the blast of desert heat. At five-foot-five, she was able to swing gracefully out of the driver’s seat of the Mercedes and step out.

“Lariss
a⎯
Mr. Jones, good evening.” Though the attendant addressed them both, his gaze was fixed on the cleavage between the rhinestone-edged lapels of Larissa’s purple jacket.

“It’s a pleasure to welcome the First Lady of Magic to the Dunes Park,” the valet said, a silly grin across his unmemorable face. “Love your show.”

He walked quickly around the front of the car to open the door for Peter. “Yours, too,” he said, as Peter unfolded his long legs and swung them to the pavement..

“We sure hope Maxwell makes this one all right.”

Larissa handed the valet her car keys in exchange for the orange claim ticket and said, “He’ll ace it as easily as he did the underwater coffin escape.”

Peter pulled at the cuffs of his custom-made shirt, a habit he’d developed to hide the scars on his wrists, and smirked. “Nothing scares the
magnificent Maxwell
.”

The valet opened the ornate brass and glass doors and Larissa Peter entered the casino.

The garishly-patterned carpeting in jewel green, turquoise red and gold did nothing to dull the din of slot machines and loud chatter from tables full of exuberant gamblers. Larissa winced and put her fingers to her temples. “Why do all casinos smell the same—old cigarette smoke and spilled drinks?”

“Because they are the same,” Peter said.

From the direction of the hotel’s reception area, a man in a Hawaiian shirt and faded denim shorts walked up to Peter. “Excuse me, aren’t you Peter Parrot?” he asked, breathless. “My kids love your show!”

Peter smiled. For television his heavy, shoulder-length black hair that parted from the widow’s peak at the top of his forehead was pulled back and smoothed under a hair net. “Not many people recognize me without the costume.”

“I saw your picture in Veranda Fox’s column when you emceed the City of Hope fund-raiser.”

“Is it true they’re going to syndicate it all over the country?” The man talked quickly, as if he didn’t want to let Peter get away. “And make products? Boy, I’d buy puppets for my kids. You want to be sure they make puppets of your characters. You’ll make a lot of money off puppets.”

“I hadn’t thought of that. Thank you for the suggestion. It was nice to meet you.”

Peter turned away just as the man added, “My wife says you’re just as good-looking as your handsome father. You do look just like him.”

Larissa saw Peter’s eyes darken. He did not acknowledge the words she knew the man meant as a compliment, words that no doubt reminded Peter of things he didn’t want to remember.

She followed as Peter headed in a brisk walk around the dice pit to the entrance to the Heldorado Hypercoaster. A floor-to-ceiling advertising poster on one wall of the casino read,
Three 5-coach Trains! Six Thousand Feet of Steel Track! Two Minutes and 43 Seconds of Screaming Thrills!

Larissa’s hand fluttered to twist the strand of blond hair that curled her cheek.
“
The newspaper story about the Hypercoaster said from its highest point, the 225-foot drop has G-Forces close to 4.0, like astronauts feel on a shuttle take-off,” Larissa said. “They say 125 million Americans will watch this. That’s bigger than any of Maxwell’s previous audiences.”

“Come on, luv,” She lightly punched her son’s arm in an attempt to raise his spirits. “This will be Maxwell’s zenith. It’ll be crackin’, second only to the Superbowl record of 144 million viewers.”

Peter stared straight ahead as they picked their way through the crowd in the casino. “These people will drop millions in hard-earned cash now,” he said, “but they won’t miss the chance to see Maxwell kiss the tracks. The pavilion’s this way.”

Larissa regarded Peter’s square face, the deep cleft centered below narrow lips. That man was right, exactly like his handsome father, she thought. She shook her head. “So bloody jaded at twenty-four.”

They’d reached the bank of slot machines that lined the curved path leading to the outside when they heard the ever-present casino pager.

“Who’d page you by that name?” Larissa said.

“Someone not well-informed,” Peter growled. “I dropped that ‘Beacham’ shit a long time ago.”

“I know you hate being so much like him, luv. He wasn’t my favorite person either, but I know he would want us here to support him. Besides, your show’s a hit. You’ve made it all on your own.”

“Are you going to.answer it?”

His face contorted into a hard landscape of angles. “I guess.” He tugged at his cuffs again. “You go ahead and find the seats. I’ll be along in a minute.”

Larissa opened her purse. “Here’s your VIP pass. Don’t take too much time...”

Without a glance at her face, Peter took the pass and headed for a nearby bank of house phones.

Heat slammed at her again when she passed from the air-conditioned casino to the outside swimming pool and tennis courts, next to the roller coaster launch. Between the tennis courts and the wall where the coaster tracks came out of a tunnel, temporary stands had been constructed to hold VIPs
.

She climbed the bleachers, found their seats and sat down.
What’s done is long done. I can handle this now,
she thought.

“Sorry I couldn’t get us into the VIP stands,” Cheri Raymer said, tucking the ticket stubs into the side pocket of her purse. She shrugged the shoulders of her white blouse in an attempt to create a cooling space between the cotton fabric and her skin, damp from the night air.

The sixteen-year-old’s enthusiastic grin told her he didn’t care about the seats, he was just glad to get to see the event. Cheri had spent half a week’s salary on the best tickets she could get so her son could be as close as possible to the action.

“
Wooo
—look at Maxwell! All that red leather and rhinestones.” Tom, always the organized one, had brought binoculars so he wouldn’t miss any detail. “You’d think it’d be tough for him to move on the track, being all bundled up like that, especially in this heat.”

“Probably it’s some new thin stuff that just looks like leather from here. Can you see the chains on the track?” Cheri found herself excited by the cheering crowd, too.

She was glad it was her night off. Let some other detective investigate the sins of Sin City tonight. Later, her son would never be able to say she stopped him from an opportunity to witness the great Maxwell perform in person. She’d have brought her sister, Bonni, too, but Bon, the “prettier sister”, worked as a cocktail waitress on the graveyard shift at the Sultana Hotel/Casino. She’d sleep peacefully at home through the whole thing.

Tom’s hazel eyes didn’t move from the magician. “He’s not there yet. He’s still working the crowd. See, that’s part of the build-up. A lot of the success of a magic trick is in the set-up.”

In the past year Tom had grown four inches and taken up this new hobby—magic. She wanted to be a supportive mother, but she’d hoped this new interest in magic and magicians would fade away after a few months. But Tom seemed more knowledgeable and excited about it than ever. He said he wanted to learn from observing the best. But a career as a magician? She didn’t want to even think of what she would do if he decided that’s what he wanted; she didn’t know if she could face that so she tried to dismiss it from her mind.

“Can you introduce me to Maxwell?” Tom asked without putting down his binoculars.

“Yeah, but you know him. You told me you and Larissa were best friends.”

Cheri shifted her body and rubbed her right thigh. “Yeah, but, nothing.” This temporary seating the hotel had set up was not all that comfortable. “What I said was that we
used
to be best friends—a long time ago. I only met Maxwell a few times.”

“First impression?” She made her voice sound flip. “Why, tall, dark, and handsome, of course.” And then he changed my life. She laughed out loud to chase away the haunting memory.

“No, really. What was Maxwell like then? Was he as good as he is now?”

She took a deep breath and mentally called upon what she thought of as her police voice.

“Larissa had just started dating him. She was young and impressive and nuts about him. He cared about her—as much as a rising star could care about anybody. You got the impression that no matter what, his magic came first.”

“So you couldn’t call her, and get his number?” Tom pressed.

“It’s been years since I’ve spoken to her. Besides, they’re divorced. I wouldn’t know what to say.”

Without letting go of the binoculars he held to his eyes with one lanky hand, he grabbed her arm.

“Look, he’s climbing the ladder to the track! This’s gonna be great.”

She let out a breath of tension and focused her eyes on Maxwell, imagining the figure she saw climbing to the track to be a stranger, a famous entertainer she had nothing to do with. She didn’t want to remember about him and Larissa. There were some things you didn’t tell your children, no matter how old they were.

The Vampire of Ropraz by Jacques Chessex
Time and Again by Jack Finney, Paul Hecht
The Rocker That Loves Me (Volume 4) by Terri Anne Browning
The Spider Thief by Laurence MacNaughton
SLEEPING DOGS (Animal Instincts Book 6) by Chloe Kendrick
The Bolter by Frances Osborne
Thunderbolt over Texas by Barbara Dunlop
The Black Door by Velvet
The Burglar Who Painted Like Mondrian by Lawrence Block
Night of the Candles by Jennifer Blake
Our partner