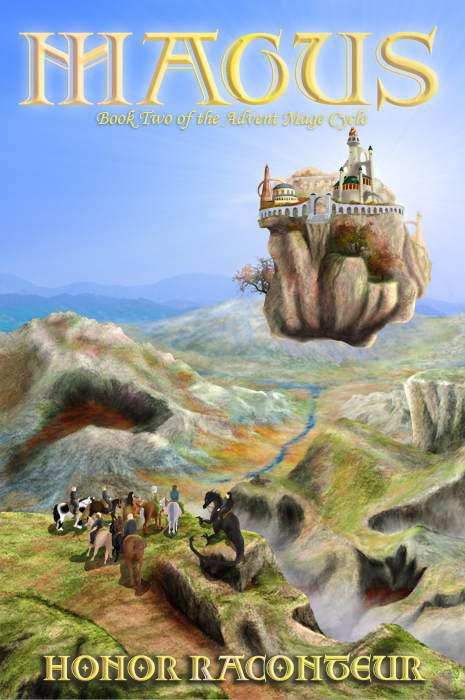 Many thanks to my family, as usual, for giving me their time and attention when I needed it—and silence when I needed that instead. Special thanks to Pam, for all of her wonderful input, and to Velvet, who got me unstuck after I spun my wheels helplessly for three weeks. I’d be lost without both of you. Thanks go as well to the usual suspects—Jen, Ken, Peggy and Dave. I’d peter out without your enthusiasm and thoughtful questions. And last, but never least, thanks go to my wonderful editors and critics: Katie, Jen, my father, Mike; and LaNelle. I don’t know how the story would have looked without you. I’m blessed to have such wonderful friends.

Chapter Eighteen: Cause and Effect
456

"What have you done?"

He didn't know how to answer that question. Slowly, his head turned as he took in everything around him. The caravan was in shambles with wagons overturned, trunks and boxes scattered around them, their contents spilled out over the ground. The horses were still shifting about in panic, some of them tangling the reins in horrible knots. People were scattered everywhere, some standing, others leaning against the wagons in various positions…others horribly still on the ground. There were cries and moans of the wounded—and the terrible silence of the dead.

Finally his eyes traveled to the body lying at his feet. The bandit had probably been fairly young, but the hard life of thievery had put age into his face. It was in that slack face that he found an answer to the question.

"The only thing that I could do," he whispered.

"De Xiaolang," his uncle demanded with a voice thick with tears. "What have you
done
?"

De Xiaolang was not quite a man, being only eleven, but he would not duck away from the consequences of his actions. He knew that murder, even in self-defense, was the worst crime possible among the Q'atal. His people could not forgive the taking of a life. He knew that. He understood that. He just hadn't been able to stand aside when the bandits had descended on the caravan and started killing his family and friends. He had done the only thing that he could do—made the only choice that he could make—and picked up the bow he used for hunting. The bandits hadn't expected any of the Q'atal to fight back, and after three of their company fell, they had broken and run in panic.

Drawing a deep breath into his lungs, he sought for the courage hidden somewhere deep within him to face what he knew was coming. He didn't feel like he had enough, but he turned to his uncle regardless. "De Shiolang, I will leave your house."

His uncle flinched in pain. "You are too young to put yourself in exile," he denied harshly.

"I will accept the consequences of my actions," De Xiaolang answered with quiet conviction. "You must accept this. Even if I could do it over, I would react the same way."

His uncle could do nothing. The law was clear on this, and there was no lenience. He nodded jerkily, face tight with pain.

Without a word more between them, De Xiaolang gathered up his bag of clothing, put in a few items of food and a few other necessities, and rolled up some blankets together. His uncle wordlessly pushed a bag of money into his hand, embraced him hard, and then turned his back resolutely to his young nephew.

De Xiaolang walked away from the caravan, each step separating him from his homeland. He didn't turn to look behind him, to take one last look.

He was afraid his courage would break if he did.

"Let me get this straight; a group of bandits attacked your caravan a few days ago, and you picked up a bow and killed three of them?"

De Xiaolang could not blame the captain for his disbelief. If it hadn't happened to him, he'd have a hard time believing it himself. His people were notorious for being very reclusive. Q'atalians did not leave their homeland except for quick business trips. Period. De Xiaolang was the first one to be exiled in hundreds of years. In fact, their written history didn't go back far enough to record who the last person was to be exiled, or why. Rather than repeat himself, he simply nodded.

Captain Magavero sat back in his chair, studying the young boy in front of him with intense scrutiny. A patrol had stumbled across the young Q'atalian early that morning and had promptly escorted him to the nearest battalion headquarters, which happened to be Magavero's. Like all Q'atalians, this boy had thick blue-black hair, light blue eyes, and a thin build. He apparently spent a great deal of time out of doors, since his skin was nearly white, instead of the typical dusky blue that most Q'atalians had. Magavero had heard that the sun could bleach a Q'atalian's skin white; he just hadn't seen it until now.

He'd never heard of a Q'atalian hurting anyone before now, or one being exiled. There was something about the boy's expression, however, that made the captain believe him. No Q'atalian would voluntarily leave their country. Something drastic must have pushed the kid to leave, that much was certain.

"From what you tell me, it was clearly self-defense," Magavero finally stated. "Won't your authorities take that into consideration?"

The word was stated with such finality that Magavero couldn't bring up an argument against it. Letting out a low breath, he sat back up, leaning forward over his desk in order to bring himself closer to eye level with the boy. "All right. So what do you plan to do now?"

At this, the boy hesitated. "I understand that the Empire of Sol will take in people from different nationalities."

Magavero's eyebrows rose a little at this. What was the kid driving at? "Yes, we do."

"Does Ascalon accept such people into their military?"

Since each city-state in the Empire of Sol had slightly different rules and policies on how they dealt with their military, Magavero could see how it would be a valid question…or he could have, if it hadn't come from an eleven year old Q'atalian. "Look, maybe I'm jumping to some conclusions here," he said slowly, eyes narrowing, "but are you suggesting that you want to join the military?"

There was a single, affirmative nod.

Magavero reached up and rubbed his chin thoughtfully, a subtle way of picking his jaw up off the floor before he could catch any flies in his open mouth. "Killing in self-defense is one thing, but surely you don't want to actually join the military and become a soldier. I mean, there are other professions you would excel at, surely—"

De Xiaolang shook his head firmly, cutting the captain off. "I could not stand by and watch people be hurt before. I won't be able to do it in the future. I want to protect people. The military will teach me how to do that."

He couldn't fault him on his determination, that was for sure. Magavero eyed the kid thoughtfully. Empire of Sol was built on the back of its city-states, and most of those city-states were militaristic in nature. That being said, drafting an eleven year old into the military was a little much, even for them.

The captain hesitated, deliberating on the right course of action. To buy himself time to think he asked, "What is your name?"

De Xiaolang nearly answered, but at the last moment hesitated. He was exiled. He had no right to claim his clan anymore. It felt like he were twisting his heart, but he omitted his clan name. "Xiaolang."

Magavero looked into that determined face, the eyes older than they should have been, and found that he couldn't deny the kid. "You'll train under me first," he stated firmly. "And if you still want to be in the military by the time that you get old enough to enlist, I won't stop you."

"I don't care how incredible the kid is, I'm not making any sixteen year old a captain!"

Capka sighed, wishing that he had been able to put this request for promotion to General Gibaldi instead of General Bellflower like he had wanted to. Gibaldi was much more open-minded about things. "Sir, respectfully, no one else in Ascalon can touch his scores, and he has the highest rate of success in the
Empire
. He is the best at intelligence, infiltration, and leadership. I've personally sparred with him and I lasted about fifteen seconds. He is the
best we have
. In all reality, we should have promoted him to captain last year." And they probably would have, if the administration hadn't strongly suggested that letting Xiaolang mature for another year was a good idea.

"He's too young for this sort of responsibility."

"No sir, he's not," Capka disagreed with the strongest tone that he dared against a superior officer. "He's been team leader for the past year, and has excelled at it. I actually have a waiting list of men that want to be on his team that's longer than my arm."

Bellflower blinked at this. A waiting list to be on someone's team? That was…well, it was highly unusual, that was for certain! He hummed thoughtfully and settled his bulk more comfortably in his chair. "Capka, I'm just not comfortable giving someone that young such power."

"Then assign him a very strong, mature second in command," Capka suggested readily. He started silently praying that the general would see his viewpoint on this. "It would balance out his youth, but still give him the promotion that he deserves."

Bellflower hummed again, in a rather noncommittal tone. Capka was left to wait on pins and needles for long, agonizing minutes as the general thought it over.

"Give Xiaolang a permanent team of experienced people, and I'll promote him to captain."

Capka was a veteran colonel of Ascalon, a true son of the Empire of Sol, so he didn't grin like a loon as he wanted to…but it was a very near thing. "Yes sir!"

Capka froze half out of his chair. He was suddenly afraid that this was too easy, and the general was about to add some sort of outlandish clause. "Yes sir?"

"I
won't
promote the boy to major before he hits twenty, no matter how much you might plead or bargain with me, is that clear?"

A grin broke out over Capka's face. "Perfectly, sir."