Read Making Hope Happen: Create the Future You Want for Yourself and Others Online

Making Hope Happen: Create the Future You Want for Yourself and Others

BOOK: Making Hope Happen: Create the Future You Want for Yourself and Others
>>DOWNLOAD HERE >>READ ONLINE NOW
ads 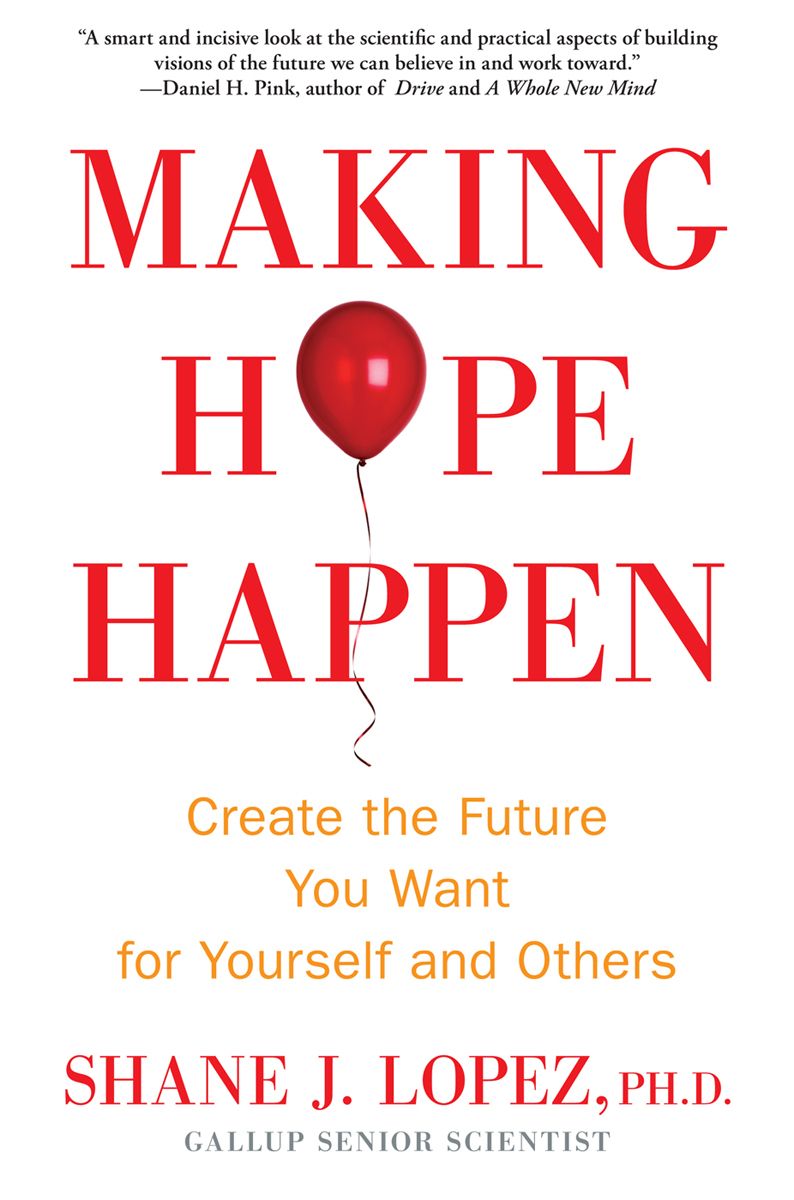 “In
Making Hope Happen,
Shane Lopez shares inspiring and compelling stories of real people—parents, educators, entrepreneurs, youth and seniors, citizens and leaders—whose lives are transformed through hope, and how this transforms the lives of others.”

“The world’s leading expert on the psychology of hope shows us people who have succeeded because they had hope, and how we can create hope in our own lives to help ourselves and our world.”

THINKING ABOUT THE FUTURE

Chapter 1: What the Man with No Future Taught Me About Hope

Chapter 5: How Investing in the Future Pays Off Today

Chapter 6: The Future Is Ours to See

Chapter 7: The Present Is Not What Limits Us

Chapter 8: The Past is Not a Preview

CREATING A NETWORK OF HOPE

Chapter 13: Teaching Hope to the Next Generation

To the woman who makes my life beautiful.

Alli, you say you were my first hope student,

but I think I was yours.

In memory of Rick.

I interpreted your promise of a lifetime

of mentoring to mean my lifetime.

All of the stories in this book are true. Names, personal characteristics, and settings have been changed to protect the privacy of clients, students, friends, family members, acquaintances. (When first and last names are used, identities have not been altered.) Any resulting resemblance to other persons, living or dead, is coincidental and unintentional.

THINKING ABOUT THE FUTURE
Chapter 1

What the Man with No Future Taught Me About Hope

I
T WAS
the fall of 1997 and I was starting my final year of clinical training at the Eisenhower VA Medical Center in Leavenworth, Kansas, trying to get good at using psychotherapy to treat depression in veterans of all ages. My primary rotation was in the Mental Health Clinic.

The clinic itself was cast in the image of its director, an old-school military psychiatrist named Dr. Theodore McNutt. McNutt’s white coat was a bit yellowed, but perfectly pressed with lots of starch, and he walked with a posture that suggested his clothes could crack at any moment. During my time in the clinic, Dr. McNutt had thrown me several softballs. Most of the veterans he had sent my way had needed little more than someone to talk to plus a few new techniques for managing sadness and stress. McNutt had a way of making me feel like a part of the treatment team without overwhelming me.

One morning, I heard McNutt’s black wingtips coming purposefully down the corridor. He walked right into my office, looking very
serious and dispensing with his typical formalities, and sat in the chair reserved for patients.

“There’s a man in the lobby who just got some bad news. He needs someone to talk to.” So far, it was a typical McNutt referral—a guy needing some support and a little bit of cognitive therapy. “There’s more. He is acutely suicidal. He said he’ll shoot himself as soon as he gets home. I’d rather not hospitalize him. It’s just not a good option for this veteran. The inpatient psychiatric ward would scare the hell out of him—you know what inpatient is like—and probably make him more desperate. So he has to go home today, but he can’t be a threat to himself. I will go get him.”

Go get him? What? Now? Wait!
Dr. McNutt had no time for questions and had already turned on his heels and was double-timing it to his office.

The vet who had just received the bad news was John, a full-bodied sixty-three-year-old veteran of the Korean War who had spent his life both before and after his years of military service in the cornfields of Kansas. Dr. McNutt escorted him and Paula, John’s wife, a short, sturdy woman with tired eyes, into my office. John sat silent and stared at the floor while the three of us quickly recapped the day’s events. Pragmatic from his silver flattop to his brown cowboy boots, John had never before seen a psychiatrist or a psychologist; he had never needed to.

But early that morning, John had come to the hospital complaining of fatigue and high blood pressure. He’d seen the physician, taken a bunch of tests, and then waited for the results, thinking he would just have to up his blood pressure medication. He merely wanted the new script and his discharge papers. He was ready to go back to work.

After reviewing John’s test results, however, the young VA doc had an unexpected diagnosis that he had to give John. He tried the “bad news, good news” approach: “John, the bad news is that your kidneys are failing. The good news is that you can live a relatively normal life with the help of dialysis.”

Paula said that John had handled this revelation well, initially—
until the physician had described the treatment regimen. “The closest dialysis center is about an hour and a half away from you. You will need to go there three times a week. Plan on being there mid-morning. You can be done by lunch, and you’ll have the afternoon to rest.”

That’s when John started to lose it, Paula said. His first question was “Doc, how will I run my farm?” The doctor groped for an answer and came back with his own question: “Can someone else do it for you?”

To John, the diagnosis plus dialysis equaled a death sentence . . . for his farm. The internist made it clear that John could not run the farm while on dialysis, so that treatment option did not make sense. But not getting treated would also leave him too sick to work his fields.

So John was trapped:

Get kidney treatment, lose the farm.

Don’t get treatment, lose the farm.

John saw himself as a man with no future.

When John said the word
suicide
out loud, the internist sent him and Paula straight to the Mental Health Clinic. By the time they were shuttled over, John had mapped out a plan. He was going home to shoot himself. “I want to die. I will kill myself,” he said. And we all believed that he would.

A strong John Wayne type, he seemed like someone who would never give up. In fact, there was nothing in John’s past that suggested he would react this way. He was a survivor—he had already made it through a war, a big recession that hit his farm hard, and the summer floods of 1993, which turned his fields into a giant lake. For decades, nothing could knock this man down. But now, as he faced the idea of losing his beloved farm and the future he had worked for his entire life, John had given up on living.

When the full story was told in my office, Dr. McNutt said, “John, you are going home tonight. Shane here will see that you are safe.” McNutt patted me on the back extra hard and walked out of the room.

Not Safe After Dark by Peter Robinson
The Catnapping Mystery by David A. Adler
A Hope in the Unseen by Ron Suskind
Seven Days: A young black woman makes a deal with a mob boss. by Diana Hoffman
Soldiers of Paradise by Paul Park
Redemption (A Joe Burgess Mystery, Book 3) by Kate Flora
Capture (Restless Motorcycle Club Romance) by Julia Marie
Soulmates Dissipate by Mary B. Morrison
Valour's Choice by Tanya Huff
Three-Way Games by Dragon, Cheryl
Our partner