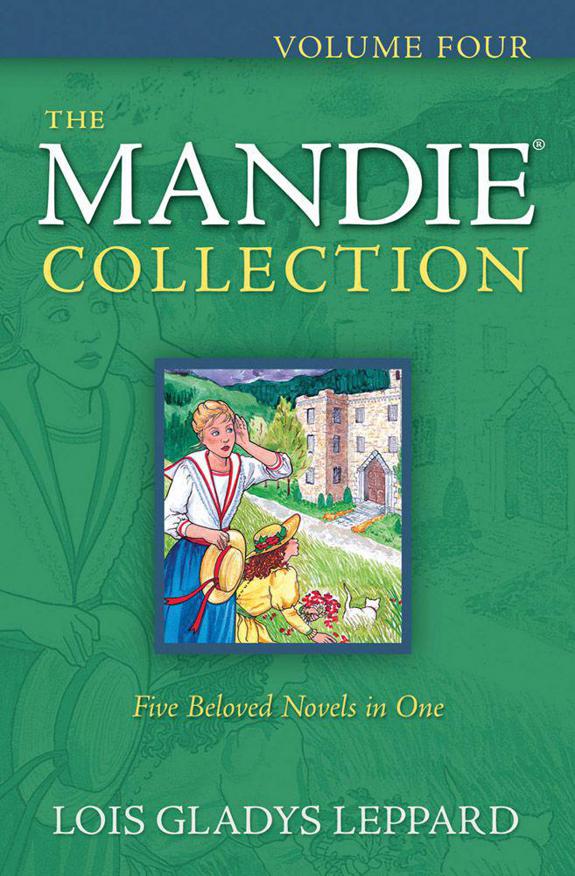 MANDIE® and SNOWBALL® are registered trademarks of Lois Gladys Leppard

This book has got to be for
Andy Unseth,
who “bears all” without a complaint.

MANDIE AND THE SILENT CATACOMBS

Chapter   6   Trouble in the Catacombs

Mandie Shaw was quickly scanning the people in the train station in Paris, France, when her grandmother called to her.

“Amanda! Come on!” Mrs. Taft spoke sharply. “Senator Morton has our tickets, and we don’t want to get separated in this crowd. Hurry up.”

“I’m sorry, Grandmother,” Mandie quickly replied. She hastened to join her friends, Celia Hamilton and Jonathan Guyer, who were trying to keep up with Mrs. Taft and Senator Morton.

Jonathan glanced at Mandie and laughed.
“Feel
someone watching us? Just how does one accomplish that?”

“It’s an instinct, I suppose,” Mandie replied, holding on to her white kitten, Snowball, as she walked along with her friends. “Maybe it’s because I’m part Cherokee that I have that—what would you call it—the ability to feel someone watching. Anyway, this isn’t the first time I’ve had that feeling over the years.”

“All thirteen of your years?” Jonathan teased.

“Well, you aren’t much older than I am, Jonathan Guyer,” Mandie reminded him. “In fact you were only fourteen in January this year.”

“You did?” Mandie replied. She turned back to Jonathan. “Then I was right. There was someone watching us. And you’d better believe us, Jonathan, and help us look out for whoever it was.”

“All right, all right,” Jonathan told her as they approached the platform where the hissing train was waiting.

They followed the adults up the two steps and into the passenger car. “This sure is a long train, and it looks so big, compared with ours back in North Carolina,” Mandie commented as they continued on into a compartment.

Mrs. Taft and the senator sat down and motioned for the young people to sit on the long seat across from them.

“The inside is different, too,” Celia agreed. “We don’t have compartments like this in our trains at home in Virginia.” Celia was Mandie’s roommate at the private school they attended in Asheville, North Carolina.

“Grandmother, will this train take us all the way to Rome, Italy?” Mandie asked, rubbing Snowball’s head as he squirmed in her lap.

“No, dear,” Mrs. Taft replied. “This train will only go to the border and there we’ll board the Italian express train for the rest of the trip.”

“Just think. We’re going into another country on a train,” Mandie said. “We left the United States on a ship, and when we got to London, we took a ferry boat across the English Channel to France, and now we’re traveling on a train.” Mandie and Celia were on a tour of Europe in the summer of 1901 with Mandie’s grandmother and Senator Morton, a family friend.

“Don’t forget your journals, girls,” Senator Morton reminded them. “You should write things down as they happen, before the freshness wears off.”

“Yes, sir,” Mandie agreed. “I hate to tell you this, but my journal is packed in my luggage, and I can’t get to it right now. But I will keep it out from now on as we travel.”

“Mine is, too,” Celia added. “Mandie, if we each had a bag to put them in, they would be easier to handle, especially for you since you have your cat.”

Jonathan spoke up. “I know just what you girls need,” he said. “As soon as we get to Rome, I’ll show you. There are shops in Italy that sell mesh bags that fold up and fit in your purse, or they will stretch out to carry things this big.” He held his hands about a foot apart.

“Jonathan, I’m so glad we found you on the ship,” Mandie told him. “You are such an experienced traveler. You seem to know everything. Have you gone to school in Italy, too?”

“Oh, no, not Italy,” Jonathan replied, flashing his mischievous smile. “But I have traveled some in Italy. And before you ask me, I do not speak Italian, only French and English.”

Mandie and Celia had found Jonathan on the ship they had taken from the United States to England. Although Jonathan had an aunt and uncle in Paris, where he was supposed to stay until his father came for him, Senator Morton had been unable to contact the relatives, who were out of town.

Senator Morton did get in touch with Jonathan’s father, a wealthy businessman in New York, who had asked the senator to keep Jonathan with him as they traveled.

“I guess we’re out of luck, then, unless my grandmother or the senator can speak Italian,” Mandie said, looking across the aisle at the adults.

Mrs. Taft shook her head. “No, dear, I don’t speak Italian except for a few words. But most of the people there speak enough French, and some English, that we won’t have any trouble getting around.” She looked at the senator. “Perhaps you speak Italian, Senator Morton?”

“A little,” he admitted. “I’m not too good at it, but I can make myself understood sometimes. Actually, I can understand the Italians better than they can me.”

“Senator Morton, what about all those other countries we’re going to?” Mandie asked. “Switzerland, Germany, the Netherlands, Belgium, Scotland, Wales, Ireland—will you be able to translate for us when they don’t understand or speak English?”

“Don’t worry your pretty head about it, Miss Amanda. We’ll manage,” the senator assured her. “I’ve traveled quite a bit in Europe, and so has your grandmother. If the people don’t understand what we say, we can always use our hands. The Italians, especially, use a lot of hand motions when they speak.”

Suddenly the train whistle blasted, and the car jerked forward.

“Goodness!” Celia clutched the seat as the train began to speed down the track.

Mandie laughed. “You said this ride would be different, and it is,” she said over the roar of the rattling, whistling train. “As fast as this thing is going, we should be there soon.”

Jonathan smiled and nodded. “Soon, I suppose, but it’s an awfully long trip—hours and hours.”

The girls had never been on an express train before. The only ones they had ridden were the slow-moving ones up and down the eastern seaboard in the United States. They went slow enough for a person to take in the scenery along the way. This train went so fast it was impossible to enjoy the view. The telegraph poles along the way seemed to fly by too rapidly to even be counted.

The train was noisy, too, with all the rattle and roar of the speeding wheels. It was impossible to carry on a conversation without shouting at each other.

Many hours later, when the train finally came to a screeching halt at the border to Italy, the young people, dozing in their seats, were caught unawares. As it bumped to a stop in the depot they were thrown together. They all laughed.

“Whew!” Mandie breathed with a loud gasp. “I’m sure glad that’s over and done with.” She clutched Snowball, who was also frightened by the sudden stop.

Mrs. Taft and the senator were sitting in separate seats with arms on each side of them and they looked at the young people and laughed.

“I should have warned you,” Mrs. Taft said. “When you sit on that long bench-type seat there’s nothing to hold on to.”

“We’ll warn you next time,” the senator told them as they all got up.

Mandie eagerly looked out the window. All she could see was the depot platform, as she and her friends followed the adults down the aisle to the train steps, carrying their bags.

“We must hurry,” the senator urged them down the steps. “I believe that’s our train there on the next track.” He indicated a long black train that sat huffing and puffing and faced in the direction they were going.

As they boarded the train to go into Italy, the conductor stood at the entrance checking papers and tickets. The adults showed him whatever he needed to see as the young people waited and watched. The man kept chattering away in what Jonathan said was Italian.

Handing the papers back to Senator Morton, the man smiled and said, “
Da questa parte
,” as he indicated with his hand that they should board the train.

Mandie climbed the few steps behind the adults, then turned and smiled at the man and said, “Thank you.”

The man burst into a big smile, bowed slightly and said, “
Grazie
.” Then he added in English, “Thank you. Welcome to
Italia
.”

Mandie was so thrilled with having conversed with a real Italian that Celia had to push her to go ahead.

“He understood English,” Mandie said excitedly as she followed the others through the train car and into a compartment. This one was larger and much fancier than the one on the French railway. And Mandie noticed the seats had arm rests. They wouldn’t be thrown around on this train because they’d have something to hold on to.

“I do hope we can see some of the countryside this time,” Celia remarked, as they sat down.

“You’d better plan on seeing the countryside from somewhere besides a train,” Jonathan told her, laughing.

“Do you mean we’re going for another fast train ride?” Mandie asked, uneasily holding on to Snowball.

“I’d say faster. You see, this is the main express,” Jonathan said.

“How could it go any faster than the one we were on?” Celia gasped.

“Trust me and get prepared because it can,” Jonathan warned.

“Well, I’m glad we still have civilized trains back home,” Mandie remarked as she looked out the window and saw the train they had been on being readied to return to Paris. “Look what they’re doing.” She pointed.