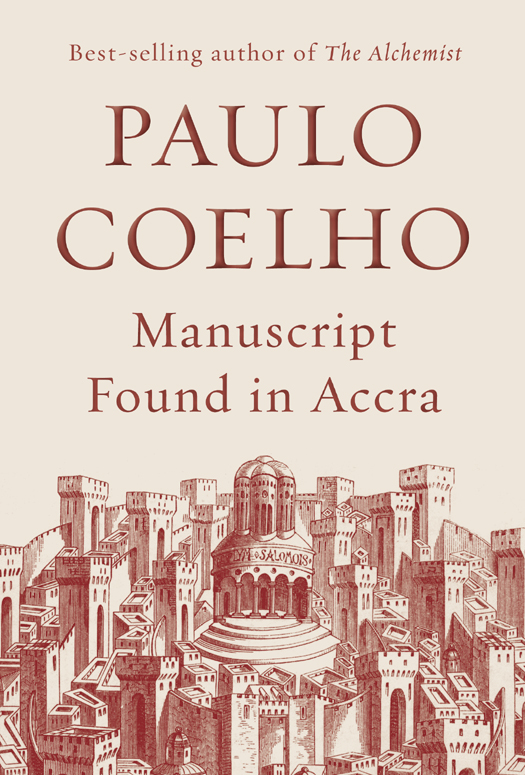 All rights reserved. Published in the United States by Alfred A. Knopf, a division of Random House, Inc., New York, and in Canada by Random House of Canada Limited, Toronto.

O Mary, conceived without sin,
pray for those who turn to You. Amen
.

For N.R.S.M.,
in gratitude for the miracle

Daughters of Jerusalem, weep not for me,
but weep for yourselves, and for your children
.

In December of 1945, two brothers looking for a place
to rest found an urn full of papyruses in a cave in the region of Hamra Dom, in Upper Egypt. Instead of telling the local authorities—as the law demanded—they decided to sell them singly in the market for antiquities, thus avoiding attracting the government’s attention. The boys’ mother, fearing “negative energies,” burned several of the newly discovered papyruses.

The following year, for reasons history does not record, the brothers quarreled. Attributing this quarrel to those supposed “negative energies,” the mother handed over the manuscripts to a priest, who sold one of them to the Coptic Museum in Cairo. There, the papyruses were given the name they still bear to this day: manuscripts from Nag Hammadi (a reference to the town nearest to the caves where they were found). One of the
museum’s experts, the religious historian Jean Doresse, realized the importance of the discovery and mentioned it for the first time in a publication dated 1948.

The other papyruses began to appear on the black market. The Egyptian government tried to prevent the manuscripts from leaving the country. After the 1952 revolution, most of the material was handed over to the Coptic Museum in Cairo and declared part of the national heritage. Only one text eluded them, and this turned up in an antiquarian shop in Belgium. After vain attempts to sell it in New York and Paris, it was finally acquired by the Carl Jung Institute in 1951. On the death of the famous psychoanalyst, the papyrus, now known as Jung Codex, returned to Cairo, where the almost one thousand pages and fragments of the manuscripts from Nag Hammadi are now to be found.

The papyruses
are Greek translations of texts written between the end of the first century BC and AD 180, and they constitute a body of work also known as the Apocryphal Gospels because they are not included in the Bible as we know it today. Now, why is that?

In AD 170, a group of bishops met to decide which
texts would form part of the New Testament. The criterion was simple enough: anything that could be used to combat the heresies and doctrinal divisions of the age would be included. The four gospels we know today were chosen, as were the letters from the apostles and whatever else was judged to be, shall we say, “coherent” with what the bishops believed to be the main tenet of Christianity. Reference to this meeting of the bishops and their list of authorized books can be found in the Muratorian Canon. The other books, like those found in Nag Hammadi, were omitted either because they were written by women (for example, the Gospel according to Mary Magdalene) or because they depicted a Jesus who was aware of his divine mission and whose passage through death would, therefore, be less drawn out and painful.

In 1974
, the English archaeologist Sir Walter Wilkinson discovered another manuscript, this time written in three languages: Arabic, Hebrew, and Latin. Conscious of the laws protecting such finds in the region, he sent the text to the Department of Antiquities in the Museum of Cairo. Shortly afterward, back came a response: there
were at least 155 copies of the document circulating in the world (three of which belonged to the museum), and they were all practically identical. Carbon-14 tests (used to determine the age of organic matter) revealed that the document was relatively recent, possibly as late as AD 1307. It was easy enough to trace its origin to the city of Accra, outside Egyptian territory. There were, therefore, no restrictions on its removal from the country, and Sir Walter received written permission from the Egyptian government (Ref. 1901/317/IFP-75, dated 23 November 1974) to take it back to England with him.

I met
Sir Walter’s son in 1982, at Christmas, in Porthmadog in Wales. I remember him mentioning the manuscript discovered by his father, but neither of us gave much importance to the matter. We maintained a cordial relationship over the years and met on at least two other occasions when I visited Wales to promote my books.

On 30 November 2011, I received a copy of the text that he had mentioned at that first meeting. I transcribe it here.

“Now that I am at the end of my life, I leave for those who come after me everything that I learned while I walked the face of this Earth. May they make good use of it.”

Troll Mountain: The Complete Novel by Matthew Reilly
Catnapped! by Elaine Viets
Kylee's Story by Malone, A.
Luck of the Draw (Xanth) by Piers Anthony
The Orphan Uprising (The Orphan Trilogy, #3) by Morcan, James, Morcan, Lance
Home Fires by Barbara Delinsky
Rifts by Nicole Hamlett
My Anchor (Trio Series Book 1) by Blood, Joy
The Accidental Feminist: How Elizabeth Taylor Raised Our Consciousness and We Were Too Distracted by Her Beauty to Notice by M. G. Lord
A Season of Hope by Caldwell, Christi
Our partner