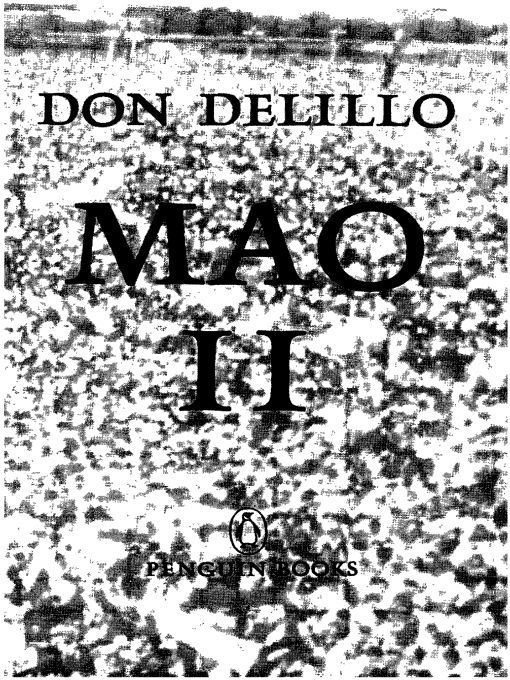 Table of Contents
Title Page
Copyright Page
Dedication
PART ONE
Chapter 1
Chapter 2
Chapter 3
Chapter 4
Chapter 5
Chapter 6
Chapter 7
PART TWO
Chapter 8
Chapter 9
Chapter 10
Chapter 11
Chapter 12
Chapter 13
Chapter 14
IN BEIRUT
FOR THE BEST IN PAPERBACKS, LOOK FOR THE
FOR THE BEST IN PAPERBACKS, LOOK FOR THE
“
Mao II
triumphs ...
DeLillo’s gifts—terse, electric dialogue, descriptive passages of insidious beauty—have never been more apparent or put to better use.”—
Time
“Don DeLillo is as remarkable as anyone alive and writing fiction in our time.”—
Houston Chronicle
“DeLillo’s brilliant 10th novel ... writing so piercingly exact, characters so palpable, dialogue so shimmering, that the ideas burn off like summer smoke and become skywriting.”
—
The Philadelphia Inquirer
“Reading
Mao II
is like listening to a fine mind exploring its own murky depths.”—
St. Louis Post Dispatch
“One of our most distinctive, and indispensable writers.”
—
The Boston Phoenix
“DeLillo’s gunfire prose sets you on edge, waiting for the next word-bullet to the brain.”—
The San Diego Tribune
“One of the most frighteningly lucid and original minds in contemporary American fiction.”—
The Miami Herald
“Reading Don DeLillo is the literary equivalent of experiencing a fast-moving evening thunderstorm. If you’re willing to be challenged, Mr. DeLillo will give you more than your money’s worth.”
—
Atlanta Journal
“With DeLillo we are in the hands of a master.”
—
New York Newsday
“A taut, intense novel of ideas that pack the menacing warning of a cocked trigger ... DeLillo’s themes are firmly rooted in spare, graphic prose and a gripping narrative.”
—
Virginian Pilot
&
Star Ledger
“Another remarkable achievement.
Mao II
reconfirms DeLillo’s status as a modern master and literary provocateur.”
—Publishers Weekly
“A beautifully readable, haunting tale that jolts along at its own unsettling, disjunctive pace.”—
San Francisco Chronicle
“DeLillo’s words, by virtue of their arranger’s consummate skill, are a pleasure to read.”—
Arizona Daily Star
“A riveting novel of ideas ... Some of DeLilla’s most penetrating insights into the relationship between fiction and current events.”
—
The San Diego Union
“Mr. DeLillo is the preeminent novelist of the political nightmare ... A spellbinding writer.”—
The Wall Street Journal
“A luminous book, full of anger deflected into irony, with moments of hard-earned transcendence.”
—Kirkus Reviews
“This is Don DeLillo at his best, on the verge of identifying the ineffable, of capturing the essence of what has been a vague suspicion, of fashioning sentences that themselves seem to contain multitudes.”—
The Detroit News
“Open-ended, resonant, and challenging.”
—
Details
“His concepts, his thoughts on the relationship between art and terror, are brilliant and original.”—
Los Angeles Reader
“A splendidly written, unnerving book. Quick sentences and brisk dialogue ... Just a tremendous book.”
—Indianapolis Star
“A riveting study of the individual and the mob.”
—
Detroit Free Press
“One of the most original, intelligent, and visionary novelists now writing in America.
Mao II
contains a series of extraordinary images presented with a complex intensity that no photograph or Warhol silk-screen, or even a film sequence could achieve.”
—
The New York Review of Books
“Mao II
digs deep into themes, with intelligence and insight. The plot roars with force and intent. DeLillo has a gift for capturing dialogue that is a constant revelation.... DeLillo also captures the condition of late-20th-Century culture better than anyone else writing today.”
—Baltimore City Paper
“Don DeLillo is one of the truly enigmatic figures in modern American letters.”—
San Francisco Review of Books
“A dark satire on the manipulation of images by artists, terrorists and news hounds ... he creates scenes of memorable and disturbing clarity.”—
Newsweek
“A funny, fierce novel. For new readers, it’s a perfect introduction to his nervy storytelling. For eager fans, it’s a potent distillation of his themes.”—
Boston Sunday Herald
“DeLillo has staked a claim in the mineral heart of postmodern lit. A Lone Ranger, he fires his perceptions like a beltload of silver bullets.
His novels are guaranteed I.Q. boosters.”
—Vanity Fair
“A consummate craftsman, DeLillo’s prose has a mesmerizing quality, and his elliptical way with dialogue is superb as always.”
—The San Diego Union
PENGUIN BOOKS
MAO II
Don DeLilio published his first short story when he was twenty-three years old. He has since written thirteen novels, including
White Noise
(1985), which won the National Book Award. It was followed by
Libra
(1988), his bestselling novel about the assassination of President Kennedy;
Mao II
(1991), which won the PEN/Faulkner Award for Fiction; and the bestselling
Underworld
(1997), which in 2000 won the Howells Medal of the American Academy of Arts and Letters for the most distinguished work of fiction published in the prior five years. Other novels include
Americana,
End Zone, and
Great Jones
Street, all available from Penguin. His most recent novel is
Cosmopolis.
In 1999, DeLillo was awarded the Jerusalem Prize, given to a writer whose work expresses the theme of freedom of the individual in society; he was the first American author to receive it. 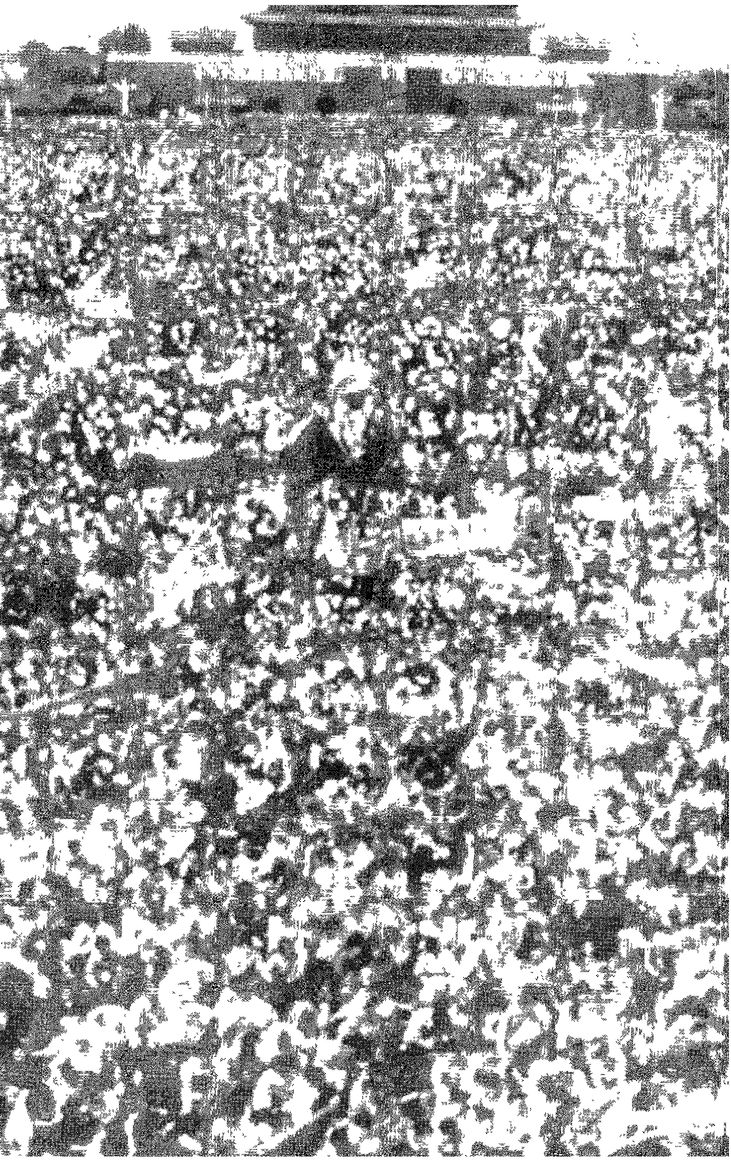 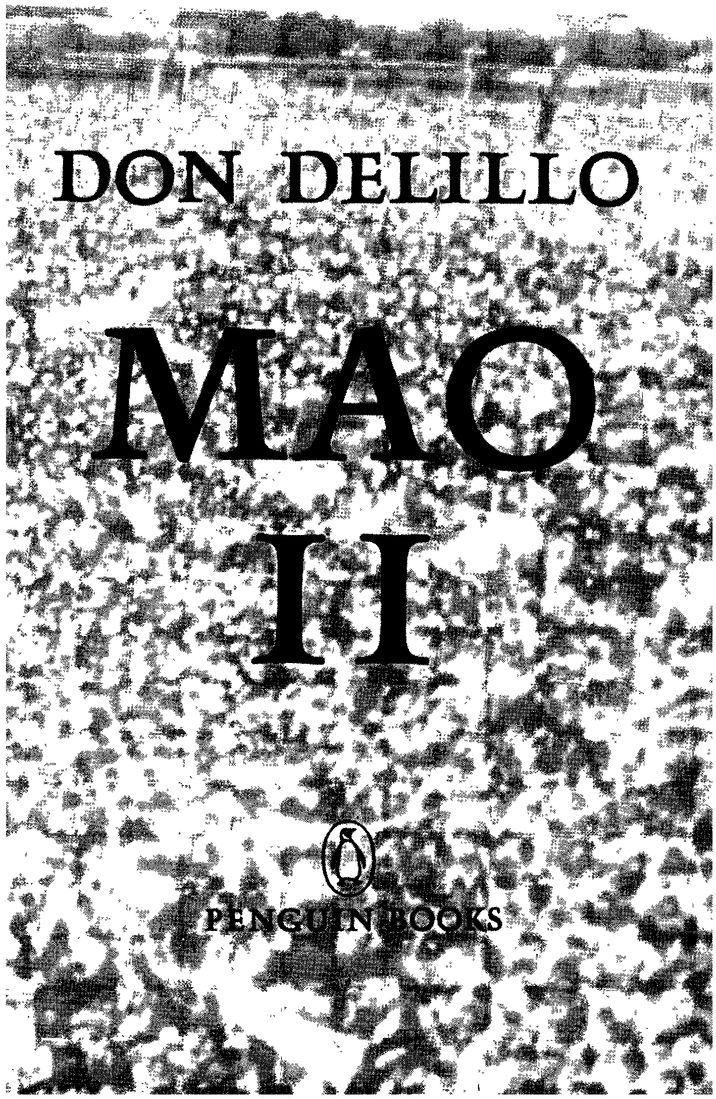 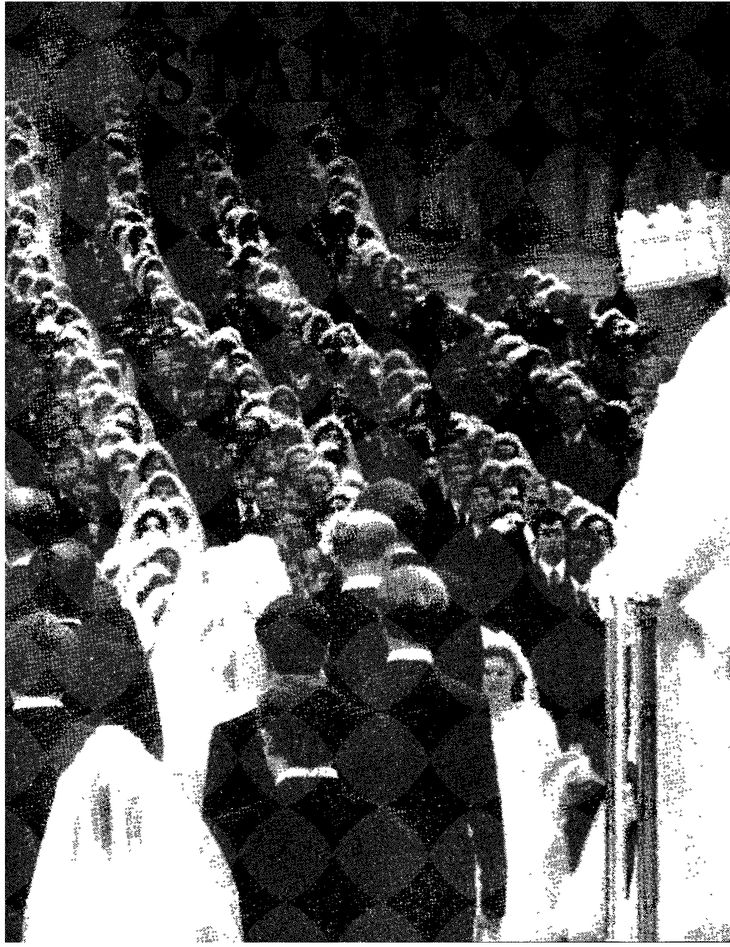 Here they come, marching into American sunlight. They are grouped in twos, eternal boy-girl, stepping out of the runway beyond the fence in left-center field. The music draws them across the grass, dozens, hundreds, already too many to count. They assemble themselves so tightly, crossing the vast arc of the outfield, that the effect is one of transformation. From a series of linked couples they become one continuous wave, larger all the time, covering the open spaces in navy and white.
Karen’s daddy, watching from the grandstand, can’t help thinking this is the point. They’re one body now, an undifferentiated mass, and this makes him uneasy. He focuses his binoculars on a young woman, another, still another. So many columns set so closely. He has never seen anything like this or ever imagined it could happen. He hasn’t come here for the spectacle but it is starting to astonish him. They’re in the thousands now, approaching division strength, and the old seemly tear-jerk music begins to sound sardonic. Wife Maureen is sitting next to him. She is bold and bright today, wearing candy colors to offset the damp she feels in her heart. Rodge understands completely. They had almost no warning. Grabbed a flight, got a hotel, took the subway, passed through the metal detector and here they are, trying to comprehend. Rodge is not unequipped for the rude turns of normal fraught experience. He’s got a degree and a business and a tax attorney and a cardiologist and a mutual fund and whole life and major medical. But do the assurances always apply? There is a strangeness down there that he never thought he’d see in a ballpark. They take a time-honored event and repeat it, repeat it, repeat it until something new enters the world.