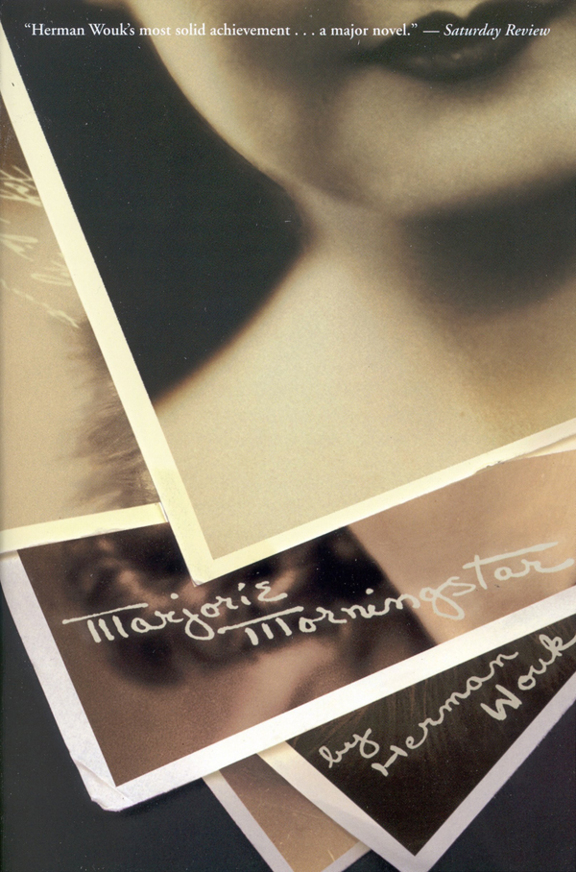 A starry-eyed young beauty, Marjorie Morgenstern is nineteen years old when she leaves New York to accept the job of her dreams-working in a summer-stock company for Noel Airman, its talented and intensely charismatic director. Released from the social constraints of her traditional Jewish family, and thrown into the glorious, colorful world of theater, Marjorie finds herself entangled in a powerful affair with the man destined to become the greatest-and the most destructive-love of her life.

Rich with humor and poignancy,
Marjorie Morningstar
is a classic love story, one that spans two continents and two decades in the life of its heroine. This unforgettable paean to youthful love and the bittersweet sorrow of a first heartbreak endures as one of Herman Wouk's most beloved creations.

Customs of courtship vary greatly in different times and places, but the way the thing
happens to be done here and now always seems the only natural way to do it.

Marjorie’s mother looked in on her sleeping daughter at half past ten of a Sunday
morning with feelings of puzzlement and dread. She disapproved of everything she saw.
She disapproved of the expensive black silk evening dress crumpled on a chair, the
pink frothy underwear thrown on top of the dress, the stockings like dead snakes on
the floor, the brown wilting gardenias on the desk. Above all she disapproved of the
beautiful seventeen-year-old girl lying happily asleep on a costly oversize bed in
a square of golden sunlight, her hair a disordered brown mass of curls, her red mouth
streaked with cracking purplish paint, her breathing peaceful and regular through
her fine little nose. Marjorie was recovering from a college dance. She looked sweetly
innocent asleep; but her mother feared that this picture was deceptive, remembering
drunken male laughter in the foyer at 3 A.M., and subdued girlish giggles, and tiptoeing
noises past her bedroom. Marjorie’s mother did not get much sleep when her daughter
went to a college dance. But she had no thought of trying to stop her; it was the
way boys met girls nowadays. College dances had formed no part of the courtship manners
of her own girlhood, but she tried to move with the times. She sighed, took the dying
flowers to try to preserve them in the refrigerator, and went out, softly closing
the door.

The slight noise woke Marjorie. She opened large blue-gray eyes, rolled her head to
glance at the window, then sat up eagerly. The day was brilliantly clear and fine.
She jumped from the bed in her white nightgown, and ran to the window and looked out.

It was one of the many charms of the El Dorado that it faced Central Park. Here on
the seventeenth floor there was no one to peer in on her nakedness but the birds of
the air. This fact, even more than the spacious view of the green park and the skyscrapers,
gave Marjorie a sense of luxury each day when she awoke. She had enjoyed this freedom
from prying eyes for less than a year. Marjorie loved everything about the El Dorado,
even the name. “El Dorado” was perfectly suited to an apartment building on Central
Park West. It had a fine foreign sound to it. There were two categories of foreignness
in Marjorie’s outlook: high foreign, like French restaurants, British riding clothes,
and the name El Dorado; and low foreign, like her parents. By moving to the El Dorado
on Central Park West her parents had done much, Marjorie believed, to make up for
their immigrant origin. She was grateful to them for this, and proud of them.

What a wonderful day it was for horseback riding! The warm breeze smelled of new grass,
here seventeen floors above the murmuring auto traffic. The sky was bright blue, with
little white tufts of cloud, and the green park was tufted with white too where cherry
trees were blossoming. She felt unbelievably good as recollections of last night came
back to her. She hugged herself with pleasure, crossing her arms and clutching her
bare pretty shoulders with her hands.

Her dreams of the gawky days of thirteen and fourteen had come true, and more than
true. Four years ago she had scampered and squealed with other skinny dirty little
girls in the playgrounds of Bronx public schools. Last night she had walked on the
moonlit grounds of Columbia College. She had faintly heard the young men who lived
in the dormitories shouting and laughing, a wonderful rich male noise. She had danced
in a wood-panelled hall decorated with colored lanterns and great blue flags, and
sometimes she had been only inches away from the smiling band leader, a famous man.
She had danced with dozens of boys. Even when the band was resting a victrola had
played, and there had been more boys to dance with her to the thin scratchy music.
One of them, the son of the owner of a great department store, was going to ride with
her today in Central Park.

She picked the black dress off the chair and smoothed it gratefully. It had done its
work well. Other girls had floundered through the dance in wretched tulles and flounces
and taffetas, like the dresses her mother had tried for two weeks to buy for the great
occasion. But she had fought for this tube of curving black crepe silk, high-necked
enough to seem demure, and had won; and she had captivated the son of a millionaire.
That was how much her mother knew about clothes.

There was a rap at the door. “Marjorie, are you up?”

“Just getting into the shower, Mom.” She darted into the bathroom and turned on a
drumming rush of hot water. Sometimes her mother came in and shouted questions at
her through the shower curtain, but she didn’t today. Marjorie returned to the bedroom
and waited for a moment, watching the doorknob. Then she walked to the full-length
mirror on the closet door, and draped the black dress against her bosom, pleased by
the contrast it made with her naked shoulders and tumbling hair.

At this moment—it was quite an important moment in her life—she grew hot, and prickled
all over. An intuition about her future came flooding into her mind, like sunlight
at the drawing of a curtain. She was going to be an actress! This pretty girl in the
mirror was destined to be an actress, nothing else.

Since entering Hunter College in February of the previous year, Marjorie had been
taking a course of study leading to a license as a biology teacher; but she had long
suspected that she was going through empty motions, that chalk and blackboard weren’t
for her. Nor had she been able to picture herself settling into dull marriage at twenty-one.
From her thirteenth year onward a peculiar destiny had been in her blood, waiting
for the proper time to crop out, and disturbing her with premonitory sensations. But
what she experienced on this May morning was no mere premonition; it was the truth
bursting through. She was going to be an actress! The daydreams of her childhood had
not been mere dreams, after all.

In the light of this truth—for it was not a resolve, not a decision, but rather a
sudden insight into an existing truth—all her life seemed to take shape. Puzzling
things were explained. Contradictions melted away.

This was why she had triumphed at Columbia last night, and this was why she had been
such a fish out of water all her life in the Bronx. This was why without effort she
had been the star of all the playlets at school and in summer camps. Even as a child
she had had a quick mind, a gift of mimicry, an excellent memory, and self-possessed
charm. Some instinct had taught her early to imitate the speech of her English teachers.
Long before her family moved to Manhattan she had been half mocked and half admired
in the highly critical society of the Bronx gutters, where her nickname had been Lady
Pieface. Now, in an amazingly short time, she had transformed herself into a Central
Park West charmer, the belle of a Columbia dance. She had sometimes wondered at her
own remarkable advance—her quick mastery of collegiate slang, her grace on the dance
floor, her polished charm of gesture, above all her unfailing run of bright talk,
which always sounded clever even when there was nothing in it. She knew that in truth
she was still very much Lady Pieface of the Bronx playing a hastily learned part.
But her performance had been getting better week by week; and last night she had scored
an unmistakable smash hit. The wonder of all this vanished, on the supposition that
she was an actress discovering her powers.

She dropped into the chair at her desk, letting the dress fall over her piled-up unfinished
homework. White steamy clouds from the shower, shot through with yellow bars of sunlight,
were filling the room. Marjorie kept staring at herself in the mirror through the
vapors, unmindful of the roaring waste of hot water. Had there ever been successful
Jewish actresses? Of course: Sarah Bernhardt, Rachel—and now that she thought of it,
rumor described half the great stars of Hollywood as Jewish.

But her name wasn’t good. It wasn’t good at all. There was wondrous resonance in
Sarah Bernhardt
, stark elegance in
Rachel
—whereas her own… Marjorie Morgenstern…

Then came the confirming flash, the white streak of revelation. Such a simple change!
Not even a change, a mere translation of the German compound, and her drab name turned
into an incantation, a name that could blaze and thunder on Broadway. She pushed aside
the dress, seized a pencil, threw open her biology notebook to a blank page, and hastily
printed.

She stared at the name, sprawled in dark blue ink over the light blue lines of the
page. She took a pen and carefully wrote, in the small, vertical hand which she was
trying to master,

For a long time she sat looking at the page. Then she wrote under the name

Vampire in Geek's Clothing (Psy-Vamp Book 6) by Cassandra Lawson
This Is Only a Test by B.J. Hollars
A Taste of Temptation (Love Spectrum Romance) by Alexis, Reneé
Zoe and the Tormented Tycoon by Kate Hewitt
A Scream in Soho by John G. Brandon
Fractured by Karin Slaughter
Weeping Willow by White, Ruth
But He Was Already Dead When I Got There by Barbara Paul
To Walk in the Sun (Wiggons' School for Elegant Young Ladies - Book 1) by Charles, Jane
Four Truths and a Lie by Lauren Barnholdt
Our partner