Read Mark of the Demon Online

Mark of the Demon 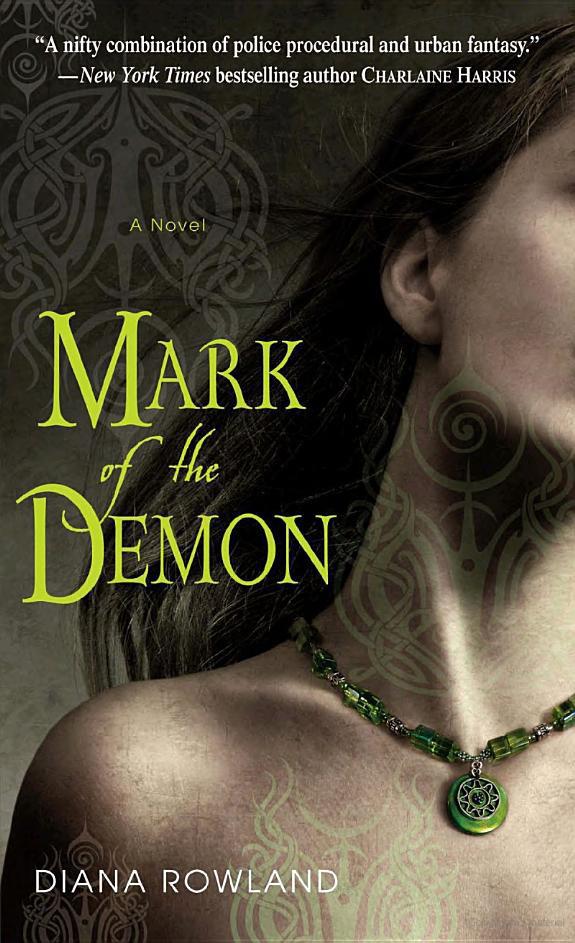 “Mark of the Demon
is a nifty combination of police procedural and urban fantasy. Not too many detectives summon demons in their basement for the fun of it, but Kara Gillian is not your average law enforcement officer. In the course of Rowland’s first book, Kara learns a lot about demons, her past, and above all, herself.”

“Rowland spins a tale that is riveting, suspenseful, and deliciously sexy. With a unique take on demons, and with one of the most terrifying serial killers ever,
Mark of the Demon
will keep you up late at night turning pages.”

—J
ENNA
B
LACK
, author of
Speak of the Devil

“Mark of the Demon
is a fascinating mixture of a hard-boiled police procedural and gritty, yet other-worldly, urban fantasy. Diana Rowland’s professional background as both a street cop and forensic assistant not only shows through but gives the book a realism sadly lacking in all too many urban fantasy ‘crime’ novels.”

“A well-woven supernatural procedural that keeps the pages turning, hooking you on both the characters and the crime.”

“Mark of the Demon
crosses police procedure with weird magic. Diana Rowland’s background makes her an expert in the former, and her writing convinces me she’s also an expert in the latter in this fast-paced story that ends with a bang.”

“An intriguing police procedural … which shouldn’t be surprising, in that Rowland is a former street cop as well as a former forensic specialist. It’s a strong book, not for the faint-hearted, but solid and engrossing.”

For Jack and Anna, my two favorite Demons

Since this is my first published novel, I feel I should thank everyone who helped me get this far. On the other hand, my publisher might get a bit testy about having to add an extra twenty pages just for the acknowledgments, so I’m going to have to cut it a bit short and hit the highlights.

Therefore, thanks go to:

My mother, Sue Rowland, for encouraging a love of science fiction, fantasy, and all things weird.

My sister, Sherry Rowland, for tolerating the weird little brat who shared her house, and for continuing to tolerate the weird, middle-aged broad who shares her life.

Kat Johnson, for introducing me to the demons.
Dak’nikahl lahn. Tah agahl lahn
.

Daniel Abraham, for helping me through several varieties of angst over the years, for continuing to believe in me despite my angst, and—most importantly—for telling me what was wrong with this book.

Dr. Michael DeFatta, for answering heaping scads of questions related to forensic pathology—far more than any one man should ever have to answer. Lots of questions. Seriously. Lots.

Lindsay Ribar, for pulling my manuscript out of the slush pile, for falling in love with it, and for being a completely awesome chick!

My agent, Matt Bialer, for agreeing with Lindsay, for being an absolute rock of support, and for finding my book a wonderful home.

My incredible copy editor, Kathy Lord, for taming my wild use of commas and the word “just,” and for keeping track of demons, victims, and phases of the moon far better than I was able to!

My editor’s assistant, David Pomerico, for patiently answering my many stupid questions.

And finally, my editor, Anne Groell, for not letting me get away with any degree of authorial laziness, for devoting incredible amounts of time and effort and patience, and for guiding me and goading me into making this book a thousand times better than I could have ever imagined.

I
COULD HEAR THE INTRUDER BREAKING INTO MY HOUSE
.

Unfortunately, it was in the same instant that the demon appeared before me.

The sound of shattering glass upstairs disrupted my focus for only a fraction of a second, but it was enough for the arcane portal to shift from my control and leap away from me like an untethered water hose. I made a frantic grasp at the portal, cold sweat breaking out under my arms as I struggled to wrench the power back into place. My heart slammed in my chest as I fought the uncontrolled energy, seizing each strand to bind and anchor it. My technique was raw and inelegant, but I didn’t give a crap. I was only interested in surviving, not in how pretty it looked.

It felt like an eternity, but it was merely several frenzied seconds before I had the wildly fluctuating potencies settled and calmed. I cautiously loosened my hold as I took several deep, ragged breaths, struggling to slow the mad galloping of my pulse. That had been
far
too close for my peace of mind. If that loss of focus had come just a few seconds earlier, I most likely would have been ripped apart—either by the maelstrom of the arcane portal I’d opened in the basement of my house or by the claws of the demon I’d just summoned through that portal.

I exhaled a shuddering breath, finally releasing my hold on the portal as I looked with no small amount of triumph at the massive demon on one knee before me, his head lowered and his wings tucked along his back. He had remained utterly still throughout my battle with the portal, and I silently thanked whatever powers existed that I had already sealed the terms with him before losing control. I could feel a grin spread across my face. I’d done it. I had summoned a
reyza
, the highest of the twelve levels of demons.

I was officially a full-fledged summoner.

The sharp
crack
of more glass breaking spoiled my reverie. My grin shifted to a scowl.
A burglar. Just great
. If I went upstairs to deal with the idiot, I would have to abandon my ulterior motive for summoning the demon. And summoning a
reyza
was worth more than a few wordly possessions. Besides, my wordly possessions weren’t worth very much.

But the demon snapped his head up at the sound. “Someone intrudes on your demesne,” he growled, deep voice resonating powerfully through the basement. Before I could take a breath to give a response or command, the demon bounded up the heavy wooden stairs of my basement, bursting through the door that exited into the main hallway of my house.

“Son of a bitch!” I swiftly anchored the potency that I hadn’t yet grounded.
Well, so much for that plan
. My legs shook as I staggered up the stairs after the demon, and I snarled at the fatigue that slowed me down. I was used to feeling somewhat drained after a summoning, but this was more than I’d expected.

I heard a panicked shriek coming from the front of my house and I took off in that direction, forcing my wobbly legs to move.
Okay, I managed to summon him. Now can I control him?
The shriek of terror abruptly spiraled upward as I lurched down the hall.

“Kehlirik! No harm!” I shouted, commanding the demon with my voice even as I exerted mental pressure on the arcane bindings.

I rounded the corner to the living room, panting for breath and grateful that my house was “cozy” instead of palatial. I wasn’t sure if I could have made it much farther without falling on my face. I made a quick mental note:
Get more rest before summoning a twelfth-level demon!

The demon snarled and turned to me, holding a rail-thin, gibbering man by the collar and looking insanely incongruous against the muted sage-green walls and cherry-wood furniture in my living room. One wingtip brushed the computer on my desk, and I resisted the urge to grab that wing and yank him away. Probably
not
a good idea when I still wasn’t certain if the demon would abide by my will.

“You should let me slay him, summoner,” the demon said in a deep voice that sounded like rolling boulders. He held his captive dangling above the floor with no apparent effort and no strain showing in his heavily muscled body. He towered over me, his head topping mine by several feet, with leathery wings the color of burnished copper extending several more feet beyond that. In a house with eight-foot ceilings, the demon would have been forced to crouch awkwardly and tuck in his wings in order to fit. Fortunately for him, my Acadian-style house had the traditional fifteen-foot ceilings designed for the subtropical climate of south Louisiana, where high ceilings helped keep houses cool.

I took a deep, steadying breath. The demon wasn’t resisting my control. One less thing to sweat right now. “No, Kehlirik,” I said carefully. “Our justice works differently in this sphere. But I thank you for your aid.” The demon’s captive had ceased his shrieking, at least, now reduced to whimpering moans. I rubbed the sudden gooseflesh on my arms, still horribly unnerved at how close I’d come to disaster.
Just a few seconds earlier…
I threw off a shudder and forced my attention back to the present.

A throbbing growl came from the demon’s throat. “He is a thief. Worthless. He has no honor.” He crouched and dropped the man to the floor, then pinned the intruder down with one foot. He tucked his wings behind him, clasping wickedly clawed hands together in front of him. A thick, sinuous tail curled around his legs, tip twitching in indication of his mood, and a dark and spicy scent surrounded him, foreign and wild. Crouched, his head was level with mine, and I was relieved that I could stop craning my neck to speak to him. This was only the second
reyza
I had ever seen, and I was still shocked at how
large
they were.

“It is … different here,” I said, even though I heartily agreed with the demon’s assessment of his captive. “I’m going to have enough trouble explaining away his talk of winged monsters.”

“If I slay him, he cannot speak of winged monsters,” Kehlirik replied, with undeniable logic. Then his broad nostrils flared as he snorted, “Not that I am a monster.”

I had to smile. “No,
reyza
. You are no monster.” Though the demon was monstrous in appearance—flat nose set in a bestial face, a wide mouth accented with curved fangs, and a thick ridge crest that swept back over his head and down his spine—I knew far too well that he was anything but a monster. “But it would be more difficult to explain a dead body,” I continued. “Murder is a serious offense here.”

The Tower and the Hive by Anne McCaffrey
Convincing Lina: A Bachelor of Shell Cove Novel (The Bachelors of Shell Cove Romance Book 2) by Siera London
Goodnight Lady by Martina Cole
Band of Demons (The Sanheim Chronicles, Book Two) by Rob Blackwell
Harlequin Historical May 2014 - Bundle 1 of 2: Notorious in the West\Yield to the Highlander\Return of the Viking Warrior by Lisa Plumley
The Enemy's Lair by Max Chase
Virginia Hamilton by Justice, Her Brothers: The Justice Cycle (Book One)
Moonsong by L. J. Smith
Leaving Unknown by Kerry Reichs
Exploración by Aurora Seldon e Isla Marín
Our partner