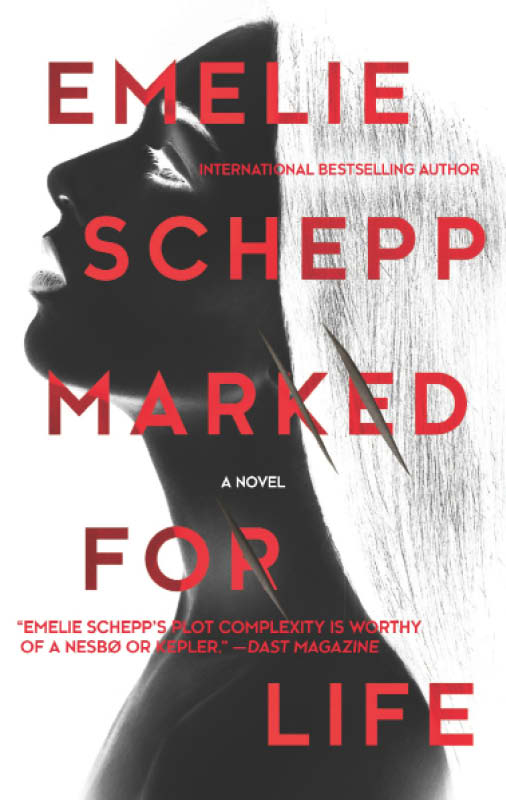 When a high-ranking head of the migration board is found shot to death in his living room, there is no shortage of suspects, including his wife. But no one expects to find mysterious, child-size fingerprints in this childless home.

Public prosecutor Jana Berzelius steps in to lead the investigation. Young and brilliant but emotionally cold, Berzelius, like her famous prosecutor father, won't be swayed by the hysterical widow or intimidated by the threatening letters the victim had tried to hide. She is steely, aloof, impenetrable. That is, until the boyâ¦

A few days later on a nearby deserted shoreline, the body of a derelict preteen is discovered, and with him, the murder weapon that killed the official. Berzelius finds herself drawn more deeply into the case when, as she attends the boy's autopsy, she recognizes something familiar on his small, scarred, drug-riddled body. Cut deep into his flesh are initials that scream child trafficking and trigger in her a flash of memory from her own dark childhood. Her connection to this boy has been carved with deliberation and malice that penetrate to her very core.

Now, to protect her own horrific but hidden past, she must find the real suspect behind these murders before the police do.

International bestselling author Emelie Schepp introduces us to the enigmatic, unforgettable Jana Berzelius in this first novel of a suspenseful, chilling trilogy.

“EMERGENCY SERVICES 112
, what has happened?”

Alarm operator Anna BergstrÃ¶m heard the woman's shaking voice and quickly glanced at the corner of the computer screen in front of her. The clock showed 19:42.

“Could you give me your name, please.”

“He isn't breathing. He's just lying there. He was lying there like that when I came home. And there's blood...blood on the carpet,” the woman sobbed.

“Is anybody else hurt?”

“I understand. Where are you now?”

The woman on the other end of the phone took a deep breath.

“Can I have your address please?”

“ÃstanvÃ¤gen 204, in LindÃ¶. It's a yellow house. With large flower urns outside.”

Anna's fingers worked quickly across the keyboard as she sought out ÃstanvÃ¤gen on the digital map.

“I am sending you the necessary help,” she said in a calming voice. “And I want you to stay with me on the telephone until they come.”

Anna didn't get any answer. She pressed her hand against the headset.

“Hello? Are you still there?”

“He really is dead.” The woman sobbed again. The sobs immediately turned into hysterical crying, then all that could be heard in the alarm service's telephone was a long anguished scream.

Detective Chief Inspector Henrik Levin and Detective Inspector Maria Bolander stepped out of their Volvo in LindÃ¶. The cold sea air from the Baltic caught Henrik's flimsy spring jacket. He pulled the zipper up to his neck and put his hands in the pockets.

On the paved driveway there was a black Mercedes together with two police cars and an ambulance. Some ways from the cordoned-off area stood another two parked cars, and judging by the lettering on their side doors, they belonged to the town's competing newspapers.

Two journalists, one from each paper, were leaning so hard against the police tape to get a better look that it stretched tautly across their down jackets.

“Oh hell, what an upscale place.” Inspector Maria Bolander, or Mia as she preferred, shook her head in irritation. “Statuary even.'' She stared at the granite lions, then caught sight of the huge urns next to them.

Henrik Levin remained silent and started to walk up the lit pathway to the house at ÃstanvÃ¤gen 204. Small heaps of snow on the gray edging stones bore witness that winter had not yet given up. He nodded to the uniformed officer Gabriel Mellqvist who stood outside the front door, then he stamped the snow off his shoes, opened the heavy door for Mia and they both went in.

Activity was feverish inside the magnificent home. The forensic expert worked systematically to find possible fingerprints and other traces of evidence. They had already lit up and brushed the doors and door handles. Now they were focused on the walls. Occasionally the flash of a camera lit up the discreetly furnished living room where the dead body lay on the striped carpet.

“Who found him?” Mia asked.

“His wife, Kerstin JuhlÃ©n,” Henrik said. “She apparently found him dead on the floor when she came home from a walk.”

Henrik Levin looked down at the body that lay before him. The dead man was Hans JuhlÃ©n, in charge of asylum issues at the Migration Board. Henrik stepped around the body, then leaned down to study the victim's faceâthe powerful jaw, the weather-beaten skin, the gray beard stubble and graying temples. Hans JuhlÃ©n had often been featured in the media, but the archive photos they used did not reflect the aged body that now lay in front of them. The dead man was dressed in neatly ironed trousers and a light-blue striped shirt. Its cotton material soaked up the growing bloodstains on his chest.

“Look, but don't touch,” forensic expert Anneli Lindgren said to Henrik and gave him a meaningful look as she stood next to the large windows.

“Yes, twice. Two entry points from what I can tell.”

Henrik glanced around the room, which was dominated by a sofa, two leather armchairs and a glass coffee table with chrome legs. Paintings by Ulf Lundell hung on the walls. The furniture didn't appear disturbed. Nothing was knocked over.

“No signs of a struggle,” he said and turned toward Mia, who was now standing behind him.

“No,” Mia answered without taking her eyes off an oval sideboard. On it lay a brown leather wallet with three five-hundred-kronor bills stuck out. She felt the sudden urge to pull them all outâor at least one, but she stopped herself. In her head she said, enough was enough; she had to pull herself together.

Henrik's eyes wandered to the windows which looked out onto the garden. Anneli Lindgren was still brushing for fingerprints.

Anneli Lindgren looked up at him from behind her spectacle frames.

“Not yet, but according to the victim's wife, one of these windows was open when she came home. I'm hoping I'll find something other than her prints on it.”

Henrik ran his fingers through his hair and turned back to Mia.

“Shall we go upstairs and have a few words with Mrs. JuhlÃ©n?”

“You go up. I'll stay down here and keep an eye on things.”

Upstairs, Kerstin JuhlÃ©n stared hollowly as she sat on the bed in the master bedroom with a cardigan draped around her shoulders. As Henrik entered the room, police officer Hanna Hultman took a respectful step backward and closed the door behind them.

On his way up the staircase Henrik had imagined the victim's wife as a delicate woman in elegant clothes. Instead she appeared heavyset, dressed in a faded T-shirt and dark stretch jeans. Her blond hair was styled in a blunt cut, with dark roots that revealed she was overdue for a visit to the hairdresser. Henrik's eyes searched the bedroom with curiosity. First he studied the chest of drawers and then the wall of photographs. In the middle of the wall hung a frame with a large faded photo of a happy wedding couple. He was aware that Kerstin JuhlÃ©n was looking at him.

“My name's Henrik Levin, and I'm the Detective Chief Inspector,” he said softly. “I'm sorry for your loss. You will have to excuse me for having to ask you a few questions at this time.”

Kerstin dried a tear with the sleeve of her cardigan.

“Can you tell me what happened when you came home?”

“Do you know what time it was?”

“About half past seven.”

“When you entered the house, did you see anybody else here then?”

Her lip quivered and she put her hands on her face.

Henrik knew this wasn't the right time for a more detailed interrogation so he decided to be brief.

“Mrs. JuhlÃ©n, we have some support coming for you, but I must ask just a few more questions in the meantime.”

Kerstin removed her hands from her face and rested them on her lap.

“You told someone a window was open when you came home.”

“And it was you who closed it?”

“You didn't see anything strange outside that window before you closed it?”

“I was afraid someone might try and come back in.”

Henrik put his hands in his pockets and pondered a moment.

“Before I leave you, I wonder if you'd like us to call anyone in particular for you? A friend? Relative? Your children?”

She looked down, her hands trembling, and whispered something in a barely audible voice.

Henrik couldn't make out what she was trying to say.

“I'm sorry, could you repeat that?”

Kerstin shut her eyes for a moment, then slowly raised her pained face toward him. She took a deep breath before she answered him.

Downstairs still in the living room, Anneli Lindgren adjusted her glasses. “I think I've found something,” she said. She was examining the print of a hand that was beginning to take form on the window frame. Mia went up to her and noted the very clear form of a palm with fingers.

“There's another one here,” Anneli pointed out. “They belong to a child.”

She fetched the camera to document her find. She adjusted the lens of her Canon EOS to the right focus and was taking photos just as Henrik came into the room.

Anneli nodded to him.

“They're small,” said Anneli and held up the camera in front of her face again, zoomed in and took yet another picture.

“So they belong to a child?” Mia clarified.

Henrik looked surprised and leaned close to the window to get a better look. The prints made an orderly pattern. A unique pattern. Clearly from a child-sized hand.

“Why is it strange?” said Mia.

Henrik looked at her before he answered.

“The JuhlÃ©ns don't have children.”