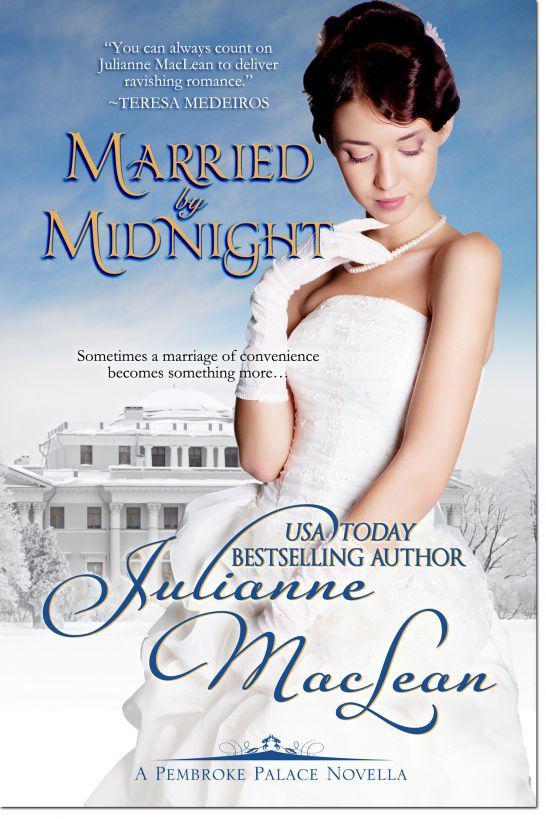 This is a work of fiction. Any references to historical events, real people, or real locales are used fictitiously. Other names, characters, places and incidents are the product of the author’s imagination, and any resemblance to actual events, locals or persons, living or dead, is entirely coincidental.

It was an intimidating prospect—to make love on one’s wedding night with a husband one might never see again—but in a few short hours, the deed would be done.

After listening carefully to the terms of this curious marriage contract, Lady Anne Douglas had agreed to every demand. Today she would speak her vows before God. She would promise to love, honor, and obey her husband until death parted them, so there could be no turning back.

Not that she wanted to turn back. To the contrary, this was a first-rate offer and she had been grateful to accept, for she was known far and wide, throughout the whole of England, as damaged goods. At least this bizarre pretence of a marriage would provide her with a generous financial settlement that would guarantee her independence forever.

Which was why, in a few short hours, she would walk down the chapel aisle to stand at the altar beside Garrett, her future husband, and later she would welcome him into her bed to claim his husbandly rights.

To ensure it was all legally binding.

Anne took a deep breath and let it out. Her heart was galloping like a beast, and she feared she might suddenly change her mind, order a carriage, and bolt. Why?

It was fear, plain and simple...

Turning away from the snowy landscape outside the window, she paced around the room and labored to steady her nerves. She would not, under any circumstances, entertain the notion that this was a mistake. Just because her betrothed wanted nothing to do with marriage in the traditional sense did not mean she would not benefit from the arrangement. That was why she chose this path in the first place.

Up until a few days ago, she had been so sure she could manage it...

A knock sounded at the door just then, and her maid entered with her wedding gown.

Anne’s stomach churned with panic, and she wrestled with the most overwhelming urge to break free and flee into the raging snowstorm outside, because heaven help her, she had been very irresponsible these past two weeks.

She should never have allowed herself to fall in love with him.

After the worst spring England had witnessed in over a century—marked by torrential rains, swelled rivers, and flooded fields that destroyed the summer crops—the country was now frozen solid beneath a hostile blanket of crusty white snow.

It had been a harsh winter that began in early November and seemed to go on without end—for there had been no respite from the fierce, bitter winds and constant spray of sleet and snow. And it was not yet half over.

Sitting by the hearth in her uncle’s stone manor house in Yorkshire, shivering beneath her heavy woolen shawl, Lady Anne Douglas was beginning to wonder if England were cursed, for surely this could not be normal.

A sudden blast of ice pellets struck the windowpanes, and the dogs began to bark downstairs. Tugging her shawl about her shoulders, she rose from her chair and crossed to the window. She looked down and saw a large black coach pulling to a halt in front of the house. It was a striking image against the pure white landscape. Not to mention the fact that they’d had no visitors for a month—for who in their right mind would venture out into such abominable weather?

The dogs continued to bark like ferocious beasts in the front hall while Anne watched two gentlemen in elegant black overcoats and top hats alight from the vehicle and hurry up the steps. One of them carried a black leather portfolio.

She leaned forward and touched her forehead to the frosty glass, but lost sight of the visitors as they reached the front entrance. There was some commotion below as the door opened and the dogs were put into a separate room, where they continued to bark and growl.

Who were these men, Anne wondered, and what did they want? It must be an extremely important matter of business to bring them all the way to the outer reaches of Yorkshire on such a bitterly cold day.

A half hour later, Anne was summoned to the drawing room.

Her uncle stood before the fire while the two mysterious gentlemen callers sat in chairs with their backs to the door, facing the sofa. As soon as Anne was announced, they rose to their feet, turned, and regarded her with interest.

She stared back at them with an equal measure of curiosity, mixed with a twinge of concern.

They were both exceedingly handsome with dark, chiseled facial features, muscular builds, and striking blue eyes. Brothers surely, for not only were they similar in appearance, they wore the same expression of inquisitive intelligence.

“
Well, don’t just stand there,” her uncle said, moving closer and dragging her into the room. “Come over by the fire so our guests can get a look at you.” He shoved her to stand on the threadbare carpet. “She may not be pure, but I daresay she’s appealing to the eye.”

The gentleman on the left cleared his throat and gave her a look of apology as he bowed courteously. “Lady Anne, it is an honor to make your acquaintance.” He fired an irate glance at her uncle, who blinked at him in the muted gray light fighting its way in through the frosty window.

“
What’s wrong?” her uncle Archibald asked. “Oh. I have not made the proper introductions, have I? Lord Hawthorne, allow me to present my niece, Lady Anne. Anne, this is Devon Sinclair, Marquess of Hawthorne, and his brother, Lord Blake, both of Pembroke Palace.”

A shiver of apprehension rippled up her spine. These were very auspicious guests indeed. Their father was the Duke of Pembroke, one of the highest-ranking peers in the realm. His palace, filled with priceless art and antiquities, was considered one of England’s greatest treasures. Some said their Italian Gardens were so beautiful they brought even the most cynical, hard-hearted men to tears.

Hadn’t she recently heard the gardens were damaged?

But what were these illustrious gentlemen doing here at her uncle’s manor house, three weeks before Christmas, so far from their home in the middle of a raging snowstorm?

She lowered her gaze and dipped into a curtsy. “Good afternoon.”

When she met the marquess’s cool blue eyes again, he inclined his head at her, as if studying her temperament.

“
Your uncle speaks highly of you,” he said.

She had the good sense, however, not to speak her mind.

Lord Hawthorne gestured toward the sofa. “Will you please join us?”

Her gaze darted back and forth between the two guests and her uncle. They were all staring at her as if she were some sort of odd novelty in a glass case.

“
Please, Lady Anne,” the other one said, as if he recognized her reluctance and wished to set her at ease.

She studied Lord Blake for a moment, experienced an inexplicable whisper of calm, and took a seat.

“
We understand you spent the past four years caring for your ailing grandmother,” Lord Hawthorne said. “A dutiful and selfless pursuit,” he added.

“
It wasn’t duty,” she explained. “It was love.” Her late grandmother—God rest her dear, sweet soul—had been the one person who never judged Anne or mistreated her after her terrible fall from grace.

“
We are sorry for your loss,” Lord Blake said.

“
Lady Anne was an excellent nursemaid and companion,” her uncle added. “As I said before, she may not be pure, but she is loyal.”

Anne regarded the marquess steadily. “Do you wish me to be a companion to someone?”

A hush fell over the room. “No,” he replied. Then he turned his eyes to the baron. “May I request a moment alone with Lady Anne,” he asked, “so that we may discuss this proposition in detail?”

“
There’s no need for any further discussion,” Archibald replied. “I have already accepted on her behalf. We need only make the arrangements, though I would like to have my solicitor involved.”

Anne frowned. “Your solicitor, Uncle? What sort of proposition did you agree to? If it concerns me, am I not to be consulted?”

Another tension-filled silence descended upon the room, this time heavy as lead.

Lord Hawthorne stood. “I must insist that you excuse us, sir. It is imperative that your niece understands the particulars. We will speak with her in private.”

At long last, her uncle rose from his chair. “If you insist, Lord Hawthorne, I must defer to your wishes. But rest assured that your proposal will not be refused. It
will
happen, whether she likes it or not.”

As soon as he left the room, Anne challenged the two men. “
What,
exactly, will happen?”

“
Nothing, if you do not wish it,” Blake replied. “I assure you, Lady Anne, we are not tyrants, and we have other prospects if you refuse—which is your right—but we wish you to know that you are at the top of our list.”

“
What list?” she asked, nearly horror-struck by the possibilities.

There was a quiet pause until, at last, Hawthorne answered the question. “We require a practical young woman to marry our brother before Christmas,” he said.

What You Have Left by Will Allison
Strong Medicine by Arthur Hailey
Who Are You? by Anna Kavan
Sundowner Ubunta by Anthony Bidulka
Elf Service by Max Sebastian
Before I Burn: A Novel by Heivoll, Gaute
Commodore Perry's Minstrel Show by Richard Wiley
Dropping In by Geoff Havel
The Rubber Band by Rex Stout
Good Girl : A Memoir (9781476748986) by Tomlinson, Sarah
Our partner