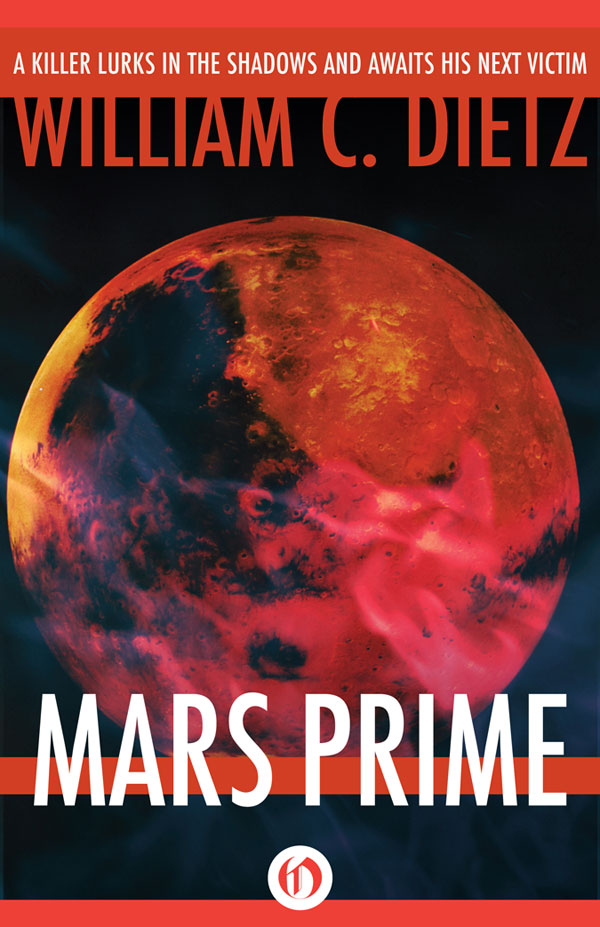 This one is for Joe Elder
Â

in appreciation for his friendship,
Â

The planet Earth hung against the blackness of space like a blue-white gem, far too distant for her flaws to show, looking much as she had for the last million years.

Only the closest of inspections would reveal the fact that the atmosphere was full of carbon dioxide, chloro-fluorocarbons, and halons, that the average sea level was six feet higher than it had been twenty years before, that the big-brained two-legged omnivores who had dragged themselves out of the mud and up to the very top of the food chain had reproduced themselves to the very brink of extinction and were trying to run.

Their means of escape, the first of many to come, was a ship called
Outward Bound.

She was shaped like a globe and made an ominous black silhouette as she drifted across the face of the planet below. Solar arrays grew like warts on the surface of her skin, radio antennas pointed accusingly outward, and observatories bulged like boils waiting to burst.

Not a single dollar, pound, franc, ruble or yen had been spent on the way that she looked. Every section, unit, component, part, wire, weld and rivet had at least one function, and sometimes more. Taken together those functions had a purpose, and the purpose was to reach Mars, and to do so as quickly and efficiently as possible.

And the same could be said of her multi-national crew. The core team had undergone years of training, passed endless batteries of tests, and proved themselves over and over again. The rest were semi-skilled filler, not unlike the third sons, convicts, misfits, and adventurers that have always populated human frontiers.

But with three thousand people aboard there were bound to be anomalies, people who seemed normal but were as flawed as the planet they came from.

One such individual paused inside a hatch, waited for a ship-suited com tech to pull her way past, and pushed off. And, due to the fact that this particular person had more than a thousand hours of zero-G experience, the move was graceful.

The crew member found a handhold, checked to make sure that no one was watching, and headed "up-ship."

The concepts of "up" and "down" don't mean much in a zero-G environment, but some idiot had decided that "up-ship" meant counter-clockwise, and "down-ship" meant clockwise. Other idiots had gone along with the idea and it had stuck.

Still another convention called for up-ship traffic to hug the overhead . . . while down-ship traffic cruised the surface of the deck.

Like everything else on the
Outward Bound
the corridor was extremely utilitarian. Recessed handholds appeared at regular three-foot intervals. Multicolored numbers, letters, arrows, and pictographs came and went. Gray conduit ran along the outside bulkhead, disappeared into padded junction boxes, and reappeared a few feet further on. Fiber-optic cables squirmed along beneath the deck gratings, turning here and there to link various parts of the ship together or mated within the privacy of mysterious black boxes. Rectangles of light arrived at regular twelve-foot intervals, rippled the length of the crew person's body, and vanished behind the curvature of the hull.

There were sounds too, like the incessant whisper of the air passing through miles of duct work, the never-ending announcements on the PA system, and the hollow booming noise that no one had been able to figure out.

But none of this registered on the person's mind because it was filled with the babble of many voices. There was Susy the conciliator, still searching for some sort of compromise, Frank the child, unsure of what to do, Norma the cynic, questioning the decision, Morey the prankster, making fun of Frank, and Kathy the observer, aloof as always, but watching from a distance.

But one voice dominated all the rest. It belonged to the newest member of the group, an entity who called himself "Otis the protector," and was intent on action.

"We have no choice. He suspects that we exist. That amounts to a threat. We must kill him."

"But that would be murder!" Susy wailed. "And murder is wrong!"

"Wrong, shmong," Norma said testily. "You say he knows. I say he doesn't."

"We could be locked up," Frank replied, instantly frightened. "That would be awful!"

"And boring," Morey added. "Almost as boring as this conversation."

"What about a compromise?" Susy asked. "We could make him look bad, get him fired. It worked on what's his name . . . Wilkens."

"Get serious," Otis said sarcastically. "The ship is scheduled to break orbit in three hours. We don't have enough time to execute one of your chicken shit plans."

There was silence for a moment as they thought it over. Morey was the first to speak. "All right, I'm in."

Kathy sounded distant. "Do what you think is best. I have a job to do."

"Shut up. We agreed to take him out, I'm the one equipped to do the job, and the rest of you can take a break."

There was some mumbling, especially from Frank and Norma, but it slowly died away. And, with the exception of Kathy's watchful presence, Otis was in control. It felt good to have the body all to himself. He gloried in his freedom, saw the "MEDICAL" sign strobe up ahead, and collected his thoughts.

Otis looked back over his shoulder, saw that the corridor was empty, and turned his eyes forward again. A lab tech pushed himself out into the corridor, glanced at his watch, and headed up-ship.

Otis felt a rush of adrenaline as he entered the reception area. It was empty of both people and furniture. Velcro patches indicated where patients could hook themselves to the bulkheads, elastic bands kept the magazines in their racks, and an unsecured clip board drifted only inches below the overhead.

There was a podium-shaped console however, and a velcro patch to hold the records tech in place, but he or she was nowhere to be seen. A hand-lettered sign had been taped to the front of the console. The sign said, "Gone to ceremony, buzz for service," and a crudely drawn arrow pointed down toward a button.

Otis could feel the blood pound in his head as he reached for a back pocket, found the specially modified work gloves, and pulled them on.

This was it, the last opportunity to stop, to spare the doctor's life. Otis grinned. Fat chance.

He pushed himself away from the entrance, used the console for a rebound, and headed straight for the double-wide hatch. It sensed his approach and opened with a whisper.

Corridors branched right and left, and could have been a problem, except that Otis had gone to the trouble of memorizing all of them ahead of time. With the exception of some command and control stuff, anyone with a terminal could pull up design schematics for the entire ship, and the medical facility was far from secret.

Otis turned right, pulled himself past the examining rooms, the diagnostic center, and the pathology lab until the cubicles appeared. The ship carried eight doctors and each one had a small cubicle. Dr. Havlik's office would be the second on the right. The doctor would be floating free or velcroed to the wall. Chances were that he'd be jacked into his terminal or spooling through some medical text.

The first task was to immobilize him, the second was to silence him, and the third was to kill him. A relatively easy task given the advantage of surprise.

The sharp smell of antiseptics filled the air, supply cabinets lined the bulkheads, and stainless steel gleamed beneath the lights.

Otis was alert, ready for almost anything, except an attack from within.

Frank came boiling up out of nowhere, took control of the body, and shouted, "NO! NO! NO!"

The words were incredibly loud within such a confined space. Otis knew Frank's history rather well, since it was nearly identical to his own, and understood what had taken place. The smell of antiseptics and the sight of medical equipment had triggered memories from Frank's childhood. Painful memories that made him wild with fear.

Otis responded with overwhelming force. He pushed Frank down into the darkness and ordered the others to keep him there. He wanted to speak with them, to emphasize the importance of keeping Frank under control, but didn't have the time.

Dr. Havlik had heard the noise. He stuck his head out of his office and looked around. He had bright brown eyes, thinning blond hair, and a sensuous mouth. He sounded annoyed. "Oh, it's
you.
What's going on?"

It was now or never. Otis released the stanchion that Frank had grabbed, used it to brace his feet, and pushed off.

Havlik saw him coming, started to move back, but was far too slow.

Otis crossed the intervening space, wrapped both arms around the doctor, and snapped his head forward. It was Kathy's idea, something she'd been taught in the military, and it worked. Bone hit bone, Havlik's eyes lost focus, and a glob of saliva drifted out of his mouth. The doctor had bad breath and it made Susy gag. Momentum carried them into the cubicle.

Otis worked quickly. He knew Havlik would recover at any moment. Recover and fight back. Otis couldn't allow that. The doctor was built like a prize fighter and capable of putting up a real tussle.

Otis opened the cargo pocket on his right thigh, removed the roll of duct tape, and used it to immobilize his victim. Around and around it went, like the rope in old-fashioned cartoons, wrapping Havlik within a cocoon of tape. Arms, hands, and legs until he couldn't move and looked like a giant grub.

Otis tore what remained of the tape off and the doctor began to spin. His eyelids fluttered and his mouth made inarticulate sounds. Globules of saliva circled his head like planets orbiting a sun. Havlik was coming around.

The complete absence of gravity made the next part rather easy. Otis pushed the doctor into a corner, tacked him into place with the last of the tape, and looked for a way to anchor his feet to the deck. He cursed himself for failing to think of the problem earlier. A blow delivered by someone in free-fall carries no force. He looked around.

Ah, there they were, over by the hatch. A pair of bright pink magnetic clamps. They were of the standard U-shaped variety and were used for a number of tasks.

Otis retrieved the clamps, placed them in front of Havlik, and slid his feet under the padded arches. The doctor was awake. He looked frightenedâvery, very frightenedâand his lips were dry. He ran his tongue along them. "So, I was right."

Otis brought his hands up. The gloves were black. Light winked off the pieces of metal that he had so painstakingly super-glued to each finger. "Yes, you were right."

The combination desk-computer terminal was right next to him. Otis reached over, grabbed hold of the standard head-jack, and pulled. Cable left the hidden reel with a soft whirring noise.

Otis brought the wire up, gave a jerk to lock it in place, and slid the jack into the side of Dr. Havlik's head. The psychiatrist's eyes grew larger.

Otis turned, looked for the auxiliary head-jack, and found it. He smiled as he pulled the jack up to his own head and plugged it in. Suddenly both minds were together, swirling in and around each other, different but the same. Now they could speak without words, share the same thoughts, feel the same feelings. Havlik was frightened. Otis fed on it.