Read Mary and Lou and Rhoda and Ted: A History of the Mary Tyler Moore Show Online

Mary and Lou and Rhoda and Ted: A History of the Mary Tyler Moore Show 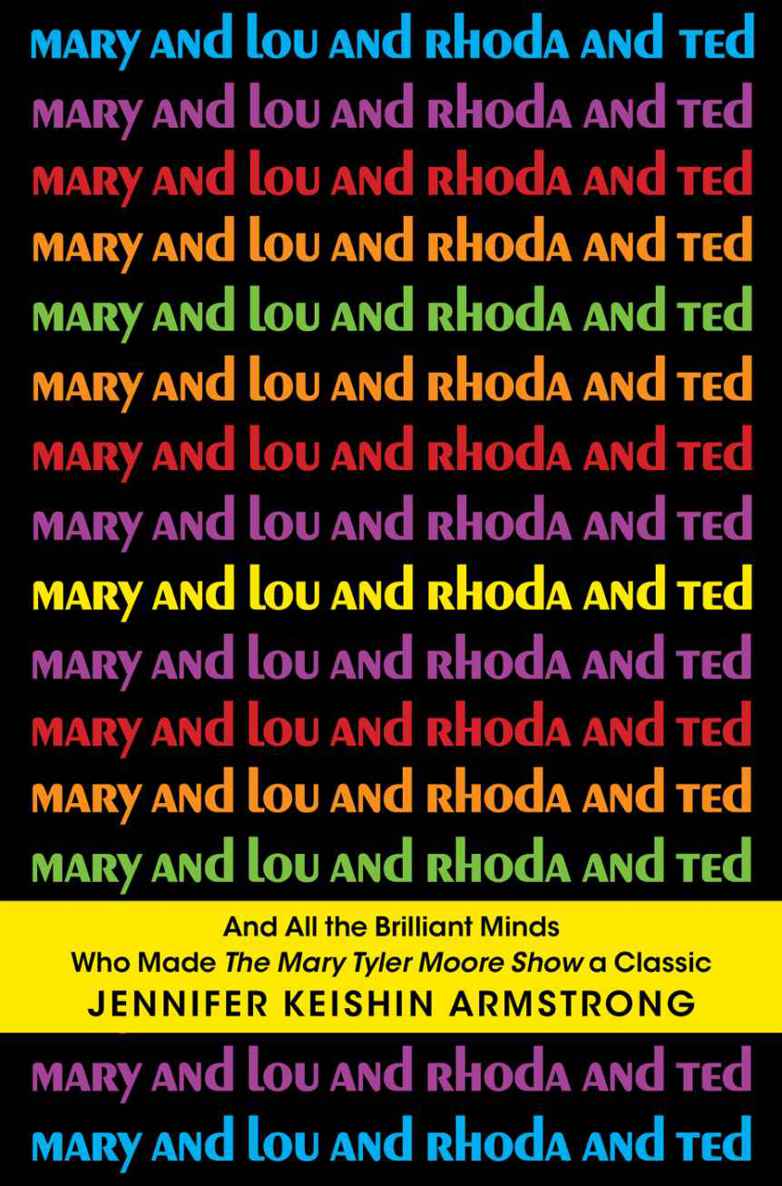 Introduction: Comedy and the Single Girl

To A. Jesse Jiryu Davis. Obviously.

Treva Silverman had always wanted to be the beautiful, funny, smart heroine of a 1930s screwball comedy. In that world, the woman bantered with the man; the woman was independent, sexy, desirable, witty. Idiosyncratic actresses like Jean Arthur, Carole Lombard, Rosalind Russell, Claudette Colbert, and Margaret Sullavan were the leading ladies there. Unfortunately, in the 1950s, when Treva was a twelve-year-old in Cedarhurst, Long Island—the time when this desire took hold of her—the movie world had moved on from fast-talking comediennes to man-pleasing models of femininity like Doris Day, who seemed to have endless hang-ups about being good and pure, and Marilyn Monroe, who was the quintessential dumb blonde. The idea of an equal partnership between equally bright men and women trading quips had all but disappeared from films. And TV was even worse:
Father Knows Best
and
The Donna Reed Show
featured “dialogue” in which the woman’s only role was to say, “Yes, dear.” The most popular
TV comedy heroine was Lucy, who wanted to be in show business but had to hide it from Ricky, who didn’t approve. The central joke of the show hinged on the fact that male approval ruled.

Magazines bombarded Treva with advice to young women—
talk about his interests, don’t be competitive, learn how to make his favorite meals.
To get the guy, she learned, she had to be all about him. At her grammar school, PS #3, her girlfriends chastised her for winning a spelling bee over Jerry Yaeger, the very boy she had a crush on. She’d never have a chance with him now, they lamented.

So Treva would settle for sitting next to her older sister, Corinne, in the moth-eaten seats of her neighborhood’s only revival movie house, watching and listening to her idols, Jean Arthur and Carole Lombard. Jean Arthur, in her day, made a name for herself as a funny leading lady in the Frank Capra films
Mr. Deeds Goes to Town, Mr. Smith Goes to Washington,
and
You Can’t Take It with You
. Lombard was once described by Graham Greene as “
platinum blonde, with a heart-shaped face, delicate, impish features, and a figure made to be swathed in silver lamé, [who] wriggled expressively through such classics of hysteria as
Twentieth Century
and
My Man Godfrey
.” When Treva watched Jean Arthur and Carole Lombard, she wanted to soak up every last bit of them, the way her movie-house popcorn soaked up melted butter.

Treva had one other escape route from suburban ennui: Every week, she took the train from her family’s home in Cedarhurst for more than an hour to get to New York City. It was where she belonged, she was sure. For now, though, she’d settle for going there weekly for her piano lessons at Columbia University. Two officials at the Juilliard School had declared her a “genius” at age five. She had perfect pitch and could play almost any piece by ear after hearing it once; she could transpose into any key. A unique talent, to be sure. But besides her music, something else was becoming a passion.

After her piano lesson every week, she’d race down to the New York Public Library in midtown Manhattan to read her way through the vast stacks of the humor section, in alphabetical order: Robert
Benchley, Dorothy Parker, S. J. Perelman, James Thurber. There, at the Forty-second Street library, she had found her people: the humor writers for the
New Yorker
. Along with some journalists, critics, and actors, they had met daily throughout the ’20s for lunches at the Algonquin Hotel, forming a loose camaraderie called the Algonquin Round Table. They were known for their sharp witticisms and one-liners, which were quoted all over the newspaper columns. More importantly, the Algonquin Round Table consisted of men and—yes!—women. Not only Dorothy Parker, one of the wittiest of them all, but also Edna Ferber, Tallulah Bankhead, and Beatrice Kaufman.

Treva read on and on, as afternoon turned into dusk, the shadows cast by the library’s stone lions growing longer until they dissolved. She wished she could travel back to the days of the Algonquin Round Table, overhearing them from a neighboring table, or, even better, somehow getting a seat at that table.

When Silverman graduated from Bennington College nearly a decade later, even though the joke of the day was to try to graduate with an “M.R.S. degree,” she had nestled nicely into a Manhattan creative life on her own. She had broken into comedy writing and rejoiced when, one by one, a sketch or song of hers was accepted for an off-Broadway show or for Upstairs at the Downstairs, a topical revue nightclub that featured future stars like Lily Tomlin and Madeline Kahn. The rest of her evenings were spent using her musical talent: She played and sang show tunes—Rodgers and Hart, Cole Porter, Gershwin—anywhere around town that had a piano and offered the chance to make a few bucks.

She played at bars, bowling alleys, Japanese restaurants. She got to meet people she never would have met otherwise, who lived the kinds of lives she’d only read about. There was the guy who pulled up his jacket sleeve to reveal five men’s watches and whispered to her, “You got a boyfriend who needs a Patek-Philippe timepiece?” There was the guy in the strip joint who wore a black eye patch—he had lost his left
eye in a knife fight—who asked her, “Are you a sport, or are you a good girl?” She had only a hazy idea of what a sport was, but she knew she didn’t want to be one, and replied that she was a good girl. He gave her a twenty anyway. This piano-playing stint wasn’t exactly the way to find a husband, but at least it left her days free to write her songs and sketches, and she was making enough money to survive.

Her colorful life was radically out of step with those of her girlfriends from high school and college. Not only did they have respectable jobs in publishing and in advertising where nobody asked them to buy stolen watches, but most of them were gradually being whisked away to the magical never-never land called married life. You had to get there by age twenty-five or else—
or else
. . . well, nobody knew exactly what the
else
was, but it wasn’t anything a good girl wanted. Treva did want a long-term relationship, but in the meantime she wanted everyone who asked her why she wasn’t married to shut up.

Her parents believed in her talent but were nervous for her. They saw her life as all promise and hope, with no guarantee of a stable future. “Treva,” her mother suggested one day, “why don’t you take a shorthand course? Just as a fallback, honey.”

Treva rolled her eyes. “Mom, I don’t want to learn shorthand so that I can take down some man’s ideas. I want someone taking down
my
ideas.”

Murder Gone A-Rye (A Baker's Treat Mystery) by Nancy J. Parra
Her Enemy by Leena Lehtolainen
XXI by Francisco Miguel Espinosa
Keeping You Forever (A Harbor Love Series) by Marulanda, Jaclyn
Destined To Fall by Bester, Tamsyn
The Wanderer by Timothy J. Jarvis
The Boy Book by E. Lockhart
Hers for the Holidays by Samantha Hunter
Engaging the Enemy by Heather Boyd
The Denim Dom (Siren Publishing Sensations) by Tymber Dalton
Our partner