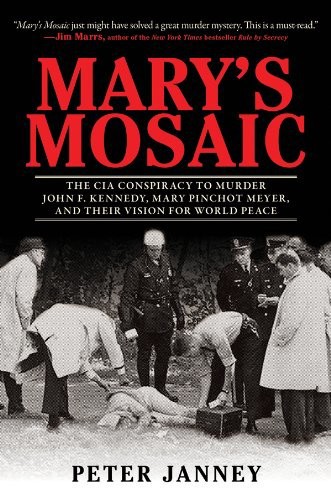 All Rights Reserved. No part of this book may be reproduced in any manner without the express written consent of the publisher, except in the case of brief excerpts in critical reviews or articles. All inquiries should be addressed to Skyhorse Publishing, 307 West 36th Street, 11th Floor, New York, NY 10018.

E
ARLY IN
1976, about six months after I began probing into the Kennedy assassination for the
Village Voice
, an article caught my attention in—of all places—the
National Enquirer
. The weekly tabloid was not generally known for its investigative veracity, but this particular story was thoroughly documented. The subject was Mary Pinchot Meyer, a Washington socialite who’d been shot twice and murdered while walking near the Potomac River on October 12, 1964. Since the originally accused assailant had been acquitted, the identity of her killer remained unknown. Publicly, so did the identity of her lover, until the
Enquirer
story alleged that for almost two years before his assassination on November 22, 1963, Mary Meyer had been having an affair with President John F. Kennedy.

The
Enquirer
recounted—and this would soon be corroborated in other periodicals—that Mary had kept a diary. The weekend after her death, a small group of people were said to have gathered at her Georgetown home in search of it. Cord Meyer, her ex-husband and a high official in the CIA, was there. So was James Angleton, head of the CIA’s counterintelligence division, and his wife, Cicely, a close friend of Mary’s. Also present was Tony Bradlee, Mary’s sister and the wife of
Washington Post
editor Ben Bradlee.

The story went that none of them could locate Mary’s diary and that her sister had later found it inside a locked steel box containing dozens of letters, including some from the slain president Kennedy. Bradlee had then turned the box over to Angleton, who took the material to CIA headquarters. James Truitt, a journalist for
Newsweek
and another friend of the Meyers’, said he’d
received a letter from Angleton saying, “As to the diary and related papers, I burned them.”

For more than twenty years, Angleton had been a “spook’s spook” who roamed the Agency corridors looking to ferret out penetrations by the Soviet Union. Then in 1974, a new CIA director, William Colby, leaked word to the media that Angleton had also been in charge of Operation Chaos, a domestic intelligence-gathering program that far exceeded the CIA’s original charter. Angleton was forced to resign. Not long thereafter, he began meeting with journalists for the first time, obviously intent on getting his side of certain stories on the record.

I was one of those journalists, although I never really understood why Angleton chose to wine and dine me on three occasions at his customary meeting place, Washington’s Army and Navy Club. After all, the
Village Voice
hardly seemed like his cup of tea. And I did not disguise the fact I was looking into a probable conspiracy in the death of President Kennedy. Indeed, the first time we met, late on a mid-December afternoon in 1975 in the plush club lounge, I gave him one of my
Voice
articles to leaf through. Angleton lit a cigarette, took a sip of his martini, and said, “The subject is a far more complex one than reflected in your article.”

After the assassination, Angleton’s counterintelligence branch had been assigned as the CIA’s direct liaison to the Warren Commission, of which former CIA director Allen Dulles was a member. I wondered, why Angleton’s office? “Because we had the research facilities, knew the mechanisms of the KGB and foreign intelligence,” Angleton replied quickly. “We knew every assassination in history, knew more about the sophistication of the Cuban DGI, that type of thing.” Pretty obviously, he was trying to steer my thoughts toward possible foreign involvement. Angleton dismissed the rumors that Lee Harvey Oswald might have been an American agent as “completely false” and continued: “Unless one knows the dossiers that are in Moscow and Cuba, there can be no ultimate determination.” Several times over the course of our get-togethers, he would raise the specter of the KGB’s Department 13, which specialized in what those in the trade called “wet affairs” (assassinations).

Angleton was one of the strangest men I ever met: tall, bespectacled, stoop-shouldered, with his appearance calling to mind the image of an ostrich whose head seemed, despite itself, to be peering out at the world after a lifetime buried in the sand. But what secrets was he willing now to unearth, and what was his motivation? Was he still, in fact, covering someone’s tracks—even, perhaps, his own? In April 1976, we met for the second time, and one of the first
things I asked him about was the
Enquirer
’s revelatory piece about Mary Meyer and her diary. Angleton gazed out the window for a long moment. Then he replied that he had been acting in a private capacity for the family, and in no way for the CIA, which he hastened to add had nothing to do with her death. He went on to relate a fascinating, even occult, story.

Angleton and his wife had planned to go out to dinner and a show with Mary Meyer that October evening in 1964. When news came over the radio that someone had been killed in a park not far from where she lived, Cicely Angleton had a premonition that it was Mary. So that night, they drove over to her house, but found it completely dark. A grim foreboding grew stronger in Angleton’s wife. Angleton said he’d called Meyer’s answering service, which at first simply said that she wasn’t in. But when Angleton explained they had a date with her, and that his wife was hysterical in the car, he was told of Meyer’s death.

The entire time Angleton was relating this, I noticed that he was digging his fingers deeper and deeper into the wooden arm of the comfortable chair in the Army and Navy Club.

I have puzzled over that moment for many years. Over the course of time, I read Timothy Leary’s memoir, which only added to the mystery of Mary Meyer. He maintained that he’d turned her on to LSD, that she may even have taken a “trip” with President Kennedy, and that she’d called Leary the day after the assassination indicating that “he was changing too fast; they couldn’t control him anymore.”
They
clearly implied that JFK had been assassinated by elements within our own government.

Now, with Peter Janney’s remarkable book
Mary’s Mosaic
, the questions that long haunted me have been largely answered. Now I see how Angleton had been trying to bend the truth, and why. Not only about Mary Meyer, but about who killed Kennedy, which all but certainly involved the same element of individuals.

Quitting (previously published as Mastering the Art of Quitting) by Peg Streep
The Dragon in the Sea by Frank Herbert
Liberty At Last (The Liberty Series) by James, Leigh
This Much Is True by Owen, Katherine
A Cross to Bear by M.J. Lovestone
First Comes Baby...: The Loner's Guarded Heart by Michelle Douglas
Irresistible by Pierre, Senayda
Nefertiti by Michelle Moran
White Wolf by Susan Edwards
Clarity 3 by Loretta Lost
Our partner