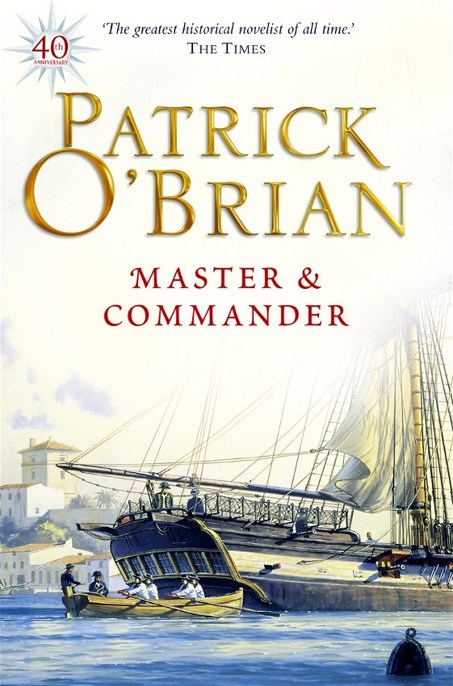 Patrick O'Brian is the author of the acclaimed Aubrey-Maturin tales and the biographer of Joseph Banks and Picasso. His first novel,
Testimonies
, and his
Collected Short Stories
have recently been reprinted by HarperCollins. He translated many works from French into English, among the novels and memoirs of Simone de Beauvoir and the first volume of Jean Lacouture's biography of Charles de Gaulle. In 1995 he was the first recipient of the Heywood Hill Prize for a lifetime's contribution to literature. In the same year he was awarded the CBE. In 1997 he was awarded an honurary doctorate of letters by Trinity College, Dublin. He died in January 2000 at the age of 85.

The Works of Patrick O'Brian

in order of publication

THE FORTUNE OF WAR

THE FAR SIDE OF THE WORLD

THE REVERSE OF THE MEDAL

THE LETTER OF MARQUE

THE NUTMEG OF CONSOLATION

BLUE AT THE MIZZEN

LYING IN THE SUN

A BOOK OF VOYAGES

Also published in paperback by HarperCollins 1993

Also published in paperback by Fontana 1971

Copyright © The estate of the late Patrick O'Brian CBE 1970

Set in Imprint by

All rights reserved. no part of this publication may be reproduced, stored in a retrieval system, or transmitted, in any form or by any means, electronic, mechanical, photocopying, recording or otherwise, without the prior permission of the publishers.

This book is sold subject to the condition that it shall not, by way of trade or otherwise, be lent, re-sold, hired out or otherwise circulated without the publisher's prior consent in any form or binding or cover other than that in which it is published and without a similar condition including this condition being imposed on the subsequent purchaser.

When one is writing about the Royal Navy of the eighteenth and early nineteenth centuries it is difficult to avoid under statement; it is difficult to do full justice to one’s subject; for so very often the improbable reality outruns fiction. Even an uncommonly warm and industrious imagination could scarcely produce the frail shape of Commodore Nelson leaping from his battered seventy-four-gun
Captain
through the quarter-gallery window of the eighty-gun
San Nicolas
, taking her, and hurrying on across her deck to board the towering San Josef of a hundred and twelve guns, so that ‘on the deck of a Spanish first-rate, extravagant as the story may seem, did I receive the swords of the vanquished Spaniards; which, as I received, I gave to William Fearney, one of my bargemen, who put them, with the greatest
sang-froid
, under his arm’.

The pages of Beatson, James and the
Naval Chronicle
, the Admiralty papers in the Public Record Office, the biographies in Marshall and O’Byrne are filled with actions that may be a little less spectacular (there was only one Nelson), but that are certainly no less spirited—actions that few men could invent and perhaps none present with total conviction. That is why I have gone straight to the source for the fighting in this book. From the great wealth of brilliantly-fought, baldly-described actions I have picked some I particularly admire; and so when I describe a fight I have log-books, official letters, contemporary accounts or the participants’ own memoirs to vouch for every exchange. Yet, on the other hand, I have not felt slavishly bound to precise chronological sequence; and the naval historian will notice, for example, that Sir James Saumarez’ action in the Gut of Gibraltar has been postponed until after the grape-harvest, just as he will see that at least one of my
Sophie’s
battles was fought by quite another sloop, though one of exactly the same strength. Indeed, I have taken great liberties; I have seized upon documents, poems, letters; in short,
j’ai pris mon bien là où je l’ai trouvé
, and within a context of general historical accuracy I have changed names, places and minor events to suit my tale.

My point is that the admirable men of those times, the Cochranes, Byrons, Falconers, Seymours, Boscawens and the many less famous sailors from whom I have in some degree compounded my characters, are best celebrated in their own splendid actions rather than in imaginary contests, that authenticity is a jewel; and that the echo of their words has an abiding value.

At this point I should like to acknowledge the advice and assistance I have had from the patient, erudite officials of the Public Record Office and of the National Maritime Museum at Greenwich, as well as the commanding Officer of HMS
Victory
: no one could have been kinder or more helpful.

The music-room in the Governor's House at Port Mahon, a tall, handsome, pillared octagon, was filled with the triumphant first movement of Locatelli's C major quartet. The players, Italians pinned against the far wall by rows and rows of little round gilt chairs, were playing with passionate conviction as they mounted towards the penultimate crescendo, towards the tremendous pause and the deep, liberating final chord. And on the little gilt chairs at least some of the audience were following the rise with an equal intensity: there were two in the third row, on the left-hand side; and they happened to be sitting next to one another. The listener farther to the left was a man of between twenty and thirty whose big form overflowed his seat, leaving only a streak of gilt wood to be seen here and there. He was wearing his best uniform—the white-lapelled blue coat, white waistcoat, breeches and stockings of a lieutenant in the Royal Navy, with the silver medal of the Nile in his buttonhole—and the deep white cuff of his gold-buttoned sleeve beat the time, while his bright blue eyes, staring from what would have been a pink-and-white face if it had not been so deeply tanned, gazed fixedly at the bow of the first violin. The high note came, the pause, the resolution; and with the resolution the sailor's fist swept firmly down upon his knee. He leant back in his chair, extinguishing it entirely, sighed happily and turned towards his neighbour with a smile. The words 'Very finely played, sir, I believe' were formed in his gullet if not quite in his mouth when he caught the cold and indeed inimical look and heard the whisper, 'If you really must beat the measure, sir, let me entreat you to do so in time, and not half a beat ahead.'

Jack Aubrey's face instantly changed from friendly ingenuous communicative pleasure to an expression of somewhat baffled hostility: he could not but acknowledge that he
had
been beating the time; and although he had certainly done so with perfect accuracy, in itself the thing was wrong. His colour mounted; he fixed his neighbour's pale eye for a moment, said, 'I trust . . .', and the opening notes of the slow movement cut him short.

The ruminative 'cello uttered two phrases of its own and then began a dialogue with the viola. Only part of Jack's mind paid attention, for the rest of it was anchored to the man at his side. A covert glance showed that he was a small, dark, white-faced creature in a rusty black coat—a civilian. It was difficult to tell his age, for not only had he that kind of face that does not give anything away, but he was wearing a wig, a grizzled wig, apparently made of wire, and quite devoid of powder: he might have been anything between twenty and sixty. 'About my own age, in fact, however,' thought Jack. 'The ill-looking son of a bitch, to give himself such airs.' With this almost the whole of his attention went back into the music; he found his place in the pattern and followed it through its convolutions and quite charming arabesques to its satisfying, logical conclusion. He did not think of his neighbour again until the end of the movement, and then he avoided looking in his direction.

The minuet set Jack's head wagging with its insistent beat, but he was wholly unconscious of it; and when he felt his hand stirring on his breeches and threatening to take to the air he thrust it under the crook of his knee. It was a witty, agreeable minuet, no more; but it was succeeded by a curiously difficult, almost harsh last movement, a piece that seemed to be on the edge of saying something of the very greatest importance. The volume of sound died away to the single whispering of a fiddle, and the steady hum of low conversation that had never stopped at the back of the room threatened to drown it: a soldier exploded in a stifled guffaw and Jack looked angrily round. Then the rest of the quartet joined the fiddle and all of them worked back to the point from which the statement might arise: it was essential to get straight back into the current, so as the 'cello came in with its predictable and necessary contribution of
pom, pom-pom-pom, poom
, Jack's chin sank upon his breast and in unison with the 'cello he went
pom, pom-pom-pom, poom
. An elbow drove into his ribs and the sound
shshsh
hissed in his ear. He found that his hand was high in the air, beating time; he lowered it, clenched his mouth shut and looked down at his feet until the music was over. He heard the noble conclusion and recognized that it was far beyond the straightforward winding-up that he had foreseen, but he could take no pleasure in it. In the applause and general din his neighbour looked at him, not so much with defiance as with total, heart-felt disapprobation: they did not speak, but sat in rigid awareness of one another while Mrs Harte, the commandant's wife, went through a long and technically difficult piece on her harp. Jack Aubrey looked out of the long, elegant windows into the night: Saturn was rising in the south-south-east, a glowing ball in the Minorcan sky. A nudge, a thrust of that kind, so vicious and deliberate, was very like a blow. Neither his personal temper nor his professional code could patiently suffer an affront: and what affront was graver than a blow?