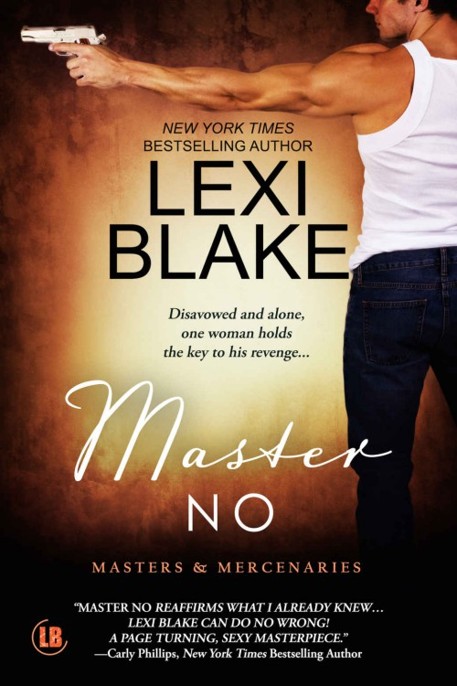 Praise for Lexi Blake and Masters and Mercenaries…

“Lexi Blake's MASTERS AND MERCENARIES series is beautifully written and deliciously hot. She's got a real way with both action and sex. I also love the way Blake writes her gorgeous Dom heroes--they make me want to do bad, bad things. Her heroines are intelligent and gutsy ladies whose taste for submission definitely does not make them dish rags. Can't wait for the next book!”

“A Dom is Forever is action packed, both in the bedroom and out. Expect agents, spies, guns, killing and lots of kink as Liam goes after the mysterious Mr. Black and finds his past and his future… The action and espionage keep this story moving along quickly while the sex and kink provides a totally different type of interest. Everything is very well balanced and flows together wonderfully.”

“A good read that kept me on my toes, guessing until the big reveal, and thinking survival skills should be a must for all men.”

“Certain authors and series are on my auto-buy list. Lexi Blake and her Masters & Mercenaries series is at the top of that list... this book offered everything I love about a Masters & Mercenaries book – alpha men, hot sex and sweet loving… As long as Ms. Blake continues to offer such high quality books, I’ll be right there, ready to read.”

“I have absolutely fallen in love with this series. Spies, espionage, and intrigue all packaged up in a hot dominant male package. All the men at McKay-Taggart are smoking hot and the women are amazingly strong sexy submissives.”

and be entered to win a $25 gift certificate

to the bookseller of your choice.

There's a new contest every month!

All books are difficult to write. Don’t let anyone tell you the act of creating a story is a breeze. Putting your heart and soul on the page is always hard, but some books are more difficult than others. Master No was one of those books. Tennessee Smith was a hard nut to crack and I sometimes get cranky when I have to deal with those characters. My husband likes to call me a “method” writer. I often carry the character’s emotions and moods home with me and Ten wasn’t fun to live with through much of this novel. So I would like to thank my family and friends who got through my “Ten period” with tolerance and love and likely a bunch of liquor.

Thanks to my editor and all around sister from another mister—Chloe Vale and to my beta team. Riane Holt and Stormy Pate, you’re the best!

And I would like to thank you, dear reader. This is summer marks my fifth year in publishing and I’m still floored every single time you pick up a book and follow me down the rabbit hole. I’m going to warn you, this particular hole is deep and sometimes a bit dark. But it you follow me to the end, I promise there will always be light.

An excerpt from Addict by Lexi Blake, Coming September 22, 2015

From Sanctum with Love by Lexi Blake, Coming February 23, 2016

Tennessee Smith took a deep breath, his body aching. At least his lungs still worked. God knew his nerves were still functioning in places. They were firing off like a machine gun, shooting never-ending pain through much of his system. Not his arms though. No, his arms had gone numb long hours before, and he was fairly certain there would be some damage there. Twenty-four hours hanging from a fucking meat hook would do that to a guy. Twenty-four hours of blood and pain and torture. Twenty-four hours of hell.

“You’re awake,” a familiar voice said. “I told them you had the constitution of a rutting bull. They didn’t believe me. They think you’ll be out for another few hours, but I knew you wouldn’t let me down.”

Oh, but she’d let him down. Months they’d spent working together. She’d been his cover, his “wife” as he traveled through the Middle East. They’d been paired together, and though he’d hated the idea of having a partner, he’d settled into it. Hell, after a couple of times in Dawn’s bed, he’d started to like having regular sex, and then he’d just plain liked her. She was sweet, treated him like he could do no wrong, always listened to his advice. He’d been the senior partner and she the helpmate. It was like the Agency had sent him a sexual partner and backup all in one super-hot, blonde package.

Over the months they’d worked together, he’d fallen into a relaxing pattern. They would move to a new city and slowly he would work his way into a position where he could start to gather the information he needed. She would talk to the wives, but beyond that, she would turn whatever place they were staying at into a home—into a place where he could relax. She would cook his favorite foods, somehow find his favorite bourbon even in Muslim countries. And she would fuck him every night.

Somewhere along the way, he’d stopped thinking about her as cover and he’d started thinking of her as his girlfriend.

He’d even bought her a ring. He’d known he would never find another woman who suited him, who understood his needs. Dawn had been the perfect wife for him.

She’d also been a double agent, and now he was in the hands of a terrorist group who wanted to know drone locations and the identity of agents in the area.

“Oh, there’s the Tennessee I knew was always hiding under the surface,” Dawn said with a smirk. “I always knew there was a nasty bastard brewing there.”

“And I should have known there was a traitorous bitch under your fifties housewife exterior.”

Dawn simply laughed. “It worked pretty well on you. You think you’re so deep, but you were probably the easiest agent I’ve ever worked over. You were a breeze, Smith. All you needed was a dose of constancy and you gave it all up.”

She was wrong. He’d given absolutely nothing up. His trust, perhaps that had been given too quickly, but he hadn’t told her anything the reports wouldn’t have told her. And this torture scene wasn’t going to play out the way she hoped. He’d already been worked over for hours, and he’d found a place where the pain couldn’t touch him. Now it was all coming back, but he’d survived the torture. He hadn’t broken and he wouldn’t. He would let them cut pieces off him before he gave up his secrets.

Secrets were all he had now.

For a brief moment he’d thought he had something more. He’d actually called Jamie and talked about how to ask Dawn to marry him.

He should have asked Jamie how to get his damn hands off a meat hook. The trouble was he could barely touch the ground. His toes wouldn’t quite meet the concrete. He needed something to push off of.

Or something to change the game map.

He let his head hang low as though he simply couldn’t hold it up a second longer. His shoulders ached. Not more than the holes in his abdomen. Oh, these guys were smart. They cauterized the wounds. Hell, one of them had shoved an actual hot poker through his left side. Minimal bleeding, maximum pain. They’d burned the bottoms of his feet and sent electrical charges through his system that made his whole body twist and turn abnormally. He’d been sure his bones would break, but he hadn’t made a sound.

If only he’d listened to his handler about women.

“You know you’re going to break, Ten,” she said in a low, seductive voice.

He kept his head down. He didn’t need to see her to know what she would do. She enjoyed his vulnerability. She liked being the one in charge, got off on his pain when he’d never given her anything but his devotion.

Such a fucking idiot.

He saw her shoes come into view. Red heels. He’d bought them for her in Dubai. They’d spent a day in the world’s largest mall, walking from store to store, and he’d enjoyed indulging her. He’d saved every dime he’d ever made. Dawn was the first woman he’d spent more than a few nights with.

How the boys at the Agency would laugh at him. Franklin Grant would be so disappointed. The men he recruited likely wouldn’t ever respect him again. Ten Smith brought down by a woman.

It would never fucking happen again, he vowed. He’d been an idiot to think he could have what Jamie had. Dawn wasn’t Phoebe. Not even close. Sometime during the night he’d been forced to acknowledge that he was so fucking envious of his brother. So envious that Jamie got the girl, that everyone loved Jamie, that Jamie somehow managed to see all the same darkness and maintain his light. It was exactly why Phoebe had taken one look at the two of them and promptly fallen head over heels with Jamie, never once giving Ten a single glance. No. Not even one.

Dawn had, but he’d been too stupid to see the predator behind those soft eyes.

What Came From the Stars by Gary D. Schmidt
Being by Kevin Brooks
Hunting Shadows (Shadow Series #3) by S.H. Kolee
Blue at the Mizzen by Patrick O'Brian
Scarred by J. S. Cooper
Blowback by Christopher Simpson
The Arctic Patrol Mystery by Franklin W. Dixon
Love, Lucas by Chantele Sedgwick
The Darkening (Dawn of Ascension) by Roane, Caris
Not What She Seems by Victorine E Lieske
Our partner