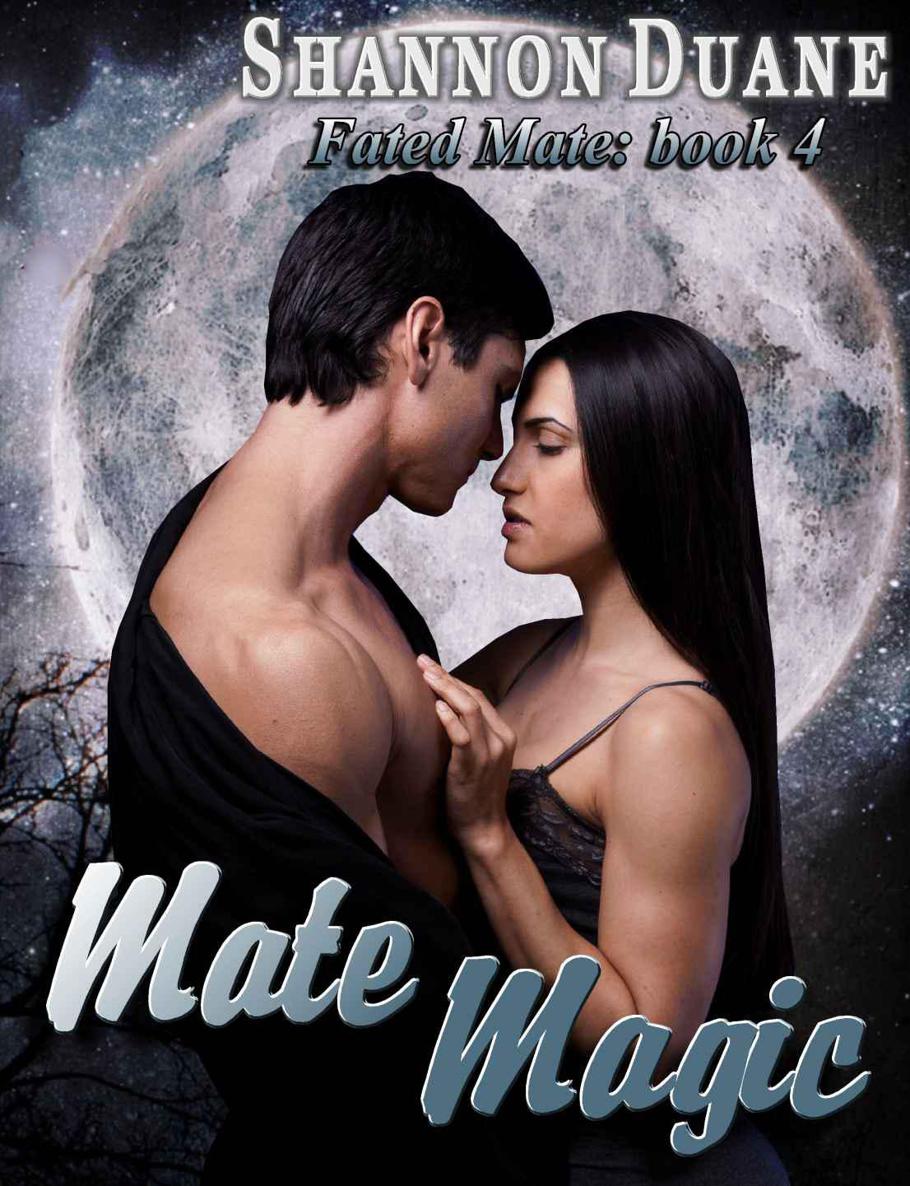 Other books by Shannon Duane

This book is licensed for your personal enjoyment only. It may not be copied or reproduced in any manner without express written permission of the author. If you would like to share this book with another person, please purchase an additional copy or copies. Thank you for respecting the hard work of this author.

Mate Magic
is a work of fiction. Though some of the cities and towns actually exist they are used in a fictitious manner for purposes of this work. All characters are works of fiction and any names or characteristics similar to any person past, present or future are coincidental.

This book is dedicated to my wonderful family who allow me to be obsessive, most of the time. To my three beautiful children, Jay, Mae and Jonas, who tolerate the clicking of my laptop keys at all hours of the day and night. Thank you to my awesome husband, who bought me above mentioned laptop; you could only be better if you did laundry.
Yes, I’m coming to bed soon! Growl.

And thank you to my doggie,
Indiana, who couch cuddles and keeps me company in the middle of the night; until my husband realizes I’m not, in fact, coming to bed and climbs on the couch with me.

“
Allen, people are coming, I can hear them. Please let us go. No good can come of this situation.” Bailey O’Shea was holding her four month old twin niece and nephew attempting to keep them safe from her Pack Alpha, Allen. He had a crazed look in his eye and she’d never seen him look so desperate. He was a major control freak and wanted to breed all wolf shifters and raise them according to the old ways. She pleaded, “I’m sure Dante will keep the kids half time. Just give it a chance.”

Bailey
heard a gunshot and jumped a mile causing the twins to cry.

“Shut them up.”
Allen was pacing the confines of the small room where he had secluded them. He had a knife loosely held in his right hand. Bailey itched to put the twins down and fight him for the knife but her sole responsibility was seeing to the protection of Abby and Brady. When Dante, her twin brother arrived he would have to take care of Allen.

Bailey
was bouncing both the twins in her arms when she heard the second gunshot. She was beginning to think that she may not be on the winning side of this battle. Regardless, Bailey decided she would fight to the death before letting Allen steal these children from a wonderful pack and their mother. Bailey started to put the kids down in a safe place so she could fight Allen if necessary.

Bailey
had leaned over to settle the kids when she felt a tug on her hair. She was still holding the twins when she heard Allen sneer, “You will hold them. I’m not stupid. I’ll not fight you and the twins pack mates. If you put them down I will hurt them.” Allen placed the knife over little Brady, Bailey attempted to pull away but he had a hold of her hair.

“Don’t do this.
I promise not to run or leave if you’ll just leave the twins alone.” She could hear the desperation in her voice and was mildly ashamed.

“What will you give me,
Bailey, if I leave them alone? I want more children, are you willing to sacrifice their safety to ensure that we have pups of our own?”

Bailey
pulled away from him and a clump of her long black hair was pulled out. Allen tossed it to the ground and merely grabbed another section of her hair to tug. She kept pulling away from him and soon her hair was littering the floor. She couldn’t defend herself holding the babies so she simply stood there with his hand gripping her hair so hard her scalp ached.

“Well, my dear, will you breed with me?”

Bailey was saved from answering his question by several people rounding the corner and entering the room. The first person to come in the room was unfamiliar to her but she did notice Tara, the twin’s mother entering next along with another unknown man. How many people had to witness her shame? Dante was nowhere to be found.

Allen
had her straight long black hair held firmly in one hand pulling it back to expose her throat, where he held the cold blade to her skin.

She whimpered as the knife bit into her skin as
Allen started speaking. “Ah, Tara it’s so lovely to see you again. Your children will be a wonderful addition to this pack. Thank you for doing your duty.”

“As you remember I didn’t have a choice.
Please release Bailey and the pups. They are innocent and we’ll do whatever you ask.” Tara regretted the words as soon as they were out.

“Good, leave and I will release them.”
His smile was mocking.

The last man who entered was barely restraining his fury, spoke.
“Let the woman go or I will shoot you without thinking twice.” He pulled his gun and took aim at Allen. He knew what he was doing, his strong legs braced apart and his eyes never straying from Allen. He had dark brown hair and a scowl that didn’t match his beautiful face. He should be somewhere warm and sunny, running wild with his pack.

“Ah ah ah, I wouldn’t do that if I were you.
You could hit this lovely young woman or the children. It would be a shame to lose more of our breeding stock.”

Paul
wanted to kill this man more than he wanted to do anything else in his life. “Release the woman.”

Decker looked over at
Paul. “Hold it together man. Put the gun away.”

Paul
closed his eyes only a moment and took a deep breath of the cotton candy scent he had come to love. He lowered his weapon then asked Decker, “Alright, how would you suggest we proceed?”

Allen
scoffed at them, “Move into the room and away from the door. I’ll release them as soon as I am free.”

Decker countered, “You’ll release them at the door and we will not follow.”

Allen began to move towards the door as the others moved further into the room. “Agreed.”

When
Allen was in front of the door and Tara, Decker and Paul were on the opposite side of the room Allen snickered. He pulled Bailey’s hair back even further to expose her neck before saying, “You are a disappointment to your Alpha, so you will be punished.” He took the blade and attempted to slide it along her neck, however, Bailey knew it was coming so she ducked and turned as the blade connected.

Bailey
felt white hot agony along her neck and collar bone. She could feel the blood dripping down her chest but she crouched down to protect the babies and felt another stabbing pain to her side. Suddenly, she couldn’t breathe but she had to keep the babies safe so she remained crouched over them.

Feeling a hand on her shoulder
Bailey looked up to see Tara crying. Bailey didn’t have much strength so she lifted slightly as Tara took her pups from under her. The two men who had come with Tara were standing back. One smelled like gun powder and blood; he had a bullet hole in his shirt and another in his leg. The beautiful man with the gun was on his cell phone calling someone. She lifted her head to smile at him and let him know she was okay. She attempted to take in his scent, but her breathing was ragged and her head felt heavy; she promptly passed out.

Paul had stayed by Bailey’s side. Apparently, she was Dante’s twin sister and she was hot stuff, smelling like sweet cotton candy and she was brave. She’d protected Dante’s pups like a mother bitch and he was proud of her. If he could just get a little closer to her so he could take her scent deep into his lungs and get rid of the cloying scent of hospital disinfectant.

When they arrived at the hospital the staff tried to kick him out but he growled his displeasure, explaining the circumstances of her assault.
He stood in the corner and silently observed. They cut Bailey’s clothes away and put a gown over her. They took blood, x-rays, put her on oxygen and placed an IV. She was also connected to a monitor that continued to beep annoyingly.

About twenty minutes later the doctor came back in and told him that her labs were okay, except a mild drop in her blood count, but her x-ray showed a collapsed lung which was what the paramedics suspected.
The doctor said he would send in the nurse to prep the room and the procedure would take place in about fifteen minutes. “Why is she still knocked out? Shouldn’t she wake up?”

“She’ll open her eyes to painful stimulus; we’ve medicated her pretty heavily for the pain.
After we have placed the chest tube, which is a painful procedure, we’ll come back and suture her neck. It’s a pretty bad laceration and will need to be cleaned thoroughly before the stitches.”

The doctor left the room and it was only
Paul and Bailey. That was a nice name, Bailey, and she smelled so good. Maybe he could take a look at her wounds and…help. Yeah, he could help. He found himself, unknowingly, approaching her bedside. He placed his hand on her soft black hair and stroked it to soothe her. She opened her eyes. “Perteey.”

Paul
looked down at her, “Are you feeling okay Bailey? I’m Paul, a friend of Dante’s.” Well, he had met Dante, but he wouldn’t necessarily put him in the category of friend.

She blinked slowly and slurred, “
Paul, iz a perteey. Gooooody.”

Okay, she was high. “I’ll stay with you.
I’ll protect you.” He continued to stroke her hair, and soon her breathing evened out to a steady pace and she was lightly snoring. Cute, he thought.

He bent down to get a lungful of sweet heaven.
She smelled so dang good and he wondered how she would taste. Without thinking his tongue darted out of his mouth and he lightly licked her neck. Yep, he had tasted perfection.

The room exploded in chaos the next second, he heard someone yelling and he was hit from behind and knocked off his feet.
He elbowed the intruder in the ribs and threw his head back into the face of the threat to Bailey; he needed to protect her. He turned and what he saw confused him. A large uniformed officer was helping a bleeding Dante to his feet. When the officer moved Dante to the side, he came toward Paul, “Whoa buddy, I’m not a threat. I’m American Canyon Pack and a police officer. I didn’t know it was Dante, I was just trying to protect Bailey.”

Dante yelled while holding his bleeding nose.
“
By licking her?
How noble, your parents must be so proud that you take such good care of defenseless women. Get out and never come back. I don’t ever want to see you sniffing around my sister again.”

Paul
tried to defend himself “But Dante I think…”

“I don’t give a flying fuck about what you think.
I am Alpha here and you will listen or suffer the consequences.”

Paul
, grudgingly, bowed his head and walked to the door. He took one last look at the sweet smelling goddess who had twisted him into knots, and walked out.