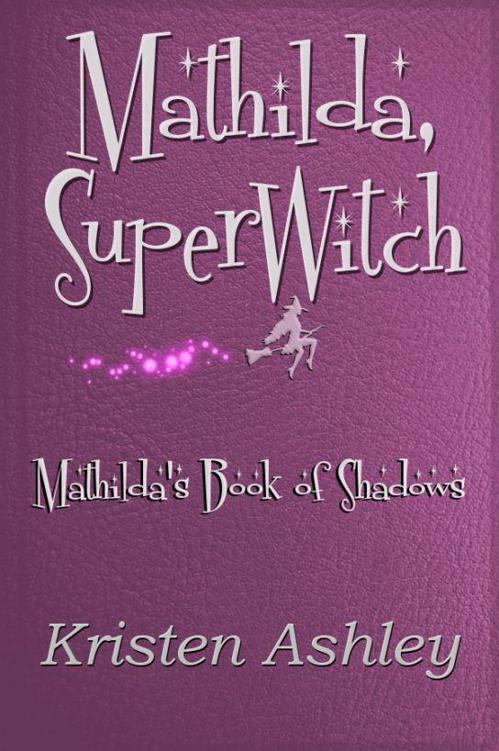 Years ago, when I started writing this book, I did it to entertain my beloved friend
,

Lucinda Ferguson
, after she was diagnosed with cancer.

In the book, I introduced
the character of “Lucy”, a loyal friend, a down to earth person, a movie lover, a great cook, a fabulous wit and a complete love.

But my Lucy never read a word.

So now I’m dedicating this book to her memory.

I make your recipes all the time, my darling Lucy.

I
n the War of the Wooden Spoons you’d win.

Hope you’ve got a decent KitchenAid mixer up there.

The Month of November

The Journal of Mathilda also known as My Book o’ Shadows

Aunt Mavis told me I’m supposed to do this, start a journal, so here goes.

Not kidding, I have magic. I saw it last night shooting right out of my fingertips like pixie dust. Well, actually more like sparkler fireworks mixed with a bit of pixie dust a la Tinkerbell without the wand. Anyway, it scared the bejeezus out of me but what could I do but watch it fly?

Yesterday morning I thought it was all a drunken hallucination from too much vodka and sugar consumed at the Hallowe’en party. Mavis says it wasn’t and told me to chant something, say, “So mote it be” and flip my finger out and there it went – hot pink pixie dust hit the cat right on its backside and… yikes!

Mavis tells me that the Honeycutt family has been witches since before recorded time. Even going so far as saying we were rumored to have something to do with Stonehenge but then she said, “In the end, Stonehenge was just one big joke and not very funny and now they’re going to spend millions of pounds building underground roads and the like to protect it. Inconvenient and a waste of taxpayer’s money! I wouldn’t claim any part of that for the Honeycutts,” and so on but I wasn’t listening anymore because pixie dust just shot out of my finger and I was still trying to cope.

She gave me some books and now I’m up in the Tower Room. I’m supposed to be reading.
History of Great Wytch Families
(it has a whole chapter on the Honeycutts) and
The Honeycutt Book of Shadows, Unabridged, “D” (Dark Dabbling Spells – Dwindle Potion)
and
Celebrated White Witches, Vol. I, Calliope Agglethorpe - Desdemona Honeycutt
(952 pages!).

Witches are supposed to have journals, keep notes, track things like spells and the best directions when using a broomstick and the like. They call them their “Book of Shadows” (which is kind of a cool name, I have to admit).

At least she’s given me this yummy leather-bound notebook (Aspinal of London, very posh, hot pink too, giddy up!). The journal is the best part about being a witch as far as I can tell from what Auntie Mavis has to say.

Honeycutt family has been witches since recorded time.

History does not like powerful witches so Honeycutts have been hunted for many years (!) and only survived because Auntie Mavis explained we were, “Wise, talented and well-protected.” (Seems to me not enough to go on there.)

Have not known of my own witch-hood because am prophesied as being SuperWitch (!!) and therefore had to be protected by covens and secret societies (!!!) until reached an age where I could handle my power (which is now, though I may not agree).

Have been personally watched and/or hunted by bad guys all my life (unknown to me) who want a) to murder me so they can steal my power (Auntie Mavis says that unless they are warlocks, this can’t happen, virtually impossible, even hard for warlocks, although there are many out there who don’t know that) (great) b) to murder me because of the people I’m prophesied to help are meant to go on to do important things (maybe) or c) to murder me so I will just be dead because witches scare people.

Must say, I’m not too certain about any of this. (Understatement.)

I have not shot pixie dust out of my fingers yet today or yesterday so I feel a little better about that at least.

But have been given more background and history about family and myself and talked with Gran and Mom and am feeling a bit strange that they’re so excited to be “out” about “The Craft” and, “Oh Honey, we just can’t wait until you realize your full potential,” blah, blah, blah.

So I have to tell you that I already have a great deal of pressure in life in general considering current state of affairs with the revamp of the café before Day of the Dead announcement so now have SuperWitch/savior-of-world onus on me.

Perhaps I should fill in journal just in case get hunted by bad guys and killed pre-realizing-full-potential so can have my own paragraph (sentence?) in the next version of
History of Great Wytch Families
.

History of Mathilda, SuperWitch in Training

Grew up living in family unit that included Mom (health food store clerk and candle maker for most my life but recently started own line of hand and body lotions). Often stayed with Gran (yoga guru even before it was popular and now very rich and sought after) and two sisters (one older (Viviana), one younger (Ursula) – both practicing witches and kept it from me as am The Chosen One (explains some sibling rivalry issues I had heretofore not understood) so currently not talking to either of them).

Ate lots of granola and took it on the chin with many outfits before got a job at thirteen so I could buy my own clothes and leave tie-dye behind forever.

Did okay in school, went to college and majored in drinking and soap operas (yet finished in four years, now understanding some early magical powers) and graduated and landed a job in retail so could be close to greatest love, Ralph Lauren.

Had many boyfriends all of whom were a) cheats, b) cheats and thieves c) just thieves d) confidence suckers (“You’re going to wear
that?
” etcetera) or e) self-involved, egomaniacal assholes (maybe “e” is independent trait that applies to all the rest).

Struggled with diet and workout regime for many years until made note of important fact that men actually like ass, it’s fashion designers who don’t (and they’re usually gay so why?). This was obviously a relief.

Embraced café society when Starbucks took over the world as life is much better with vanilla lattes in it.

Talents: Can cook and am perfectly willing to tell you if an outfit suits you (or not).

Could use help with: Choosing men and dealing with SuperWitch predicament.

Married to Uncle Otto but I never met him as he left years ago and is not talked about.

I’ve known Mavis since I could remember. She is one of those very cool aunts, the kind who brings you chocolate and tells you not to worry about chocolate causing zits because that’s a myth (probably zapped ‘em… mm, Zapping Zit Spell may be useful). She’s also the kind who thinks all your boyfriends are great and then hates them after you break up with them.

She’s English and lives in a small seaside town in Somerset called Clevedon (where I currently live but am now thinking work visa procured for me by Mavis might be magical and may go up in puff of smoke). Being English made Mavis even cooler because she’s foreign and has a posh accent and my sisters and I could go out and visit and feel cosmopolitan after we came home.

She reminds me of Merryweather from the Disney
Sleeping Beauty
cartoon, dark-haired, short and round (and prefers very tailored, sleek clothing… shame that, would benefit with embracing the Earth Mother Look).

She lives in this big, weird castle-esque type thing on a cliff called The Gables (a Honeycutt piece of property). There is only one place that I’ve known that gives me the same feeling as The Gables – New Orleans. Strange, eerie, dreamlike… once you get there, you never want to leave. It is almost like the place caresses you, yet it feels like it is very warm, comfortable, cozy, safe… and closing in on you, smothering you… and you love every minute of it.

Maggie MacKeever by The Right Honourable Viscount
Jack of Spies by David Downing
Oklahoma Salvage by Martin Wilsey
The Submission Sessions by Teri Fowler
The Island Walkers by John Bemrose
Red Flags by C.C. Brown
The Return of Caulfield Blake by G. Clifton Wisler
Butcher Bird by Richard Kadrey
Map of Bones by James Rollins
Pride After Her Fall by Lucy Ellis
Our partner