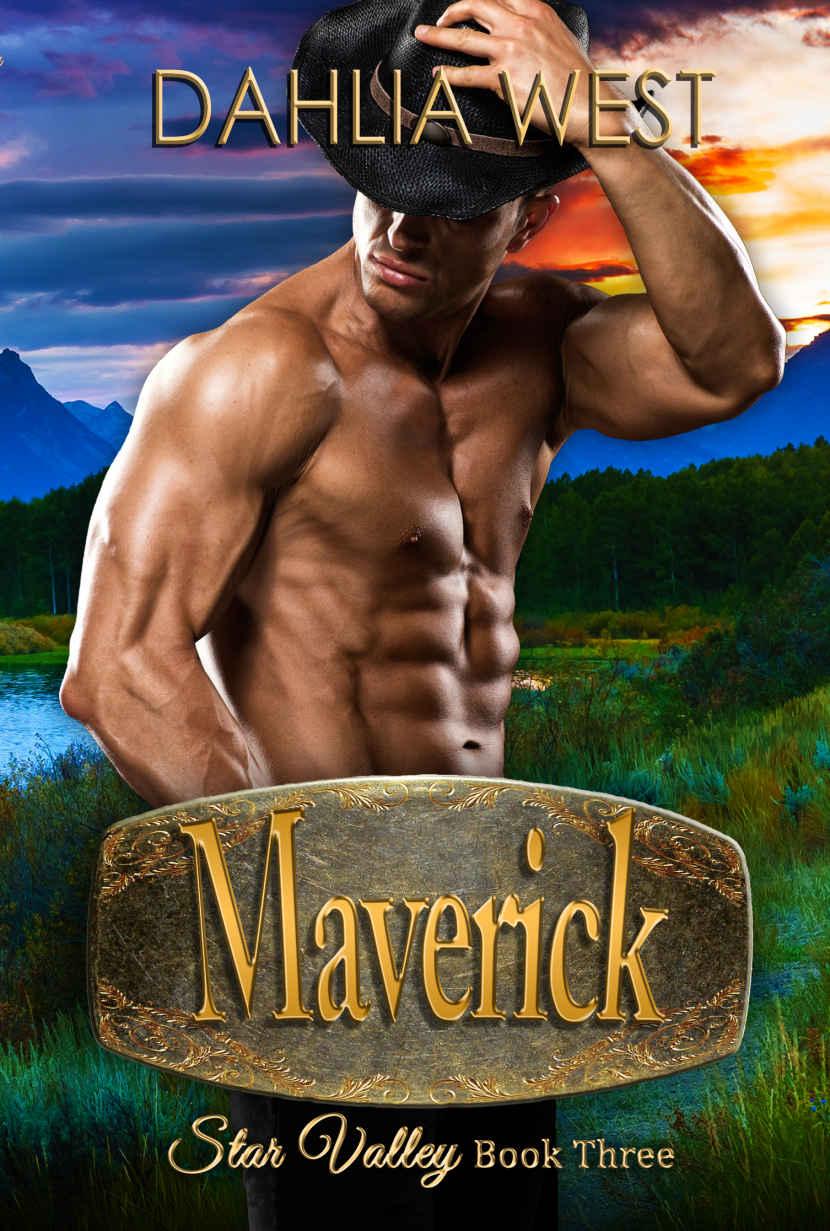 A
ustin Barlow stepped
carefully on the packed earth, gun at his side. He’d eschewed the Winchester rifle strapped to his horse’s saddle, choosing instead to draw out a Smith & Wesson handgun. The grip was black rubber and the nickel-plated barrel gleamed in the sun’s dying light. It felt strange and unfamiliar in his palm, a thoroughly modern weapon that was at odds with his traditional lifestyle out here on the Wyoming range.

He preferred the Winchester, with its finely tuned sights and its ability to take down predators at long distances, before they ever got to him, his horse, or the cattle he protected. Austin frowned at the tracks that led away from camp and headed up the ridge. He’d rather have his rifle, but he was tracking an altogether different predator than the usual mix of wolves, coyotes, mountain lions, and bears that stalked the open range just south of the Grand Teton mountains.

This one wore boots a size smaller than Austin’s size elevens and left sole marks with Carhartt imprinted in the dirt. They all wore Tony Lama’s, for work
and
play, all five Barlow brothers plus Gabe, their ranch foreman. The distinctive curved soles had left their mark on almost every inch of Barlow land, which stretched for miles in every direction. And though the Folly, as he thought of it, was a recent purchase and addition to their spread, the Barlows and Gabe had tread every square inch of it, putting up fence line and clearing away the mining equipment left by the previous workers.

Summer rains had washed away all the bootprints but theirs over these last few weeks since they’d signed the deed and setup camp to transform the land into a sustainable part of their spread. So where had these tracks come from? And why had Austin been noticing them for more than a week now?

Gabe Vasquez was the best tracker among them, but he had no occasion to come all the way up here on the ridge where Austin had been tinkering with some solar power panels he’d placed last month. Gabe’s interest was cattle, not gadgets.

The freshest tracks stopped at the base of the high wall. At the top, out of sight from the ground, were the panels Austin had put up. Rocks and loose dirt covered the trail, as though Mr. Size Tens had tried to climb up to the ridge and failed. Austin snorted derisively. He’d come up here with climbing equipment, harnesses and ropes to install those panels. No one could free climb this wall.

Though that didn’t mean Mr. Size Tens wouldn’t be back with his own rope.

Suddenly, though, a sharp scrape on the rough earth behind him told Austin Mr. Size Tens might already
be
back. He whirled, raising the pistol, and peering down the path into the twilight. To his side, Colter, his horse, didn’t stir, confirming that the movement around the corner of the rock wall was human and not animal. Finger resting lightly on the trigger, Austin held his breath as a long shadow finally loomed around the jagged outcropping of rock.

His heart thundered in his chest, echoing the low rumble that could be heard miles yet away. Austin much preferred facing down a mountain lion or even a grizzly. He’d never killed a man before, never even raised a gun to one. Though he had no doubts about his ability to pull the trigger—to protect his land and his family—he’d lose sleep over it.

He saw boots and a hat and the entire image came together immediately, giving Austin instant relief. Such was his surprise that he forgot to lower the weapon that was now aimed at his youngest brother’s chest.

Austin nearly fumbled the gun, such was his surprise at nearly popping off a round into his sibling. “Jesus!” he gasped at Court. “What are you doing up here? You’re supposed to be down at camp cooking dinner!”

“It’s ready!” Court replied. “And I radioed you, but you didn’t answer. So I came to make sure you were okay.” He eyed the pistol sharply. “Clearly, you’re not. What the hell, Austin? What’s going on?”

Sinking the pistol into the holster hidden underneath the flap of his denim jacket, Austin frowned. Court could be a hothead and stirring up trouble before Austin was certain there was even trouble to be had, might not be the brightest idea. Then again, he’d just pointed a loaded weapon at his brother and sure Austin had four more, but Court would still be a loss, even with his current surly attitude.

“The storm’s interfering with the radio,” he told Court.

Court’s eyes narrowed. “Yeah. That’s kind of what I figured and why I headed up here to let you know.” He waited patiently, which was actually out of character for the young man. His large arms folded across a broad chest that Austin was thankful didn’t have a hole in it.

Austin turned and nodded to the path that extended to his left, the way he’d come. “There’re tracks,” he said, trying to keep his voice even.

Court moved forward and peered at them.

“They’re getting closer,” Austin declared. “There’s just one of them. But they circle around the property line, getting closer to camp, and the old mine.”

Court’s nose wrinkled as he inspected the markings in the dirt. “Everybody’s interested in what’s going on up here. Hell, maybe they think we’re growing a different type of grass.” He grinned up at Austin, obviously trying to make him feel better.

Austin sighed. Nothing was missing or damaged or disturbed. Maybe he was wired a bit too tight.
A different type of grass
, he thought. He could use some of that. Or some tequila. Or a woman. It’d been over a decade since Austin had smoked anything, though, even a Camel. He’d settle for two out of three.

He reached up and tugged at the beard he’d been working on for the last few months. He could get a drink. His money was good. But a woman was out of the question, looking like Grizzly Adams. He should shave it. And drag Court off this mountain, too, and take him to town. They could both use to be around people. He frowned at the tracks, though, because they still worried him.

“This equipment’s too expensive to leave unprotected,” he said, nodding to the solar panels up high on the ridge. “We might need to borrow Rowan’s dogs. To patrol the place.”

Austin felt like a heel having to bring up Court’s ex like that, knowing it was a sore subject. But if anyone spent too much time up on this mountain, it was Court. No one said it out loud, but it was obvious to everyone that Court was hiding away from the world rather than having to face it straight on. His ex had married their brother, Seth, and there was nothing Court could do about that.

The only reason Austin—or Walker, or Sawyer, or anyone else—hadn’t kicked Court’s ass for acting like one was that Court had thrown himself into raising the little girl he shared with Rowan, being a better father than he’d ever been a partner to the girl’s mother.

Court had cheated on Rowan, but never on little Willow. The brown haired, brown eyed girl was the spitting image of her daddy and Court devoted all his free time to being with her, every minute. Court, it seemed, only had eyes for his daughter. To
everyone’s
surprise.

Tugging at his own beard, Austin realized that even if he could manage to drag Court to town and hit The Silver Spur for a drink, Austin himself wouldn’t stand a chance looking like something that crawled out of the mine. “Let’s head back to camp,” he declared, because even if Court agreed to dip his toe into a hot shower—along with the rest of him—it wouldn’t be tonight.

The rain started to fall before they even made the camp’s perimeter. Austin pulled up his collar and ducked his head low into his jacket. It was chilly at this elevation, even though summer was in full swing. It was dark, too, which made the bobbing of lights approaching them from the north side all that more distinct.

Through the sheen of water coming down on them, Austin peered into the dark. The lights were low to the ground, too low for a truck. And no one at Snake River, not even Sofia the cook, drove a car.

“You know who this is?” he called to Court over the thunder.

The car trundled through the mud and pulled to a stop just as Austin reached for the pistol tucked into his waistband. The driver barely had time to round the front of the car, which Austin could now identify as a Toyota, before the man caught sight of the danger he was walking into. He had an umbrella, a prissy little thing, with pinstripes.

The man froze and gazed through the downpour, taking a moment to recognize the silhouette of the gun. “Don’t shoot!” the smaller man howled. “Oh, my God! Don’t shoot!”

Austin glanced down at the man’s shoes. Wingtips, not boots, and the toe was too pointed. They didn’t match the tracks he’d seen up on the ridge. That didn’t mean much, though. He was still a stranger on Barlow land.

“I’m from the Wyoming Rancher’s Association!” the man spluttered while reaching into his blazer.

Claiming His Witch by Ellis Leigh
The Blood Oranges by John Hawkes
Light of Epertase 01: Legends Reborn by Douglas R. Brown
The Lost Throne by Kuzneski, Chris
The Caliph's House by Tahir Shah
The Invisible History of the Human Race by Christine Kenneally
The Terror of Living by Urban Waite
Across the Rio Colorado by Ralph Compton
Island Beneath the Sea by Isabel Allende
Niebla roja by Patricia Cornwell
Our partner