Max Swings for the Fences 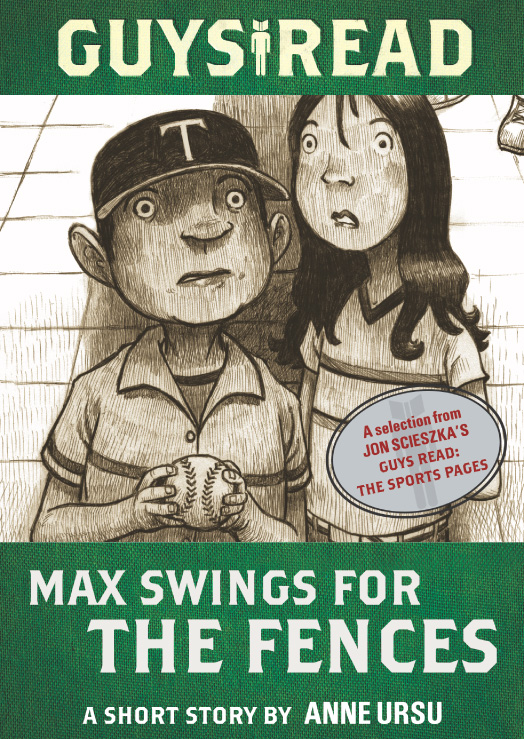 Max Swings For the Fences

A Short Story from
Guys Read: The Sports Pages 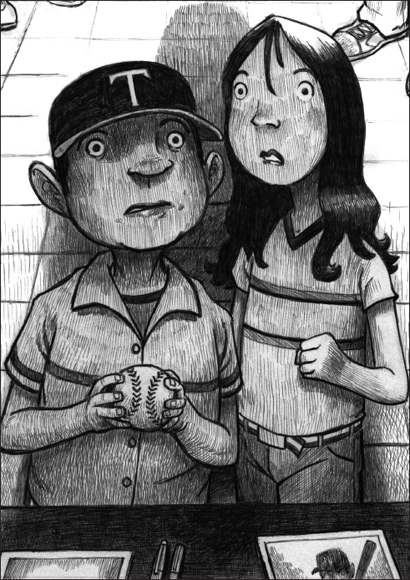 I
t wasn't as if Maximilian Funk didn't know that things were going to go badly. After all, there's no good that can come out of being a new kid in school, especially when you've just moved halfway across the country, especially
especially
in the middle of the year. Nothing says
Give me a wedgie and hang me from the flagpole
like waltzing into a new middle school in February at a time when there are no other new kids to hide behind.

He knew things were going to go badly. If he knew just how badly they were actually going to go, though, he would have faked some illness that would keep him out of school for the rest of the year. Like Ebola.

So Max slowly got ready for his first day at Willard Middle School, spending more time than anybody ever had trying to decide whether it would be better to wear a sweater and T-shirt or a sweater and button-down shirt. He just wanted to get it right. Max had spent his middle school life thus far working hard to be the sort of kid no one ever noticed, except perhaps to say “Oh, I didn't see you there.” Because there were only two ways to get noticed in middle school, and Max was never going to be the kid who got noticed in a Good Way, like if he were a basketball stud or did something amazing like winning an ice creamâeating contest or solving one of Mrs. Bjork's extra credit word problems. So that left the Bad Way. Better not to be noticed at all.

When he got downstairs, his mom presented him with a Minnesota Twins cap, flashing him a huge I-know-I-ruined-your-life-but-I-bought-you-this-fabulous-hat-so-it's-all-better-now smile. “Now you'll look like a native,” she proclaimed.

Max frowned. He did not wear baseball caps. Baseball caps only served to emphasize his ears. Which were already doing a fine job of emphasizing themselves.

“Mom,” he said, not trying to keep the exasperation from his voice, “baseball hats are for jocks. I can't stride in there pretending I'm a jock.” Middle school kids could smell posers like a T. rex could smell a lame triceratops. It was a biological fact.

“Come on, honey. Don't be nervous. Everyone's going to love you.”

“It's February, Mom. Nobody cares.”

“Of course they care!” she said. “You have so much to offer them!”

Max tried to keep from rolling his eyes. Every mother thought her kid was extraordinary. By definition, at least 75 percent of them had to be kidding themselves.

“Anyway,” she added, putting the cap on his head, “this town's nuts about baseball. Just tell everyone at school you're from Beau Fletcher's hometown. They'll think you're a celebrity!”

Max sighed. Beau Fletcher was the veteran All-Star third baseman for the Minnesota Twins, a two-time MVP, future Hall of Famer, and the greatest thing to come out of New Hartford, NY, ever. People in New Hartford said Beau Fletcher's name with this dazed reverence, like he'd invented soup or something. It didn't matter whether he was a nice guy or anything. All that mattered was that he hit a jillion home runs. After Beau donated some money to help rebuild Roosevelt High's athletic fields, there was a movement to rename the school after him. After all, what had Franklin Delano Roosevelt done for them lately? In New Hartford, Beau Fletcher mattered so much that the universe needed to make people who didn't matter at all just to keep everything in balance.

And then it was time to go. Max's dread followed him to the car. It huddled its overgrown body into the backseat and kicked Max's seat the whole way to school. It lurked behind him as he went up the steps to the school and through the doors and down the hallway following the signs to the main office. And then, right before Max went in, it wrapped him up in an icy, immobilizing embraceâand then disappeared suddenly, leaving him all alone.

And that's when everything changed.

Because in the main office stood a woman, and next to her was a girl. And she was the most beautiful girl Max had ever seen. The girl had long, thick, wavy hair like a mermaid might have. And it was a rich, dark red, the kind of color that should only exist in a Crayola box or maybe a very special kind of slushie. And her eyes, her eyes were green like emeralds. Or Kryptonite.

“This is your official new student buddy,” the woman, who had apparently been talking for some time, said. “Molly Kinsman. She's in sixth grade too.”

“Hi, Max,” Molly said, smiling a smile that would need no orthodontia. “I'm going to show you your classes and stuff, okay?”

Max opened his mouth but couldn't come up with a response. This was the sort of girl who would never pay attention to him unless she was assigned to. Her eyes were so green. Who did they remind him of?

“Catwoman!” he thought. Except he said it out loud. His mouth hung open.

The girl blinked. “What?”

He closed his mouth. Molly gave him a curious look, then led him around the school. She chatted as she showed him his locker, the gym, the library, the cafeteria. And Max just followed, nodding and grunting like an ape desperately trying to hide the fact that it'd just been body-switched with a sixth-grade boy. But, he reflected, at least nodding and grunting was better than babbling. If he started talking, who knows what ridiculous thing would come out of his mouth next?

Molly dropped him off at his homeroom. “So, come find me in the cafeteria at lunch, okay?” she said brightly. “You can sit with us.”

And then she turned and left, her invitation hanging in the air.

Max stared. Did she really want to hang out with him? Or was this just part of her job description?

Max sat through his first three periods wishing he were a different sort of person, the kind who might impress a girl like Molly, the kind who had anything interesting about him at all. If Molly thought he was cool, then surely the other kids would too. And then they wouldn't string him up on the flagpole by his underwear. There was a lot at stake.

Plus, then he'd get to hang out with her.

At lunchtime, he surveyed the cafeteria, and his eyes instantly found Molly's red head as if drawn there. His stomach flipped.
Don't blow it
, he told himself as he walked over.
This is your chance. Ready, Freddie
.

Molly was sitting at a table with a blond girl and a tall, dark-haired boy. Max gulped. The boy looked like the wedgie-giving sort.

Max sat down and attempted to look interesting.

“Oh, do you like the Twins?” Jenny asked, nodding to his hat.

“Oh, well, you know,” Max said, “my mom gave this to meâ¦.” He cast a look at Molly. Should he play it like someone who loved baseball or someone who didn't really care that much? Was Jenny looking at his ears?

“Dude,” said Logan, leaning in suddenly. “What position do you play?”

“Uh,” Max looked around. Molly and Jenny were staring at him expectantly. “What do you mean?”

“What do I mean?” He nodded to Max's hat. “Baseball. Practice starts today!”

Of course. Logan was clearly a crazed jock who naturally assumed everyone around him was always thinking about baseball just because he was. Max looked at the girls but couldn't read them.

“Baseball?” he said. “It's February! There's snow on the ground!” There. That was a good, noncommittal answer.

“So?” Logan asked, looking at him as if he'd said fish sticks were best when made out of people.

Logan straightened. “
We
didn't lose anything. Last year's sixth graders did. But we're going to get it back this year. We have the best pitcher in the city.”

“That's you, I assume?” Max said, half to himself. He knew this boy's type.

There was that look again. “Naw, dude. I'm shortstop. What about you?” He looked Max up and down in a way that reminded him of the way his mom picked out tomatoes in the grocery store. “We really could use a left fielder.”

No one seemed to know what to say to that. Everyone suddenly looked down at their trays.

“I mean, I like baseball and everything,” Max said quickly. “But I'm not very good at it. You know.” He looked at Molly and laughed in what he hoped was a charmingly self-deprecating manner. “Everyone says I throw like a girl!”

The two girls turned their heads toward him slowly. Logan let out a long whistle.

Max grimaced. He'd just made himself sound like a total loser. “I mean,” he said quickly, “I play tennis.”

“Tennis. You know.” He mimed a forehand for their benefit. Max actually had a very good forehand. But this is the sort of thing that's hard to show in mime.

Logan scrunched up his face. “My
mom
plays tennis.”

Max did not know what to say. Many people's mothers played tennis. It did not mean there was something fundamentally wrong with the sport itself.

“Anyway,” Logan said, “I gotta run to the library. See you later, Molly, Jenny. And”âhe turned to Maxâ“you too, Venus!”

Logan looked at him, and then a smile spread across his face, and it was the most delighted evil smile Max had ever seenâsort of like how Lex Luthor might look if he unwrapped a present Christmas morning and found the keys to global thermonuclear destruction.

He left. Max looked at the two girls, who were distinctly not looking at him.

And then silence, great and terrible, and Max felt himself fading into the wall, and along with it, all his prospects for a happy middle school life. Jenny shifted, then said she better go to the library too and got up and left, giving her friend a look that told Max that Molly was definitely hanging out with him because she was assigned to. He stuck his fork in his mac and cheese and attempted to jiggle it.

“So,” Molly said after a pause, “where'd you move here from?” Her voice sounded flat. Max didn't understand. Was the tennis thing that dumb?

And then Molly looked up at him again. “Did you â¦ know him?”

And there was that spark in her eyes againâMax might even go so far as to call it a glow. And it would be a terrible terrible thing to extinguish that glow again; why, Max didn't think he could live with himself.

As he talked, he was aware that his sentence was a runaway train picking up speedâbut it didn't matter, for Jenny appeared again behind them just then to derail it.

“Hey, Molly,” she said, “do you want a ride to practice after school?”

“Practice?” Max said, still choo-chooing on. “For what?”

There are times in a boy's life when it is wise not to speak the words in his mind. But Molly's hair was the color of a cherry slushie, and Max was not wise.