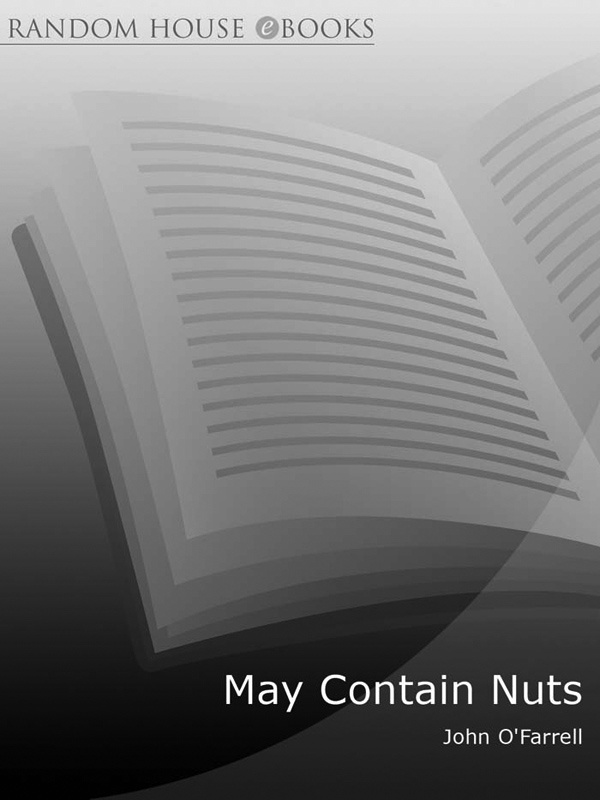 Published 2005 by Doubleday
a division of Transworld Publishers

The right of John O'Farrell to be identified as the author of this work has been asserted in accordance with sections 77 and 78 of the Copyright, Designs and Patents Act 1988.

All rights reserved. No part of this publication may be reproduced, stored in a retrieval system, or transmitted in any form or by any means, electronic, mechanical, photocopying, recording, or otherwise, without the prior permission of the publishers.

Papers used by Transworld Publishers are natural, recyclable products made from wood grown in sustainable forests. The manufacturing processes conform to the environmental regulations of the country of origin.

For Sally, Tom and Anna

John O'Farrell
is the best-selling author of two previous novels,
The Best a Man Can Get
and
This Is Your Life
, and a memoir,
Things Can Only Get Better
. His weekly
Guardian
column has been published in two collections,
Global Village Idiot
and
I Blame the Scapegoats
. He now regularly appears on radio and television in such programmes as
Have I Got News For You
and
Grumpy Old Men
. His work has been translated into over twenty different languages, though frankly how the gags work in Norwegian is anyone's guess.

The Best a Man Can Get
This Is Your Life

I used to be such a cautious woman. David said I was the only person he knew who read the Microsoft License Agreement all the way through before clicking on âI accept'. And yet there I was about to make a bold stand on behalf of mothers everywhere. For ten minutes I had been crouching behind a parked white van, waiting for the right moment to shove a little boy out into the path of a speeding car. It had to be done; you have to teach them a lesson. Obviously it wasn't a real child, I'm not some kind of nutcase. It was a model boy on the end of a long stick.

We lived on a long straight road in south London, and young men in throbbing cars regularly tore past at two hundred and fifty miles an hour. At least, I presumed they were young men. It was hard to tell through those tinted windows; maybe when I screamed âSlow down!' that was an elderly nun who always stuck a single digit out of the car window.

I had fantasized about pulling a chain of tyre-piercing steel spikes across the road, or having David dress as a policeman to stop them, confiscate their car keys and ask them if they felt
the need to drive that fast because they had a microscopic penis. I had written to the council demanding road humps and speed cameras and all sorts of other traffic-calming measures, but I couldn't wait any longer. I had come up with my own solution. I would construct a life-size model of a child and attach it to an old broom handle. When that BMW raced past I could thrust the pretend child out between the parked cars and he'd have to brake suddenly and then I would calmly step out and explain: âSee? See what might happen if you carry on driving like that?' and he'd be so relieved that it hadn't been a real child, so grateful, that he would humbly agree never to drive so fast down our road again.

âWhat are you doing?' David had asked as he came down into the kitchen to find me stuffing scrunched-up newspaper into a pair of Molly's old tights to make the legs.

âRight. I'm not even going to ask.'

âIt's like a scarecrow. Except this is a “scare-car”. If speeding motorists spot a child about to cross the road, they'll automatically slow down.'

âI'm going to position it peeking out between parked cars and then motorists will slow right down as they go past.'

I pulled an old pair of Jamie's school trousers over the tights and began attaching them to the stuffed torso. I could feel my husband's eyes boring into the back of my head, but I didn't look round.

âWhat, you're just going to leave him out on the streets on his own, are you?' He made it sound as if this would be wildly irresponsible parenting; as if the model child might be abducted by a model kidnapper.

âNo â I'll be nearby â¦' I said, failing to include the
detail that I'd be holding the child on the end of a pole.

I inserted a bamboo spine to prevent him repeatedly flopping at the waist like a pre-school children's TV presenter and gave him one of Jamie's old school caps, a pair of gloves and some old Start-rite shoes that swung about on the end of his bendy boneless legs. The face was a problem. Among the masks at the joke shop there was a choice between Mickey Mouse, a witch, the devil, Frankenstein and Tony Blair. None of them looked particularly like a startled child.

So at ten o'clock I had taken up position beside a builder's van parked right outside our house. I crouched in front of the bonnet, waiting for an approaching maniac. A net curtain twitched over the road. Ten minutes on, I was starting to get dizzy from crouching so long between the cars. People were driving too sensibly; it was quite infuriating.

The model looked unnerving in Jamie's old clothes. It occurred to me that if I'd had this idea a few years earlier I could have taken a model child on a stick in place of little Jamie on his first day at nursery. At least then he wouldn't have nearly been knocked over in the playground like that. I'd wanted to say to those big scary four-year-old boys, âStop running around â can't you see you're frightening him?' In fact, I did say that to them, but they didn't take very much notice.

Finally the car approached, the black BMW with the tinted windows and an exhaust pipe so inconsiderate and deafening that you could barely hear the jumbo jets roaring overhead. I felt my adrenalin surge as this arrogant idiot tore down the road towards me. How dare he show such contempt, I thought to myself. How dare he risk the life of my children, I raged as the macho roar of his approaching engine reached a crescendo. As two tons of steel drew level with me, I
dramatically thrust the model child out into his path to force him to slam on his brakes.

A lot of things seemed to happen simultaneously, although I perceived each of them separately like the distinctive notes that make up a musical chord. There was a dangerous-sounding screech of tyre-rubber on tarmac accompanied by a startlingly loud car horn and then almost immediately the loud thud of metal on metal, repeated twice very quickly and accompanied by the leitmotif percussion of breaking glass. Another vehicle's car alarm was set off, which incidentally kept exact time with the electrical bass drum that continued to throb from inside the BMW. Oh, and then I burst into tears. And all the blood had gone from my legs from crouching down for so long, so that I tried to shout at the driver while sort of half squatting at the side of the road.

David picked me up from the police station four hours later. I was charged with being reckless under section 1 of the Criminal Damage Act (1971), told I'd have to go to court and might even face a prison sentence. Our neighbour's car was an insurance write-off; another would cost over a thousand pounds in repairs to the bodywork. The offending driver didn't even get charged with speeding, so it shows you how much justice there is in the world. David later joked about how the driver's police statement made quite entertaining reading. He managed to get a copy of it, which is now framed in our downstairs loo.

At around ten a.m. on 27th March, I was driving down Oaken Avenue in a southerly direction at approximately thirty miles an hour. Suddenly right in front of me on the end of a long
pole appeared a four-foot-high model of Tony Blair dressed as a public schoolboy. I instinctively swerved, striking a parked car, though still hitting the figure with my nearside wing, which decapitated the dwarf Prime Minister model, sending his head up over the windscreen. I struck a second car before coming to a halt, which was when I saw Mrs Alice Chaplin holding the now headless torso on the end of a wooden pole. She was crying and crouching at the kerbside and began shouting at me, âSee? See what happens!' I realized that I had caused significant damage to two parked motor vehicles and I immediately called the police.

In the end I got off with a fine, and we had to pay for the damage to his BMW and the two vehicles in our road plus the cost of hire cars during repairs. David never told me the total amount, though he did float the idea that I might sell one of my kidneys on eBay. The young man, who had been very aggressive and rude to me immediately after the accident, swearing and shouting and calling me a âmentalist', got himself another black car, a Lexus I think David said it was. But he never cut through our road again. And I bet he doesn't go quite so fast any more. Who knows â there might be a little child out there somewhere who is only alive today because my model four-foot-high Tony Blair laid down his life on his or her behalf. That's got to be worth it, hasn't it? One of the policemen had been convinced that I'd been making some sort of anarchist political statement and kept asking if I had ever been on any anti-capitalist demonstrations. I said no, I vote Liberal Democrat and my children go to Spencer House Preparatory School.

The court case seemed to make me something of a heroine
with all the other parents at school, for which I was very grateful because I'd always felt a little bit of an outsider. âWeren't you scared?' asked my friend Sarah as the framed statement was passed around my living room one Saturday morning.

âTo be honest, I never really thought about what might happen afterwards. Anyway, it's no big deal, any normal mother would have done the same â¦' I shrugged, putting down a tray of coffee and biscuits.

Sabine by Moira Rogers
I Know What Love Is by Bianca, Whitney
Naked Moon by Domenic Stansberry
Both Sides of the Moon by Duff, Alan
Whiskey Beach by Nora Roberts
Personal by Lee Child
Orb Sceptre Throne by Ian C. Esslemont
In the End by S. L. Carpenter
The Shadow of Reichenbach Falls by King, John R.
The Thirteenth by G. L. Twynham
Our partner