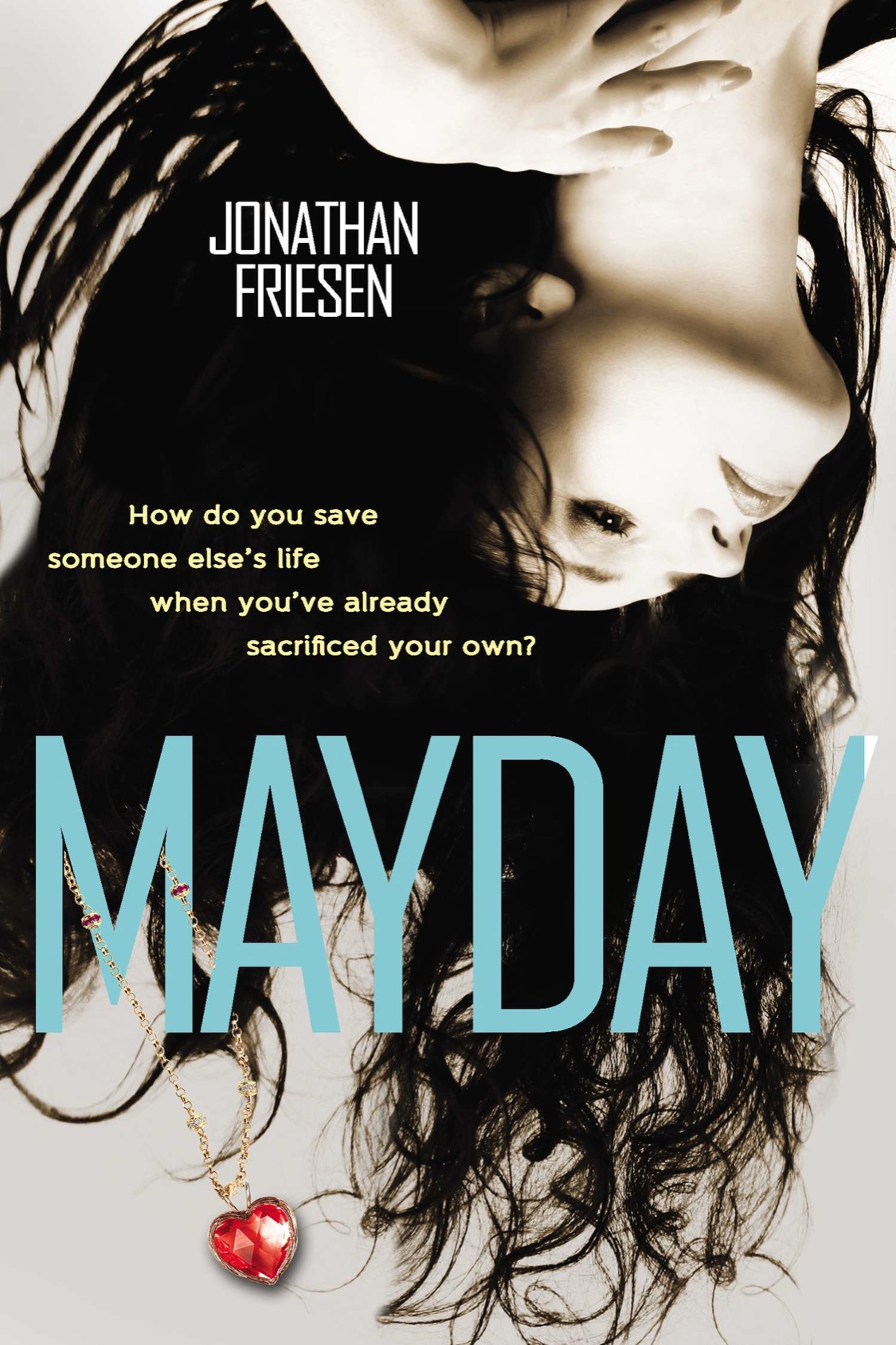 Lightning crackled, and the silhouette of Adele slowly walked away with Mom's arm around her shoulder. Adele. One hellish minute had changed her world. She believed in me, counted on me, and I had failed her, let a monster lay hands on her. I could make Addy's life right.

I could stop both Maydays from happening.

“Take me back,” I whispered. “Real back. Real everyone-can-see-me back.” I glanced over my body. “Take me back to April. When I was thirteen. Just before Mayday.”

Sadie raised her eyebrows. “You want to be thirteen? That would place you in middle school? What was so important?”

“Spunk you never lacked.” Sadie thought a moment. “April of your thirteenth year? So be it. You'll be needin' these.” She handed me newly knitted mittens. “Minnesota can still be cold in spring. Now go on. Best hop in back and get changed.” 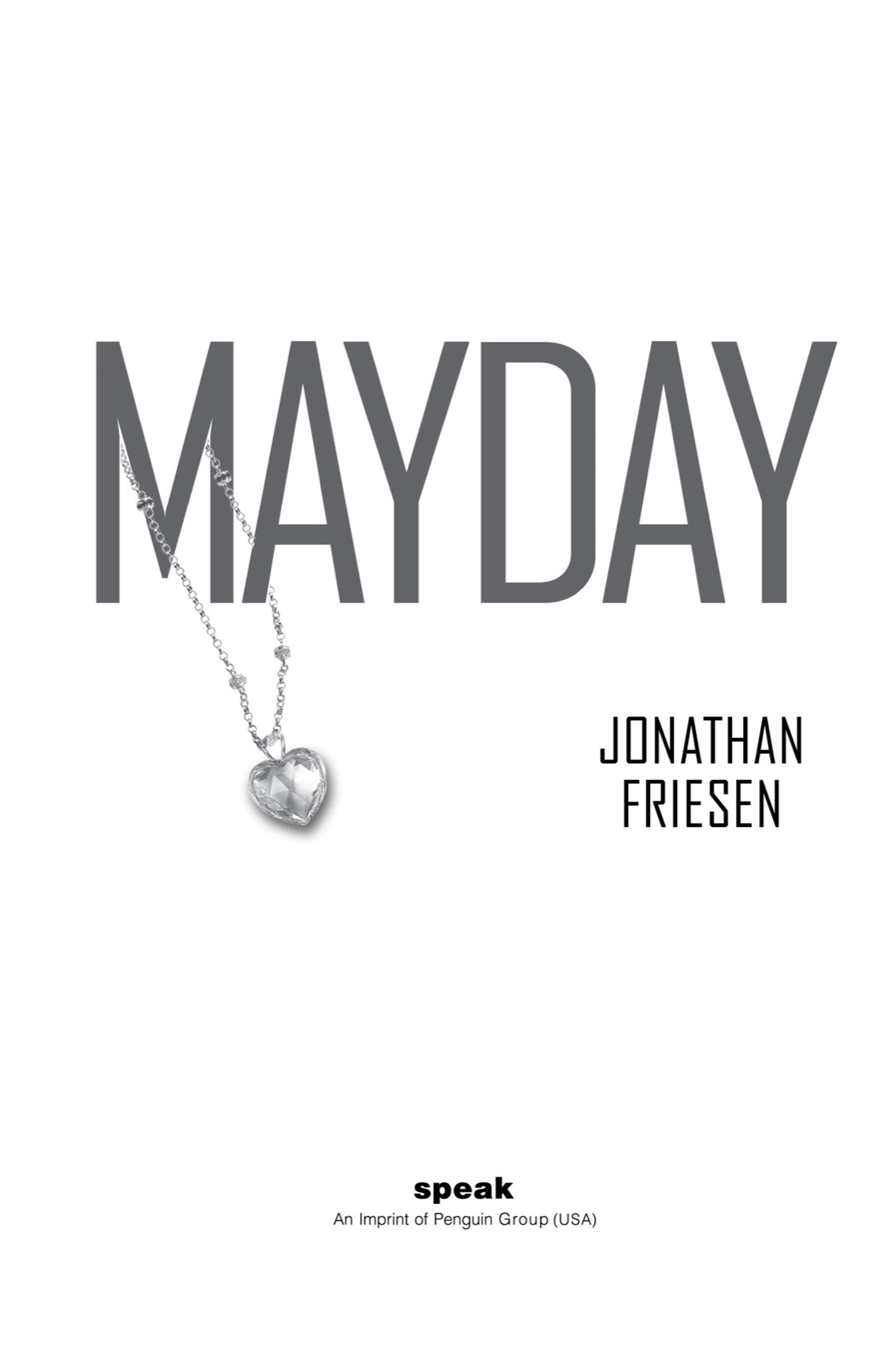 Published by Speak, an imprint of Penguin Group (USA) LLC, 2014

THE LIBRARY OF CONGRESS HAS CATALOGED THE SPEAK EDITION AS FOLLOWS:

Mayday : a novel / by Jonathan Friesen.

Summary: “Seventeen-year-old Crow has devoted her entire life to protecting her sister Adeleâeven putting her own life on the line. But when an attempt to rescue Adele from a suitor puts her soul into a limbo between life and death, Crow is given a chance to inhabit a loaner body to go back and change the past”âProvided by publisher.

Let's start with where I'm not.

I'm not in a dark tunnel walking toward a bright light.

I'm not drifting toward heaven, looking down on my body.

I'm seated in the front of an ambulanceâaloneâwaiting. I'm not sure if this is a normal rest stop before the long trip; I've never died before.

A series of notebooks spreads across the dashboard. On the cover of each, the scrawl of green permanent marker. Josh, Gertrude, Jordanâeach tablet has a name. Mine simply says Crow. There are no instructions, but when I saw the pen that rested on the driver's seat, I knew what my notebook was for.

I'm writing out my life. Maybe someday everyone has to give an account. Maybe this is how it's done. Maybe this is how secrets leak back from the other side, and end up newspaper headlines. Addy, please, if the insanity of my last weeks reaches your hands, read it through with an open mind. Don't be afraid of what you'll discover. I want you to know it all.

I didn't love you well, sis. I didn't know how. You have every right to remember me as a freak or a philosophical head case. Both are true. But for me, it's time to own up, and as I don't know where this ride ends, this may be my last opportunity.

I know you don't like reading Nietzsche, but he got this one right: “The complete irresponsibility of man for his actions and his nature is the bitterest drop that he who understands must swallow.” It's hard to accept what I did, harder still to accept how I hurt you and the others. So after you read this, please share it with all those concerned.

Here's what I did.

Here's why I did it.

I'll start at the beginning, which, of course, was my end.

Please remember I loved you, 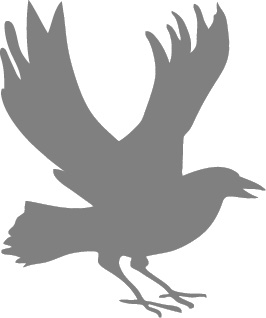 THE THOUGHTS OF C. RAINE

I DON'T RECALL MY FIRST TRIP TO REGIONS HOSPITAL.

From information pieced together later in life, I know it was an odd, but otherwise unremarkable, visit. Dr. Ambrose displayed a curious affection for the forceps, and tugged me, the raven-haired girl, from Mom, who likely would've approved the use of a tow truck had it separated the two of us quicker.

Dad's role was much smaller. Unstable man that he was, he fled Mom's birthing screams and spent most of her labor pacing and muttering in a lobby. Upon news of my arrival, he returned to perform a birth's supreme act of symbolism. He muscled dull blades through the purplish umbilical cord, forever severing the maternal bond.

“Your father was so proud of youÂ .Â .Â .” Mom said many years later, before rubbing her face and turning away. “For one hour. It didn't take him long to decipher what type of child you would be. Wailing always did him in.” Here, she paused to offer an exaggerated sigh. “You know how fragile he was.”

Actually, I did not. Dad was my hero until the day he left, his return the object of my hidden hopes long after. But Mom's sigh achieved its desired shaming effect.

By all accounts, I cried for twenty-six hours straight. Never had those scrubs encountered a child with so much will in the lungs. The newborn nursery staff housed me in a torture chamber renamed the Circumcision Room, where I became the world's youngest boarder. It boasted soundproof walls, and my internment there was a nursely attempt at mercy toward other, less-vocal newborns. Mom visited at feeding times. Dad peeked in then quickly fled my noise. And somewhere, in between all those comings and goings, a name appeared on my bassinet: Coraline.

It's a pretty name, and Dad alone used it. One of the scrubs in the nursery saw to that. She removed my pink hat, stroked my black hair, and sang lullabies to her “Little Crow.” Mom heard her singing and my cawing, and the name stuck. I entered life pre-nicked.

On Day Three, the hospital evicted me. Dad pulled the Volkswagen into the turnaround. Mom received her ceremonial wheelchair ride to the curb, her arms laden with flowers and balloons.Â .Â .Â .

But no child. I followed at a distance, borne by an anxious scrub, no doubt concerned that a parental escape was somehow in the works. She stuffed me into my mom's arms; Mom stuffed me into a car seat; and after all that stuffing, the Raines brought home their colicky baby, who owned a scream that shredded any remaining hope of their marriage's survival.

I don't believe my final hospital visit was as commonplace.

Train-car collisions were rare. That Will survived the collision was rarer still. My prospects, as driver and recipient of the impact, were much more tenuous. Using the persuasive doctor jargon Dr. Ambrose must've learned in medical school, he became more forceful by the day as he discussed my bleak outlook with Mom.

“Your daughter will not wake up. Her brain activity is below the baseline for recovery. The humane choice is to let nature take its course.” Read into those comforting words: Flip the switch. Pull the trigger. Kill your girl.

As much anger as I carried toward this doctor, it struck me that he was in a surreal position. He had brought me screaming into the world. Eighteen years later, he had the chance to silently usher me out.

Ambrose and all the scrubs spoke in hushed voices, scared that Lifelessâan apt name for my bodyâmight overhear. They stared and spoke in mock horror, as if they couldn't believe it had happened.

But even more than that, they wondered, like you wondered, where I really was.

I was right there in the room. Did you ever sense my presence? Could you feel my gaze?

I trailed Nurse ICU to the employee exit, listened to her and the other scrubs giggle and laugh and joke about the Unthinkable:

“Why don't they pull her plug?”

That's when I spit in her double latte. Did she taste it? Likely not. I tasted nothing either.

How does a disembodied soul spend its days? This you'll soon see. But initially, there was plenty of time to sulk, and question.

What is a soul, anyway? You'll remember how I spent time thinking about that, how the concept of an invisible center bothered me. I never became comfortable with the idea of a soul.

Descartes didn't either: “But what then am I? A thing that thinks. What is that? A thing that doubts, understands, affirms, denies, is willing, is unwilling, and also imagines and has sensory perceptions.”

Foolish man. As if senses are nothing.

One thing I knew: to a soul, to me, senses were everything. They were what fresh air and blue sky are to a prisoner, what running and leaping are to an invalid.

The numbness of a floating soulâhow do you bear the emptiness? It was a stupid philosophical question until I experienced it. Then, the desire for touch overpowered all else and consumed my every thought.

Except for one. As I stared at Lifeless, I still felt the connection, and the idea sickened me. An invisible umbilical cord stretched from it to meâwrapping around my midsection. Not even Dad's shears could cut me free. Though I tried to leave its room, I couldn't stray far from Lifeless.

And when it dreamed, I dreamed.

And the dream was always the same.

The Memento by Christy Ann Conlin
For the Love of Sami by Preston, Fayrene
Bound by Bliss by Lavinia Kent
Impeached: The Trial of President Andrew Johnson and the Fight for Lincoln's Legacy by David O. Stewart
Sleeping Love by Curran-Ross, Sara
The Alexandria Quartet by Lawrence Durrell
Longing for Home by Kathryn Springer
Flynn, Joyee - My Angel Cheetah [Purrfect Mates 4] (Siren Publishing Ménage Amour ManLove) by Joyee Flynn
The Vampire Hunter's Academy: The Darkness by Delizhia Jenkins
THIEF: Part 6 by Kimberly Malone
Our partner